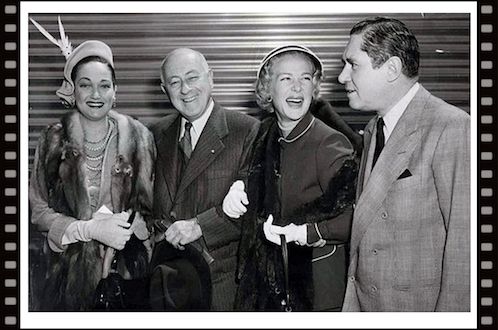 Dorothy Lamour, Cecil B. DeMille, Betty Hutton and John Ringling North ready to board the famed Super Chief at Los Angeles Union Station. They are heading east to film Oscar winning Paramount production of "The Greatest Show On Earth."

As president of the Ringling Bros. Barnum & Bailey during the heyday of the famed Big-Top and traveling circus which will have its final performance tonight in Long Island, New York, John Ringling North received a rather modest salary.  But what North might have been lacking the substance of a millionaire, the consciously displayed the form. North in his Cadillac Limousine on the phone as he is driving through Manhattan. The limo, stored on the train, and chauffeur accompanied him on the entire circus tour.

North was a glittering anachronism whose social and professional activities evaded the traditions of such rococo sports as “Diamond Jim” Brady, “Bet a Million Gates” and his own prodigious uncle, John Ringling North. North starring up at a portrait John Ringling, his uncle, and namesake, at Ca’ d’Zan, the former family home and now a museum, in Sarasota, Florida. Ringling invested in railroads, oil, real estate and any number of other enterprises, including Madison Square Garden, where he became a member of the Board of Directors and major investor. In 1925, his personal wealth, holdings, and companies were estimated at nearly $200 million or $2.8 million in today’s dollars.

North was a glittering anachronism whose social and professional activities evaded the traditions of such rococo sports as “Diamond Jim” Brady, “Bet a Million Gates and his own prodigious uncle, John Ringling North. Charles Heston with John Ringling North on the platform of his private Pullman railway car Jomar in Sarasota Winter HQ for the circus in the early 1950s. North with Warner Bros. star Ann Sheridan relaxing in the observation lounge of the Jomar during a 1940s Los Angeles playdate.

From the 1930s into the 1960s, he was one of the last few men in America who maintained private Pullman cars. In 1917, John Ringling North’s uncle bought a new, 82-foot Pullman that, at that time, was said to be the longest railcar ever made. He named it Jomar, an acronym for John and Mable Ringling. The car was rebuilt many times with North modernizing, mainly the interior to meet his requirements since he used if for up to 9 months at a time. North relaxing in the observation lounge of the Jomar while on tour with the circus in the early 1950s.

Dining Salon on the Jomar. Crockery, table ready for a formal dinner party and North having breakfast.

The Jomar, named after his aunt and uncle, was a silver-painted pleasure dome, 82 feet long, in which North lived both on the road and in winter circus headquarters in Sarasota. North with Bette Davis and her husband William Grant Sherry. Onboard the Jomar during a 1940s Los Angeles playdate. North is entertaining them with other guests and his brother in the bow tie. John Ringling North the Circus King doing his juggling act for Bette Davis and her husband.

The Jomar’s observation drawing and dining room were scenes of epic festivities in all the great cities in the USA where the circus was touring. Partakers numbered such college mates of North (Yale, Class of 26) as Columnist Lucius Beebe, Crooner Rudy Valley and New Yorker Cartoonist Peter Arno who was hired as the circus “art director” to create dozens of delightful drawings for the souvenir program groups. Prince Zalstem-Zalessky, a nobleman of Russian descent, and his wife, Princess Evangeline Johnson Zalstem-Zalessky, the last surviving child of Robert Wood Johnson, were frequent traveling guests on the Jamar.

In his drinking habits, North exceed even his own rococo standards. “The same drink in a row bores me,” he would confide to his guests. John Ringling North at the bar!

He would use the Stork Club bartender manual, authored by his friend, Lucius Beebe, to go from Alexander to a Perfect Rob Roy and onto a Zombie. Many nights the cycle continued uninterrupted till dawn without any visible effect on his digestive system or equilibrium.

His exclusive salon on wheels required the full-time of a valet, a chef, maid, and chauffeur.

The Duke and Duchess of Windsor at the Circus.

This bacchanal M.O. took place in almost every major city on the route, where North entertained everyone from the Duke and Duchess of Windsor to Vice President “the Veep” Albin Barkley, on the 10,000-mile transcontinental circus tour.