LATEST
Home > ALL POSTS > J. D. SALINGER (Catcher In The Rye) was a cruise director aboard Swedish America Line’s MS Kungsholm in 1941… 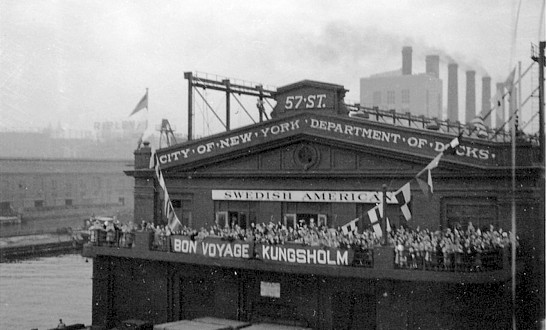 J. D. SALINGER (Catcher In The Rye) was a cruise director aboard Swedish America Line’s MS Kungsholm in 1941…

Cruise History: Catcher In the Rye’s J. D. SALINGER was a cruise director aboard Swedish America Line’s MS Kungsholm in 1941… MS KUNGSHOLM on Caribbean Cruise – by 1941, with the war in Europe, most liners were not crossing the Atlantic.

“The young man—his name was Ray Kinsella, and he was a member of the ship’s Junior Entertainment Committee—waited for Barbara at the railing on the portside of the promenade deck. Nearly all passengers were ashore and, in the stillness and moonlight, it was a powerful place to be. The only sound in the night came from the Havana harbor water slucking gently against the sides of the ship. Through the moon mist the Kungsholm could be seen, anchored sleepy and rich, just a few hundred feet aft. Farther shoreward a few small boats corked about.” J. D. Salinger – A Young Girl In 1941 With No Waist At All – Mademoiselle 25, May 1947, pages 222-223, 292-302

In 1941, the position of entertainment director for the Swedish America Line’s M.S, Kungsholm (built in 1928) was held by Salinger.   He authored a number of short stories with the Kungsholm or a “liner” as the setting.  The official Swedish American Line website documents Salinger’s position aboard the Kungsholm.  He made one cruise.

Mr. Salinger would go on to become a world-renown author with the publication of “The Catcher in the Rye” in 1952.

Salinger was undoubtedly the Kungsholm’s most famous crew member.

Salinger also used his shipboard experience aboard the M.S. Kungsholm in his New Yorker short story “Teddy” (republished in his collection Nine Stories) which takes place on an ocean liner – and can be viewed by clicking here. Heading toward Jamaica in 1929 on-board the MS KUNGSHOLM. Many filmed sequences aboard ship. Also, great scenes of Jamaica. Cruising The Past –  A 1929 cruise aboard Swedish America Line’s MS KUNGSOLM from Sweden to the Caribbean. From Worldcruiser2 at Youtube. The video is from home movies of a Swedish couple sailing in 1929. The cruise The musical score is dramatic to say the least. Many scenes aboard ship. Very elegant – right before the Great Depression. J. D. Salinger (Cather In The Rye) was cruise director aboard the MS KUNGSHOLM in 1941.

MS Kungsholm was a passenger liner owned and operated by the Swedish American Line from 1928 to 1941 on transatlantic services from Gothenburg to New York as well as crusing out of New York. It was built at the Blohm & Voss shipyard in Hamburg, Germany. In 1942 the ship was requisitioned by the United States Government, who placed it United States Lines flag, and renamed it USAT John Ericsson (NY-307).  Following the end of World War Two the John Ericsson was sold back to the Swedish American Line in 1947. Instead of returning to service SAL it was sold to Home Lines in 1948 and renamed MS Italia. With Homes Lines the ship served on a variety of routes, including Genoa—South America, Genoa—New York, Hamburg—New York, Hamburg—Quebec, New York—Nassau as well as cruises from New York to the Caribbean. In 1964 the ship was sold to Freeport Bahama Enterprises for use as a floating hotel under the name MS Imperial Bahama. In 1965 the Imperial Bahama was scrapped at Bilbao.