LATEST
Home > ALL POSTS > Immigrants, Tourists and Students sailed on the Dutch Victory ships during the 1950s 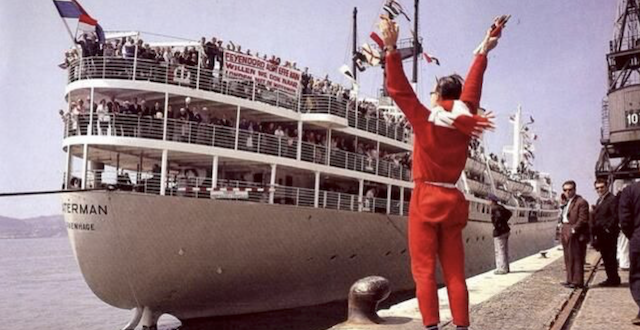 The SS Waterman sails from Rotterdam.

Immigrants, Tourists and Students sailed on the Dutch Victory ships during the 1950s Along with the Zaiderkruis and Waterman, she brought many immigrants to North America and Australia. On the trans-Atlantic runs, the ships carried 40 First Class passengers with a limited number of accommodations. Dr. Zbigniew Brzezinski and his wife in First Class on board one of the Dutch Victory ships.

First Class accommodations were provided so the ships could secure low tourist class rates from the Trans Atlantic Steamship Conference. She could accommodate 830 passengers in Tourist Class accommodations ranging from cabins to dormitories.

She transported thousands of immigrants to the United States (New York City), Canada and occasional runs to Australia from all parts of Europe.

The Groote Beer sailing from Amsterdam to Australia in the 1950s carrying Dutch immigrants.

She made regular stops at Halifax, Nova Scotia’s Pier 21 (Canada’s Ellis Island), and to Quebec City and Montreal with Holland-America Line as her agents.

She was also popular with students and tourists who wanted rock bottom cheap voyages during the late 1950s.