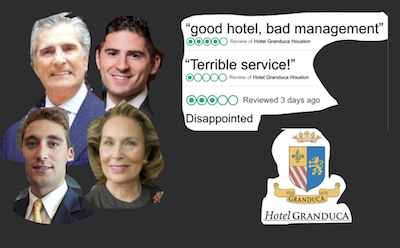 Hotel Granduca – A 5 star hotel slips because of bad management!

The best service at the Hotel Granduca is from the excellent Housekeeping Staff and the Valet Parking Services. Room Service waiters are excellent. Restaurant and bar are okay. As for the front desk… it’s a lottery… The Granduca’s owner Giorgio Borlenghi is still doing his dreary pitch about his fabulous hotel every-time you watch TV which is housed in the room’s ancient Amore.

As for the front desk and concierge, it is inconsistent. I had a two-room suite and requested that it be quiet since I was working in the room during the day. The look worked decades ago but it is very passé and clumsy. It reflects the out of touch decorator along with the owner’s tastes. Look at the size of the old-fashioned TV that features the endless diatribe of the megalomaniac owner.

The suite was cluttered with a lot of small pieces of furniture. Bedding was excellent, along with bathroom linens and toiletries which were five stars except for the bathtub which has a very high rim and is small, could fit a large child, which is used as a shower and an invitation to slip and fall accidents.

Every time you turned on the TV you had to endure the pretentious pitch of Granduca hotel owner Giorgio Borlenghi going on about how great this hotel was until you could cut him off and find something to watch. There was also an old-fashioned clock radio in the bedroom that had had URL plugs that you could find using the flashlight from my cell phone.

There was an honor bar with no scotch. The hotel claims to be “International,” but it is strictly appealing to Texans who demand two kinds of bourbons. So if you order a scotch from room service, it is $40 a shot including tip. The help in the bar service was okay. No other staff topped the excellent service of the valet, bellmen and housekeeping personnel. You can stock the kitchen area which is convenient. Jonathan Rosen, the Granduca UT whiz kid frat type manager who wants to learn the hotel business. He should ask the Housekeeper who should make him start cleaning toilets.

Rosen according to his Linkedin profile is a recent business major grad at UT Austin (2013). He expresses an “interest in hotel management” in his bio.