LATEST
Home > ALL POSTS > Horrifying Murder of an Actress on a Cruise Ship – Death, Sex and Lies on the high seas! 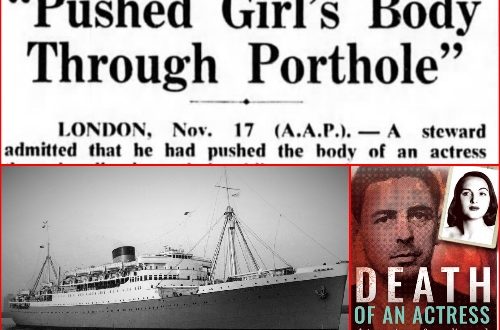 Horrifying Murder of an Actress on a Cruise Ship – Death, Sex and Lies on the high seas!

Murder, suspicious deaths and disappearing at sea aboard liners from Cunard to Union-Castle have made cruise history.   The romantic decks of “The Love Boat” can be a very dangerous place.

As for cruising the past, history finds there were two or three murders supposedly linked to Cunard Line’s RMS Queen Mary before WW 2.  Another murder during the winter of 1933 a certain Mr. Poderjay most likely smuggled his dead wife aboard the liner RMS Olympic in a trunk and disposed of her out of a porthole.

THE STEWARD AND THE STUNNER

Then in 1947, a decade later, another ship, another porthole, and another body hit the headlines.  This time there were be no doubts about what really happened.

There is no doubt stunning, red-haired actress Eileen (Gay) Gibson was shoved out a porthole of Cabin 126 on B Deck into the shark-filled Atlantic as the Durban Castle plowed a steady 18 knots off the west coast of Africa. After all, handsome and muscular promenade deck steward James Camb, 30, admitted doing the shoving.

But there were still many tantalizing questions about what happened between the skirt-chasing steward and the vivacious Gibson, who took the stage name Gay when it simply meant happy. 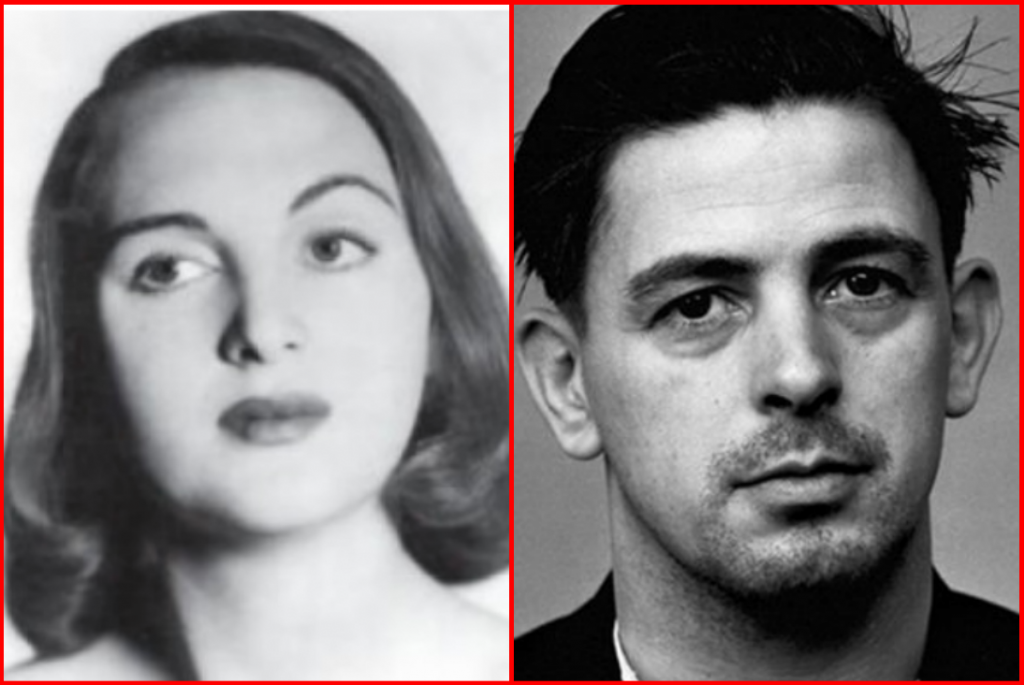 Actress Gay Gibson, the victim, steward James Camb, the killer and the “death ship” Durban Castle. A first-class passage from South Africa that turned from lust to murder aboard a cruise ship of the past.

Was Gibson wearing her black silk pajamas as she hurtled 25 feet into the sea? It was an important question raised at Camb’s trial. But there was no thought of tragedy aboard the Union Castle line ship en route from Cape Town to Southampton, England, that stifling night of Oct 17, 1947.

The voluptuous Gibson poured into a black evening gown with silver shoes, had dinner in the saloon with Frank Hopwood, an official of the shipping line, and another passenger. She was her merry, flirting self. A dance followed, and Gibson, 21, had two or three drinks. 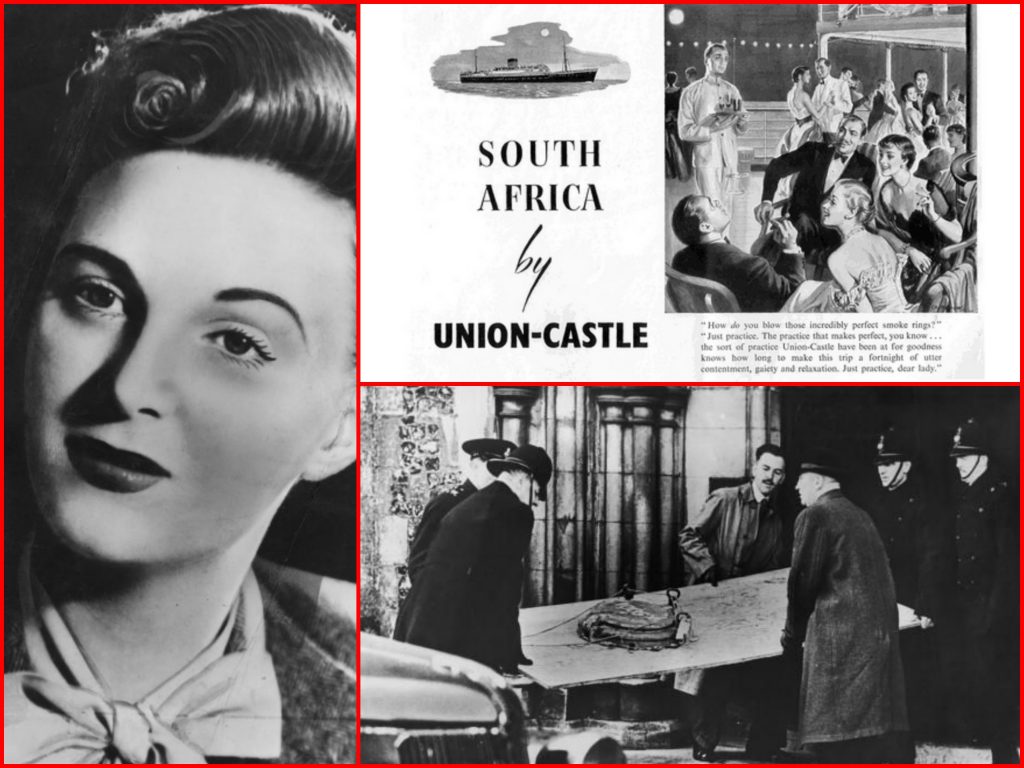 She returned to her cabin at 12:40, then was spied on the after deck alone at 1 a.m. At 2:58 a.m., watchman Frederick Steer saw red and green lights flash on his galley panel. This called for both a steward and a deck steward for Cabin 126. Usually, one or the other was summoned. Steer went to 126. He knocked and tried the door. It opened just 2 inches and was slammed.

But he saw a man’s face that of Camb, called Valentine by the crew because of his boasts of womanizing. Steer went to his superior, James Murray, on the bridge but, not wishing to get a fellow crewman in trouble, he did not report that the man he saw was Camb. The officer dismissed Steer, telling him the morals of the passengers were their own business. 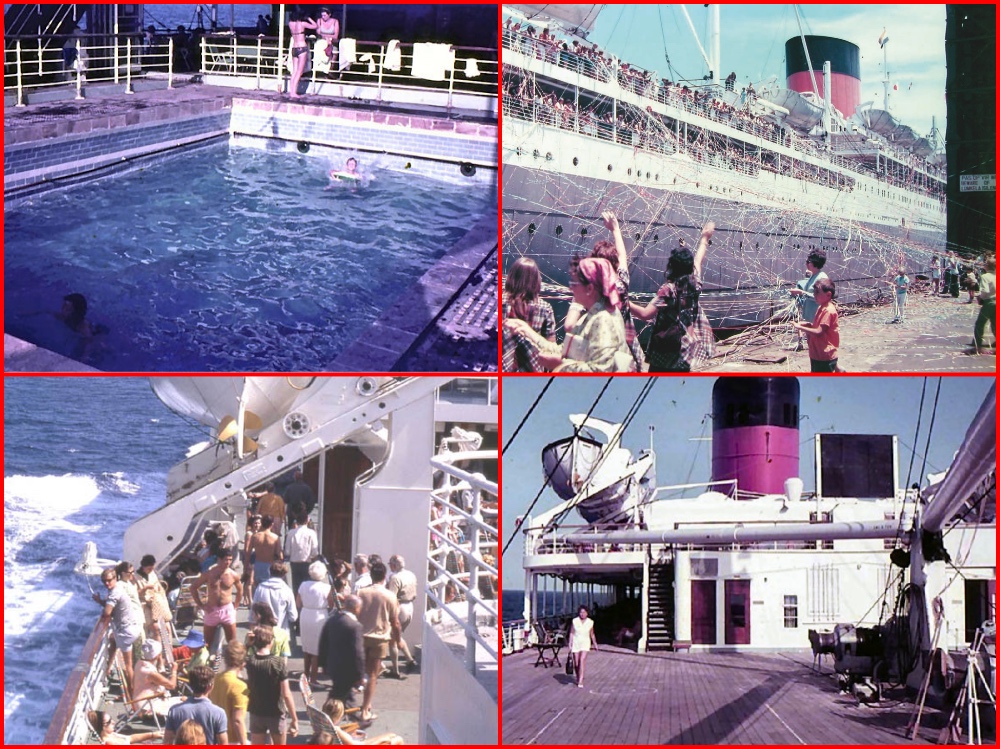 At 7:30 that morning, stewardess Eileen Field found Cabin 126 empty. She saw the disheveled bed, with several small bloodstains on the sheets, and the open porthole. Field noted that the actress’ black PJs and yellow dressing gown were not in their usual place.

She reported all to the chief steward. Soon the ship’s public address system paged Gibson. She had made a hit in a Johannesburg play and was on her way to London to press her luck on the stage there.

When Gibson did not answer the page, Steer went to the captain, A.G.V. Patey. He told him of the call lights and of opening the door to No. 126. “Sir,” he said. “I glimpsed a face. Camb was in the cabin, sir.” Patey shouted, “You mean that deck steward, James Camb?” Told “yes,” he summoned Camb. “What were you doing in Cabin 126 last night?” the captain demanded.

I KNOW THE RULES

Camb flushed, said, “Why, I wasn’t in 126. That’s Miss Gibson’s cabin. Nor have I been in any other passenger’s cabin. I know the rules, sir, and I obey them.” In dismissing Camb, the captain asked him, “Where did you get those scratches on your neck?” “A harsh towel, sir,” he replied.

The skipper summoned Camb’s roommate and learned that the steward was not in his cabin at 1 a.m., but he was there, sound asleep, at 6 a.m. Patey asked the ship’s surgeon. 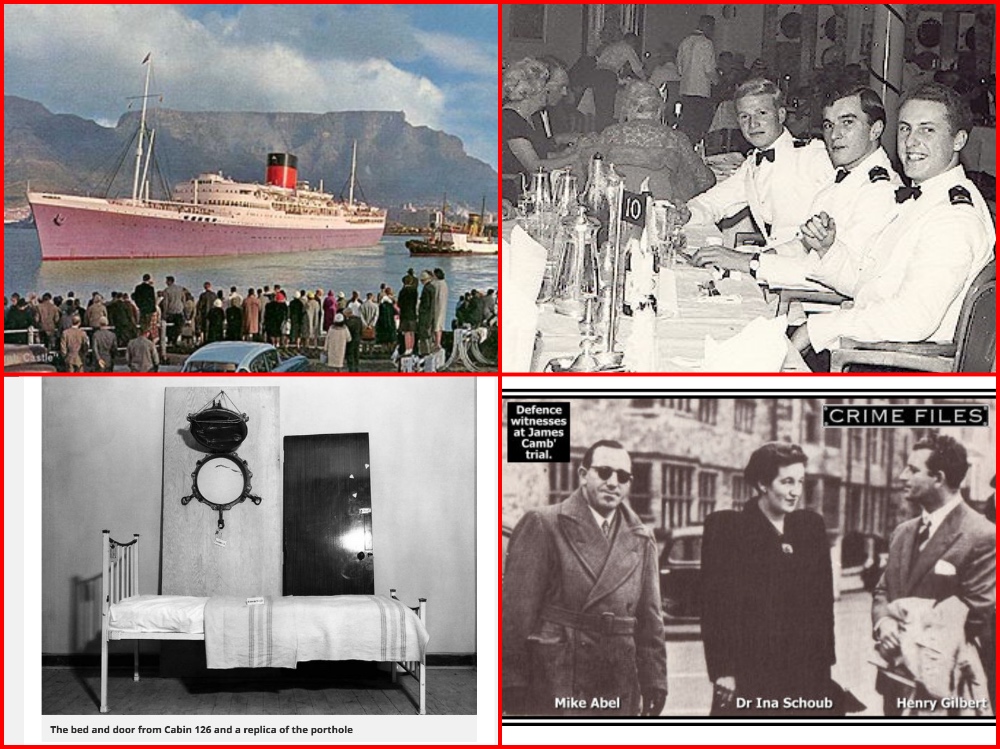 Dr. Anthony Griffiths, to examine Camb. Besides the scratches on Camb’s neck, the doc found 10 more on the shoulder and right inner wrist. Camb blamed the rough towel for the facial scratches. The shoulder he said he did not know about The wrist was from heat rash scratching, he said. The doctor told Patey he thought the scratches were not self-inflicted. At Southampton, Scotland Yard took over.

After repeated denials, Camb finally told Detective Sgt John Quintan: “All right it was this way: At 2 a.m. Gay let me into her room. He had earlier sought a date. We talked about the dullness of the ship’s dances. She was lying in bed. I saw she had nothing under her yellow pajamas. I slipped into bed beside her. “Then an intimacy, you might call it took place.

With, of course, her consent “Suddenly she clutched me and was foaming at the mouth. Then she was very still. I couldn’t find a heartbeat” Camb said he tried resuscitation and was interrupted by the watchman at the door. After bolting the door, and fearing Steer had seen him, Camb said he found Gibson limp and lifeless. 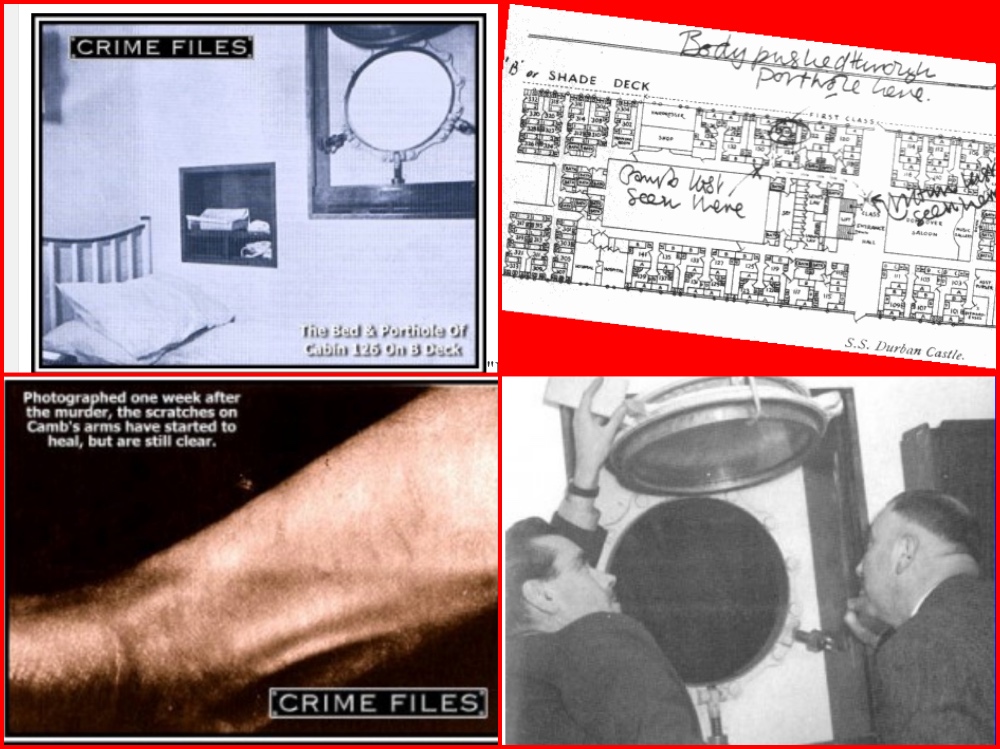 “So far as I could tell, she was dead,” he said. “I was frightened. All I could think about was getting rid of the body. I managed to push her through the porthole.” Camb said he never hit the call buttons, nor did Gibson, so far as he knew.

On March 18, 1948, Camb, married and the father of a girl went on trial for his life in Westminster Castle, Southampton. G.D. Roberts, for the crown, told the jurors they might conclude that Gibson, objecting to Camb’s advances, touched the call buttons and scratched Camb and that he, in self-preservation, throttled her.

Or, he added, they might conclude that Camb overcame the woman and got rid of her so she could not press charges of rape or attempted rape. If the woman died a natural death in his arms, as he said, why did he not allow her to be found dead the next morning?

Roberts asked. What happened to Gibson’s black pajamas in the ship 90 miles off the Ivory Coast? Roberts asked. Camb said the woman was not wearing them. “He didn’t see what she wore under that robe,” thundered Roberts, “because he never was intimate with her. She fought him off and he killed her.”

Ellen Victoria Gibson, the actress’ mother, testified that her daughter was in the best of health. Defense Attorney J.D. Casswell attacked her in cross-examination. He tried to paint Gibson as promiscuous. : “Didn’t she have an affair with a man named Pierre while in Germany entertaining British occupation forces?’

Casswell asked. “She knew a Pierre, but she wasn’t interested in men, only in her theatrical career,” the mother replied. “Did you know your daughter sought a doctor, in South Africa to see if she was pregnant?” asked the counsel. “My daughter was not pregnant” she replied. “Well, can you explain the contraceptive device found in your daughter’s suitcase in her cabin?” the attorney asked.

“University students carry them,” she replied. Camb took the – stand. He branded a liar an officer who said the steward had admitted he had his hands around Gibson’s neck when she died. Camb insisted Gibson’s death was natural.

For 69 minutes, Roberts tore at him. Did he not realize that Gibson’s body would have been the best proof that she died naturally? the prosecutor asked. “Yes,” the defendant admitted. “Then why did you destroy it?” Roberts pressed. “I didn’t think of it “at the time,” Camb answered.

In closing, Roberts asked the jurors, in reference to the contraceptive found in Gibson’s bag, “Wouldn’t she be wearing it if she expected a 2 a.m. bedfellow?” It took the jury 45 minutes to convict Camb, and he was sentenced to death.

However, the abolition of the death penalty was being kicked about the British Parliament at the time, and Camb’s sentence was changed to life in prison.

Camb was paroled in 1959; he changed his name to Clarke and was working as a head waiter in May 1967 when he was convicted of sexually attacking a 13-year-old girl. He was, incredible as it may seem, merely placed on a two-year period of probation. He later went to Scotland where he worked once more as a head waiter in a restaurant.

A short time later he was charged with sexual misconduct with three schoolgirls; this time Camb’s parole was revoked and he was returned to prison to serve out a life term.