YOU TUBE VIDEO – CRUISING THE PAST – Part One of a Holland-America Line promotional film for Trans-Atlantic service aboard their new flagship TSS ROTTERDAM. The narration is in Dutch. Great views of the wonderful Rotterdam. 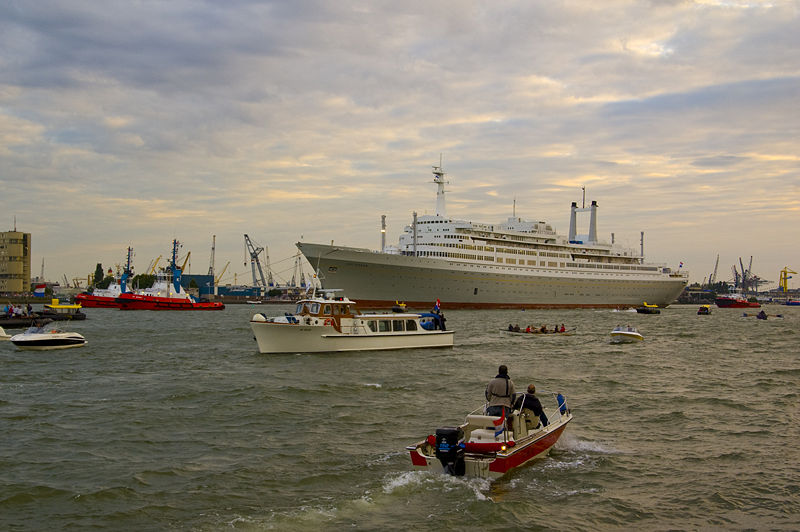 The fifth SS Rotterdam, known as “The Grande Dame”, was launched by Queen Juliana in a gala ceremony on 13 September 1958, and completed the following summer. The Rotterdam was the last great Dutch “ship of state”, employing the finest artisans from Holland in her construction and fitting out process.  With a career spanning forty years, she was also one of the most successful passenger ships of all time. She sailed from 1959 until her final retirement in the fall of 2000. 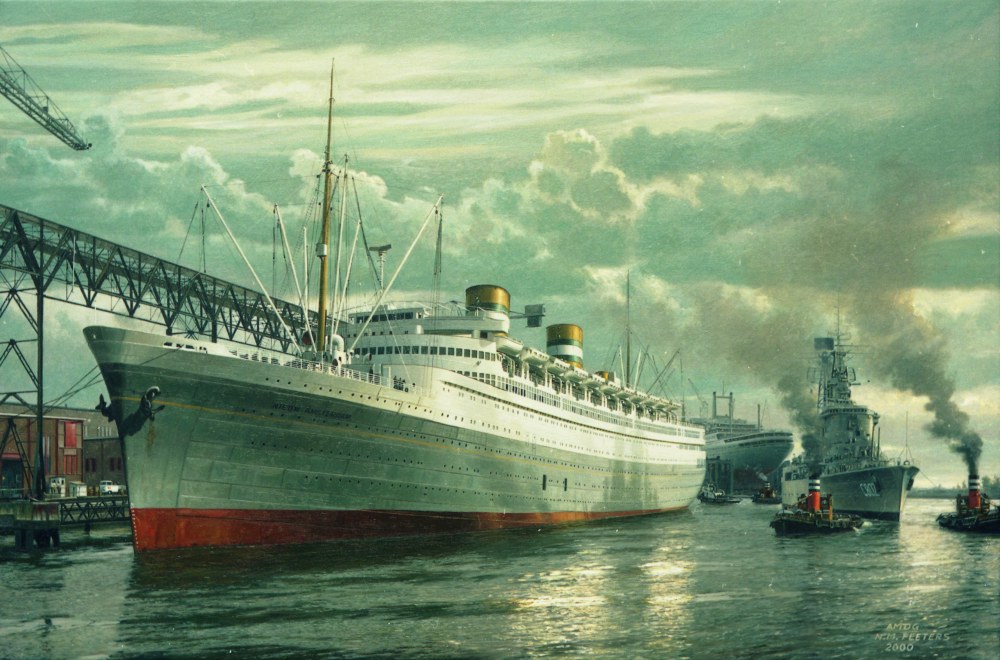 Originally she was conceived as running mate to the popular SS Nieuw Amsterdam launched in 1937, but work was put on hold at the outbreak of World War II in Europe. When economic conditions once again became favorable for completion of the new ship in early 1954, the beginning of the end of ocean liners as basic transport was visible on the horizon. The designers took this in mind and created a groundbreaking vessel, a two-class, horizontally divided ship with movable partitions and a unique double staircase allowing for easy conversion to cruising. Rotterdam’s machinery was shifted aft, to the now-traditional two-thirds aft position, and in lieu of a funnel twin uptake pipes were fitted. To provide balance, a large deckhouse was built atop the superstructure in the midships position of a typical funnel. While very controversial at the time, Rotterdam’s appearance became groundbreaking, and her unique design features can be found on cruise ships today.

After retiring from transatlantic service in 1969, the ten year old Rotterdam got a small refit for permanent cruising and began her new life as a full-time cruise ship. By the 1980s the ship had settled into a routine of winters in the Caribbean and summers in Alaska, with the occasional (and very popular) world cruise.

Much to the dismay of the ship’s loyal fans, Holland America Line announced that changing safety regulations made it necessary to retire the ship, and a replacement, the sixth Rotterdam, was ordered from Fincantieri shipyards in Italy. A gala finale cruise ended her final season on September 30, 1997.

Sold to Premier Cruises and re-named SS Rembrandt, the ship continued on in cruise service until the sudden financial collapse of the company forced the ship’s layup in Freeport, Bahamas and then Gibraltar. After years of laying idle, a new destination was found for the former SS Rotterdam as a hotel and tourist attraction in her old home port of Rotterdam. She was restored in Poland and Wilhelmshaven, Germany and on August 4, 2008 returned to the city of Rotterdam. She is scheduled to open to the public in December, 2009 as a combination museum/hotel.