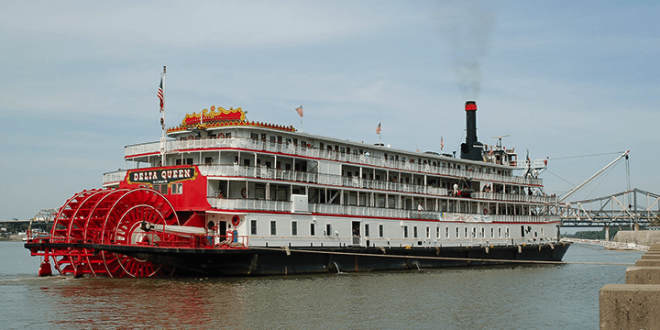 After working his way from deckhand to captain, Gordon Greene purchased his first steamboat with his own savings in 1890. The last years of the 19th century and first years of the 20th were prosperous for steamship lines, and the Greenes purchased several “packet” steamers which carried both passengers and freight.

Their riverboats traveled on the Ohio River from the port at Cincinnati to Charleston, Pittsburgh, and other ports along the way, transporting agricultural products to the west and general goods to the east.

In the 1920’s the railroads came to dominate freight transport, and many packet steamer companies folded. Greene Line Steamers, however, survived by building modern steamships which could carry more freight, by capitalizing on shorter trade routes, as well as by initiating passenger pleasure cruises.

Though the business of pleasure cruising stalled during the Great Depression, the Greene Line’s freight business endured. Greene Line Steamers directed a fleet of 26 steamboats when Captain Tom Greene, son, and successor of Gordon Greene, purchased the Delta Queen in 1946.

Since its inaugural voyage on June 1, 1927, the Delta Queen has become “legendary” as the last original overnight paddlewheel steamboat in full operation. Captain A.E. Anderson, head of the California Transportation Company (CTC), had reportedly defied conventional wisdom when he built the Delta Queen and its twin, the Delta King.

They were the largest, most extravagant sternwheel riverboats of their time, built at a cost of $1 million each. A crystal chandelier, stained-glass windows, and a grand staircase with accents of Honduran mahogany and bronze filigree were just some of the adornments to grace the Delta Queen. Though river transportation was in decline, CTC successfully operated both boats on the Sacramento River, offering “Luxury and Comfort Afloat” on overnight passages between San Francisco and Sacramento.

After some years out of service during the Great Depression, the Delta Queen and Delta King were leased to the U.S. Navy in the late 1930’s for barracks, for naval training and, later, to be used to transport men wounded at Pearl Harbor from oceangoing vessels to military hospitals in San Francisco.

After extensive electrical and mechanical maintenance and a coat of navy gray paint, the steamboats provided general ferry transportation between naval bases in the San Francisco Bay area. When World War II ended, the Delta Queen and Delta King were sent to the mothball fleet. Tom Greene purchased the Delta Queen from the Maritime Commission with a bid of $46,250. (Another company bid higher for the Delta King, which eventually became a floating conference center in Sacramento.)

Tom Greene’s vision to place the Delta Queen into operation on the Mississippi River faced many challenges. To transport the flat-bottomed boat without damage over rough ocean waters–from northern California, along the coast of Mexico, through the Panama Canal to New Orleans–the Delta Queen would have to be towed. Most of the mechanical parts were dismantled and wood planks were mounted on the external framework of the first two decks to protect the ship’s interior.

The Delta Queen arrived safely in New Orleans on May 19, 1947, after a month-long voyage. With the steamboat’s paddlewheel reinstalled and its steam engine realigned, the Delta Queen powered itself to the Dravo Shipyard in Pittsburgh for a complete refurbishment and overhaul. On June 30, 1948, the Delta Queen made its inaugural voyage under the banner of Greene Line Steamers from its port at Cincinnati.

A variety of problems beset Greene Line Steamers in the following years. The company had incurred a large debt from the $750,000 renovation of the Delta Queen, while competition from the trucking industry reduced freight rates, exacerbating the company’s financial difficulties. Frequent engine problems on the Delta Queen were also a hindrance.

The company eventually purchased internal mechanical components from the owner of the Delta King for use as replacement parts, including the paddlewheel shaft which was replaced in 1980.

The premature death of Tom Greene in 1950 placed his wife Letha in charge of the company. To stay in business, Greene Line Steamers eventually sold all of the boats in its fleet except for the Delta Queen, including family namesakes, the Chris Greene, the Tom Greene, and the Gordon C. Greene. In 1958, without funds to market the company for the next steamboating season, Letha Greene decided to fold the company and put the Delta Queen up for auction. The fate of the Delta Queen and Greene Line Steamers changed unexpectedly with the involvement of Richard Simonton. Letha Greene had returned this man’s check for a reservation in early 1958 with a letter explaining that the company was going out of business. Simonton had relished a steamboat trip with his family the previous season and was disappointed to learn of the company’s imminent demise. Simonton rescued the company with a $25,000 loan, a $25,000 stock purchase, and the assumption of $70,000 of the company’s debt. His friend E. Jay Quinby was named the chairman of the board, with the primary responsibility for publicizing the company.

Quinby purchased an antique calliope, a steam-pipe organ, and installed it on the Delta Queen, making it the centerpiece of his efforts to promote steamboating. Quinby played the calliope for passengers as well as to attract the attention of the people in the shore towns who could hear the music as the paddlewheel boat traveled along the Mississippi River. Dressed in vintage clothing, Quinby traveled in advance of the Delta Queen to distribute old-style handbills and to promote the riverboat to the local media. Quinby’s formula successfully increased passenger bookings so that by 1962 the company’s mortgage and other debts were paid in full. However, new legislation in 1966, the Safety of Life at Sea Law (SOLAS), threatened the Delta Queen’s existence as an overnight passenger ship. The law was enacted to prevent the risk of fire danger on overnight vessels carrying 50 or more passengers; the wooden superstructure of the Delta Queen was considered unsafe under the law. Two consecutive two-year exemptions were granted, but the company did not have funds to build an all-steel replacement. Overseas National Airways (ONA) purchased Greene Line Steamers in 1969 with the intention of building a new steamboat. At the same time, company president Bill Muster and publicist Betty Blake continued the fight to maintain the Delta Queen’s presence on the Mississippi River by securing it a place on the Register of Historic Places in 1970. They fought for a permanent exemption from SOLAS based on the Delta Queen’s perfect safety record, its on-board fire safety devices and the fact that it was not on the ocean-going vessel but was always in sight of land. Public officials in support of a permanent exemption from the law included members of Congress, governors and other government officials in the cities and states along the Mississippi River. Public outcry to preserve the Delta Queen and river steamboating heritage included thousands of signatures on petitions to “Save the Queen.” All was to no avail, however, and a final voyage was planned for October 1970. Publicity by Muster and Blake attracted large crowds to watch the Delta Queen’s final passage on the Mississippi River. This public support won the Delta Queen an exemption to 1973 after a rider was placed on unrelated legislation and by-passed the House Merchant Marine and Fisheries Committee. (Exemption status continued to be renewed; in 1998 it was extended to 2008.)

The 1970’s brought many changes to Greene Line Steamers. No longer a family-owned and -operated business, in 1973 the company changed its name to the Delta Queen Steamboat Company (DQSC) in honor of the Delta Queen.