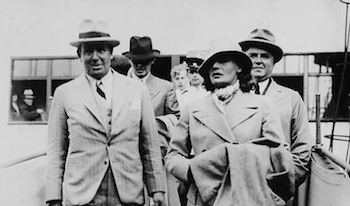 Greta Garbo was a Swedish actress during Hollywood’s silent film period and part of its Golden Age. Regarded as one of the greatest and most inscrutable movie stars ever produced by Metro-Goldwyn-Mayer and the Hollywood studio system. She traveled many times onboard the Swedish America Line from New York to Sweden throughout her career.

Rare newsreel footage of Greta Garbo arriving in Sweden from New York onboard the MS Kungsholm in 1935 . New York: Garbo Sails For Visit To Homeland in 1946. Greta Garbo, Swedish film star, is pictured aboard the liner MS Gripsholm before she left for a visit to her homeland. — Image by © Bettmann/CORBISActress

Actress Greta Garbo had a greater impact on her craft than did any other actress in the 20th century. She introduced what is now called method acting to the screen, and in twenty-eight films, twenty-five of them filmed in the United States, redefined the image of women on the screen. Her stunning beauty and style captured the hearts of millions. Greta Garbo sailed on the Swedish American Line’s M.S. Drottningholm for her first trip from Sweden to America.

In 1923 Garbo left the Academy to star in Mauritz Stiller’s classic Gosta Berling’s Saga, which premiered in 1924. The film was a critical and commercial success. Garbo’s appearance in this film, and in the even more renown Joseph Pabst film Street of Sorrow in 1925, solidified her position as one of the premier actresses in Europe.

Louis B. Mayer, the president of MGM, signed Garbo to a contract after viewing Gosta Berling’s Saga, and she moved to California in late 1925. Her first American film was The Torrent, which premiered in March of 1926. The Torrent, The Temptress and Flesh and the Devil accounted for 13% of the revenue generated by all MGM films produced during the 1925/26 production year. Garbo was now an international star. Greta Garbo & the famous director Maurice Stiller on board the M.S. Drottningholm in 1925 enroute to the United States Greta Garbo becoming very emotional as she sails from Sweden to America in the late 1920s.