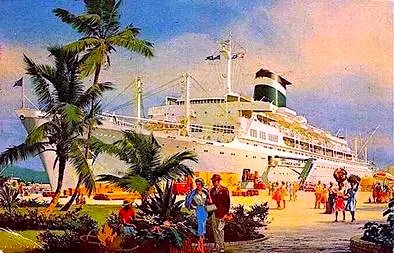 They prospered, especially in the exporting of guano from the Chincha Islands to the United States, where this fertilizer was in considerable demand. Grace’s original British-flag ships had black hulls, white painted masts and booms, and a green stack with a black top.

The early British-flag freighters all had names beginning with C, such as CACIQUE, CAPAC, CHINCHA; Names which were later repeated in ships under the American flag. Later Grace started a service from the Pacific coast of the United States to the west coast of South America, and in 1913 took delivery of the 4,826 gross ton, 400-foot Santa Cruz from William Cramp & Sons of Philadelphia for this run. She was their first American flag ship and was specially designed to carry a large deck-load of lumber, as well as 48 passengers. COLUSA, of 5873 gross tons and 424 feet, was also built in 1913, by Hamilton of Port Glasgow, Scotland, for the same service as the SANTA CRUZ. She was Grace’s last ship for British-flag operations.