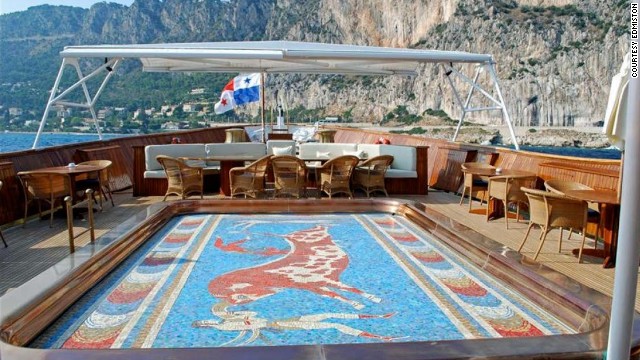 In 2001, the tired-looking vessel was restored to her former glory, and now boasts a mosaic top deck pool which can be converted into a dance floor.

If this yacht could talk, one can only imagine the stories it would tell about one of the most high-profile romances of the 20th century. 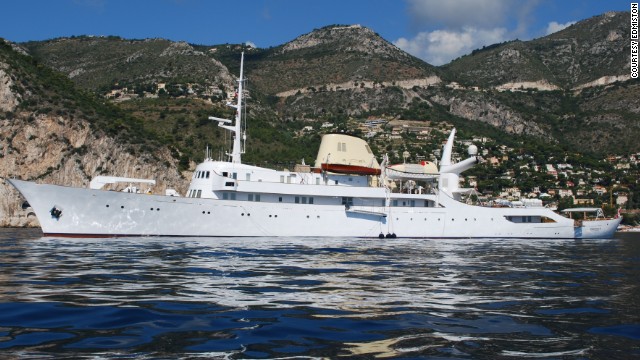 Introducing Christina O, the former yacht of shipping tycoon Aristotle Onassis. But this isn’t just any old luxury yacht — it’s the backdrop to one of the most high-profile romances of the 20th century. 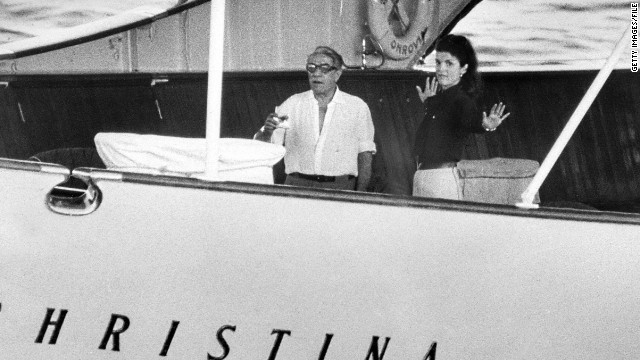 It was on board the 99-meter vessel that Onassis married former U.S. first lady, Jackie Kennedy. Now the elegant boat has been put up for sale for a whopping $32 million.

Known for its lavish parties, the elegant ship may well be called the “Love Boat,” for its notorious on board romances — and even a royal wedding.

In 1956 Prince Rainier of Monaco and U.S. screen star Grace Kelly held their wedding reception on the boat, which accommodates 36 guests in 18 sumptuous staterooms.

Onassis’ own love affair with opera singer Maria Callas also played out on board, as they cruised exotic locations across Europe in the company of Hollywood stars Greta Garbo, and Bette Davis.

However, the affair ended abruptly when the tycoon courted President Kennedy’s widow, Jackie, later marrying on the very same yacht in 1968, near his private island of Scorpios.

“Aristotle Onassis saw Christina O as a powerful symbol of his growing business empire,” said Nicholas Edmiston, chairman of the yacht company Edmiston, which plans to sell the vessel mid-August. “It really was the last word in opulence and many personalities were attracted by its ability to offer them some privacy, not just by its magnificence.”

It’s been quite a journey for the boat which began life in 1943 as a World War II surplus Canadian frigate.

A decade later, Onassis bought the boat for just $34,000, gutting the interior and spending $4 million — the equivalent of $45 million today — converting her into one of the luxurious super-yachts in the world.

In 1975, Onassis died and the yacht was left to his daughter, Christina, in his will. She in turn bequeathed it to the Greek government as a presidential yacht.
More than 20 years later, the tired-looking vessel was restored to its former glory, and now boasts an art deco dining room where Maria Callas and Frank Sinatra used to perform, an atrium with onyx pillars, and a mosaic pool which converts into a dance floor.