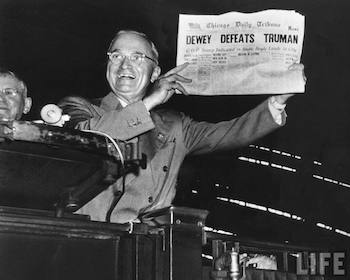 Faced with the likely loss of the 1948 presidential elections, President Harry S. Truman set out from Washington on September 17 on a twelve-day cross-country political barnstorming trip aboard the “Truman Special” from Washington Union Station. 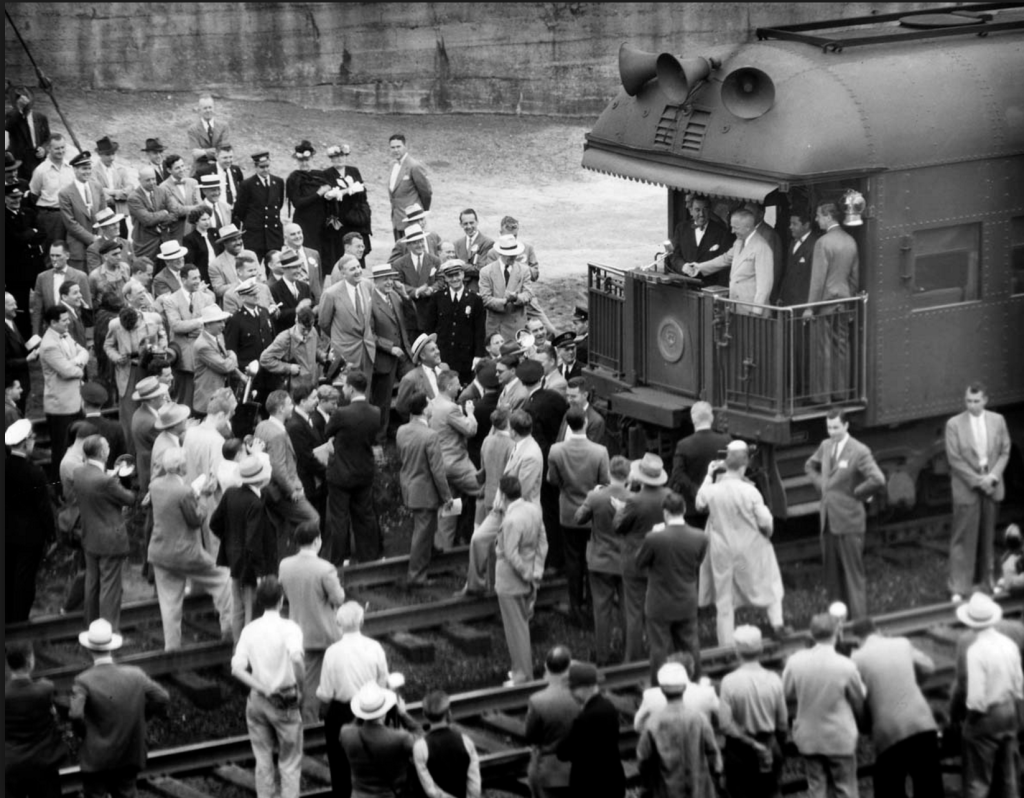 At the last minute, wealthy Democrats had come through with last-minute contributions to make sure the “Truman Special” would complete its 30,000-mile journey. 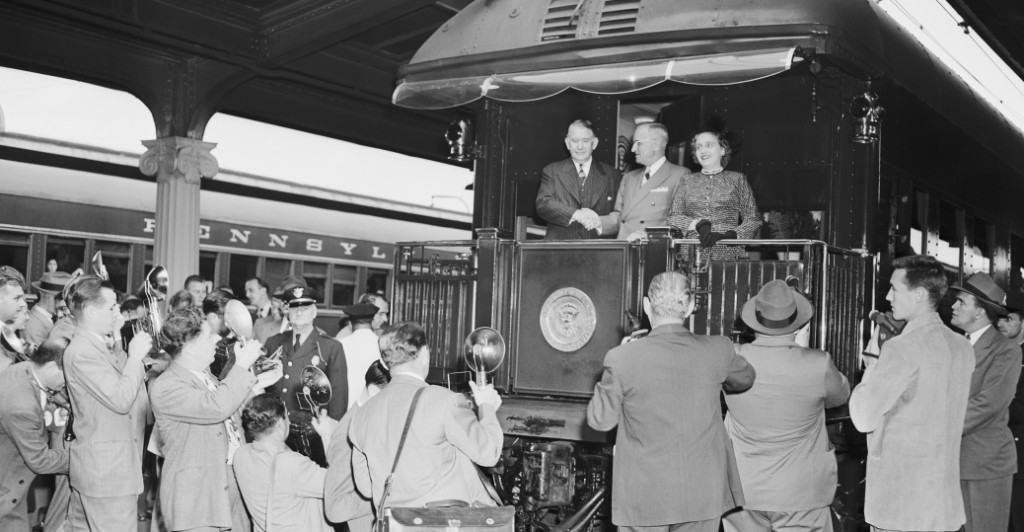 Barkley with Truman and Margeret at Washington Union Station. 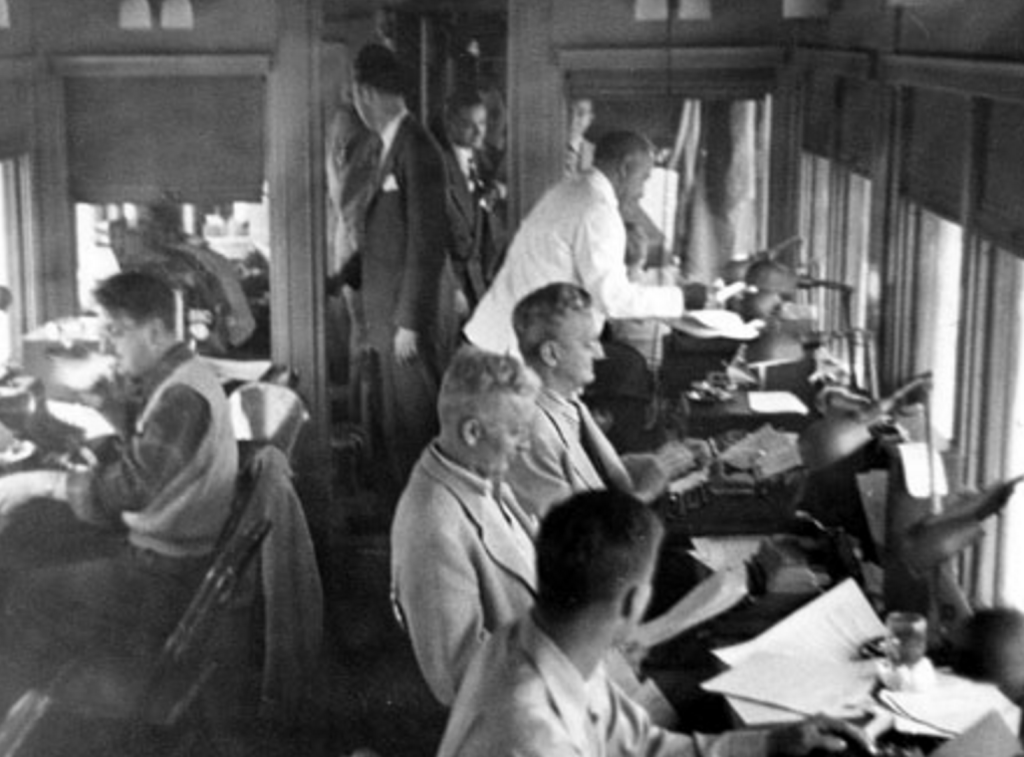 Reporters in the news media car aboard the campaign train.

There were 56 newspaper and magazine reporters, eight radio reporters, five photographers, along with representatives of the Western Union company and Signal Corps personnel with cryptographic equipment and radio on board.

With more than a 100 traveling on the campaign train, there were accommodations in Pullman sleeping cars, with two dining cars serving all meals and three club cars providing bar and lounge cars services. Additional dining cars had been converted into working office space for the White House staff, with another car toward the front of the train provided for the news media. 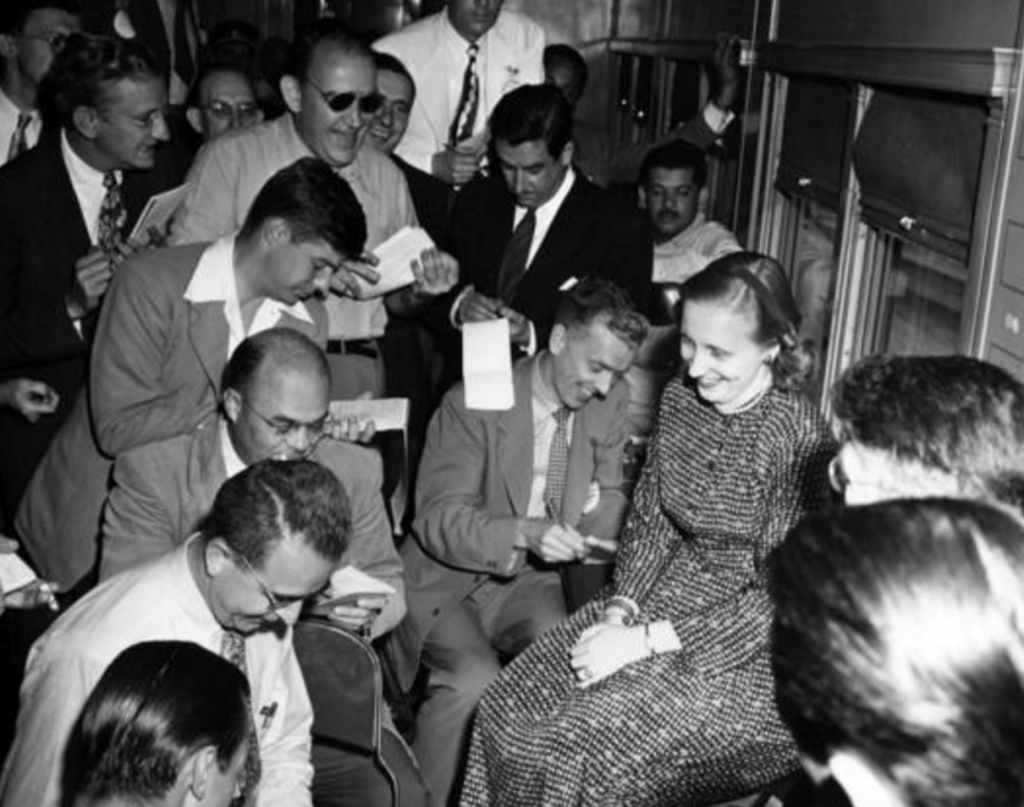 Margaret Truman surrounded by reporters in one of the lounge cars.

The most famous car of the train was the Ferdinand Magellan, the Pullman observation car where President Truman and his family lived during the campaign. 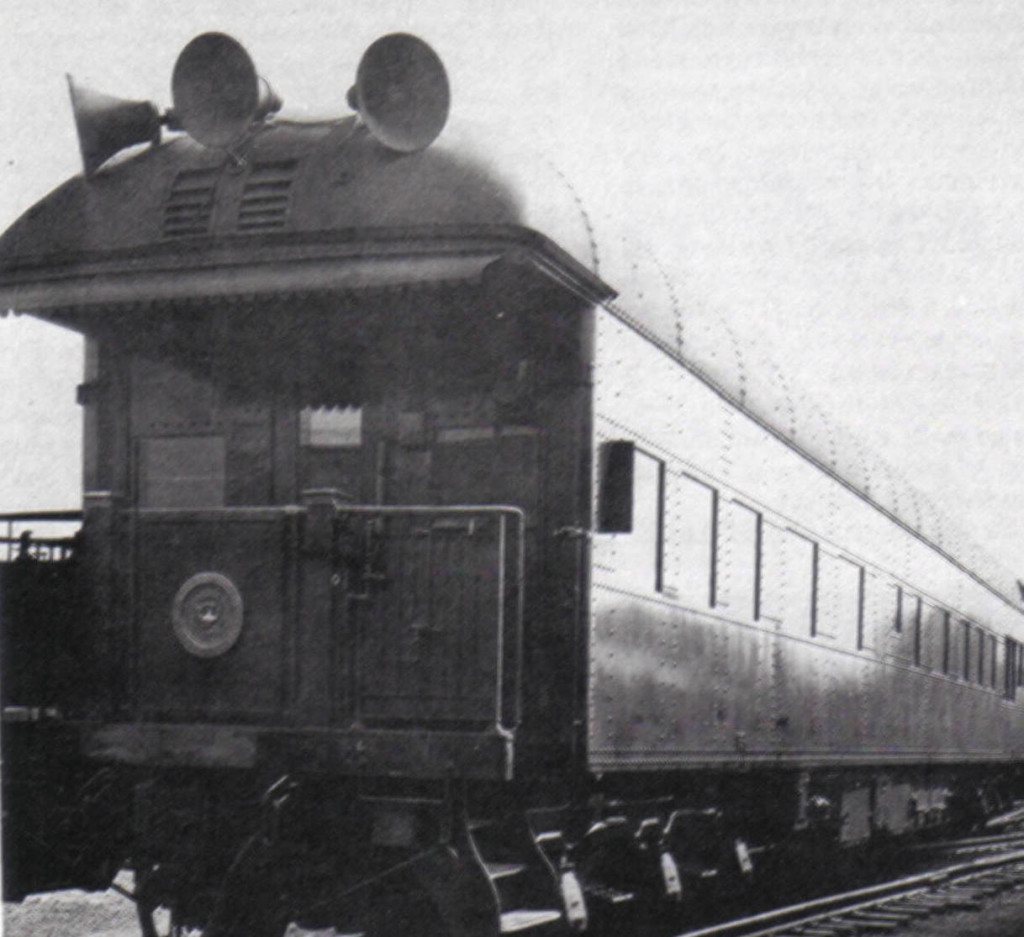 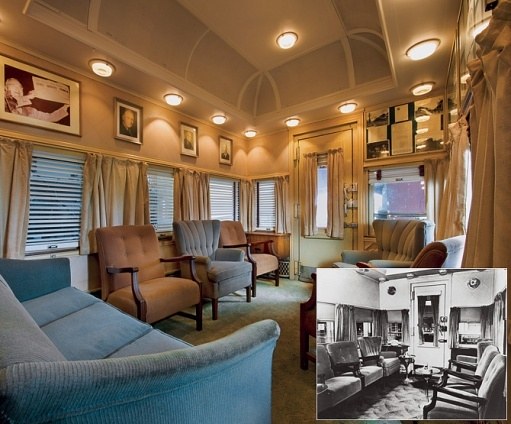 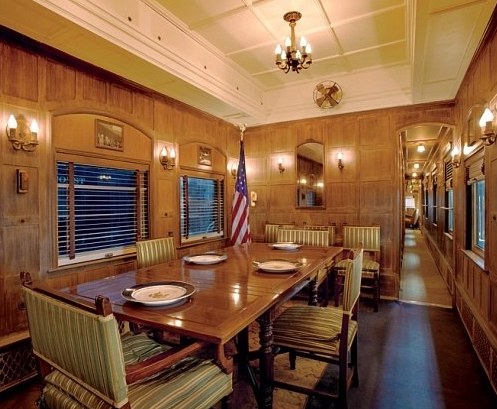 During the twelve-day rail trip, the train would make 231 stops. 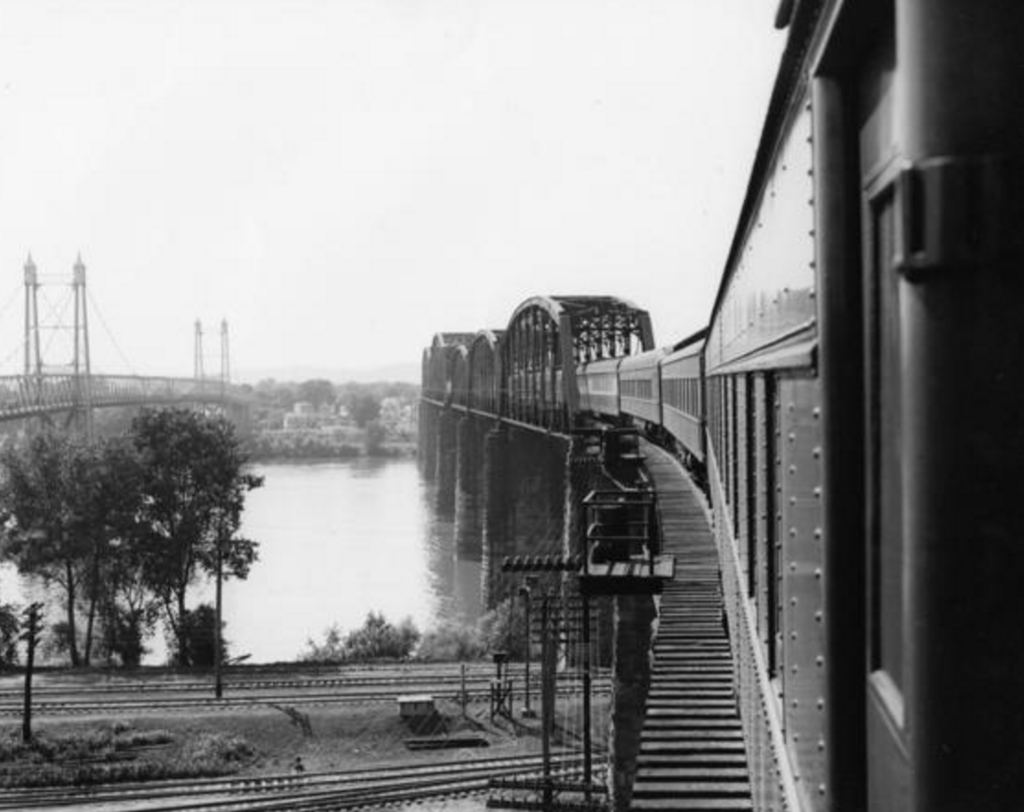 The campaign train is heading West.

They became known as whistle-stops. The train could go slowly and safely through the big crowds that would gather in the small towns and major cities. 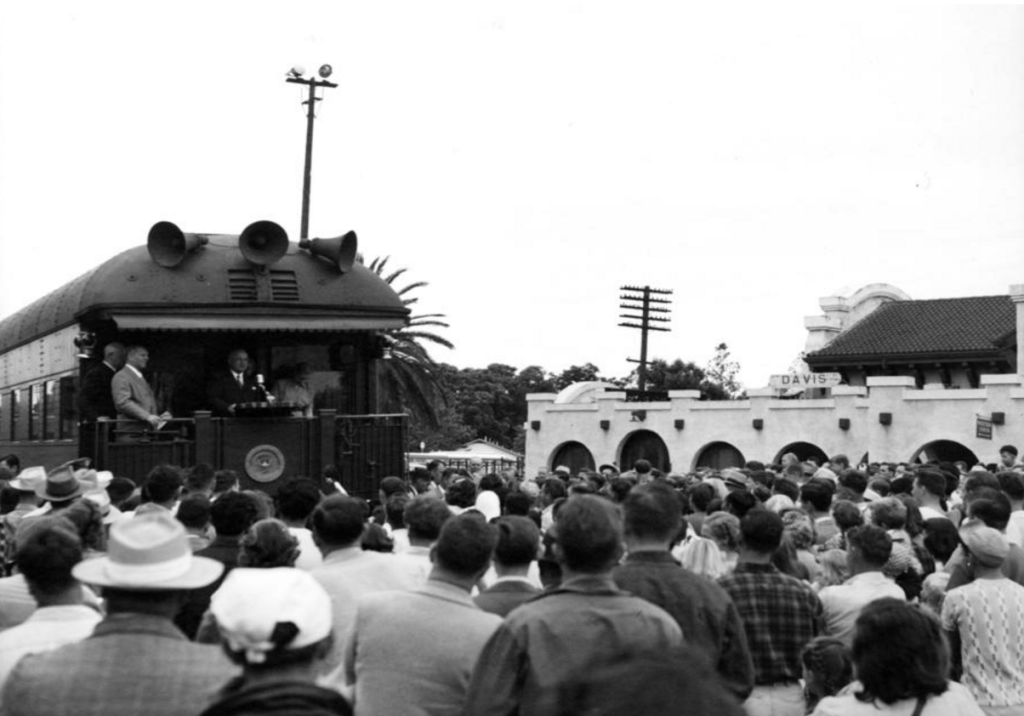 Truman would make a brief public appearance, speaking to crowds from the back of the train on the presidential private car’s rear observation platform. 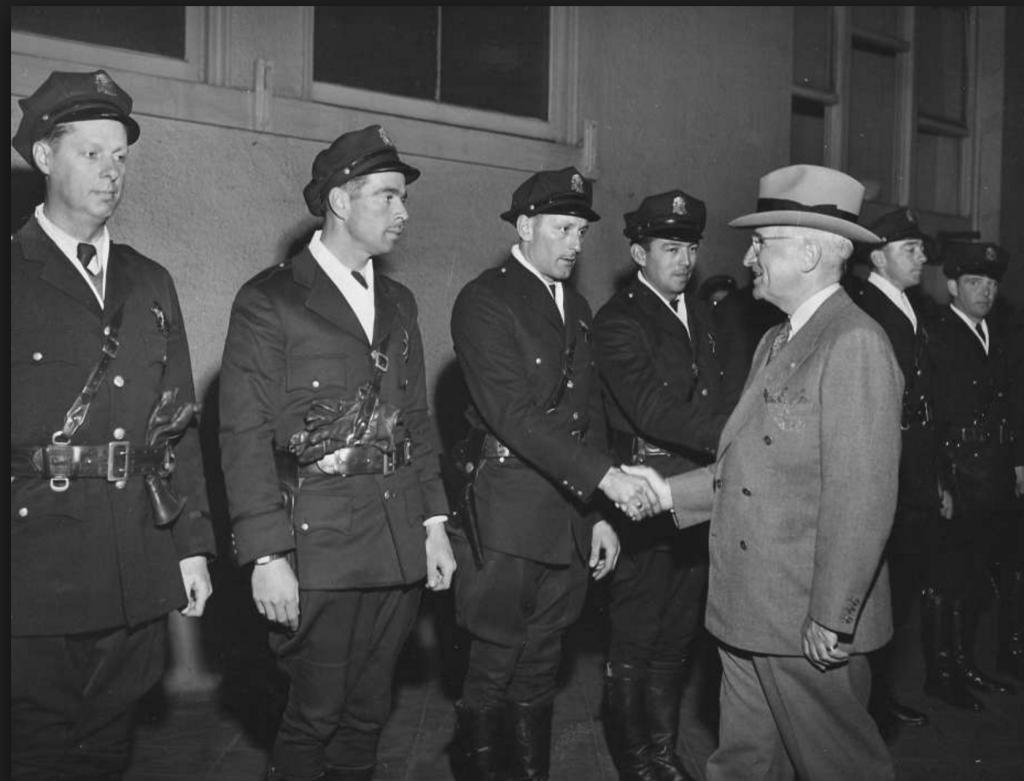 The whistle-stop tour proved an unexpected success and was covered nationwide by the press traveling on the train. Western Union operators at the many “whistle-stop” stations were kept busy coordinating the magazine and wire service reporters on board the train. 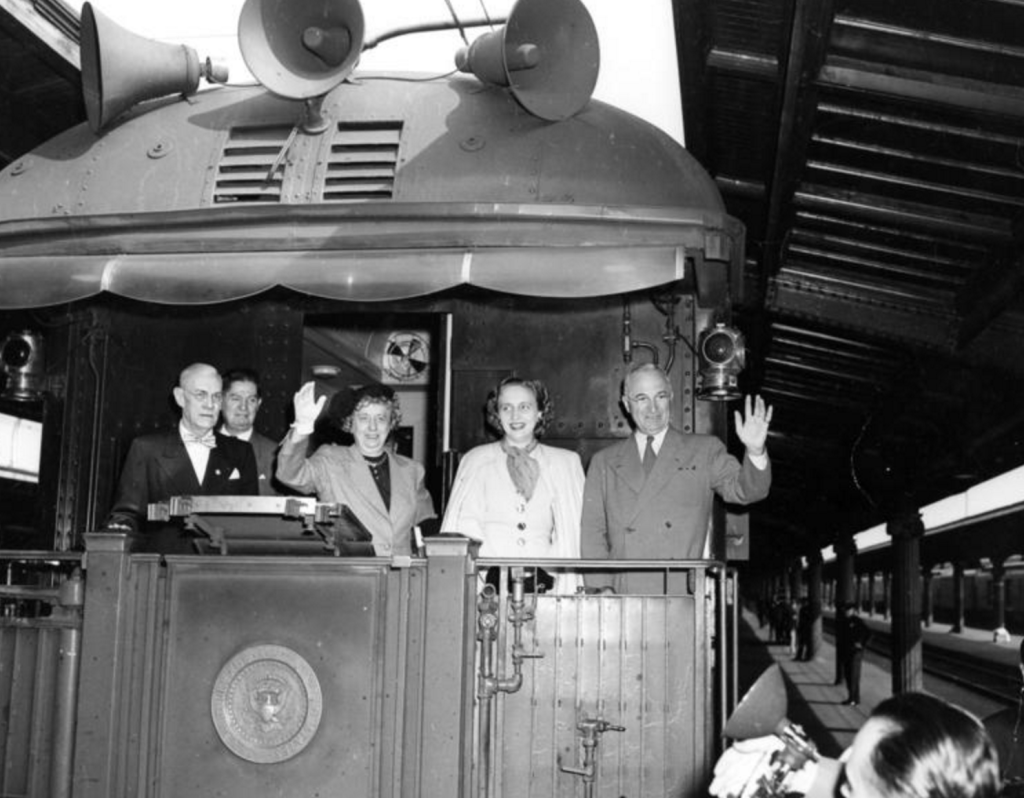 Campaign train with Mrs. Truman, Margaret, and the president on the observation platform.

A “new Truman” emerged as a feisty, engaged speaker, brimming with ideas on policies and programs important to the common citizen as he sped across America. The president smiled and laughed. He introduced his family to audiences, so people got to know him as a family man. 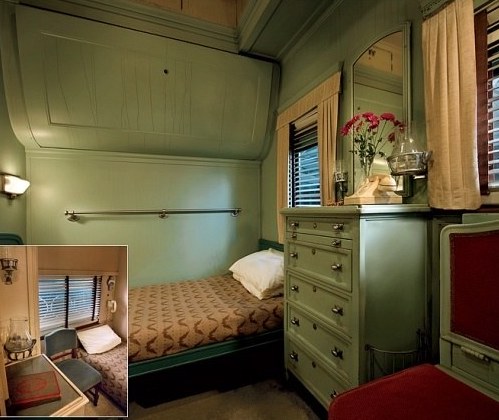 Stateroom accommodations on the president’s car. 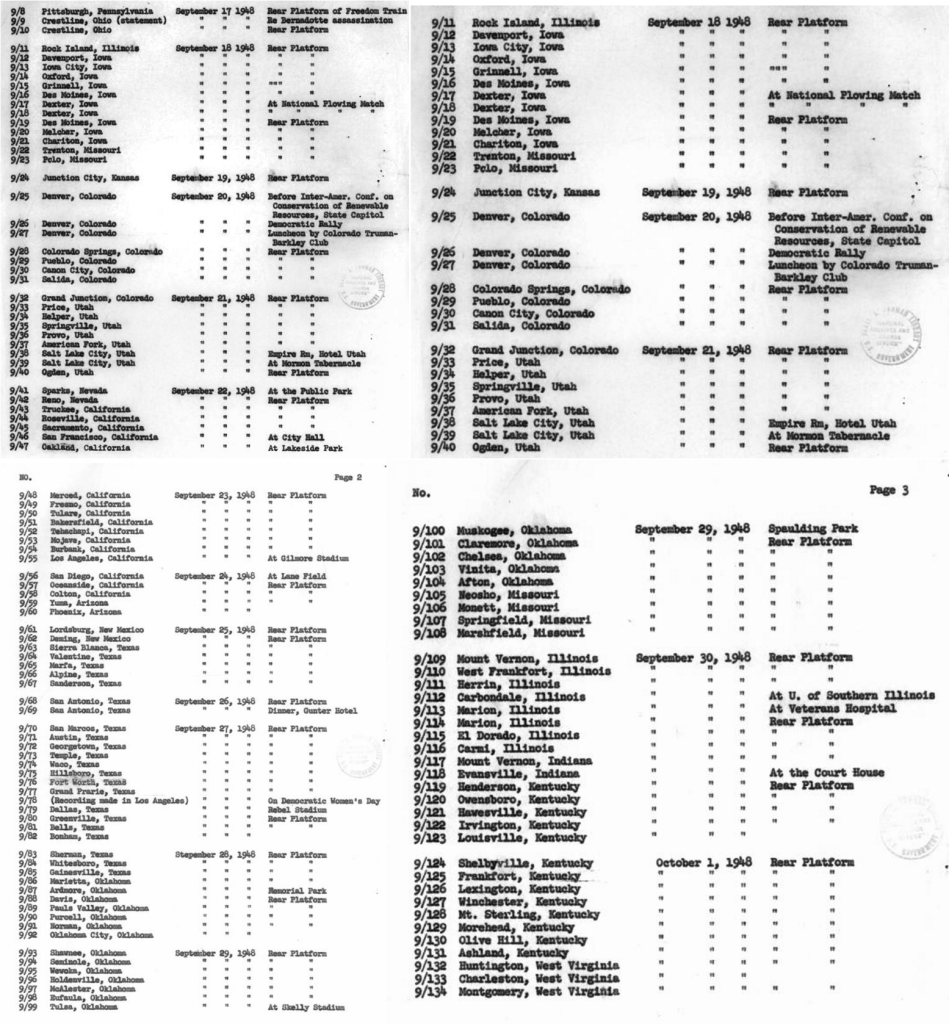 Truman’s schedule of appearances and speeches on the campaign train journey.

Over 75,000 heard him at in Dexter, Iowa with thousands lining the streets of Des Moines. Small town stops in the Western States numbered over a hundred with the train surrounded by citizens.

For example, Glenwood Springs, with a population of 2,253 persons, saw 1,500 gathered around the rear platform of Truman’s train. 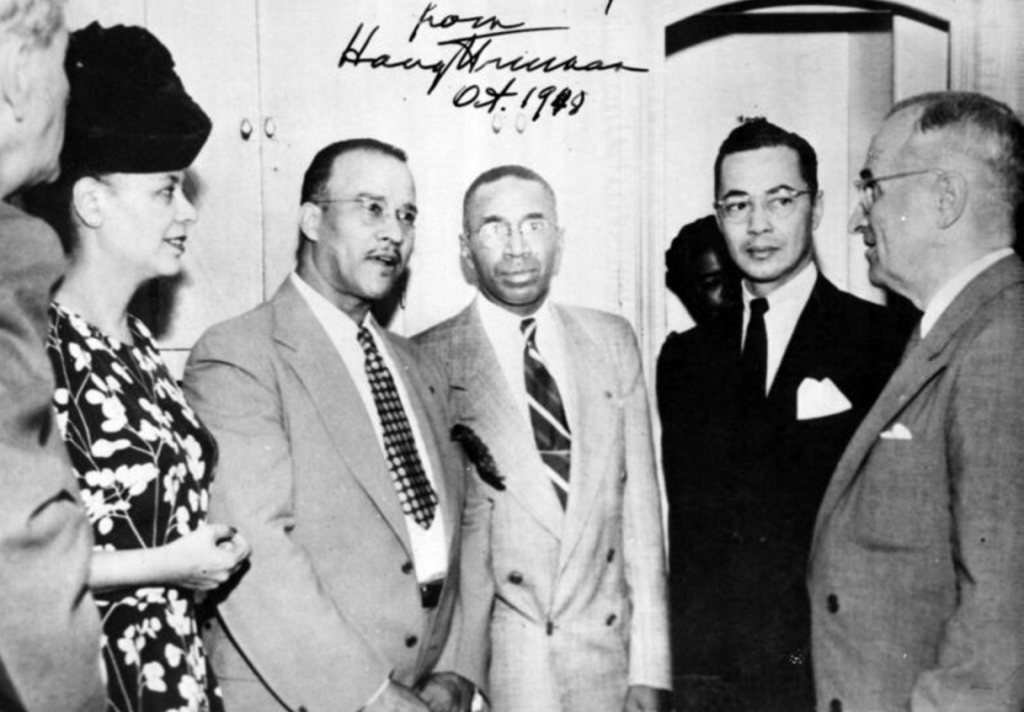 Anna Arnold Hedgeman is pictured here in the dining room of Truman’s private car with prominent community leaders from Des Moines, Iowa. Mrs. Hegeman was director of the National Citizens Committee for the Reelection of President Truman, the first organized effort to have African Americans influence a presidential race. She was instrumental in arranging major black support to re-elect Truman.

People loved the new Truman, yet he returned to Washington weeks later, still an underdog.

On the evening of the election, November 2, Truman stepped out of the spotlight, retiring to a hotel suite in Excelsior Springs, Missouri. He ate dinner, had a drink, and went to bed early.

At midnight, an aide awakened Truman to tell him that he was ahead, but still expected to lose. The president was awakened by his aids again at 4 A.M. This time; he found his lead growing, not shrinking as expected. It seemed that the impossible — a Truman victory — was about to happen.

At just after 10 am, Thomas Dewey conceded defeat. Harry Truman had refused to surrender, and he had engineered the greatest upset in the history of American politics. But for Truman, perhaps the most triumphant moment of 1948 was yet to come. 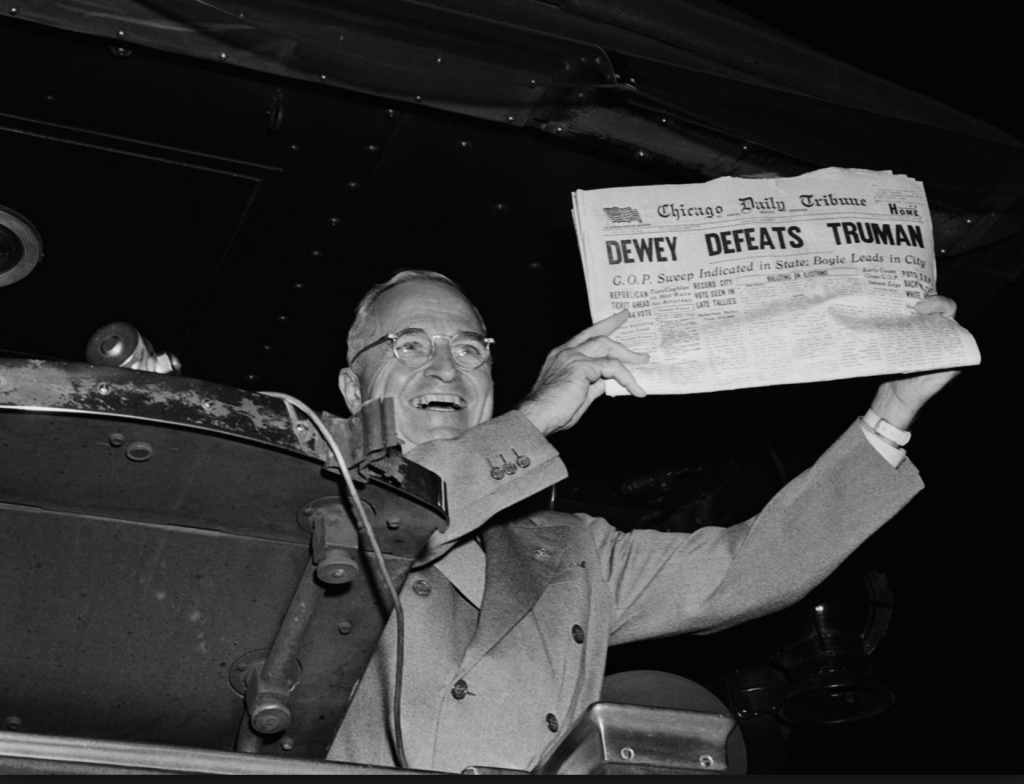 Truman holds up a copy of the Chicago Tribune edition.

On his way back to Washington by train, the Pullman Porter handed Truman a copy of the November 3rd edition of the Chicago Tribune. “Dewey Defeats Truman,” the headline read. 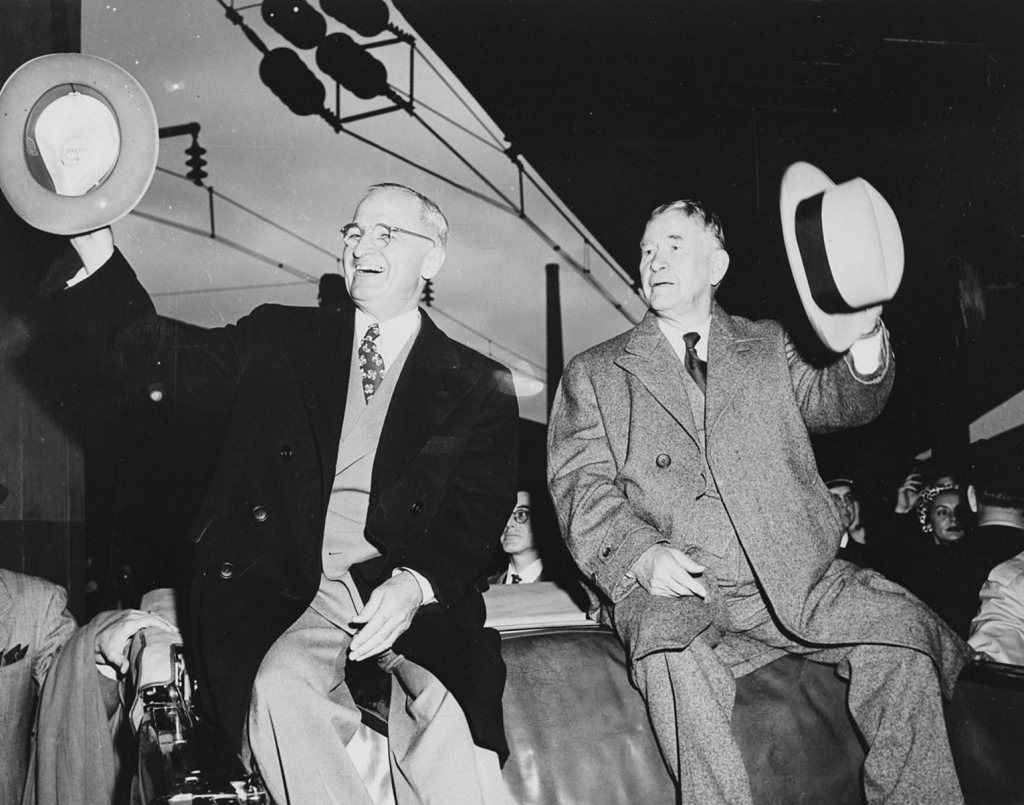 President Truman and Vice President Barkley on the platform after be elected.

As photographer’s flashbulbs exploded, a beaming Truman held the paper aloft. The headline — and the campaign of 1948 — would become political legend.