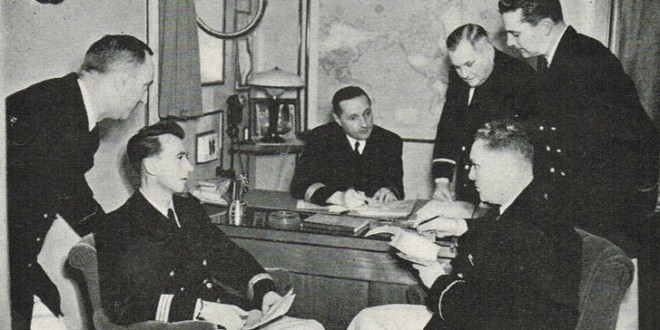 Officers aboard the SS DeGrasse...

Even though France had participated in the victory celebrations, they never laid their hands on large tonnage from the Germans. Instead, the leading French shipping company – the Compagnie Générale Transatlantique (also known as the French Line) – put effort in constructing new vessels to meet the high passenger demands on the North Atlantic. Only two years after the war had ended, the keel of a new CGT-liner was laid down. Rumors said that the new liner would be named Suffren, but no name had been decided upon yet. The French still relied on the British as master shipbuilders, and the new ship was constructed by Cammell, Laid & Company Ltd. in Birkenhead, England.

The pace of the work on the new vessel continued very slowly due to material shortages, work stoppages and other delays so the launch did not occur until February 1924. One year earlier, the French Line had bought a vessel called Leopoldina to fill the gap of the new liner which was still not completed. The Leopoldina was renamed Suffren, so the new liner being built was renamed De Grasse before she was ready for her launch. After the launch had been carried out at the British shipyard, the De Grasse steamed to St. Nazaire, France to undergo her final fitting out. This was due to a strike in England, and the French had no time to wait anymore for their new liner. De Grasse was delivered to CGT on August 4 that year, and she set out on her maiden voyage on August 21. She kept up with French interior standards, and no one was disappointed in what the De Grasse had to offer. There was an indoor pool, a magnificent dining room and a spacious sun deck where the passengers could enjoy the atmosphere and the surrounding sea.

The De Grasse was never intended as a speed champion; she was far from reaching Mauretania’s record over the Atlantic. Her engines pushed her to a service speed of approximately 17 knots. She was teamed with the four-funnel France from 1912 and the Paris. In 1927, the brand new and astonishing Île de France entered the race with Art Deco-interiors that completely stunned the maritime world. She became the fourth vessel in CGT’s extremely distinguished quartet. WithFrance, Paris, De Grasse and Île de France in simultaneous service on the North Atlantic, the French Line had proved to be a very serious threat to long ago established shipping companies such as Cunard and White Star.

In 1932, De Grasse went through a massive refurbishment which made her some 600 tons larger when she returned to service again. Six years later, yet another refit commenced which resulted in improvements of the dining room and the sun deck, plus that an outdoor swimming pool had been added. A year later, in 1939, the De Grasse went out on a nine-day-cruise from New York on April 7. Destinations were Miami, Nassau and Havana. The minimum fare was $100. Later, in the summer she made a cruise out of Le Havre towards Scotland, Iceland, Spetsbergen, the North Cape and the Norwegian fjords. On this twenty-one-day cruise tickets were available from a £2,400-ticket in economy class up to a first class ticket which began at £6,900.

The end of the Twenties and the early Thirties were bad times. The Great Crash at Wall Street, New York brought along poverty and unemployment among the people in both America and Europe. German people searching for a better situation turned towards the relatively new Nazi party who won the elections in the early Thirties, taking control of Germany and making it one of Europe’s strongest nations. The Nazi-leader – Adolf Hitler – turned out to be a dictator of grand scale, but as he managed to get rid of the unemployment, the Germans put good faith in him and his beliefs. The dictator’s aggressiveness was shown time and again, and after acquiring German-speaking parts of other countries politically, Hitler could not restrain himself as he attacked Poland in order to expand his German Reich. This action led to a declaration of war from Great Britain who could not tolerate Hitler’s way of rearranging Europe. World War II was a fact.

The De Grasse’s role in the war was soon to become evident. On October 16th she arrived in New York after an extremely secretive voyage. Her windows and portholes had been painted black, as little light as possible had been used and no radio signals whatsoever had been sent during the whole of the voyage. The liner had been so dark that some of the 281 passengers actually had complained during the voyage that it was too dark to read. De Grasse was moored at pier 88 between Île de France and Normandie. She remained laid up here until May 1940, when she was sent back to Bordeaux, France. For another two months she lay idle, but she could not escape the rage of war when she in July was scuttled in shallow waters by the Germans. They seized the vessel, raised her and took her to Blaye, Gironde as an accommodation ship for troops. In 1941 she was used as a depot ship for Italian U-boats operating in the Atlantic. In June 1942, De Grasse was returned to the Vichy France Government who used her as a seaman’s training ship. By the summer of 1944, De Grasse was in Bordeaux. The war had not been going to well for the Germans, and as they did a rapid retreat after a battle in Bordeaux they deliberately sunk the De Grasse. The vessel remained where she was until the end of the war, when she was raised and towed to St. Nazaire for repairs at the shipyard of Chantiers & Ateliers de Saint-Nazaire. The repairs and refurbishment took close to two years, but when the De Grasse returned to service in the summer of 1947, she was an almost entirely new ship. The most noticeable exterior change was that of her two funnels that had been replaced by a thicker, single one. Returning this early after the war meant that the De Grasse was the first French merchant ship to restore the North Atlantic service. Upon her arrival in New York on July 25, she received a gala welcome by enthusiastic New Yorkers. During this voyage she had not only carried the full load of passengers, but also cargo, among other things containing a large bullet-proof Mercedes that had belonged to Adolf Hitler.

During the first year De Grasse sailed without running mates on the North Atlantic. The Île de France returned in 1949 and the replacement for the lost Normandie came as late as 1950. This was the German former Blue Riband championEuropa, running mate to the Bremen. By the time of her entering service, she had been renamed Liberté. Yet another distinguished French group of ships now adorned the oceans. But in 1952, the De Grasse was considered too old to remain on the North Atlantic, and she was replaced by the brand new Flandre. De Grasse was permanently moved to the Le Havre-West Indies run. Here, she steamed – still sporting her black hull – together with the 1931-built Colombie until 1953 when the new purpose-built cruise ship Antilles replaced her.

As the Venezuela, the former French liner was rebuilt with a raked bow in 1960.
in desperate need of another ship to replace her. As CGT now was willing to sell their aging De Grasse, it was a perfect opportunity for Canadian Pacific who officially took the ship over on March 26 that year. There were speculations of a renaming to Empress of France to honour the former owners, but as no living person with that title existed, the name was changed to Empress of Australia. The coronation cruise was a success, but as the purchase had been for this one occasion, Canadian Pacific had the Empress of Australia laid up at the end of 1955. In February 1956, she was sold to the Italian shipping company Sicula Oceanica who renamed her Venezuela. She was supposed to go on the South American run. On June 11th she made her first voyage in this guise. The sailing started off at Naples, continuing towards Palermo, Malaga, Vigo, La Guaira, Venezuela, Curacao, Kingston, Vera Cruz, Port Everglades and then back home again.

Despite the fact that the Venezuela was an old ship, the Italians thought it worthwhile to make one last exterior improvement in 1960. The former blunt bow was rebuilt into a raked one, increasing the ship’s length with 30 feet. The end came in 1962 when the Venezuela stranded on the rocks near Cannes on March 17. She was declared a total loss and that summer she was towed to La Spezia, Italy to be broken up.