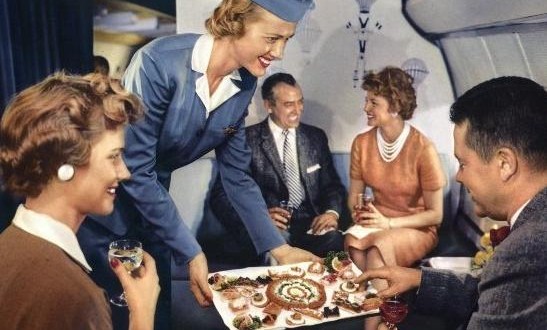 The year was 1956. The setting: a berth on the old Pan Am Clipper, where famous film-star Marlene Dietrich was sound asleep.

Her sometime, and rather unlikely, lover actor Yul Brynner happened to be on the same flight. As the plane glided through the sky from New York to Los Angeles, Brynner slipped across the aisle from his berth to hers, and a night of wild love-making ensued. 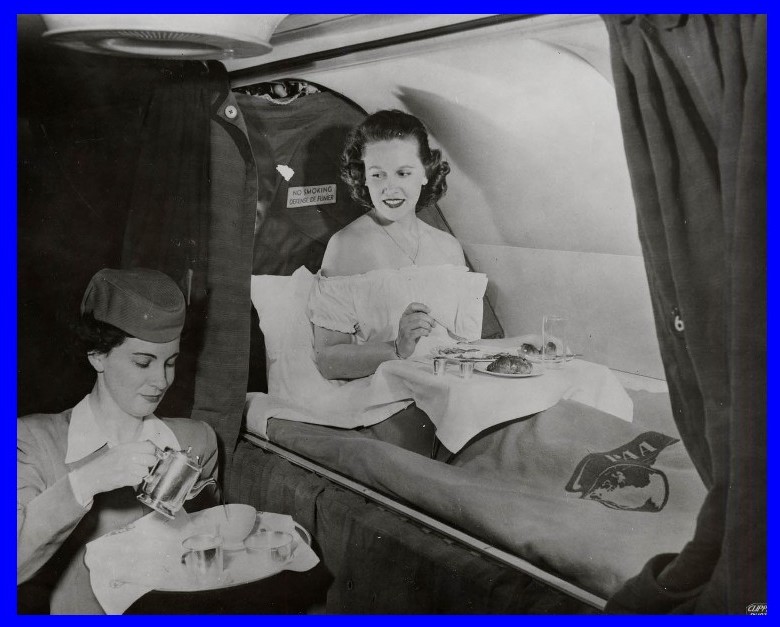 An upper berth on the Pan Am Clipper…

The next morning, as Dietrich described to her dear friend Noel Coward, “I thought I had dreamt this. I looked through my curtains and saw his foot in the shoes I bought [him] from Italy on the floor of the opposite berth.” 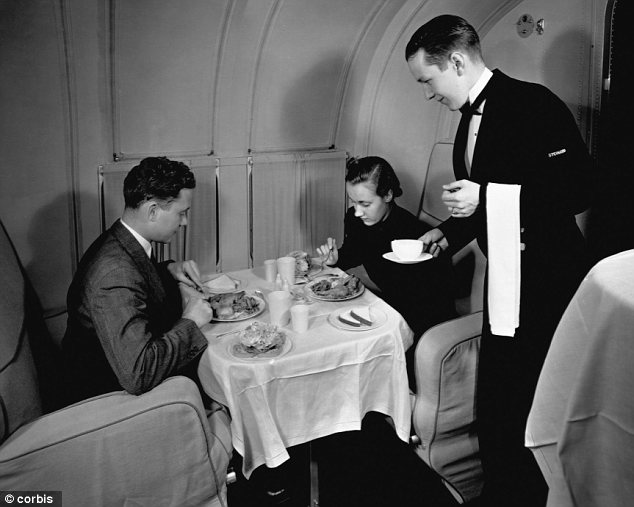 In those days, especially on Pan Am — the only airline to offer berths — flying was far more comfortable, and in some cases obviously far more sexy, than it often is today. 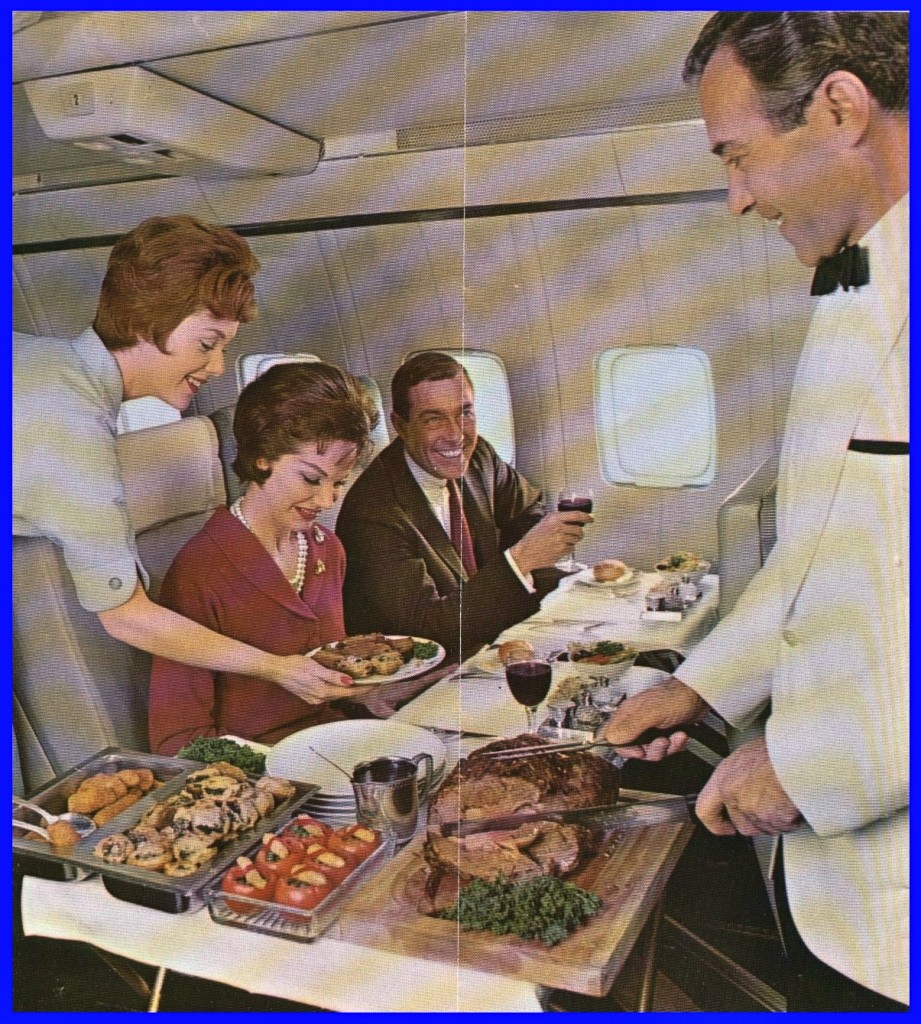 As jets began to enter airline fleets in the late 1950s, officially named First Class service began to appear, with Pan Am again leading the way. Anne Sweeney, who was a Pan Am stewardess from 1964-75, and who now serves as Director of Communications for World Wings International, an association of former Pan Am flight attendants, remembers those days well.

“When I started, the standard of service in First Class was very high. We served a multi-course dinner, ostensibly by Maxim’s of Paris, which meant that they planned the menus,” Sweeney recalls. In those days, the stewardesses actually cooked the food — including roasting beef — creating gourmet fare in a “very small space,” according to Sweeney. The Purser boarded armed with a meat thermometer. The stewardesses used to joke that their hair, post-flight, smelled like Eau de Boeing, an aromatic blend of beef, cigarettes and kerosene. 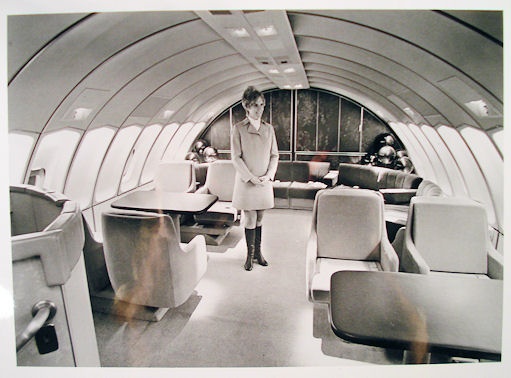 PAN AM First Class lounge on the 747… Passengers met and socialized with one another – no texting.

Pan Am’s First Class also included an upstairs lounge, which could be set up like a dining room. Sweeney recalls trying to create good matches for the table seating there. Once she seated Bill Cosby at a table with a rather uptight British businessman who didn’t know who Cosby was, and who was rather amazed by the steady stream of comedy that accompanied the Iranian caviar, Turkish vodka, and ice cream served in a silver bowl, among other delicacies. 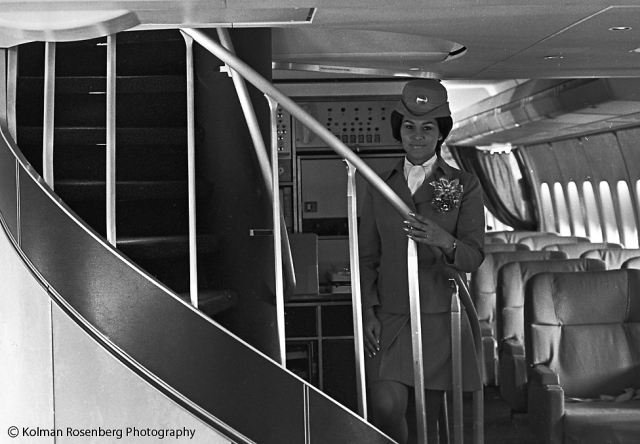 Stairway to First Class lounge on PAN AM…

Later in the flight, some First Class passengers liked to stretch out in quiet of the upstairs lounge. “Senator Daniel Patrick Moynihan was Ambassador to India then. I would bring him a bottle of burgundy and a glass and then tuck him in and go back downstairs. He was always very gentlemanly,” Sweeney says. 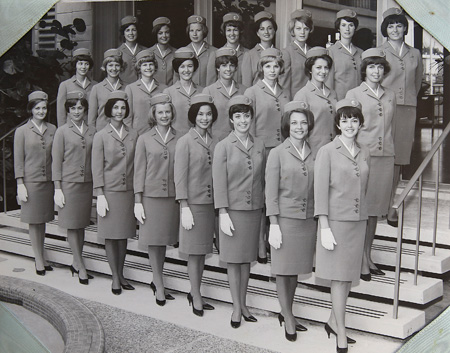 First Class began to experience significant death throes a couple of years ago.  But then airlines turned it around, with much higher fares along with luxurious accommodations.  The sleeper bed but not that private for tryst shared by Dietrich and Brynner. Corporations might be cutting back, and the economy is also causing people to cut back on leisure, luxury travel but there is the 1%, not flying by private jet, that wants the very best.

Is It Really Disappearing?

To many industry insiders, it looks as though First Class is not so much disappearing as it is experiencing a reshuffling and renaming. But airlines might be finding that they just have too many classes. In addition to First Class, many now offer Business Class; Premium Economy, which, he says, is like what First Class was in the old-old days; and Economy.

Business Class has become so comfortable, with lie-flat beds, that it has almost become First Class, and there are currently big bargains in Business Class fares.

The luxury is often still there. It just has a different name. 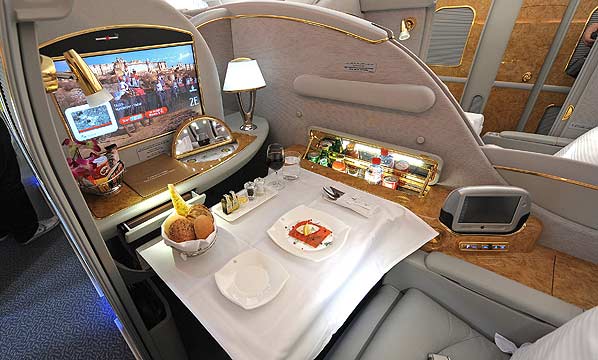 At the same time, reports of the death of First Class would seem to be highly exaggerated. In fact, airlines that have chosen to keep First Class — largely because they have a passenger base that can and is willing to pay for it — continue to up the ante in terms of luxury. The Dubai-based Emirates Airlines, which aspires to make Dubai a central gateway for global travel, has created ultra-luxurious First Class cabins on many of its growing fleet of planes. In fact, it has just dropped a rumored $11.5 billion to acquire 32 more double-decker Airbus A380 super jumbo jets that can easily accommodate top-tier First Class service.

Passengers pay a hefty price, but they enjoy the luxury of a private suite, complete with vanity desk and personal mini bar; a seat that converts into a full-length bed; and a 23-inch, wide-screen LCD screen (offering 600 channels of entertainment). The food and wine, of course, are as over the top as the setting. 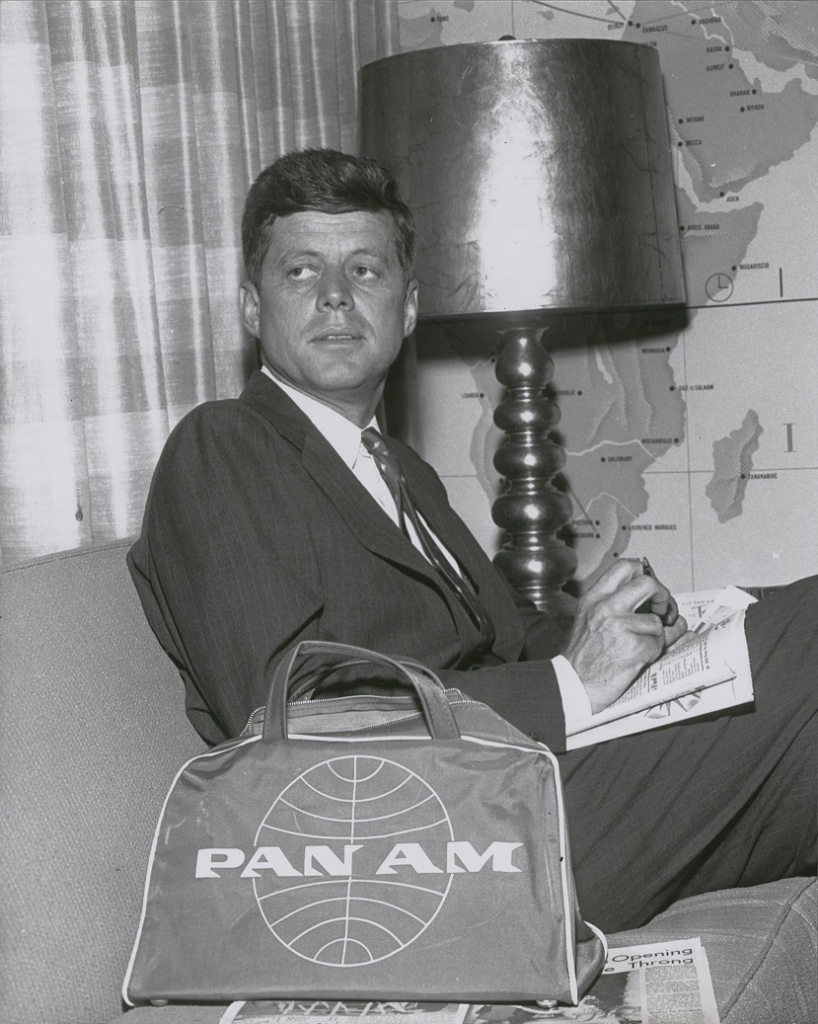 President John F. Kennedy (a U.S. Senator) is seen in Pan Am’s first class lounge waiting for his flight in the 1950s.

The Mumbai, India-based Jet Airways also occupies a place in the fabulous First Class pantheon. Its First Class cabin includes eight private suites featuring nearly seven-foot-long beds, compete with eight-point massage system. Other details: A 23-inch flat-screen monitor, storage closets and a full-length hanging wardrobe, and a work table that can be transformed into a dining table for two. Menu choices include gourmet Indian fare and Western choices created by Michelin two-star chef Yves Mattagne. The wines are fine, and the champagne is either Dom Pérignon or Krug.

First Class now, it would seem, is every bit as luxurious as First Class then . . . even if you won’t find Marlene Dietrich and Yul Brynner canoodling in one of the cabins.

From China to the USA is the biggest and most profitable airline and first class market.

The skies above the Pacific seem to be getting busier all the time, as airlines based on both sides of the ocean are putting more planes in the air – and connecting more cities – to carry rising numbers of business and holiday travelers.

This month, four major Chinese and US carriers are launching new trans-Pacific routes. And airlines that connect the two economic giants are investing in more aircraft and services.

Hainan Airlines will offer Boston as its third US destination starting on June 20, and by the end of this summer, China Southern Airlines Co Ltd will launch Guangzhou-New York services.

The expansion of services will mean stiffer competition, but airlines are still confident in the capacity of the market to fill those seats.

“The competition is definitely fiercer, but the market is large enough for all of us,” said Chen Gang, deputy general manager of China Southern Airlines.

High profits on China-US flights are prompting airlines to invest in the market, experts said.

“The China-US route is the most profitable route in the world,” said Li Xiaojin, a professor at the China Aviation University in Tianjin. The profit of one trans-Pacific route is almost equal to three domestic routes, he said.

US-based airlines have about 35 percent of the market, and Chinese airlines have 25 percent, Li said. The remainder is held by carriers from other countries, such as Japan and South Korea.

But the market structure may be changing, since most major Chinese airlines are putting more resources into the US market.

For example, Air China is adding Beijing-Washington service. It already runs flights between China and New York, Los Angeles, San Francisco and Houston. The carrier is also increasing capacity on its routes, using a fleet of new Boeing 777-300ER aircraft.

China Southern Airlines has put its flagship Airbus A380 on the Guangzhou-Los Angeles route and its Guangzhou-New York route will use Boeing 777-300ER aircraft that the carrier took delivery of this year.

Hainan Airlines also put its entire fleet of B787 planes – the world’s newest passenger aircraft – into service in the North American market.\\”After taking delivery of the B787 planes, Hainan Airlines has more competitive power to develop in the US market,” said Liu Jichun, the director of the carrier’s international business development department.

In the US, cooperation with local airlines, mostly through alliances that include many carriers, is the main way that Chinese airlines compensate for the lack of local networks. Through these alliances, Air China has code-sharing arrangements with United Airlines, while China Southern Airlines works with Delta Air Lines Inc. Hainan Airlines isn’t part of any alliance yet, but it has partnerships with Alaska Airlines Inc, JetBlue Airways Corp and American Airlines.

US-based airlines are acting to enlarge their networks in China, as well.

“China is one of the most important and fastest-growing international markets for United, so we will continue looking for opportunities to add capacity to this promising market,” said Walter Dias, United Airlines’ managing director for greater China and South Korea.

“The recent steady growth of the economy in China is creating a large middle-class segment of people who are willing to spend their disposable income for overseas travel,” said Dias. “So we are very optimistic about business opportunities in China.”

American Airlines, the world’s largest carrier but a latecomer in the China-US market, also plans to expand its presence in China and obtain revenue growth of 67 percent in the market this year.

The airlines, which has only had a small share in the market thus far, is adding services that it hopes will propel revenue growth, said President Scott Kirby. It’s aiming for double-digit revenue gains in China, in line with China’s air travel market growth in recent years.

The China market generates about 25 percent of the total income of All Nippon Airways Co Ltd, with 10 direct routes from China, said Abe Shinichi, ANA’s chief representative in China. Chinese passengers transferring in Japan to the US are an important source of business for the Japanese carrier, and ANA also plans to explore more Chinese second-tier cities.

Airlines based in Japan and South Korea have obvious advantages in terms of price, because revenue from local passengers already covers their costs, and transfer passengers mean extra profit, some business insiders said.

“The airlines from Japan and South Korea are very competitive in the market,” said an official of Hainan Airlines.