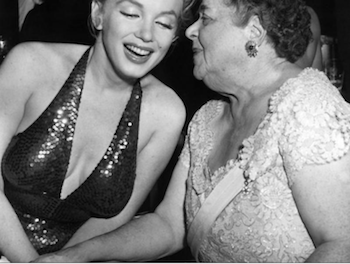 Pianist, gossip columnist, TV star, and above all a giver of great parties, Elsa Maxwell was famous for being herself. 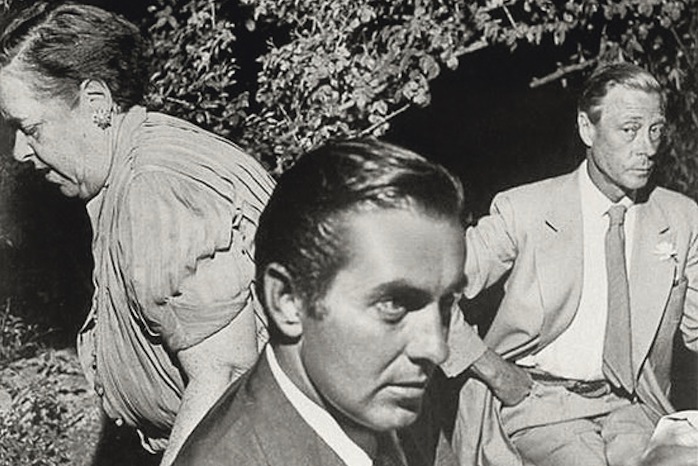 Elsa Maxwell, Tyrone Power and the Duke of Windsor.

Elsa Maxwell, Tyrone Power and the Duke of Windsor at a 1948 party at Maxwell’s house on the French Riviera. 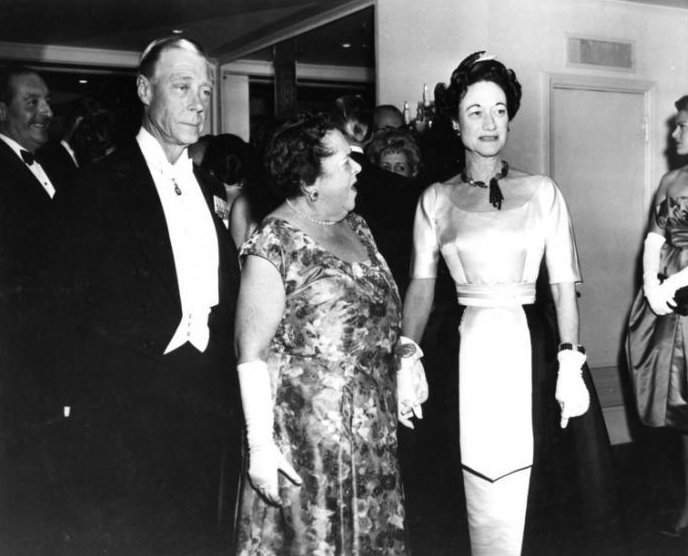 Elsa with the Duke and Duchess of Windsor.

The fame-maker who introduced Rita Hayworth to Ali Khan and Maria Callas to Aristotle Onassis had managed to become famous herself and remained known as the ‘Hostess with the mostest’. 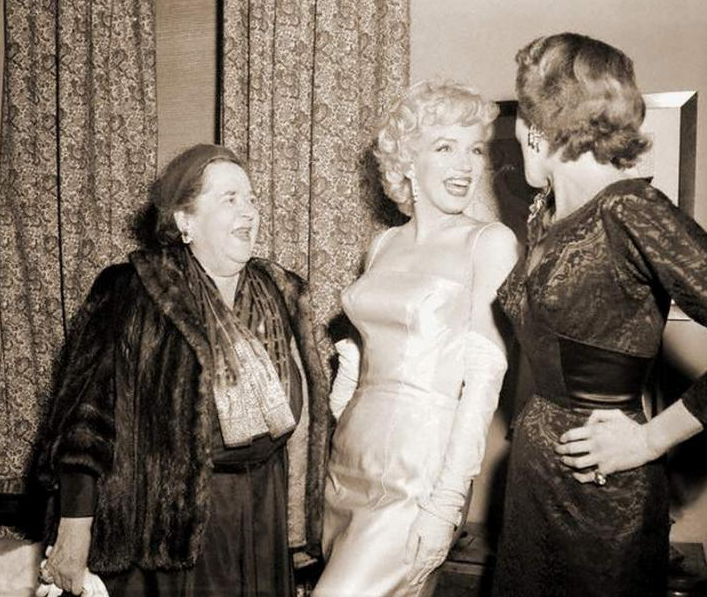 And she did everything: She played the piano, published (“Elsa Maxwell’s Etiquette Book”), took on public relations assignments, ran a gossip column for the Hearst press, appeared in films, introduced wealthy unknowns to society, served as a television talk-show guest and was Seen in the right Places.

Elsa Maxwell (May 24, 1883 – November 1, 1963) was an American gossip columnist and author, songwriter, and professional hostess renowned for her parties for royalty and high society figures of her day. 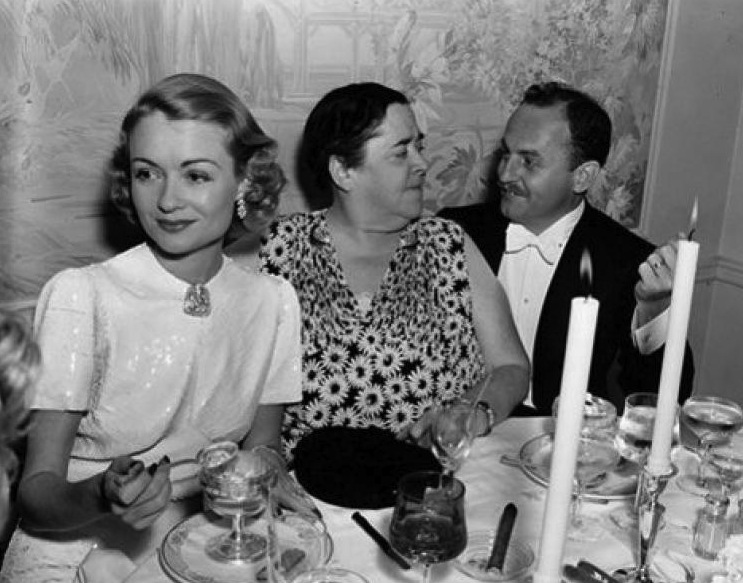 Maxwell is credited with the introduction of the scavenger hunt and treasure hunt for use as party games in the modern era. Her radio program, Elsa Maxwell’s Party Line, began in 1942; she also wrote a syndicated gossip column. She appeared as herself in the films Stage Door Canteen (1943) and Rhapsody in Blue (1945), as well as co-starring in the film Hotel for Women (1939), for which she wrote the screenplay and a song.

Elsa Maxwell and a line of chorus girls…

She developed a gift for staging games and diversions at parties for the rich, and began making a living devising treasure-hunt parties, come-as-your-opposite parties and other sorts, including a scavenger hunt in Paris in 1927 that inadvertently created disturbances all over the city. 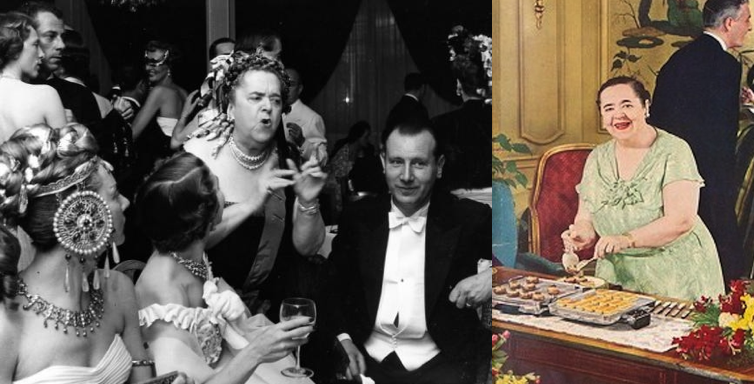 Elsa hosting and on TV show…

Returning to the US, Maxwell worked on movie shorts during the Depression, unsuccessfully. “Her imprimatur of social acceptability carried so much weight that the Waldorf Astoria gave her a suite rent-free when it opened in New York in 1931 at the height of the depression, hoping to attract rich clients because of her.”

Maxwell took credit for introducing Rita Hayworth to Prince Aly Khan in the summer of 1948. In 1953, Maxwell published a single issue of her magazine, Elsa Maxwell’s Café Society, which had a portrait of Zsa Zsa Gabor on the cover. Anne Edwards’ biography of Maria Callas (Callas, 2001) and Peter Evans biography of Aristotle Onassis both claim that Maxwell introduced Callas to Onassis.

Above all, she threw parties: come-as-you-are parties, come-as-your-opposite parties (Fanny Brice showed up as Tosca), gambling parties, cooking parties, scavenger-hunt parties. For the last 30 years of her life, Elsa was one of the best known women in the world, yet, among the millions who recognized her name, very few could have told you what it was that she did. She wasn’t famous for being famous, however. She was famous for being Elsa Maxwell.

In Sam Staggs’s lively biography, Elsa emerges as someone who rose above dreary beginnings with a vague determination to . . . well, rise above dreary beginnings. Born in Iowa to a middle-class family and originally named Elsie, she was raised in San Francisco. She moved to New York in 1907, but in truth she never really “moved,” because for most of her life she scarcely put down roots. Her life was like an old adventure play, the kind Broadway produced before movies came along, with a pile of episodes incoherently bonded.

Lifestyles like Elsa’s, so mated in public perception with leisure-class frivolity and so dependent on the indulgence of bigwigs, often run out of welcome after a few years. But as Mr. Staggs says, it was a very long second act. In the 1950s, Elsa was living as ever, only now she was in love—with Maria Callas. As Mr. Staggs recounts it, Elsa gave Callas bad notices in her column till the scandal-prone Greek diva initiated a friendship—”scripted,” he writes, “like the plot of a verismo opera.” Elsa already had a life partner, Dorothy “Dickie” Fellowes-Gordon, a Scots heiress of impressive family. But Callas became Elsa’s obsession. She not only supported Callas with her writing but followed her all over the map as if moonstruck, “dazzled,” says Mr. Staggs, “by the beautiful calamity always on the verge of happening.” 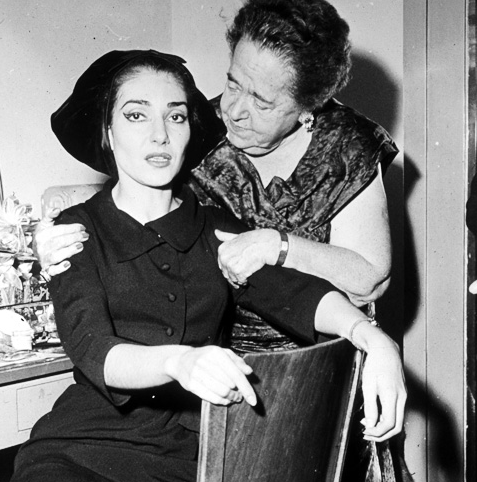 By the time Elsa first appeared on Jack Paar’s “Tonight” show, in 1957, she had reached that age at which one’s native tact is spent and one’s tongue wags recklessly. In her 70s, Elsa finally became one of the few things she hadn’t been already: a television star, playing the guest who could be counted on to say shocking things about famous people, including herself. Mr. Staggs quotes Paar: “She was so brazen and outspoken that ‘our act’ became the talk of television.” Now the author invents another montage, of Paar’s introductions of Elsa: “And here she is, the little Orphan Annie of the Waldorf” or “The winner of the Nobel Prize for Catering.” If Elsa invented herself, she had plenty of assistants.

Mr. Staggs writes in a bright, conversational style exactly suited to the worldly affairs he tells of. With so many has-beens to discuss, he includes side boxes as sotto voce explanations, for instance, of Maxine Elliott, once arguably the most beautiful actress on Broadway; John Barrymore’s sometime wife, the aptly named Michael Strange; Elsa’s rival partygiver Perle Mesta; even Greta Garbo, who Elsa thought cut so dismal a figure in retirement that she sent her a batch of Helena Rubinstein cosmetics. Mr. Staggs has done his research, too, running down a host of the famed and unknown who knew his subject; they speak, and she is among us once more. “It was always exciting to be with her,” says Mary Carter, who met Elsa at the time of l’affaire Callas. “And she enjoyed every second she was alive.”

She died of heart failure in a Manhattan hospital.