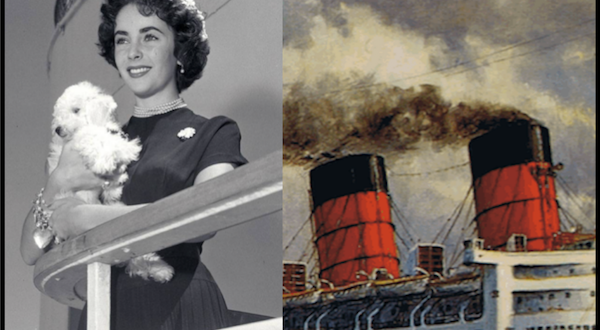 Besides “crossing the Pond” on Cunard, Elizabeth Taylor sailed to Europe on the French Line’s SS Liberte, cruised to the Mediterranean aboard Cunard’s RMS Caronia and Mauritania. Liz sailed to the Caribbean and South America on the Grace Line’s SS Santa Rosa. She loved ships and the sea. Elizabeth Taylor with her mother and on sailings during the 1940s.

Taylor had sailed a number of times on the RMS Queen Mary with her mother, before her famous Honeymoon crossing in 1950. Honeymoon onboard the RMS Queen Mary. The Duke and Duchess of Windsor were aboard. But Liz was the bigger star!

Taylor and hotel heir Conrad “Nick” Hilton Jr. set a course for romance when the RMS Queen Mary set sail from New York on May 24, 1950, 18 days after the couple said “I do” at the Church of The Good Shepherd in Beverly Hills. Liz and Nicky Hilton onboard the RMS Queen Mary.

Her 5-carat diamond engagement ring and platinum-and-diamond wedding band sparkling in the light as she waved good-bye, the honeymooners headed out on a 14-week excursion which would take them to Monte Carlo, Cannes and Cap d’Antibes While the newly dubbed Mrs. Hilton may have felt, like so many other just-married lovebirds, as though she and her husband were the only two on board, the luxury liner’s passenger list also contained the names of another twosome whose wedding caused a media frenzy in 1937– the Duke and Duchess of Windsor. Elizabeth made her film debut in 1942’s There’s One Born Every Minute; however, it wasn’t until 1944’s National Velvet that the young starlet’s qualities were finally recognized. 1960’s Butterfield 8, in which she played ‘The Most Desirable Woman In Town’ brought her first Academy Award. More voyages for Liz on Cunard. She’s seen with husbands Richard Burton, Mike Todd and her two sons from her marriage to Michael Wilding.

Another followed for in 1967 for ‘Who’s Afraid of Virginia Woolf?’ where she portrays, quite eerily, one half of a fracturing marriage. Now a household name, her dramatic private life, and penchant for life’s finer things kept the world fascinated. After the death of a close friend from AIDS, she tackled the epidemic head-on, starting two foundations and working tirelessly to raise awareness of the disease. When she died in 2011, it felt as though era ended with her; Taylor was widely recognized as one of the final vanguards of “Classic Hollywood.”

And like many great stars, she made many crossings on the Cunard Line, with husbands Conrad Hilton Jr., Michael Wilding, Mike Todd and Richard Burton and her three children.

With eight marriages (twice to one man), two Academy Awards and two Oscars behind her, Liz’s jet-set, wild ride, motion-picture life was nothing short of monumental.

She won’t be forgotten.

Enjoy today’s cruising luxury of “Crossing the Pond” onboard the QUEEN MARY 2 from New York to England, check out CUNARD LINE today.