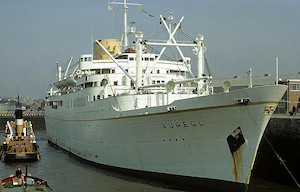 Elder Dempster Lines was one of the UK’s largest shipping companies, and during its 150-year history, it operated more than 500 ships. Based in the historic port of Liverpool it was the major shipping line to serve West Africa. As well as its cargo ships, the Elder Dempster Lines operated three ocean liners on a scheduled service to Ghana and Nigeria. It employed many people, from its seagoing staff to that personnel in its UK offices and Elder Dempster Agency branches in West Africa. The company had its own Cadet Department to train the deck, engineer, purser, and catering officers of the future. There was a cadet training ship, and Elder Dempster Lines was the first British shipping company to open a purpose-built cadet school. On 16th March 1972, the AUREOL made the last West African passenger sailing out of Liverpool. Her departure was held up by thick fog which prevented the liner leaving her berth in Brocklebank Dock for the landing stage. The chief barkeeper on the AUREOL, Malcolm Hanlon, summed up the feelings of regret when he said: “Liverpool is such a great port. To see a ship like this leaving for the last time does hurt.”

The AUREOL returned to Southampton at the end of this voyage as the Mersey Docks & Harbour Company had closed the passenger facilities at Princes Landing Stage. Southampton remained the U.K. terminal for the next two and a half years until 21st October 1974 when the ship was laid up in the southern port after completing 203 round voyages in the West African passenger trade. Mr. G.J. Ellerton, the chairman of Elder Dempster Lines, said that the withdrawal of the AUREOL was a matter of deep regret. It would mean the end of a service begun in the 1860s, and for that reason, they had hoped it would be possible to find a replacement ship which would enable a viable passenger service to be maintained.