LATEST
Home > ALL POSTS > Duke Kahanamoku… King of the Surfboard… 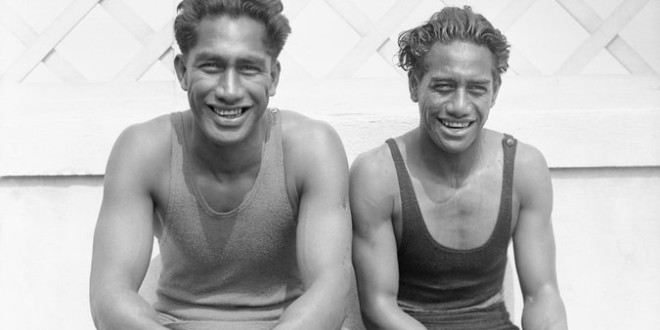 The Duke and swimmer.

Duke Kahanamoku… King of the Surfboard… Reflecting the condescension with which Americans of the period viewed Hawaiian culture, Wolfe wrote that Duke had started his career as “one of the brown naked kids” of Honolulu who “swim through the shark infested waters of the harbor in search of silver coins thrown from the docks of the incoming steamer.”
Moving to Southern California, Kahanamoku leveraged his fame to play in more than two dozen Hollywood films, as a pirate, bodyguard, soldier, Sioux Indian, Turk, Hindu, Persian, South Sea Islander and other minor characters. (His final on-screen performance was as a native chief in “Mr. Roberts” (1955), starring Henry Fonda and Jack Lemmon.)

The Duke, as sportswriters called him, was widely lauded for heroism in 1925, when a 40-foot yacht called Thelma capsized near Newport Beach in a turbulent sea, and he used his surfboard to swim out to the craft three times to save eight passengers from drowning. The Duke with Babe Ruth…

As a Hawaiian, he was not immune from racial prejudice. Arriving once with fellow swimmers at a restaurant in Lake Arrowhead, Calif., he was told, “We don’t serve Negroes.”

Called the “King of all Swimmers,” Duke used his réclame to help weave the ancient art of surfing — little known outside the islands, and fading even there at the time — into mainland United States popular culture. “You are rewarded with a feeling of complete freedom and independence while rocketing across the face of a wave,” Duke explained in his autobiography.

On both mainland American coasts, employing his outsize 16-foot koa wood board, Kahanamoku provided surfing demonstrations and proselytized for the sport; he made one appearance at Far Rockaway, Queens, where the 91st Street Beach was later named for him. (The name was changed in 2004 to honor Richie Allen, a firefighter who perished in the terrorist attacks of September 2001.)

Duke never achieved his dream of surfing as an Olympic event, but by the 1960s, the sport was an important part of American life, popularized by the Beach Boys, and films like “Gidget” and “Beach Blanket Bingo.” In 1999, Surfer Magazine called Kahanamoku “Surfer of the Century.”

Duke returned to Honolulu in the early 1930s and leased two Union Oil filling stations, working the pumps himself. Then in 1934, he ran successfully for county sheriff, a post he held for decades. That same year, President Franklin Roosevelt sailed into Honolulu for an official visit. Costumed as King Kamehameha the Great (who reigned from 1782 to 1819), Duke rode out merrily by double canoe to greet him, and showed F.D.R.‘s sons how to paddle an outrigger.

In the late 1930s, the sheriff fell under the spell of the tobacco heiress Doris Duke, who was building an estate called Shangri La (now a museum) near Diamond Head. In July 1940, she gave birth to a daughter named Arden, who died one day later. Several biographers have argued that the baby was almost certainly Kahanamoku’s.
Three weeks after the birth, his timing perhaps provoked by dread of a public scandal, Kahanamoku married Nadine Alexander, a Cleveland-born dance teacher at the Royal Hawaiian Hotel. Doris Duke reportedly lent or gave the newlyweds about $12,000 (now over $200,000), which they used to purchase a house not far from her own.

In 1959 — 55 years ago this week — as Kahanamoku had long called for, Hawaii joined the Union as the 50th state. Newly introduced Boeing 707 jets landed in Honolulu loaded with tourists, and the Duke, well accustomed to posing with his surfboard, became the city’s paid “Ambassador of Aloha.” He taught the hula to England’s Queen Mother Elizabeth, and as proprietor of a nightclub named for him, helped to launch the career of the Hawaiian pop crooner Don Ho.

Although never preoccupied by celebrity or fortune, Duke began lending his name for modest profit to surfing teams, competitions and equipment. One promoter gave him a Rolls-Royce with a surfboard rack on the roof. In January 1968, outside the Waikiki Yacht Club, he was looking for its keys when he was stricken by a fatal heart attack.

Still straddling two civilizations, the swimming and surfing champion was mourned at an Episcopal service before his ashes were released from an outrigger off Honolulu. The New York Times reported that many Hawaiians viewed their Duke as the fulfillment of the prophecy once issued by the revered Kamehameha “that before the native Hawaiian race died out, one man would bring it fame.”