LATEST
Home > ALL POSTS > Donations save the iconic S.S. United States from the scrapyard… 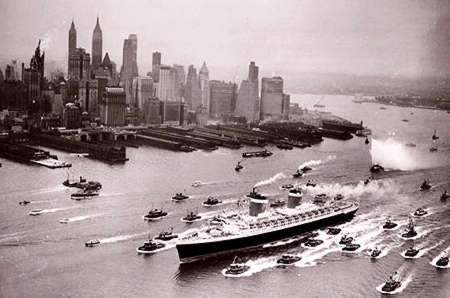 Donations save the iconic S.S. United States from the scrapyard… The S.S. United States sails away into history… On its final voyage…

• The SS United States was launched in 1952 after a secret Cold War project to build the world’s fastest ship
• Bigger than the Titanic, the ocean liner’s passengers included four US presidents, Hollywood stars and royalty
• She was retired in 1969 after carrying a million passengers and is now rusting in Philadelphia’s Delaware River
• However, conservationists had been working with developers to turn it into a museum, restaurants and shops
• They issued an SOS last month, saying the $60,000 a month needed to keep it afloat have become unsustainable

Since then, more than $600,000 has been raised from supporters from across the world, guaranteeing the ship’s future well into next year…

A historic ship that still holds the record as the fastest ever to cross the Atlantic has been spared from the scrap heap – at least temporarily.

The SS United States, once the world’s most luxurious ocean liner, now lies derelict and rusting moored at a dock in Philadelphia’s Delaware River.

Launched in 1952 after a secret Cold War project to build the world’s fastest ship – dubbed America’s Flagship – it is longer than the Titanic and transported Hollywood stars, royalty as well as four U.S. presidents.

But it was just weeks from being sold for parts last month as The SS United States Conservancy struggled to raise the $60,000 per month to keep their rehabilitation project afloat.

However, on Monday, the Conservancy announced that it had raised more than $600,000 from supporters around the world – enough to keep the ship afloat well into next year.