LATEST
Home > ALL POSTS > DINNER IN THE DINER… 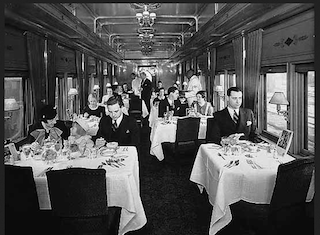 DINNER IN THE DINER…

In 1868, George M. Pullman, who had won fame as a builder of sleeping cars, introduced the first dining car… 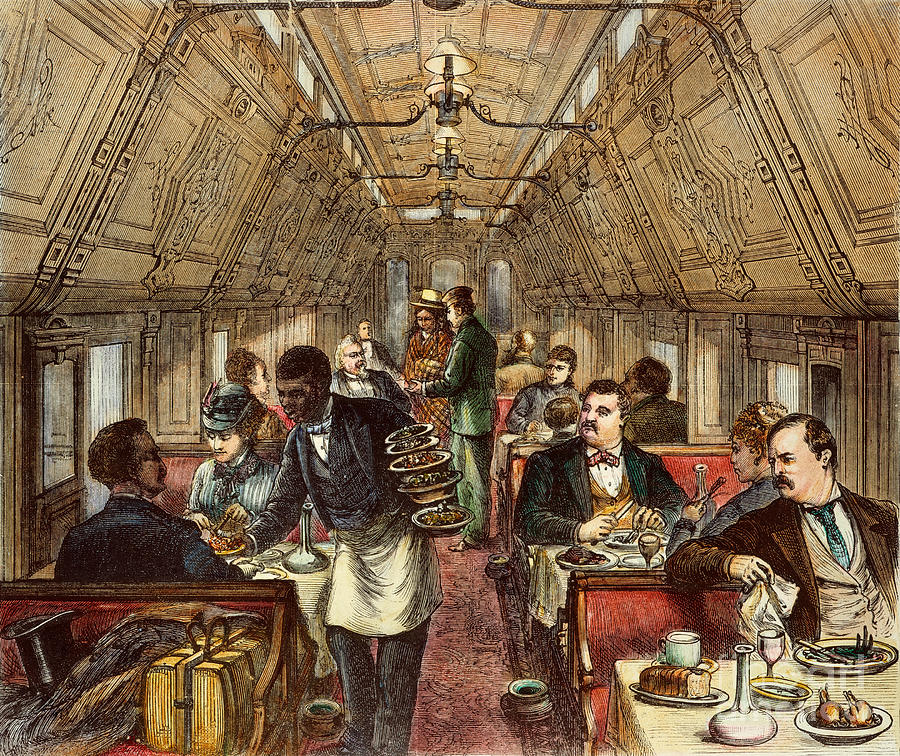 The hotel style car was equipped with a kitchen—the first passenger car designed exclusively for cooking and serving meals.

FROM DOME DINERS to PRIVATE ROOMS 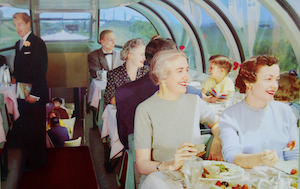 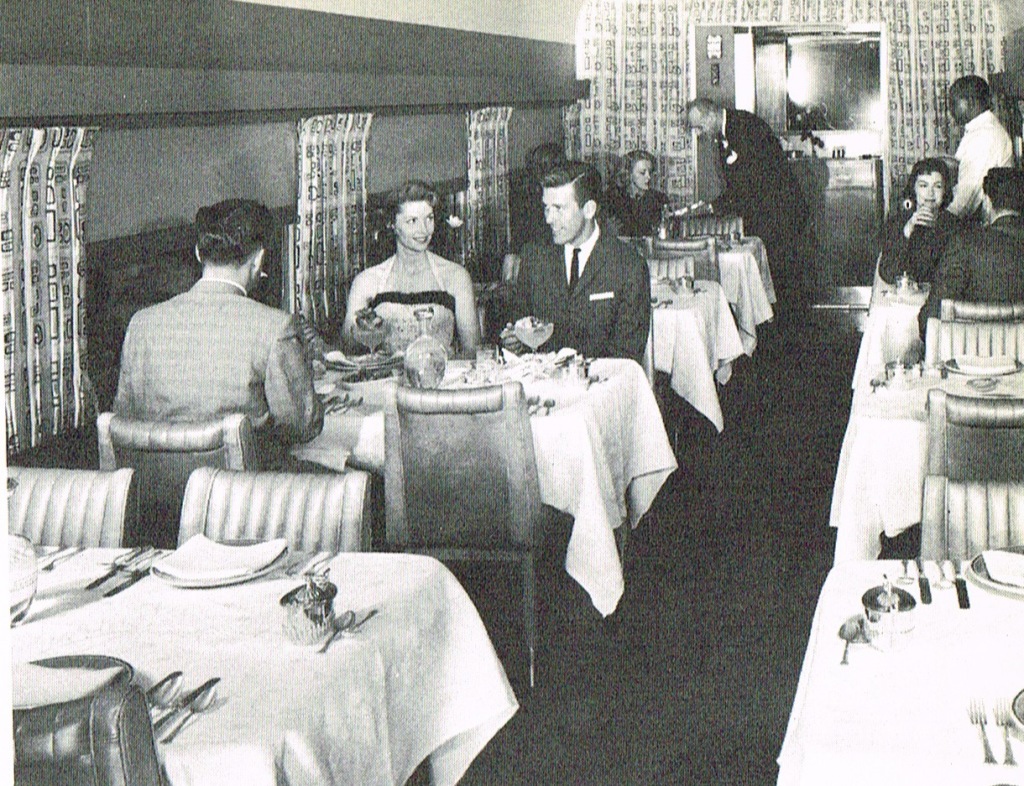 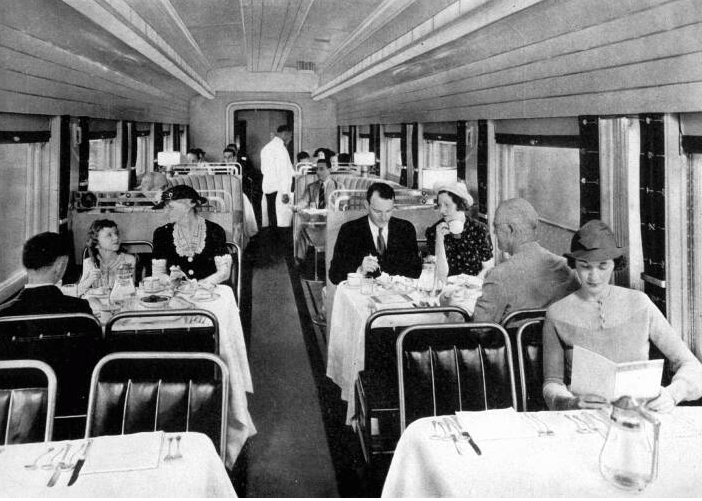 The interiors of the modern dining cars in the 1950s and 1960s were decorated in attractive style, many of them in gay pastel shades. Some have novel seating and table arrangements, including built-in lounge seats. Diffused lighting, colorful window drapes, and soft carpets suggest the friendly atmosphere of a neighborhood club or a home dining room. 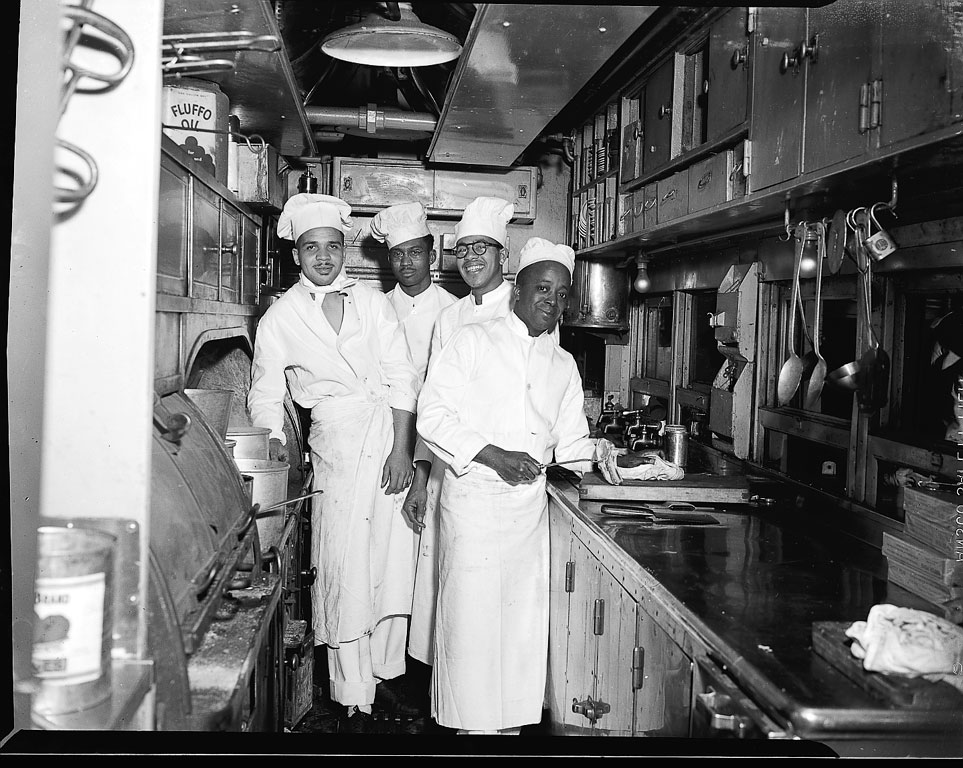 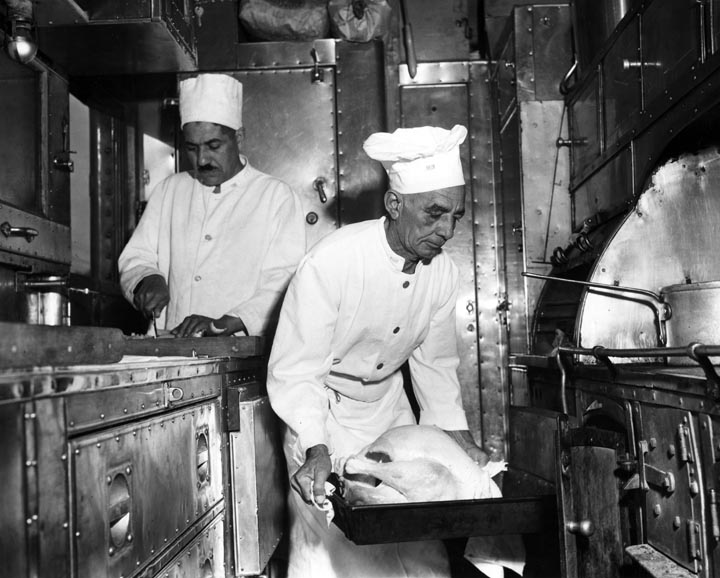 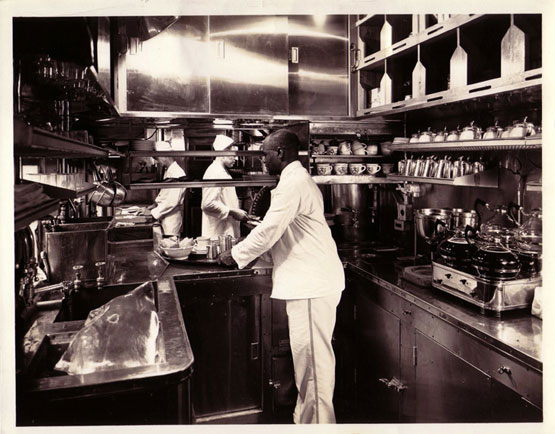 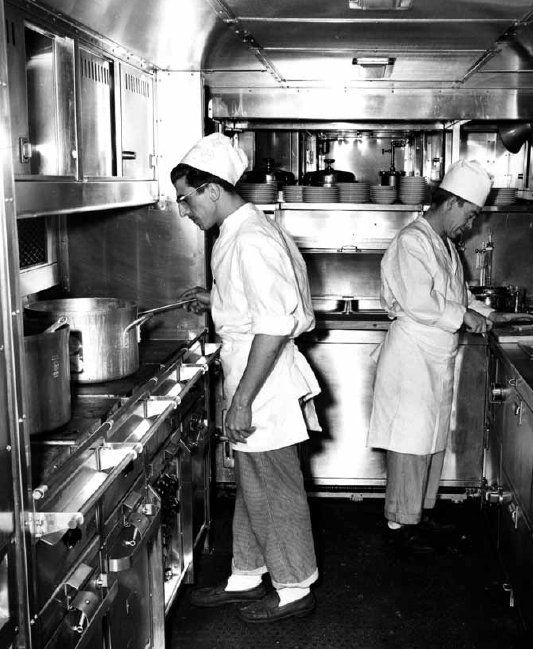 Kitchens aboard the dining car. Chefs and cooks at work. All the meals were prepared from scratch. Pies were baked aboard the trains. The best meat and fish were boarded enroute.

Tables prepared with snow-white linen, gleaming silverware, and sparkling glasses give promise of an appetizing meal to come. Air-conditioning has made dining on the train a greater pleasure than ever before. 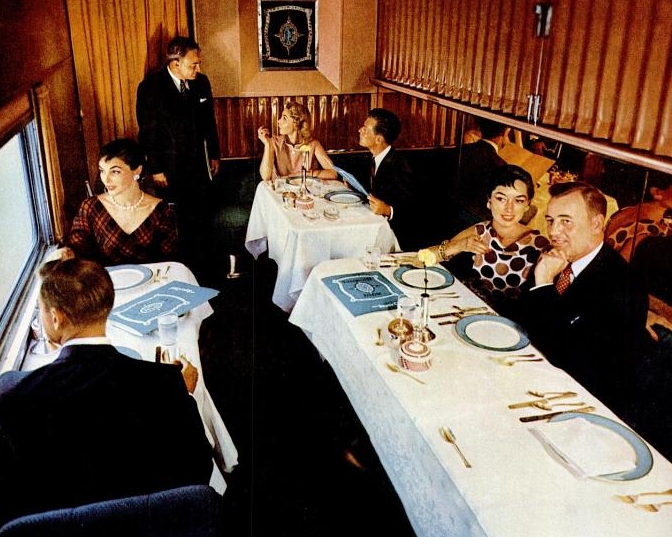 Dining car on the famed Santa Fe all-Pullman Super Chief in the Turquoise Room.  This car was very popular with film stars – like Frank Sinatra, Elizabeth Taylor and Richard Burton for privacy. 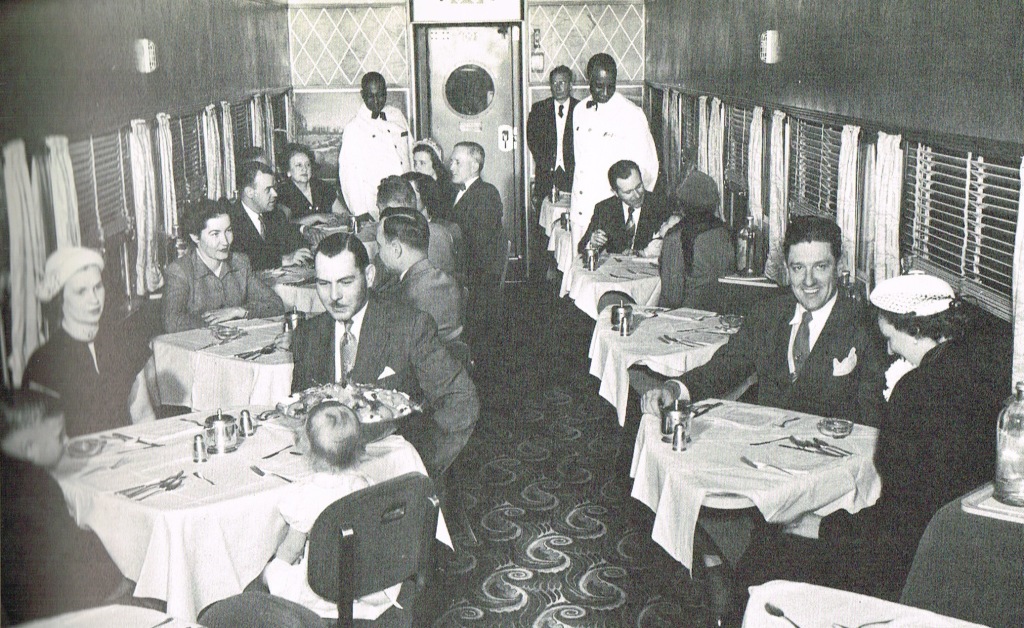 Patrons dine in the 1950s aboard a Baltimore and Ohio diner. 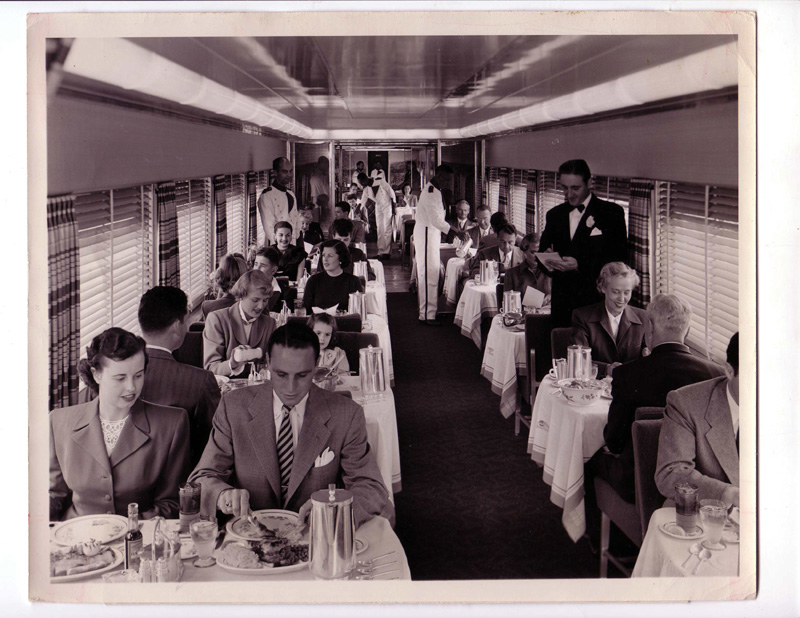 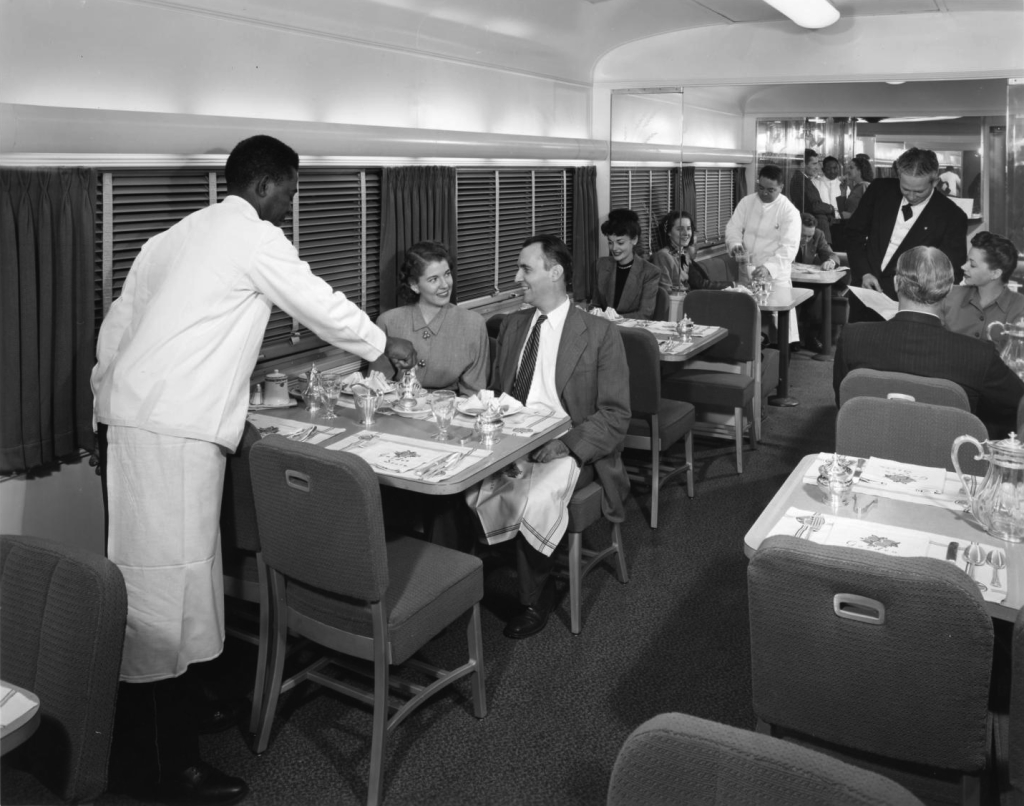 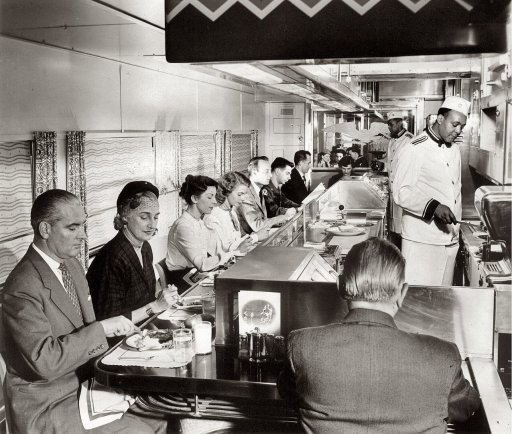 Coffee shop style dining cars were found on many all coach trains.

On some trains lunch-counter cars were operated. They specialized in light lunches or meals at popular prices. Some trains included grill cars, a combination of cafeteria and soda fountain. These cars were especially popular on overnight trains. On many trains, tray service was provided, from the dining car direct to the passengers’ seats and private Pullman accommodations. 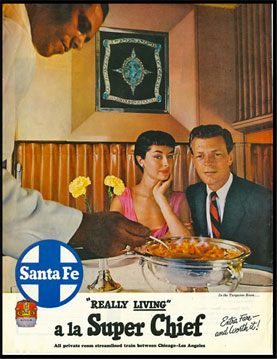 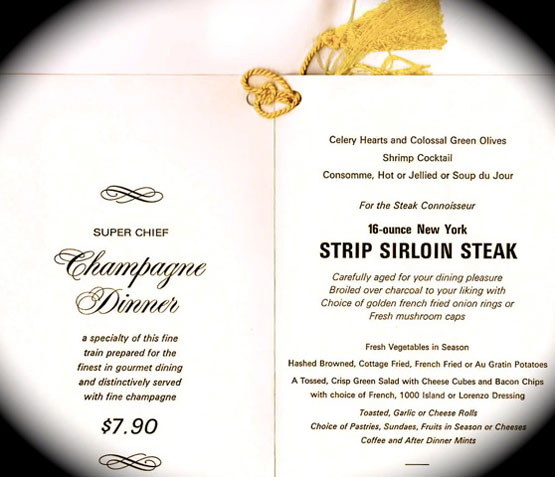 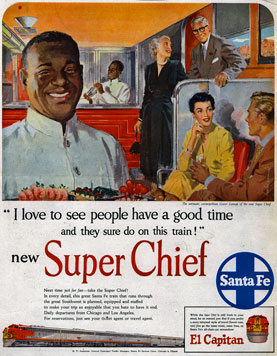 Champagne Dinner on the Super Chief… 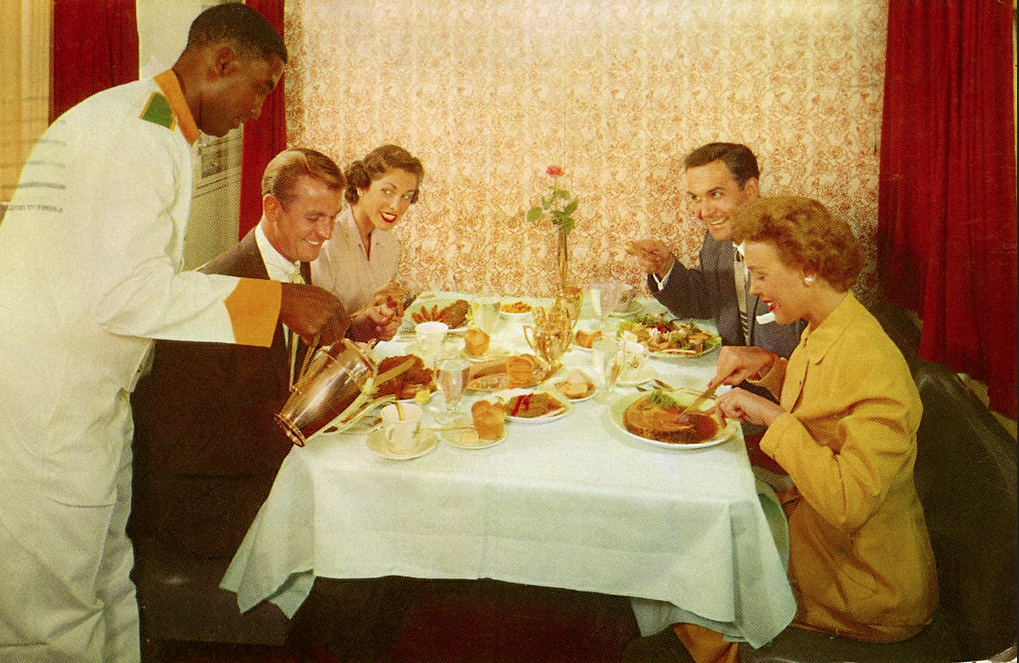 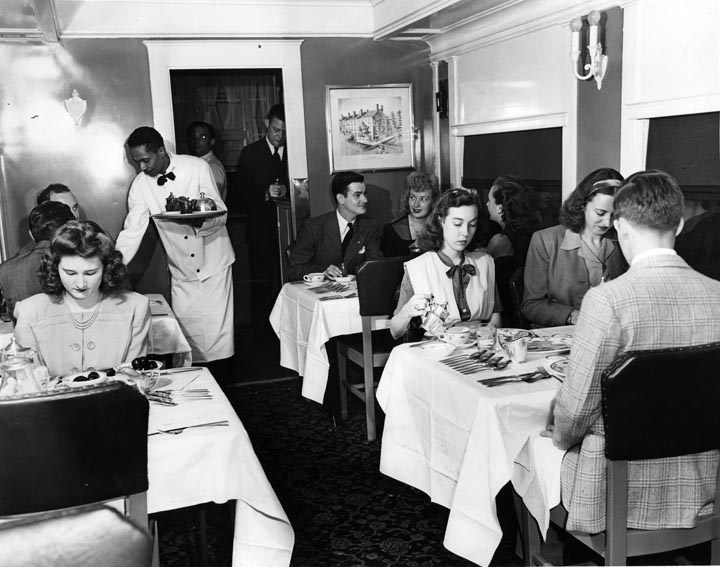 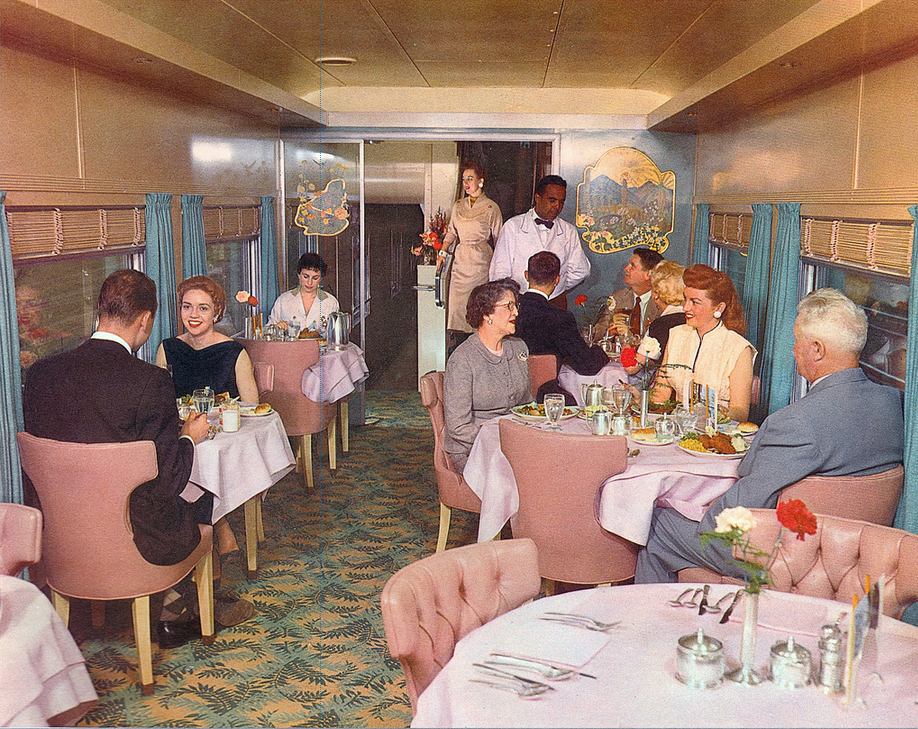 During the heyday of American passengers trains, railroads of the United States served nearly 25,000,000 meals to their patrons.

Dining car crews—stewards, chefs, cooks and waiters—were carefully selected. Each man must undergo a thorough physical examination before entering the service and at frequent intervals thereafter.

Newly employed cooks and waiters usually attended a school for dining car employees conducted by the railway company before they are allowed to go on the road. The school taught them their duties and responsibilities. They were instructed in such matters as courtesy and deportment. Only in this way were the railroads able to maintain their high standard of service. 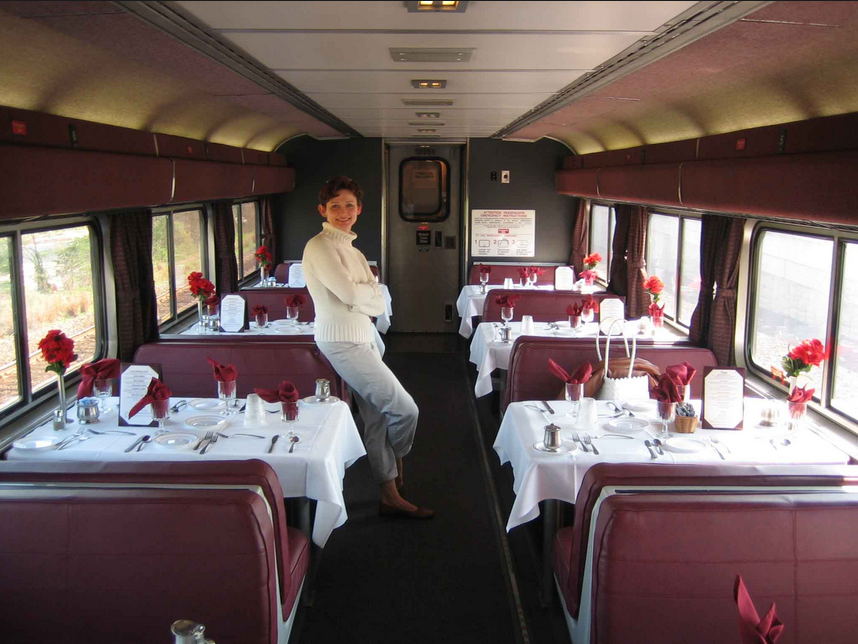