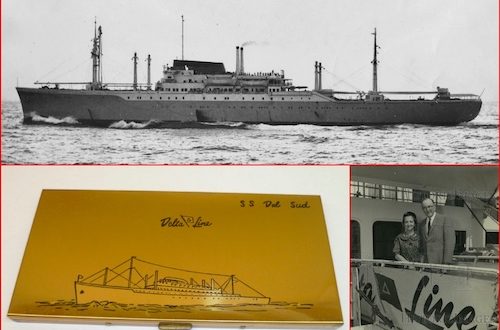 With accommodations for 120 First Class Passengers Only, the “Del Triplets” – Del Norte, Del Mar, and Del Sud – were the first modern American flag liners to be built after World War 2 and became a top choice for cruising to South America. 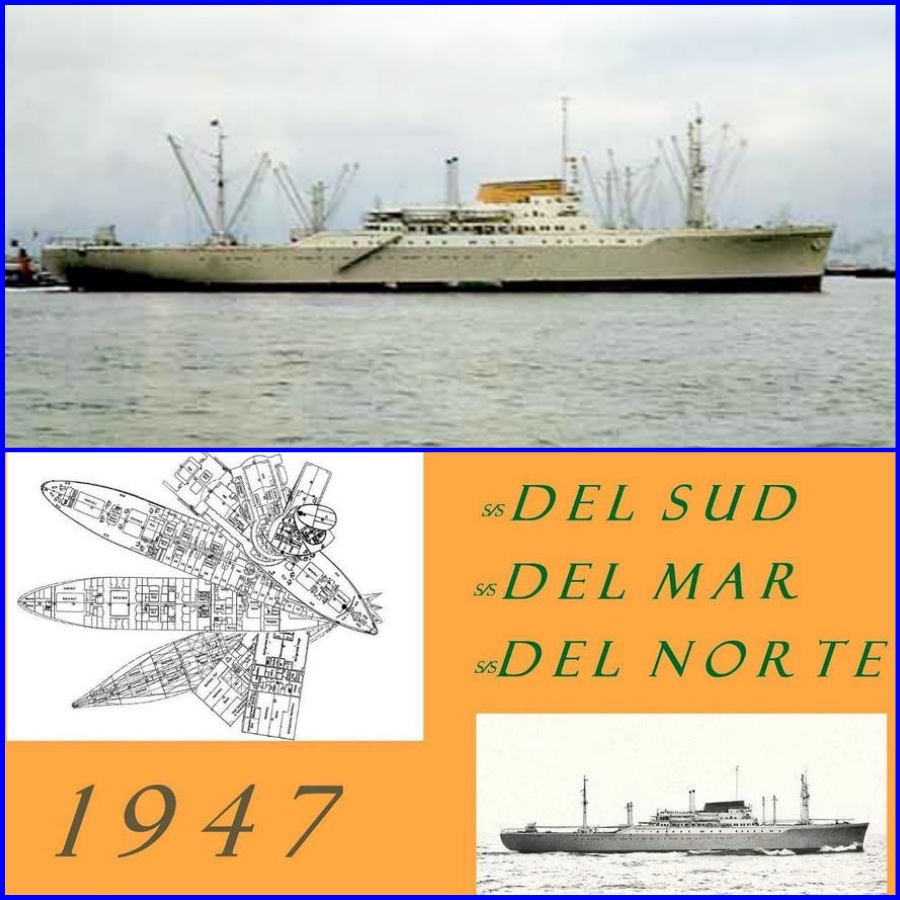 Promotion for the new ships. 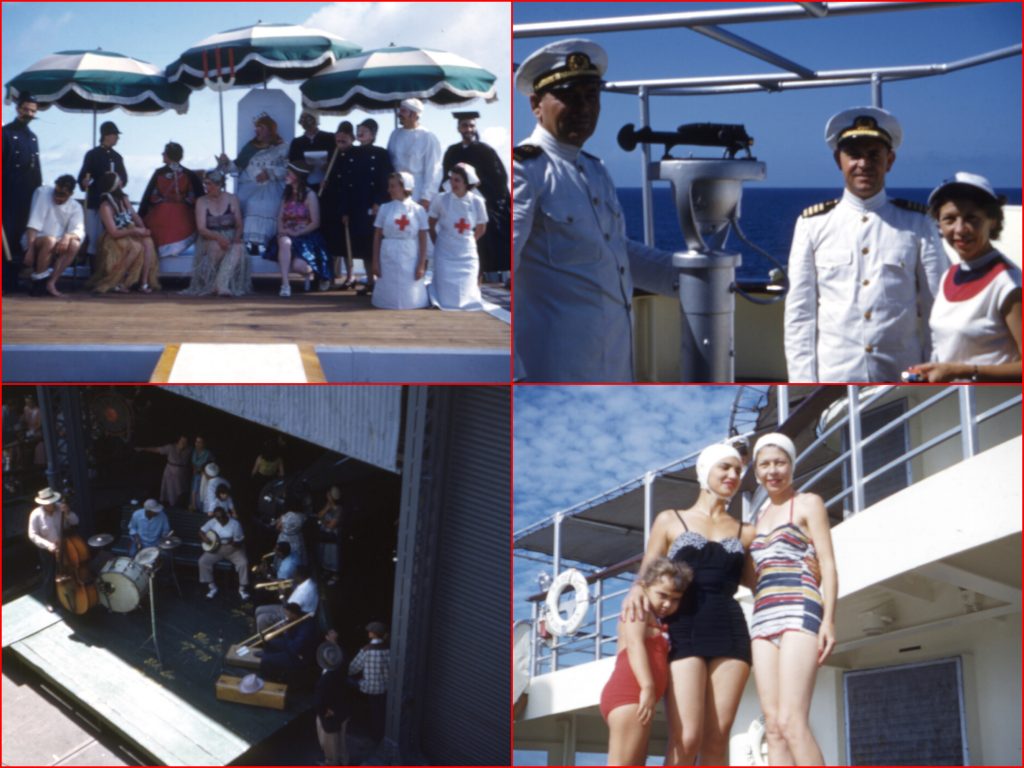 CW: Crossing the Equator Court; My aunt with officers; Band playing on departure; My aunt by the swimming pool. 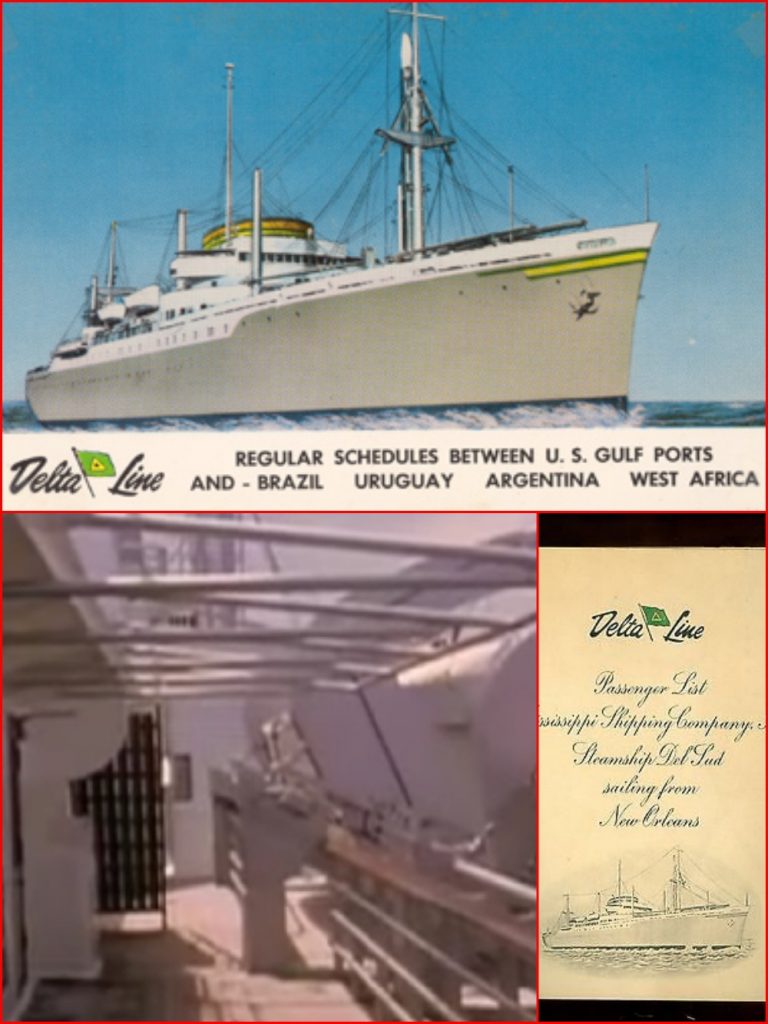 Life on board the “Dels” was definitely a leisurely affair and it was one of the hallmarks that set them apart from other ships.

My family traveled a number of times to South America aboard the Del Sud and Del Mar. 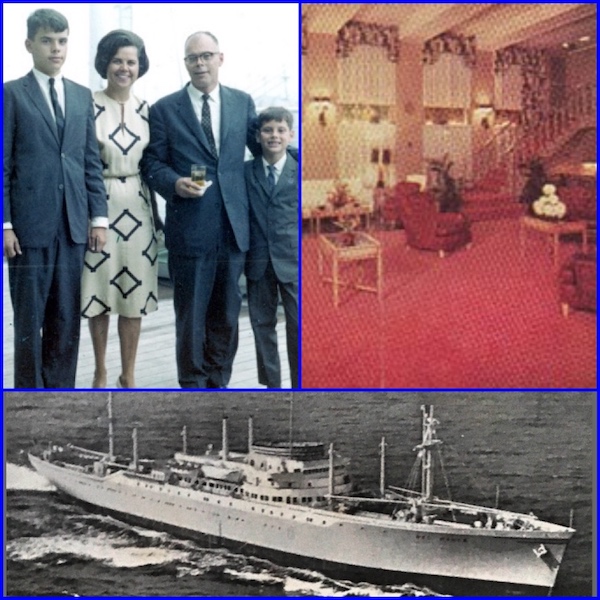 More views of the main lounge. 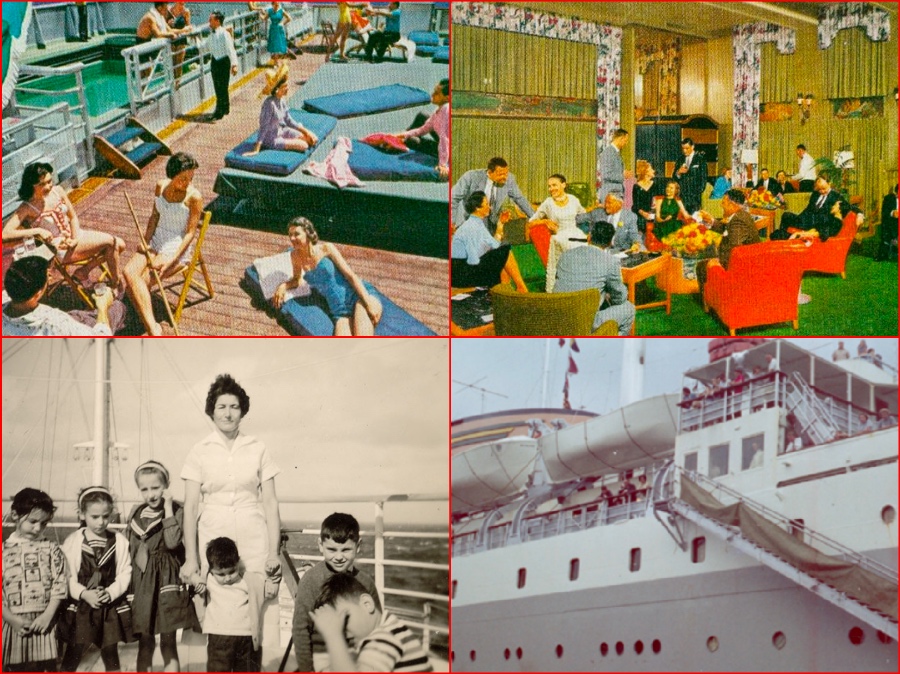 DAYS AT SEA WHERE LAZY AND RELAXED

Days were lazy and relaxed with games available on the sports deck or a long siesta in one of the comfortable lounge chairs awaiting passengers out of the wind’s way on the aft deck with a nearby outdoor bar and café.

Where the innovative design of the sisters was most apparent was on deck. One of the dominant features of the new ships along those lines was the huge funnel.

In a salute to their modernity, the vessels were among the first commercial ships of the world to be equipped with post-war radar, highly refined after stringent wartime use.

Santos was the second port of call in Brazil and held a special and highly coveted place in Delta’s post-war cargo trade. It was the world’s leading coffee loading port and American consumption of the aromatic bean had made Delta Line the globe’s largest coffee carrier.

So popular and useful were they that Delta Line ships were known as the “Coffee Fleet”. After leaving Santos the ships sailed on to Montevideo, Paranagua and finally its destination of Buenos Aires.

The “Dels” set a pattern and for twenty years the three light grey-hulled vessels carried a steady following of passengers, including the rich and famous, maintaining this set schedule and route.

Unfortunately, just as the sisters reached their twenty year anniversary of superlative, loyal and unbroken service, economic difficulties were seen looming on the not too distant horizon.

This was but a short respite from the inevitable. Once considered the cutting edge of their kind but no longer viable, they were now out of date. In fact, a new breed of ship was being built and the “Dels” fell way short in comparison with the competitive new “container ship” concept.

In early 1972 the three ships, now twenty-five years of age, were placed on a one-way charter run to Indonesia, one that eventually took them on to scrapping in Taiwan.

When it came time for S.S. Del Norte, the first of her class to be completed, to make her final departure from New Orleans she seemed reluctant to leave. It was not once but twice that she swung back snug to the wharf before the combined efforts of the river tugs, the pilot and the captain finally and most reluctantly eased her out into the river for the final voyage to the scrappers.

Granted the “Dels” had served a useful and profitable life, but sadly the “Grey Ladies” were gone way too soon and long before their time and they are still missed along with their former ports of call to this day.