At least four people are dead and nearly 300 missing after a ferry boat sank off South Korea’s southern coast Wednesday. Authorities initially reported most of the passengers were rescued but quickly backtracked and raised casualty figures dramatically as the scale of the tragedy became clear. 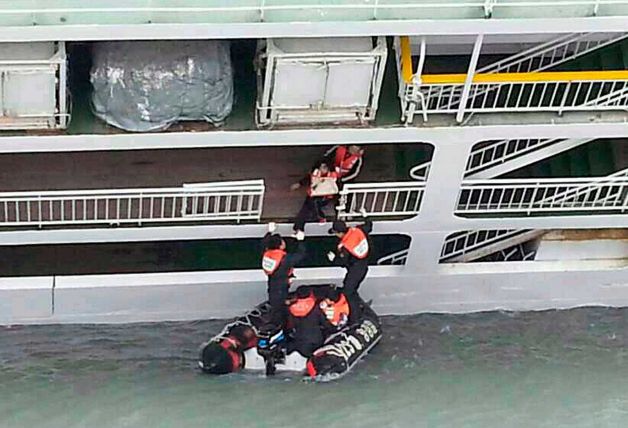 The passenger ferry was carrying more than 462 people on board, most of them high school students, when it sent out a distress signal at 9:00 a.m. South Korean officials said… 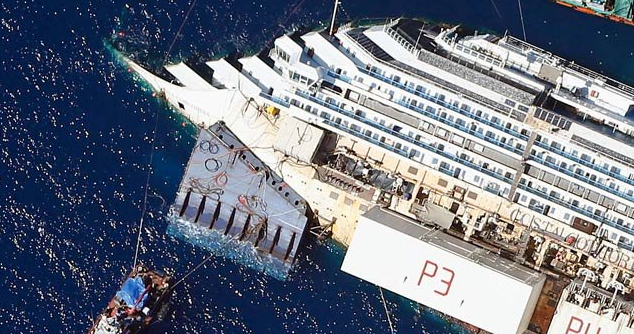 CRUISING THE PAST thanks Rob Alemida for the following story…

As an exclamation point on the seriousness of the tragedy unfolding offshore South Korea, the sunken RoRo-Passenger (RoPax) vessel Sewol is officially the 100th passenger vessel lost since 2002.

The exact cause of this vessel’s demise is unclear, however one thing is rather clear – she lost stability and sank taking with her a significant number of passengers.

The initial pictures that came out on local Korean news stations showed a scenario visually similar to the Costa Concordia as she began to sink off Giglio in 2012, however there are some distinct differences.

1) The Costa Concordia was a new vessel, the Sewol was not.

Sewol was built in June 1994 by Hayashikane Dockyard Co, in Japan to Korean Register class – a member of the International Association of Classficiation Societies (IACS).  In March 2013, the vessel went through a very thorough inspection called a “Special Survey” where every inch of the vessel was inspected by class surveyors to ensure compliance to international safety and material condition requirements.

It’s unknown whether or not the condition of the vessel was a factor in this incident and we’ve reached out to the Korean Register for information on that particular survey.

2) The Costa Concordia was specifically built for passengers only – the Sewol carries passengers and vehicles.

Ships that carry vehicles require a significant amount of flat space to park those vehicles.  This open area is also located relatively close to the waterline.  In sinking incidents which have befallen similar ships such as the Herald of Free Enterprise and Estonia, both of which resulted in a significant number of deaths, the primary cause was due to loss of stability from the “free surface affect” of having water sloshing around these large open compartments.

When even an inch or two of water covers the decks of these open compartments, the destabilizing affect is immediate.  In 1987, when water poured into the Herald of Free Enterprise, covering her cargo hold, she capsized in 90 seconds, killing 193 passengers and crew.

This danger inherent to RoPax vessels such as the Sewol was most certainly not apparent to the passengers who were aboard.

Following the Costa Concordia disaster, amendments were made to the International Convention for the Safety of Life at Sea (SOLAS) regulation III/19 which requires musters of newly-embarked passengers prior to or immediately upon departure, instead of “within 24 hours”, as stated in the current regulations.

This amendment is not expected to enter into force until 2015 however.

Considering the lack of deployed lifeboats from the Sewol, it seems quite possible the passengers didn’t know where to go or what to do when the incident occurred.

Lesson to be Learned

Statistically-speaking, there’s a really good chance this won’t be the last ferry disaster of 2014.  Ferries all over the world are being operated far beyond their useful lives or outside their operational envelopes with far too many people on board.

For ferry and passenger vessel operators who are serious about protecting the lives of their passengers, they need to really dig deep into analyzing the risks of their operations and come up with solutions to mitigate them.

I believe that these risks and mitigating actions should be detailed and submitted to their respective Flag State for review and tracked on a ship-by-ship basis to ensure that the operators do what they say they will do.

Learn more by checking out gCaptain.com