The Steamship Liner S.S. Nieuw Amsterdam was a Dutch ocean liner built in Rotterdam for the Holland America Line.

To this day SS Nieuw Amsterdam is still regarded as one of the most beautiful ships to be built. With her stunning silhouette she was a well balanced ship. Her elegant lines were highlighted with her black hull, as well as her two perfectly proportioned funnels and two tall masts. At the time, she was also the largest Dutch ship to be built.

Originally she was to be named Prinsendam, however during construction, Holland America Line (HAL) decided to name their new flagship Nieuw Amsterdam, in honor the settlement of the Dutch in Nieuw Amsterdam, today’s City of New York. Nieuw Amsterdam was also given the honor of being the Dutch “Ship of State.” Unlike other ships of her time being built (especially British and American ships) her design did not include any military ingredient, despite the threateningpolitical situation of the day. SS Nieuw Amsterdam was launched by HRH Queen Wilhelmina on April 10, 1937 and was completed on March 21, 1938. 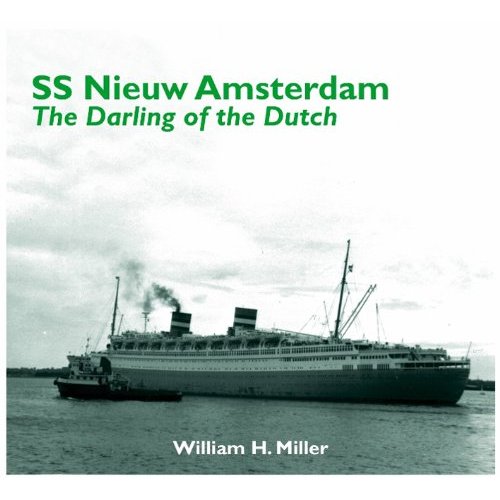 William H. Miller’s new book on the HAL liner can be pre-ordered by clicking here.

She was often affectionately nicknamed the “Darling of the Dutch” and was truly a most elegant and handsome ship.   Nieuw Amsterdam quickly became famed for new standards being set, with her interior design and magnificent Art Deco décor was far superior to anything seen before. Her interiors were decorated in pastel colors and although she had spacious public rooms, the color scheme used gave her an even larger feel. Her first class restaurant was her most celebrated room, having a Moroccan leather ceiling and Murano-glass lighting fixtures, columns overlaid in gold leaf, her walls were in Ivory, all this and with tinted mirrors, and superb satinwood furniture, this was one of the finest Art Deco restaurants afloat. Located on Promenade Deck immediately aft of the Smoking Room was the delightful Stuyvesant Cafè, a popular venue indeed. There were two swimming pools on-board, one outdoor and the other indoors on E-deck. It featured an expensive Delft tiled which was an impressive sight

This much loved Holland America Line ship had a most eventful career including service as a troopship during the Second World War but was eventually retired from service and scrapped in 1974.