Built in a shipyard in northern Italy, the latest addition to the Cunard fleet, the liner replaces the Queen Elizabeth 2 (QE2) which made its last transatlantic crossing in 2008. 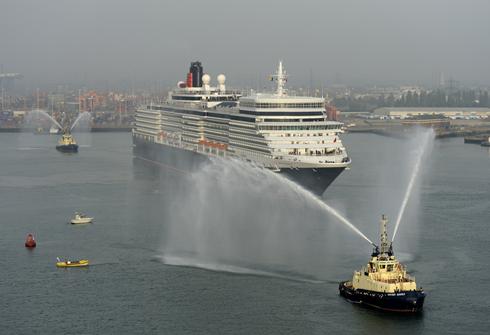 Making cruise line history, Cunard’s much-awaited new ocean liner, the 2,092-passenger QUEEN ELIZABETH, arrived in Southampton, England today to a hero’s welcome.  Thousands of local residents and Cunard fans turned out to cheer the $500 million vessel as it sailed into its new home port for the first time.   The 92,400-ton ship is the successor to the recently retired QE2 and RMS Queen Elizabeth.  It will be christened on Monday by the the Queen at an invitation-only royal ceremony along Southampton’s waterfront.  The Queen, notably, is reprising a role she played in 1967 at the debut of the QE2.

Would you like to travel on the most modern cruise and yet feel like you have traveled back in time? I know many of us would like to experience the golden days of striped blazers and boaters, lawn bowls and paddle tennis on deck, and of course the occasional tea dance and jitterbug evenings. Well, look no further as Cunard’s brand new Queen Elizabeth liner promises to satisfy your thirst for the good old days. The ocean liner will take you back 70 years when she makes her maiden voyage in October next year. The £365million ($513 million) ship will attempt to recall those halcyon days when the first of the Queen Elizabeth liners ruled the waves. Currently being built in Italy, this ship is set to become a flagship liner for Britain. Even though she succeeds the recently retired QE2 and is sister to Cunard’s Queen Victoria and Queen Mary 2, she will not be called the QE 3. This is because the company wants to keep the nostalgia alive.

A luxury liner, it will be able to accommodate 2,092 guests, will have a West End-style theatre with private boxes, a 4,000 sq ft shopping arcade, a games deck featuring a bowls green and croquet lawn, plus a 10,000 sq ft spa and fitness centre. A total of 85 per cent of the berths will boast outside views and 71 per cent will have balconies. The interior will boast what the company described as an ‘art deco flourish’, plus some solid, traditional materials such as oak, mahogany, stained glass and marble. Guests will be treated to 1940’s dances and balls and even classic films of that era.

And yes, keeping with the tradition a member of the Royal family will formally name the ship when she is completed after sea trials in summer 2010. Her maiden voyage begins on October 12 next year when she will travel from Southampton to the islands of the Atlantic. The 13-night voyage will include stops at Lisbon, Tenerife and Madeira with fares ranging from £1,489 ($2,093) up to almost £16,000 ($22,493) per person for one of the grand suites. This liner promises an experience like no other. RMS Queen Elizabeth 2, often referred to simply as the ‘QE2’, is an ocean liner that was operated by Cunard from 1969 to 2008. Following her retirement from cruising, she is now owned by Nakheel (a division of Dubai World). She was designed to primarily run a transatlantic service from her homeport of Southampton, England, to New York, USA, and was named after the earlier Cunard liner RMS Queen Elizabeth (see Name section), and served as the flagship of the line from 1969 until succeeded by RMS Queen Mary 2 in 2004. Designed in Cunard’s then-headquarters and regional offices in Liverpool and Southampton respectively, and built in Clydebank, Scotland, she was considered the last of the great transatlantic ocean liners until the construction of the QM2 was announced.

Before she was refitted with a diesel power plant in 1986/87, QE2 was also the last oil fired passenger steamship to cross the Atlantic in scheduled liner service. During almost forty years of service, the QE2 undertook regular world cruises and latterly operated predominantly as a cruise ship, sailing out of Southampton, England. QE2 had no identical sister ship or running mate and never ran a year round weekly transatlantic express service to New York. QE2 did, however, continue the Cunard tradition of regular scheduled transatlantic crossings every year of her service life.
QE2 retired from active Cunard service on 27 November 2008, where it was planned for her to begin conversion to a floating hotel which would have seen her eventually moored at the Palm Jumeirah, Dubai. However, as of October 2010 she remains moored at Port Rashid awaiting an uncertain future. 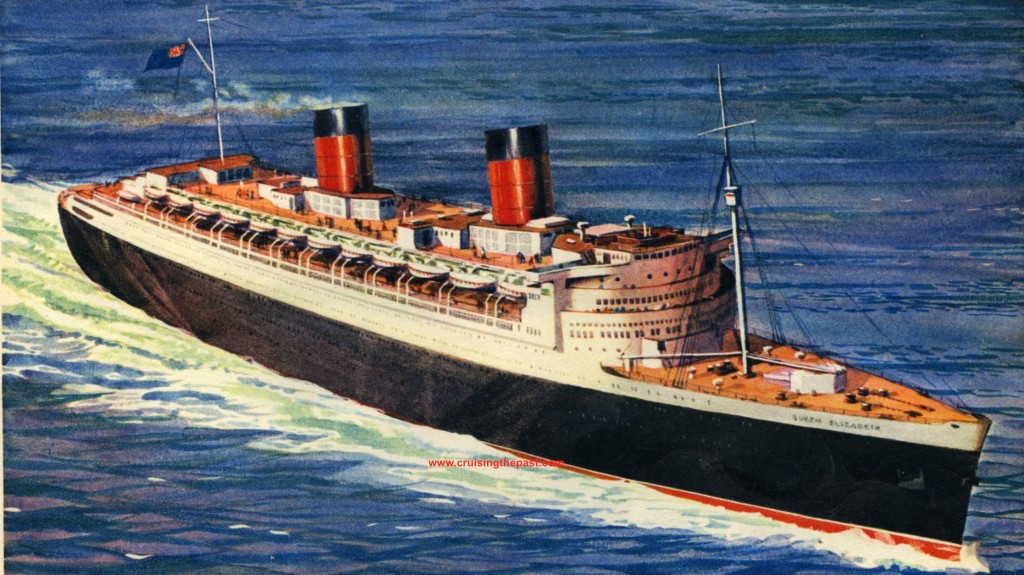 RMS Queen Elizabeth was an ocean liner operated by the Cunard Line and was contracted to carry Royal Mail as the second half of a two-ship weekly express service between Southampton and New York City via Cherbourg.
At the time of construction in the mid-1930s by John Brown and Company in Clydebank, Scotland, she was known as Hull 552, but she was later named in honor of Queen Elizabeth, Queen Consort at the time of her launch on 27 September 1938, and in 1952 became the Queen Mother. Queen Elizabeth was a slightly larger ship with an improved design over her running mate, Queen Mary, making her the largest passenger liner ever built at that time, which was a record that would not be exceeded for fifty-six years.
She first entered service in February 1940 as a troopship in the Second World War, and it was not until October 1946 that she served in her intended role as an ocean liner.

Together with Queen Mary, Queen Elizabeth maintained a two ship weekly transatlantic service from Southampton to New York for over twenty years. With the decline in the popularity of these routes, both ships were replaced by RMS Queen Elizabeth 2 in 1969.

She was retired from service in November 1968, and was sold to a succession of buyers, most of whom had adventurous and unsuccessful plans for her. Finally she was sold to a Hong Kong businessmen who intended to convert her into a floating University cruise ship. In 1972 whilst undergoing renovations in Hong Kong harbor, she set on fire and capsized. In 1973, her wreck was deemed an obstruction, and she was scrapped where she lay.