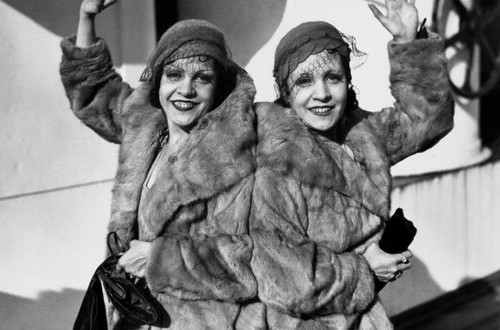 Famous Siamese twins, Violet, left, and Daisy Hilton of Texas, pictured aboard the S.S. Aquitania upon return from a theatrical performance in England.

Great video of the RMS AQUITANIA…

It was announced in February 1914 that Captain William Turner would be the first master of the ship. The Aquitania’s passenger accommodation was superior to anything seen on the North Atlantic before. The first class drawing room was decorated in the Adam style, copied from certain features in Landsdowne House in London.
The walls were adorned with prints of English seaports and portraits of Royalty and prominent people of the day. The smoking room was modeled on Greenwich Hospital with oak panelling and beams, the restaurant was decorated in Louis XIV style and the grill room was decorated in Jacobean style. With public rooms of this standard and passenger cabins superior to those on previous Cunarders it was no surprise that the Aquitania became one of the best-known Cunard liners. The Aquitania left Liverpool on its maiden voyage on 30 May 1914, bound for New York. The tragic loss of the Empress of Ireland, and 1,000 of those on board, the day before overshadowed this event. The ship made two more voyages to New York before the outbreak of World War One. It was then requisitioned by the Government to serve as an armed merchant cruiser and was converted for this role in Liverpool. It was then commissioned into the Royal Navy on 7 August and its first assignment was to patrol the Western Approaches, returning to the Mersey on 16 August.

On its next voyage in this role it collided with the Leyland ship Canadian on 22 August, during thick fog, and had to return to Liverpool. The subsequent enquiry concluded that the Aquitania was too large to be used as an armed merchant cruiser. Repair work on the ship was finished by the end of 1914. On 18 June 1915 it was again requisitioned by the Government, this time to serve as a troopship and assist in the Gallpoli campaign. On 25 June it left Liverpool with a full complement of over 5,000 troops on board. After three voyages as a troop transport it was then converted into a hospital ship and served this role during December 1915 and January 1916.
On 10 April 1916 it was de-commissioned from Government service and was reconditioned by Harland & Wolff in order to return to Cunard service. When this was almost complete the Government was forced to requisition the Aquitania once again to serve as a hospital ship in November 1916. The ship served in the Mediterranean for the rest of the year and was then anchored in the Solent for the whole of 1917. The entry of the USA into the war in December 1917 brought the ship back into service to transport the American Expeditionary Force. After the war it was also used in the repatriation of Canadian troops. From November 1919 until June 1920 the ship underwent an extensive refit at Armstrong Whitworth & Co on the Tyne. Whilst this was being done the opportunity was taken to convert the ship to oil burning, as opposed to coal. After trials north of Scotland, it made its next voyage from Liverpool to New York on 17 July. After returning from this the ship was to operate on the Southampton-Cherbourg-New York route, along with the Mauretania andBerengaria. During annual winter refits in 1926 1927 and 1928 the passenger accommodation was extensively modernized. In 1930 it was even used as an art gallery for one voyage.

In 1932 the Aquitania was used as a cruise ship for the first time. It left New York on 3 February and cruised around the Mediterranean. Further cruises on this route and New York-Bermuda route were accomplished later in the year. In November the ship underwent considerable internal reconstruction. First class accommodation was reduced to 650, tourist class was enlarged but the passenger accommodation reduced to 600 and third class was altered to cater for 950 passengers. All public rooms were renovated and a theatre was added. For the rest of the period up until the Second World War it continued a mixture of Atlantic crossings and cruises. The Aquitania was then requisitioned as a troop transport on 21 November 1939. At first it was used to transport Canadian troops. During 1940 it underwent a refit in America and was defensively armed with six inch guns. From March onwards it was based in Sydney transporting Australian and New Zealand troops, also making two passages between Pearl Harbour and San Francisco. For the remainder of the war it was employed on the Atlantic, and after the war had ended in the repatriation on Canadian and American troops. Later it was also used to to carry the wives and children of Canadian servicemen over to Canada.

On April 1 1948 it was released by the Ministry of Transport and returned to Cunard. It was then chartered by the Canadian Government to carry Canadian emigrants between Southampton and Halifax. This contract was renewed in 1949. By 1 December 1949 this role had been fulfilled and later that month Cunard announced that the Aquitania would be withdrawn from service. On 9 January 1950 Messrs Hampton & Sons Ltd were employed to auction the vessels furnishings and equipment. Later that month the ship was sold to the British Iron & Steel Corporation Ltd for £125,000. The ship then sailed from Southampton to Faslane, in Scotland where she was broken up.