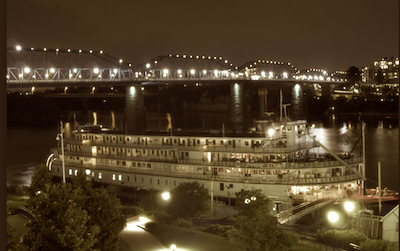 Cruises in America and Canada during the 1950s

For the traveler who couldn’t make a long ocean voyage during the early 1950s, there were still varied trips by water in the USA and Canada. Some were short one-day sails, while others took a week or more and led to some exciting adventures. Most were Canadian flag vessels.

Here are some of the travel choices for the fifties cruiser… The Tadoussac sailing out of Montreal. From the 1930’s until 1965 Canada Steamship Lines operated cruises from Montreal up the Saguenay River. These beautiful white ships were known as the “Great White Fleet.”

These beautiful white ships were known as the “Great White Fleet.”\ Onlookers greet the Quebec, a 1950s passenger ship in the Great White Fleet, that transported tourists to CSL hotels downriver from Montreal.

One of the stops was Tadoussac. Here passengers could get off the ships for an hour or two and stroll into the town. Some elected to stay at the Tadoussac Hotel that was owned by CSL. For a trip off the proverbial peahen path, you could take one of the Clarke Line’s yacht-like ships, such as the North Gaspe from Montreal to the little towns down the St. Lawrence and up the Gulf Coast into the Minigan and Harrington areas.

A vessel of the Clarke Steamship Company, the North Gaspé supplied the villages on the North Shore of Quebec.

As the company’s premier post-war passenger ship, at 208 feet in length overall and with a beam of 33 feet, the North Shore was painted with a white hull and green boot-topping. . A green riband was later added, after her delivery voyage to Quebec and Montreal. With accommodation for 48 first- and 28 second-class passengers, and 19 on deck, she had a crew of 49, including deck, engine and steward departments.

The St Lawrence River, a pre-eminent shipping route and fundamental natural resource, saw many ships on its waters despite the war. Many remote regions, such as the North Shore, depended on boats for their supplies. Aboard the passenger vessels, there were as many passengers as there were reasons to travel. The two inland liners North America and South America left from Chicago and Buffalo for cruising on the Great Lakes. The sternwheeler Delta Queen could take you from New Orleans on the Mississippi River.