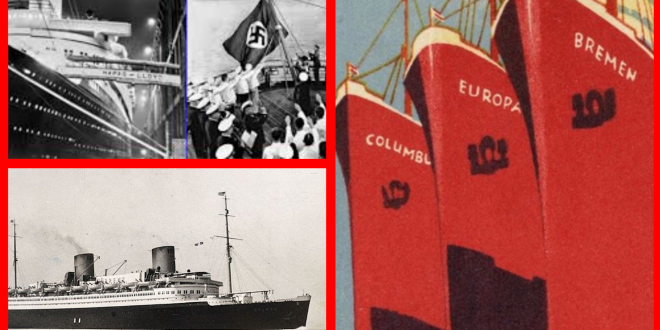 The great German liner Bremen, which ran a British blockade, ended her career in a scrapyard. 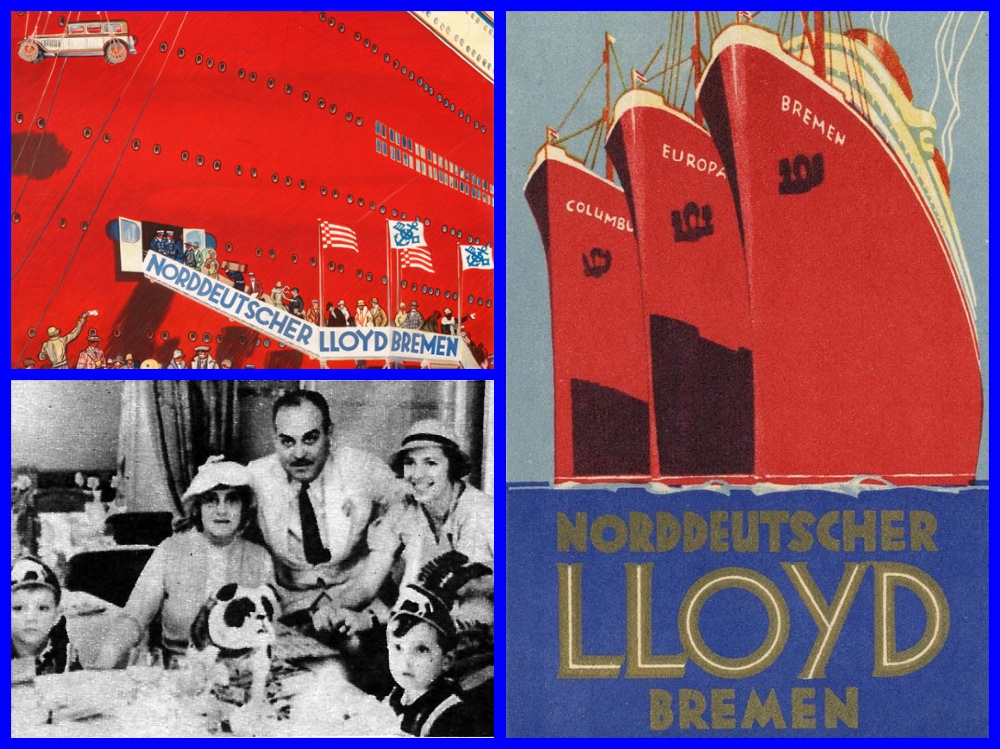 It proved to be the longest journey the Bremen had ever undertaken. After a dangerous three-month odyssey, the luxury liner finally returned to her mooring at Bremerhaven’s Columbus Quay. Ahrens relied on skillful seamanship, good fortune, and the assistance of Nazi Germany’s ally at the war’s onset, the Soviet Union. 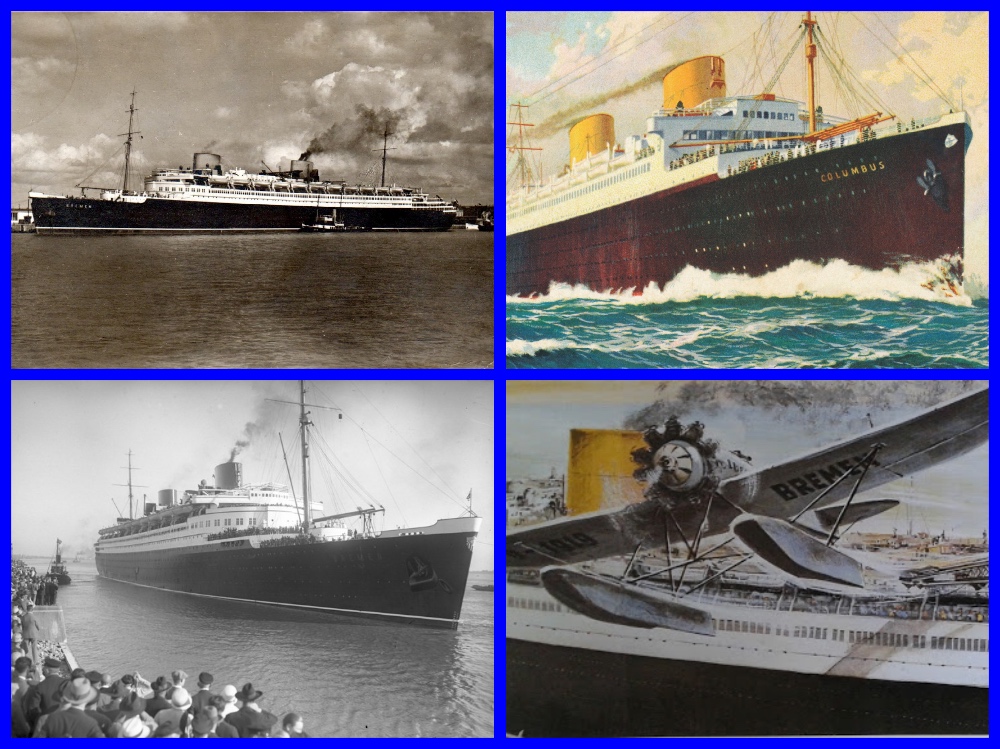 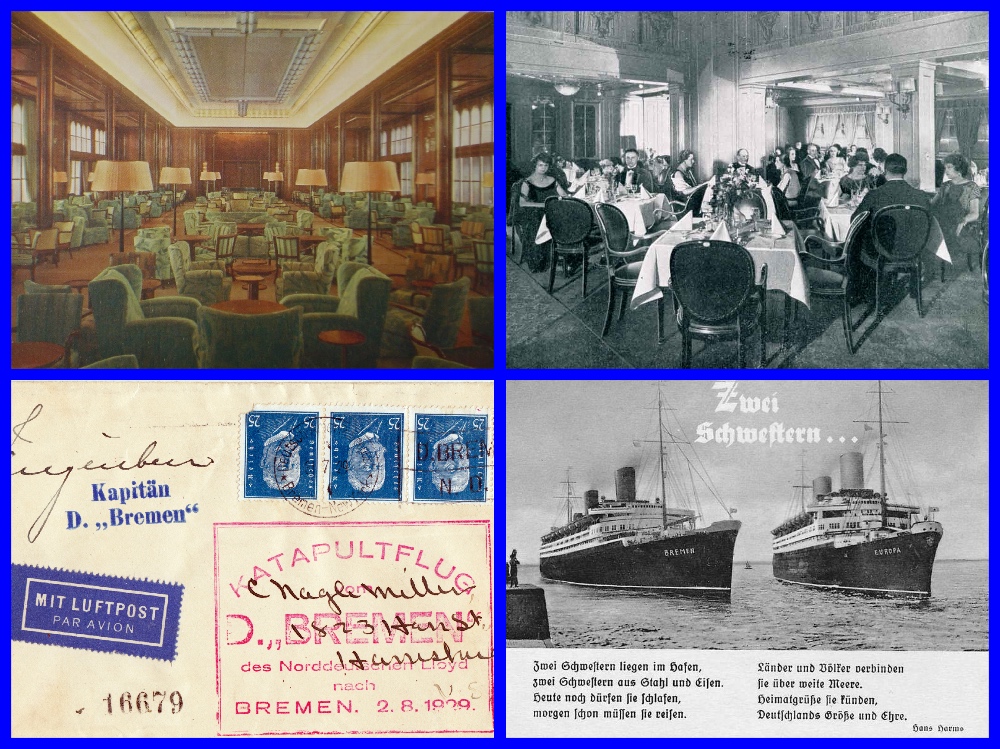 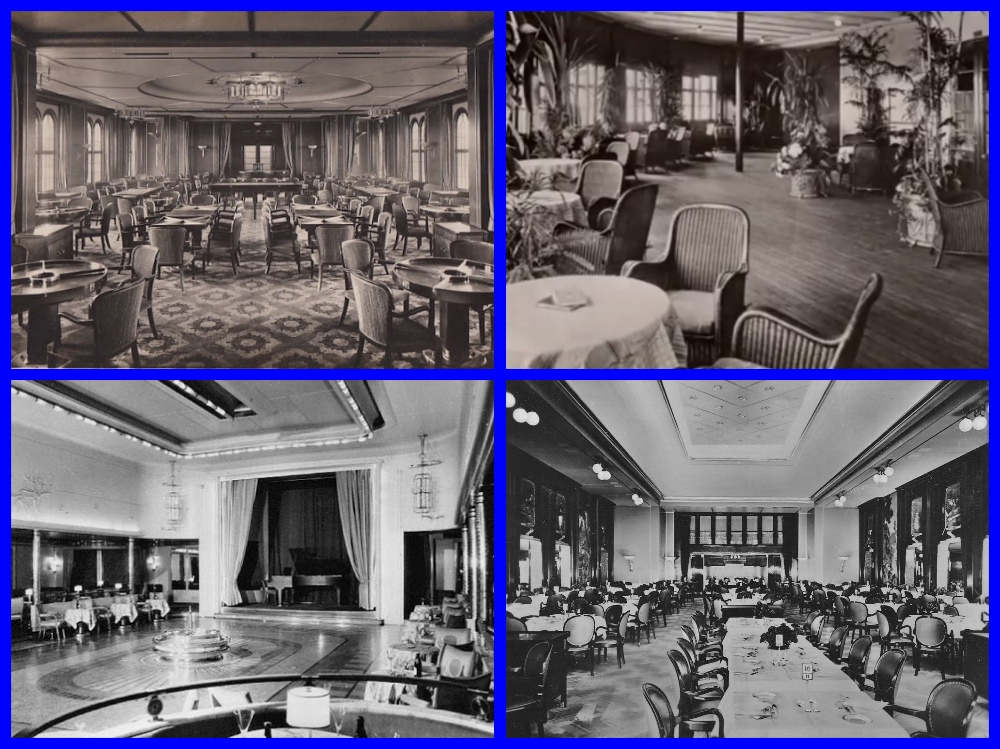 The German liner appeared on the seas only months before the Wall Street stock market crash of October 1929, which caused a global depression and created circumstances favorable for the rise of Adolf Hitler.

In a bid to retain foreign clients and to polish Germany’s image as a modern, moderate state, it was the expressed policy of German shipping lines to downplay Nazism. Except for the swastika flag fluttering from the stern, the Nazi takeover brought few changes to the Bremen from the passenger’s perspective. Arriving in America Against Orders

On the evening of August 25 at 56 degrees longitude, the Bremen received word from Germany that all German ships on the high seas were to return to home port before the outbreak of war. Captain Ahrens ignored the order and continued sailing for New York.

After the Bremen arrived in New York on August 28, greeted by reporters and newsreel cameras along with tugboats and customs officers, Ahrens quickly and ingeniously prepared the ship for what promised to be her roughest journey by purchasing black paper from a theatrical supply company to black out the hundreds of portholes and windows.

At the end of the workday, the customs agents departed, explaining that their report had to be read by the chief of customs in New York before the ship could leave. 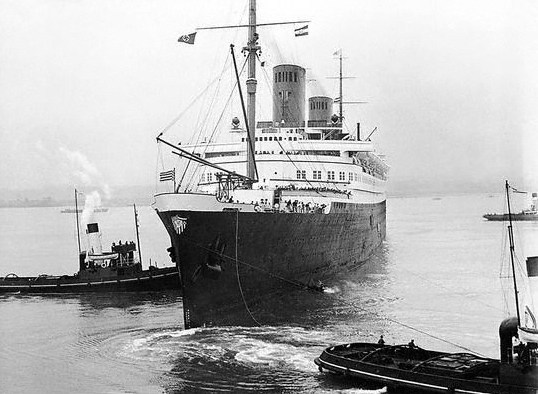 The Bremen’s officers believed that the Roosevelt administration delayed their departure in order to give the Royal Navy time to establish pickets in the Atlantic or in the hope that Ahrens would lose heart and allow his ship to be interned and, perhaps, eventually seized by the U.S. Merchant Marine. 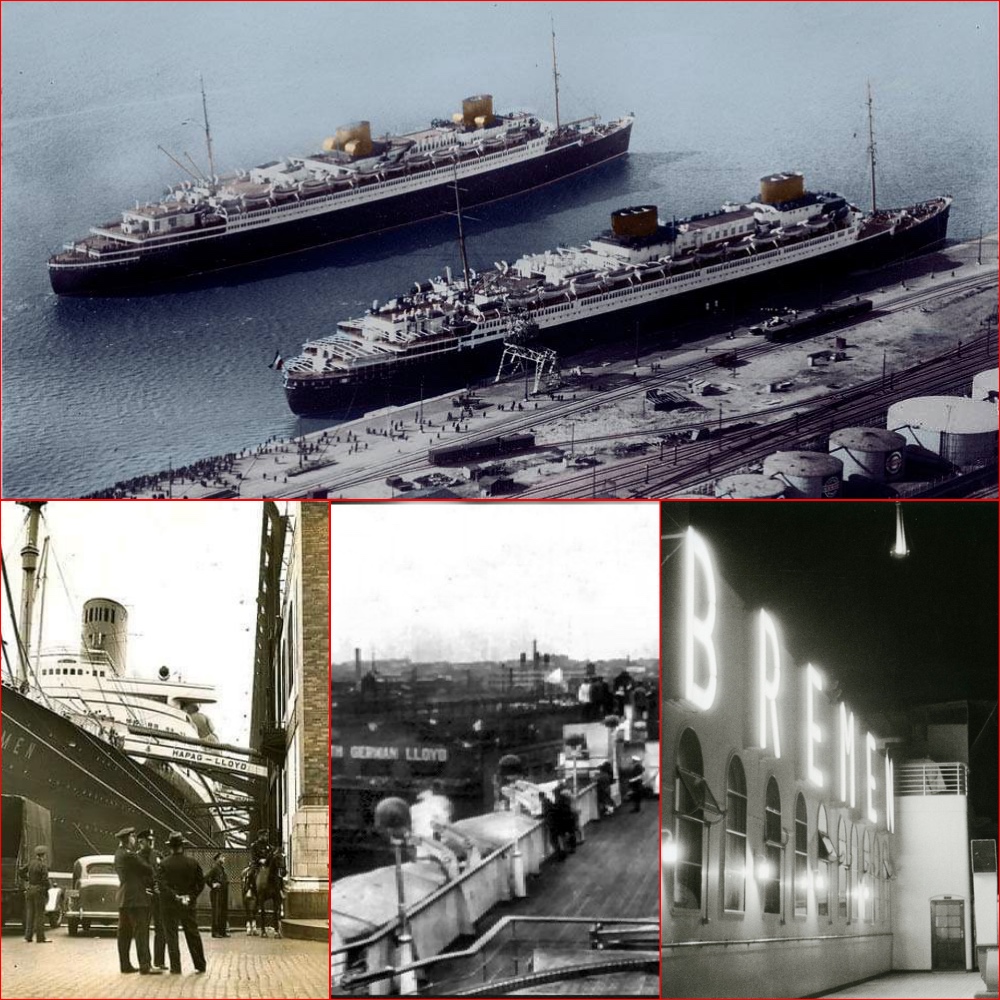 The Crew Prepares For War

Late that afternoon, U.S. authorities, finding nothing, finally authorized the Bremen to depart. At 6:30 pm, she finally set sail. Slowly gliding past lower Manhattan on her way to the Atlantic, the ship’s band struck up “Deutschland Uber Alles” and the Nazi Party anthem, “Horst Wessel Lied.” Many of the crew members had assembled on deck, their arms raised in the Nazi salute. But political zeal and martial fervor did not cancel out the ancient courtesies of the sea.

The ship’s name and home port were also covered in dark paint. Speeding at 27-28 knots, the Bremen continued northeastward through heavy seas and thick fog. Running lights were extinguished, radio silence was maintained, and extra lookouts were posted on deck and on the masts. At the first indication of another ship on the horizon, the Bremen changed course to avoid being spotted. 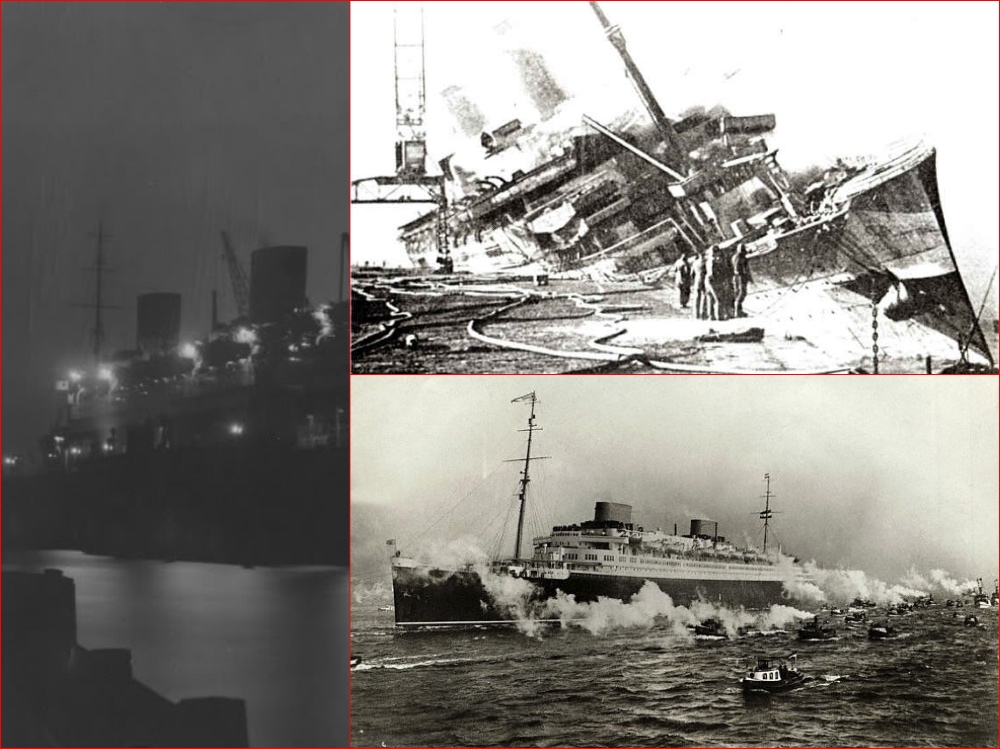 Hunted by the Royal Navy

On September 1, tension thickened when the wireless received word that the German Army had rolled across the Polish border.

By that time the Bremen was being hunted by considerable units of the Royal Navy, anxious to seize or sink the pride of Germany’s merchant fleet. British submarines lurked near the entrances of Germany’s ports.

On September 6, Germany’s ambassador in Moscow, Count Friedrich Werner von der Schulenberg, informed the Kremlin of his government’s intention to divert blockade runners to the ice-free northern Russian port of Murmansk on the eastern shore of the Kola Inlet, 30 miles from the Barents Sea. Soviet authorities were expected to unload German ships and send their cargo by rail to Leningrad, where German freighters waited. The Soviets complied willingly.

On September 6, the Bremen finally dropped anchor, having covered 4,045 nautical miles since leaving New York six days and 13 hours earlier. Lining up on both sides of the deck for a view, the crew saw a port city that was raw, unfinished, and largely unpaved. Among the few modern amenities offered by Murmansk were the Hotel Arctic and a clubhouse for foreign sailors, mainly Swedish, Dutch, and Norwegian merchant seamen.

On September 18, about 850 crew members were sent home to Germany aboard a pair of Russian trains, leaving behind a skeleton detail of 70 officers and men to stand watch and maintain the ship. Winter came early in that part of the world. It was already snowing when the trains pulled out of Murmansk.

Boredom set in during the months when the Bremen waited for the last leg of its journey home.

Murmansk was busy with German shipping during this time. Also in port was the U.S. merchantman City of Flint, which had been seized by the pocket battleship Deutschland in the North Atlantic for carrying contraband bound for Britain. Ironically, Murmansk would become a key destination for Anglo-American convoys supplying the Soviets after Hitler turned on Stalin in 1941. 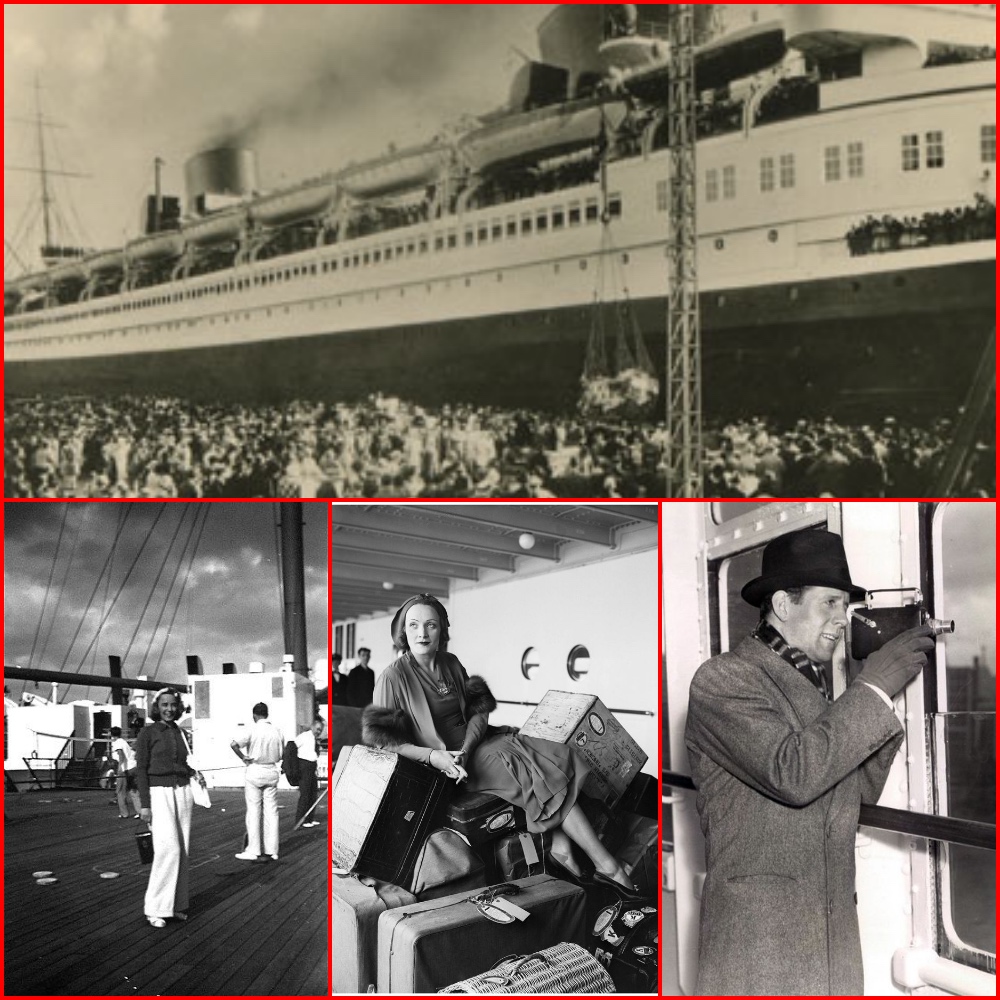 The Salmon’s skipper, Lt. Cmdr. E.O. Bickford, surfaced after identifying the Bremen through his periscope and gave the liner repeated warnings to surrender. Bickford was unable to claim his prize. He was forced to crash-dive when a Dornier Do-18 flying boat, dispatched by the German Navy to escort the Bremen, appeared on the horizon. The Salmon survived to cripple the German cruisers Leipzig and Nuremberg before returning to base. 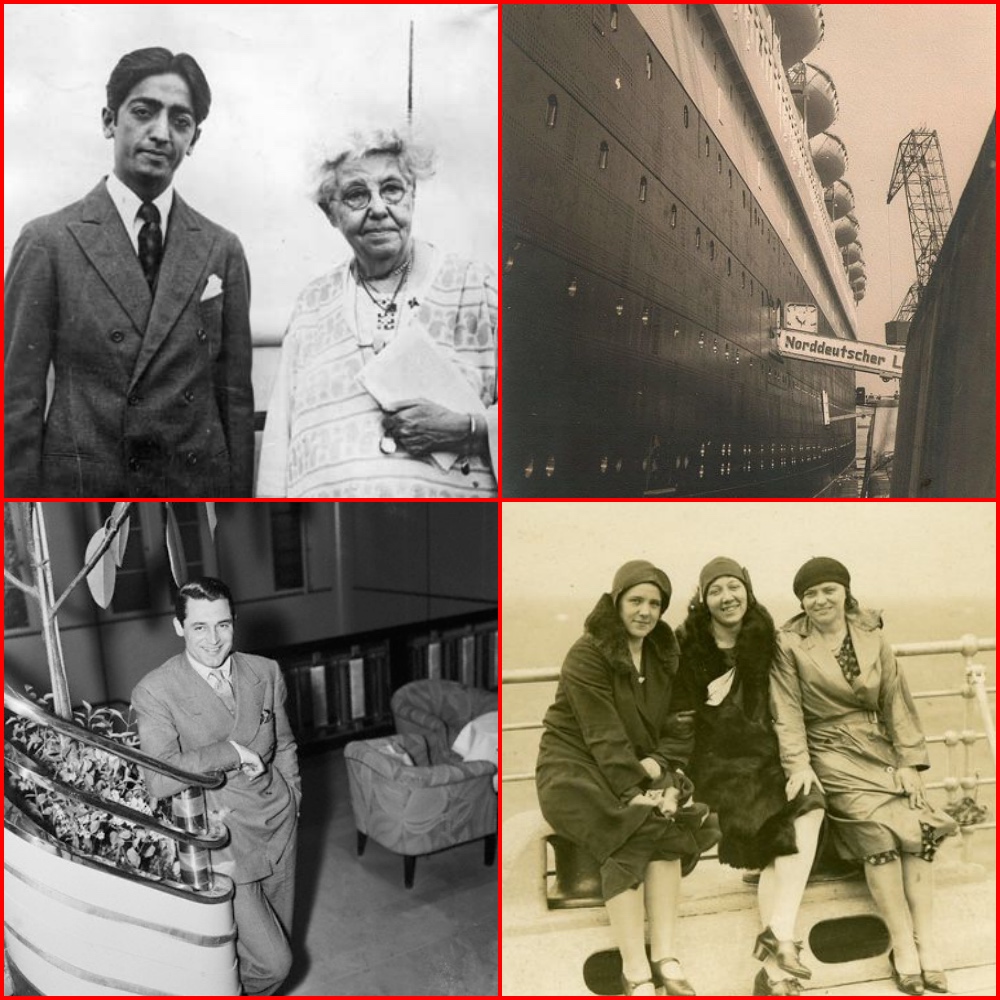 In the following months, the ship was painted in camouflage colors and refitted as troopship No. 802 for Operation Sea Lion, the German invasion of Great Britain that would never be launched. Aware of the Bremen’s new mission, the Royal Air Force attempted but failed to sink her. On March 16, 1941, a fire broke out in her expensively furnished wood-paneled dining room, which had been converted to a mattress storeroom.

It spread over the entire ship, and despite a vigorous response from Bremerhaven’s fire brigades burned out of control.

Badly listing toward the quay, the Bremen was flooded so that she could right herself and sink in the shallow water of the Weser River, making salvage of machinery easier.

The Gestapo initially suspected that British intelligence had a hand in the destruction of the ship, but before long the investigation fell upon a 15-year-old deckhand from the Bremen, Walter Schmidt, who eventually confessed to having set the fire in revenge for a clip on the ear given him by a supervisor. Wartime justice was swift and severe. Schmidt was executed.

The Bremen, which began the war with a storybook adventure, ended it as charred hulk brooding over the ruins of Bremerhaven, a port city regularly visited by the RAF and U.S. Eighth Air Force bombers.

In 1946, the Bremen was towed to a sandbar three miles upriver.

The mammoth ship, resembling by then a beached and decomposing whale, was gradually dismantled and scrapped between 1952 and 1956.