The Mississippi Shipping Company of New Orleans introduced three revolutionary passenger-cargo ships to its South American services in the post-war years of the 1940s. In keeping with the trade name of the company, “Delta Line”, the three vessels were given “Del” names DEL NORTE, DEL SUD and DEL MAR. The three “Dels” unusual design, by the naval architect George G. Sharp of New York, made them unique along the New Orleans waterfront and the east coast of South America, an area where they traded for nearly a quarter of a century.

The liners were originally based on standard C-3 design cargo hulls all that were available for purchase during the late war years. With the cooperation of Admiral Vickery, head of the construction division of the American Maritime Commission, Delta Line arranged that three of these hulls be redesigned as passenger/cargo vessels to re-establish the company’s services to South America. The ships, built at the Ingalls Shipyard, Pascagoula, Mississippi, were fitted with D.R. geared turbines giving a 17-knot service speed. A new innovation for the time was complete air-conditioning throughout the accommodation areas for passengers, officers and crew. Being nearly identical, the sister ships were all 10,074 tons, 495 feet in length and 70 feet in breadth. Their total cost in 1946 was over $7,000,000 each.

A new day’s morning at sea could be started with a stroll along the glass enclosed Promenade deck, a visit to the ship’s library – or breakfast in bed. The latter “institution” was served with a full view of the sea sliding by outside through semi-square “windows” which had replaced the traditional round port hole in many cabins. Mid-morning coffee was served in the main lounge, a room decorated by murals of “old” New Orleans. Glass partitions separated the various public rooms, yet, at the same time, created an open spaciousness associated with much larger ships. Days were lazy and relaxed with games available on the sports deck or a long siesta in one of the comfortable lounge chairs awaiting passengers out of the wind’s way on the aft deck. Evenings had their beginnings in the ship’s dining room, and then were continued in the Grand Lounge while the band played – or on warm, tropical evenings at poolside.

On deck a dominant feature of the new ships was the huge funnel – actually a dummy built of aluminum. Inside this structure were two decks of officer’s quarters, the main radio room and an emergency generator. The actual exhaust gases were discharged through two thin stacks just aft of the dummy funnel, somewhat disguised as kingposts. The vessels were among the first commercial ships of the world to be equipped with post-war radar, highly refined after stringent combat use.

Though routes and ports of call varied somewhat during the careers of the three vessels their area of trade was normally the Caribbean and the east coast of South America. On a southbound voyage San Juan in Puerto Rico was usually the first stop. The ship might then precede top Bridgetown, Curacao of La Guaira before pushing out into the Atlantic for the long run around the eastern bulge of Brazil. After 12 days at sea the vessel would glide by the majestic prominence of “Sugarloaf” and slip into the beautiful bay of Rio de Janeiro.

The first ship completed, the DEL NORTE, departed on her maiden voyage from New Orleans to South America on 26th November 1946. Her sister vessels, DEL SUD and DEL MAR, followed on 28th March 1947 and 13th June 1947 respectively. Once in service the three-passenger/cargo liners maintained a regular schedule of two sailings per month from U.S. Gulf ports to the Caribbean and South America. The “Del” trios quickly established an enviable record for dependable sailings and were soon offering 44-day round-trip cruises to such ports of call as Rio de Janeiro, Santos, Paranagua and Buenos Aires.

Life on board these vessels was a pleasant surprise to passengers who had undertaken pre-war voyages in less refined ships. Most appreciated was the air-conditioning, particularly after reaching some of the South American ports, but also appreciated was the swimming pool situated aft of the main superstructure on each liner. These facilities, together with the open sun deck and nearby bar and cafe, assured a first class holiday for passengers as the ship sped southward to South America aboard the first class ships. 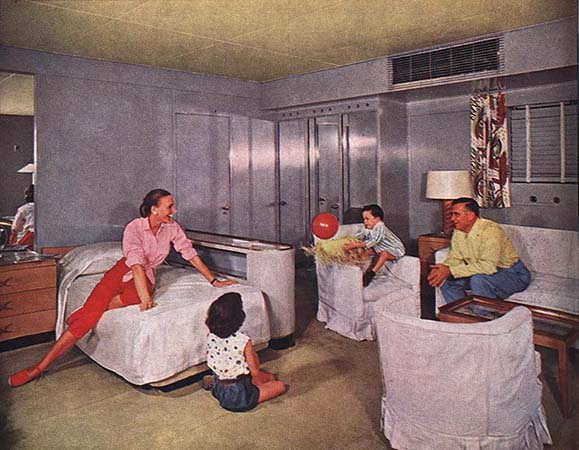 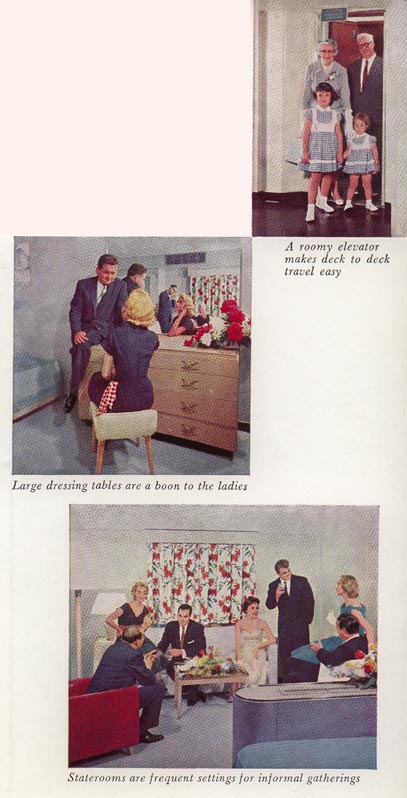 This photo shows the colonial blue of the main lounge of the Del Sud.
The basic colour schemes of the lounges of the other two ships were
rust/brown (Del Norte) and green (Del Mar) (see below). 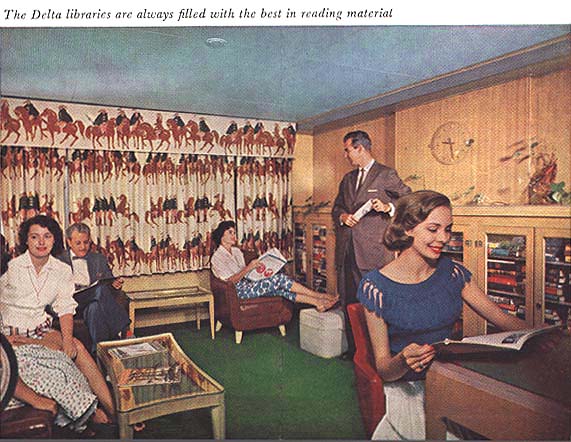 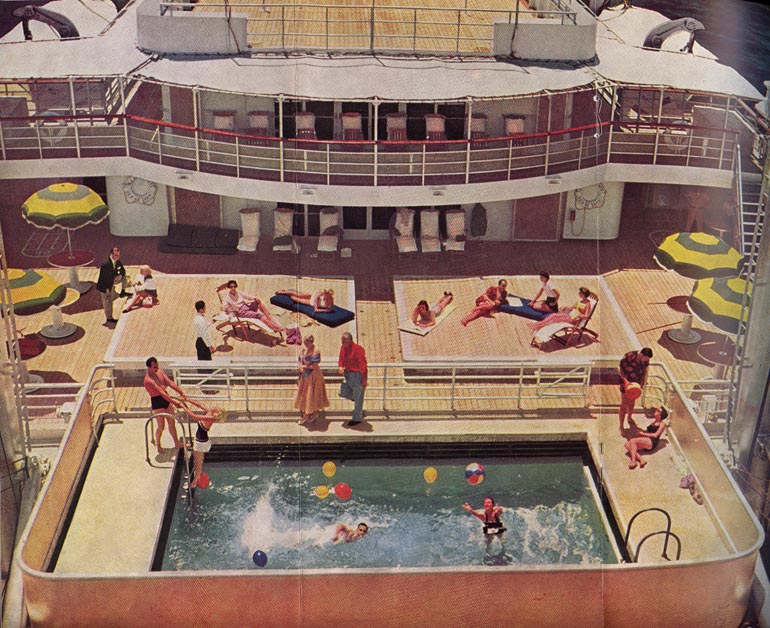 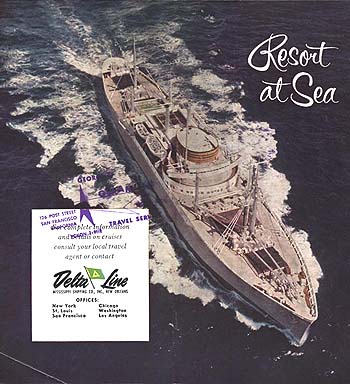