A wonderful Dutch film/video on the great liner.

Throughout the 1930s a remarkable period of growth was experienced by the merchant fleets of many nations. This growth occurred in spite of a depression that put a strangle-hold on the world-wide economy.

Our thanks to Reuben Goossens, 47 years in the Passenger Shipping/Cruise Industry, and one of the great authorities on maritime history.  To see more of these wonderful photos of this great ship click here to visit his wonderful website. 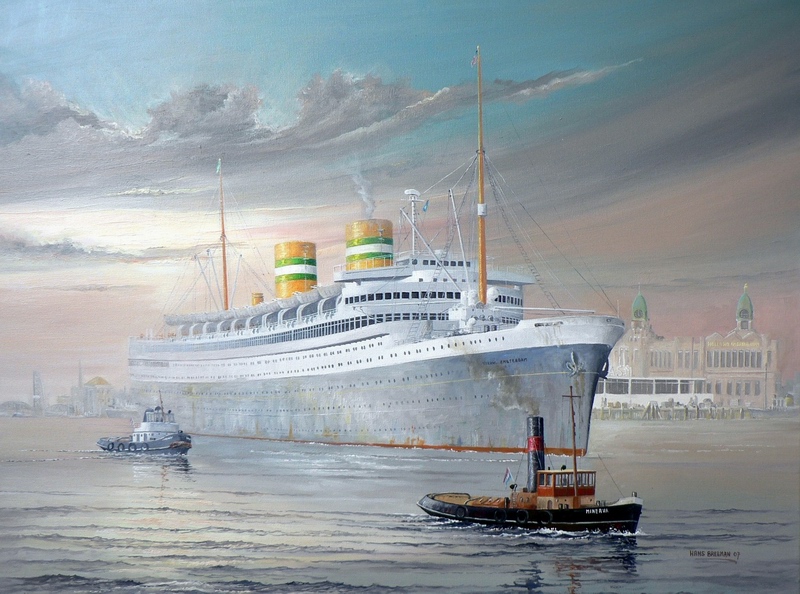 National governments found it prudent to fund the construction of ocean liners such as the great liner Nieuw Amsterdam as a means of easing severe unemployment and providing national icons that would, hopefully, show those at home and abroad that somehow the bleak situation would soon improve. Into these circumstances was born the fabulously sleek Holland-America liner Nieuw Amsterdam. 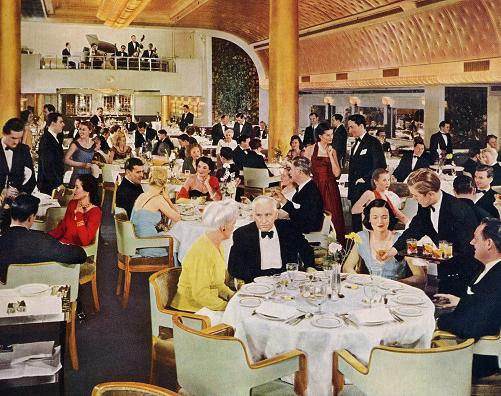 The interior of the SS Nieuw Amsterdam First Class Dining Room, a luxury transatlantic ocean liner of the Dutch fleet, named by Queen Wilhelmina in 1937, and known for its modern decor.

Construction on the new liner was carried out at the Rotterdam Drydock Company. Christened by Queen Wilhelmina in April 1937, Nieuw Amsterdam was, at 36,000 tonnes, the largest liner ever constructed in Holland. Modern in every way, Nieuw Amsterdam followed the Art Deco trend of the day in both interior decorations and exterior design. 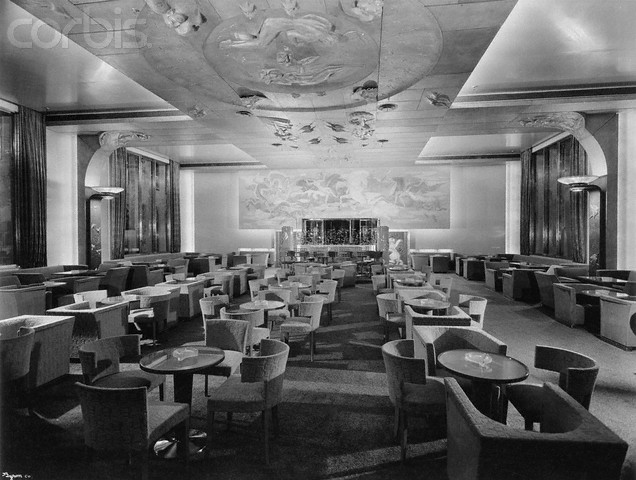 The First Class Lounge.  Chic, for meeting friends and, unlike today’s cruise ships, socializing.  Sophistication in a setting long one.

The interiors were distinguished by fluorescent lighting, aluminum motifs, and gentle pastels throughout the ship that created an understated elegance that would make the liner a favorite among seasoned transatlantic passengers. The sleek new liner’s maiden voyage was set for 10 May 1938, and upon her arrival in New York she immediately won adulation and acclaim.

6/5/1948-New York, NY: Star of stage and screen Katharine Hepburn, becomingly clad in slacks, unbent and gave an interview to the boys of the press as she sailed from New York, June 5th, on the S.S. Nieuw Amsterdam.

Nieuw Amsterdam was considered by many to be one of the most beautiful liners constructed in the 1930’s. Although she was neither as large or fast as many of her contemporaries, she was to be a popular liner for the Dutch and was showered with superlatives. 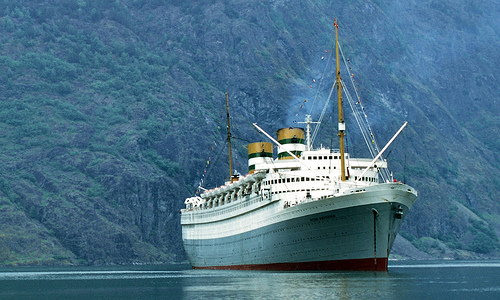 Some feel the Nieuw Amsterdam surpassed the Queen Mary and Queen Elizabeth and was equaled only by the Bremen and the Normandie.

Her sleek outline and two slim funnels provided a striking profile and she soon and garnered a loyal following amid stiff competition from great liners such as Britain’s Queen Mary and the superb Normandie of the French Line. 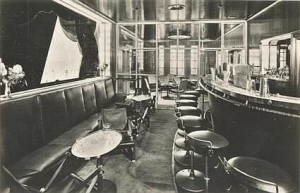 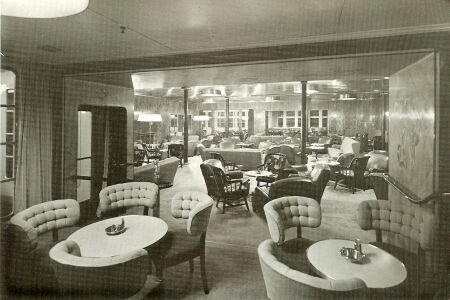 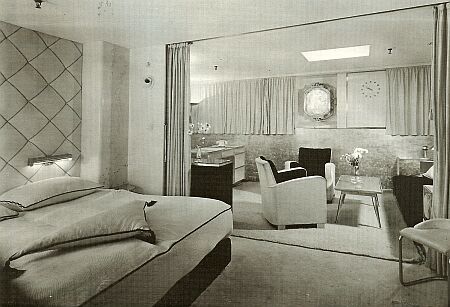 The great interiors of the fabulous Nieuw Amsterdam.

Despite the fierce competition, Nieuw Amsterdam proved to be one of the few money-making vessels of the day. 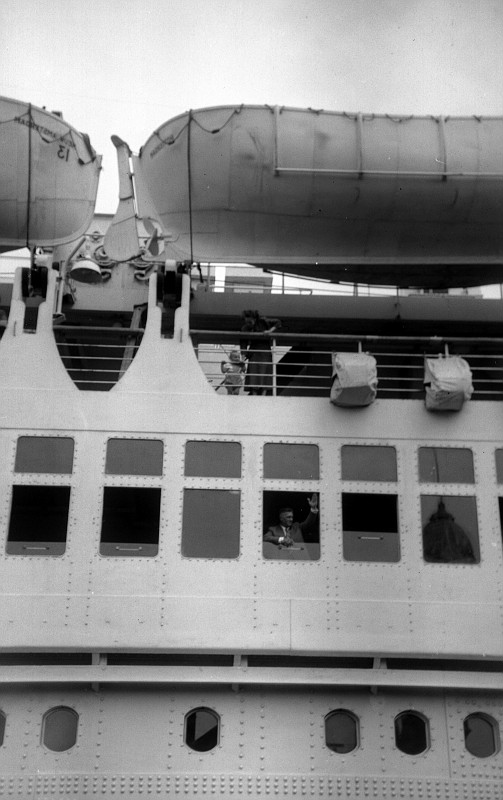 Departure of the SS Nieuw Amsterdam from New York. Look at the reflection in the window of one of the towers of the building of the Holland America Line (HAL) (now Hotel New York)in Rotterdam

Holland’s “ship of peace” was not to enjoy the praise lavished on her for long. After only seventeen voyages, Nieuw Amsterdam was laid up at Hoboken, New Jersey in 1939 after the German invasion of Poland. She would be idle for only a year, however, and was requisitioned by the British Ministry of Transport after Holland fell to Hitler’s armies. She would spend the remainder of the war years as a troop transport, despite the fact she had been constructed without the consideration of ever being used in a military capacity. During the course of the conflict she would transport over 350,000 troops and steam some 530,452 miles before being decommissioned in 1946. Fourteen months were required to restore Nieuw Amsterdam to her to pre-war condition, and in October 1947 she resumed her transatlantic schedule. 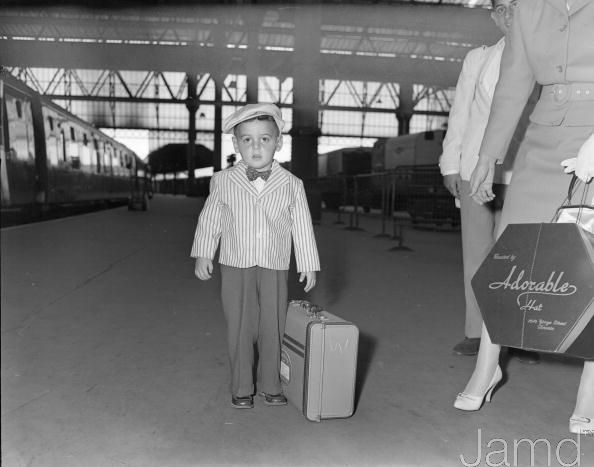 3rd July 1959: Three year old Mark Sheffer of Toronto with his luggage as he leaves the boat train at Waterloo, London. He traveled to England on the Holland America Line Flagship, SS Nieuw Amsterdam.

For the next twenty years Nieuw Amsterdam would enjoy a loyal following and financial success. Even when joined by a more contemporary fleet-mate in 1959—the Rotterdam—Nieuw Amsterdam still commanded a loyal following. Her several refits in the 1950s ensured she remained in top conditin and continued service despite her being near thirty years of age. In the 1960s severe mechanical problems seemed to indicate an end to the venerable liner’s career, however new boilers were installed and her career continued.

Youtube video of the great “glamor girls” — SS Nieuw Amsterdam and SS United States during the last of their voyages “across the pond”!

In the same decade jet travel had made continued Atlantic passenger runs impractical, so Nieuw Amsterdam was shifted to cruising in the Caribbean. Soon escalating operating cost and competition from newer cruise vessels meant an end to the grand liner’s service career. Nieuw Amsterdam had been an enduring icon on the North Atlantic for the better part of three decades—certainly her refined interiors and impeccable service added much to her appeal. When she sailed to the breakers in 1974, the world saw the end to one of the greatest liners to sail the Atlantic. The links below provide a glimpse into the fabulous interiors that made Nieuw Amsterdam a favorite among seasoned transatlantic travelers.