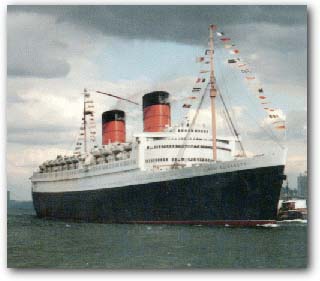 On Jan. 9, 1972, the British ocean liner burst into flames and sank in Victoria Harbor. Although the fires were determined to be the work of arsonists, no one has ever been charged with the crime.

The Case for Sabotage and Arson.

For more than 50 years, the 83,000-ton RMS Queen Elizabeth was the largest passenger ship in the world.

Launched on Sept. 27, 1938, as a sister vessel to the Cunard Line’s Queen Mary, the Queen Elizabeth is emblematic of a period during which shipping companies vied to build ever bigger and faster trans-Atlantic liners.

The beginning of World War II prompted the British military to outfit both the Mary and the Elizabeth as troop carriers, a function both ships filled for the duration of the war. 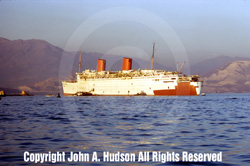 On Oct. 16, 1946, the Queen Elizabeth finally made its maiden passenger voyage from Southampton, England to New York. From then through the 1950s, transatlantic liners enjoyed their golden years.

The development of the air travel industry soon prompted a decline in travel by sea, though. By 1961, millions were flying across the Atlantic and fewer than a million were crossing by ship.

The Queen Elizabeth was subsequently retired in 1968, and three years later was sold to the Chinese shipping tycoon C.Y. Tung. Tung then brought the ship to Hong Kong to be converted to a floating school called “Seawise University.” 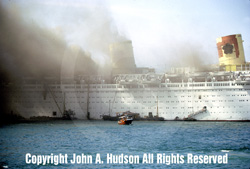 After a mysterious series of fires broke out aboard the ship in 1972, the Queen Elizabeth capsized and sank.

As an entry on the official Cunard site states, “An inquiry in July 1972 confirmed that it had been the work of an arsonist but the culprit was never found. In Dec. 1973, it was decided to scrap the hulk. The ship’s final protest came Nov. 5, 1975 when it rolled over and disgorged several tons of oil that polluted the surrounding waters and beaches.’’ 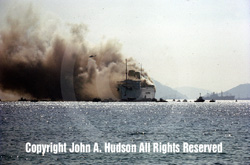 There are two factors that lend credence to speculations of sabotage and arson. The first is that the fire broke out simultaneously in at least three different sections of the ship. The second is that Tung, the ship’s owner, was “an ardent Nationalist, while many workers on the ship [were] from Communist-dominated shipbuilders’ unions.”

Some 37 years after the demise of the Queen Elizabeth, the mystery of how the ship met its end was, and still is, a matter of conjecture. After an initial court of inquiry, the matter was handed over to the criminal investigation department of the Hong Kong police. Even in 2003, people were still waiting to hear what the police had discovered.

An eyewitness account and the Queen’s final resting place. 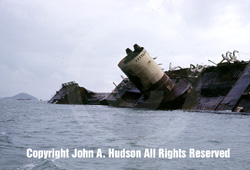 A chartered accountant from England named John A. Hudson witnessed the fire aboard the Queen Elizabeth in 1972, and has since devoted a Web site to what he witnessed. “It was clearly evident that whatever was burning on board was more than a grease fire stemming from a worker accident.

What had started as puffs of smoke from portholes turned into a raging inferno in the upper superstructure generating huge volumes of smoke. This, over only a three hour period,” Hudson writes.

GreatOceanLiners.net offers a complete history of the Queen Elizabeth, ranging from its construction and launch, to its important function in the war effort. The Web site even records the ship’s role in the 1974 James Bond movie “The Man With the Golden Gun,” during which it served as MI6’s Hong Kong headquarters.