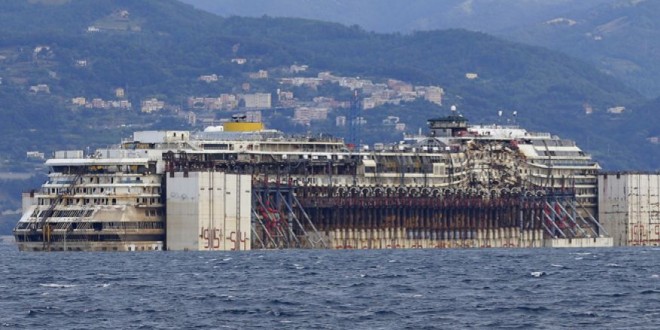 The shipwrecked Costa Concordia cruise liner completed its final journey, reaching Genoa on Sunday where it will be scrapped. The ship before the negligent disaster by Costa Lines and Carnival Cruises. The nightmare cruise. If this happened in an open sea – thousands more than the TITANIC would die. Cruise-ships can be very dangerous. Especially when off-shore greedy corporations have paid off politicians in Washington DC.

Pulled by tugboats and nudged by winds, the ship was eased into the port in this northwestern Italian city. The Concordia struck a reef when its captain sailed too close to Giglio Island off Tuscany’s coast Jan. 13, 2012, and capsized, killing 32 people.

A spectacular operation set the ship upright in September 2013. On Wednesday, tugboats towing the wreck began the slow, five-day journey to Genoa, headquarters of ship owner Costa Crociere Spa and the port where the luxury vessel first set sail, after construction in 2005.

“Our big ally has been the ship,” said Franco Gabrielli, the Italian government official overseeing the operation. “The vessel has shown an impressive robustness.”

Capt. Gianluca D’Agostino, Giglio’s coast guard commander, told Sky TG24 TV the 180-nautical-mile voyage from Giglio to Genoa went so smoothly that one night, crews in a control room attached to the Concordia lit up the lights along the uncrushed side as if it were making one last Mediterranean cruise.

Environmentalists had worried the Concordia might pollute the marine sanctuary along its route, which passed close to the specially protected tiny isle of Montecristo. Fuel was siphoned out early in the salvage operation, but chemicals, food and human waste were also trapped inside and there were fears that it all could leak out.
D’Agostino said monitoring by spotter planes and samples of seawater found no pollution. When the Concordia was being towed near the French island of Corsica, D’Agostino recalled, he gave a bottle of Giglio wine to French authorities doing their own monitoring at sea, and the French, who were pleased no pollution was found, gave his crew a case of Champagne.

Demolition and scrapping will take an estimated two years.

But first, the wreck will be searched for any remains of an Indian waiter, the only body never found despite repeated missions by divers who swam through the ship when it lay on its side outside the port of Giglio, a fishing and tourism island in pristine waters, which are home to dolphins. One diver perished during search efforts.

Ship captain Francesco Schettino is being tried for alleged manslaughter, causing the shipwreck and abandoning ship with many passengers and crew still aboard. Dozens of people dove into frigid waters and after the Concordia started listing, lifeboats could no longer be launched during the chaotic and delayed evacuation.