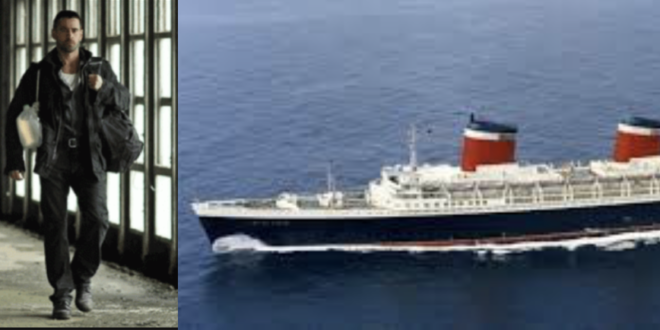 The SS United States is sending out what may be its final distress call.  Colin Farrell is seen aboard the famous ship.

Left) Colin Farrell heads down rusting First Class promenade of the SS UNITED STATES; (Right) The First Class promenade deck during the heyday of trans-Atlantic travel aboard the SS UNITED STATES… when deluxe passengers enjoyed early morning bullion and afternoon tea while watching the Atlantic on their way to and from Europe in only four days at sea.

The 990-foot-long SS UNITED STATES could be sold for scrap within two months unless the grass-roots preservation group that’s working to secure a home and purpose for it can raise $500,000 immediately, the group told  The Associated Press.

Talks are under way with developers and investors about the ship’s long-term future, but without the emergency funding, its caretakers fear they will run out of money before a deal is inked. Here are great photos when stars and celebrities sailed aboard the fastest ocean liner in the world. The historic ocean liner carried princes and presidents across the Atlantic in the 1950s and 1960s but has spent decades awaiting a savior at its berth on the Philadelphia waterfront. On April 23, 2012, in Philadelphia, principal photography began aboard the SS United States for “Dead Man Down,” a major motion picture from IM Global. The film stars Colin Farrell, Noomi Rapace, Terrence Howard, and Dominic Cooper. The Philadelphia shoot will continue into June. The director of the film is Niels Arden Oplev, who directed the original 2009 Swedish language version of “The Girl with the Dragon Tatoo,” which starred Ms. Rapace as Lisbeth Salander. Niels Sejer is Production Designer for the film.