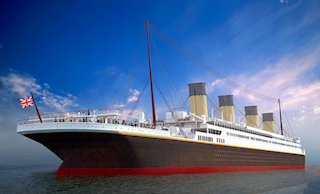 Titanic being built at China’s shipyard. The RMS Titanic sank in the North Atlantic Ocean on April 15, 1912, after colliding with an iceberg during her maiden voyage from Southampton to New York.