Up until the 1960s, many celebrities, executives, tourists, etc., still sailed by passenger ship.  Here are publicity photos of arrivals and departures. 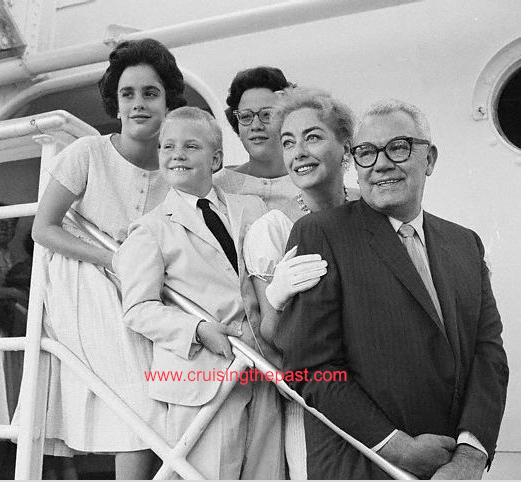 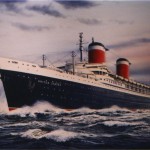 Returning From Business And Pleasure Trip. Businessman Alfred Steele and his actress wife, Joan Crawford, pose with their children after their arrival here Aug. 6 aboard the liner United States. The children are twins Cathy (Left) and Cindy, 11, and Sonny, 8. The Steeles have just returned from a combined business and vacation trip in Europe. 1960s. 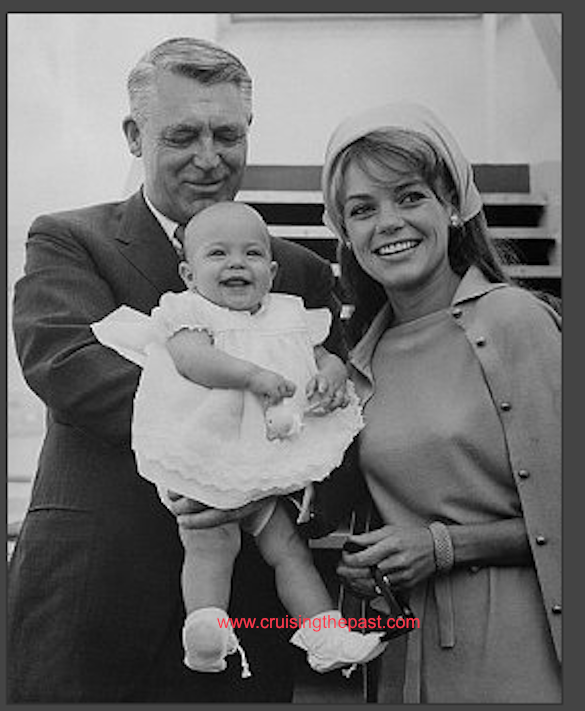 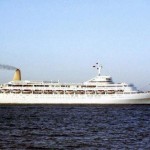 Cary Grant with Dyan Cannon and Their Daughter Jennifer arrive on the RMS Canberra.

British-born Hollywood actor Cary Grant, his actress-wife, Dyan Cannon, and their seven-month old baby daughter, Jennifer, are shown aboard the P & O Orient Lines’ S.S. Canberra at Southampton dock prior to sailing home to Los Angeles. The Grants have been in Britain fro several weeks on a private visit. September 17, 1966 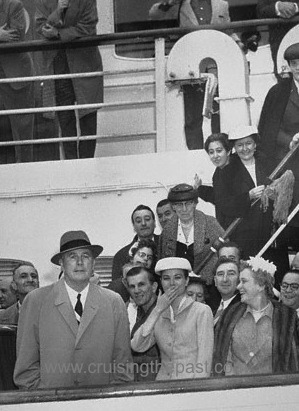 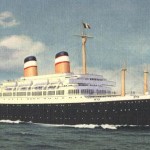 Grace Adieu. New York, New York: Actress Grace Kelly blows a farewell kiss to New York , April 4, aboard the liner SS Constitution before sailing for Monaco. At the ship’s rail with her are her parents, Mr. and Mrs. John B. Kelly of Philadelphia. The actress will wed Prince Rainier III of Monaco on April 18-19. April 4, 1956. 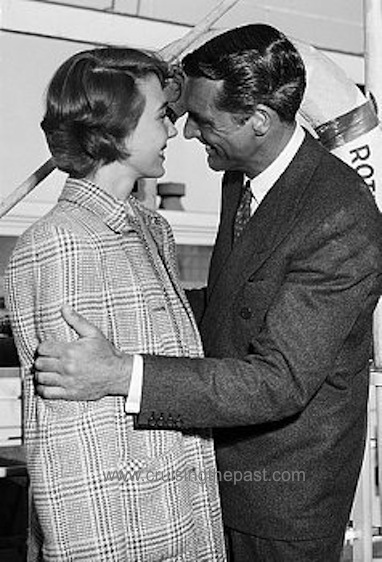 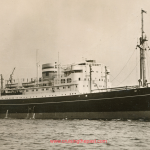 Cary Grant, who was forced to halt work on a movie in England when he contracted yellow jaundice, is greeted by actress Betsy Drake on his arrival here aboard the SS Dalerdijk. In answer to rumors that he would marry Miss Drake, the actor said “I’ve asked her, but she hasn’t said yes yet.” April 09, 1949.  He sailed aboard the Holland America cargo-passenger ship from Europe, through the Panama Canal, to Los Angeles. 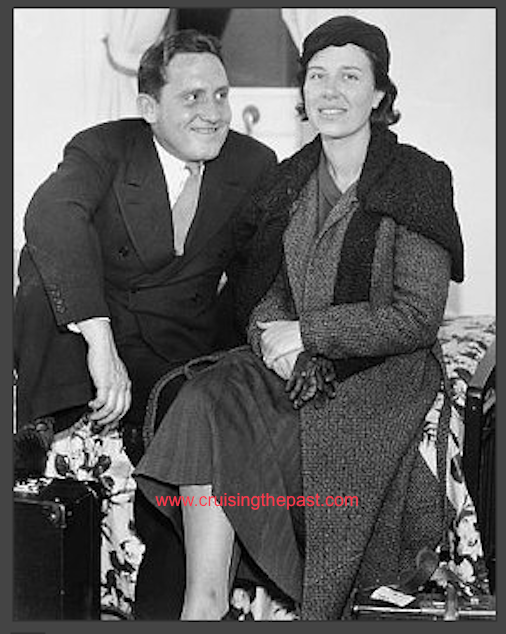 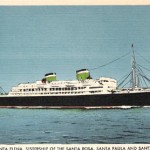 Original caption: Spencer Tracy and wife aboard the S.S. Santa Rosa sailing from Los Angeles Harbor for a vacation in South America. January 02, 1933.  The Grace Lines ships, sailing from Los Angeles, to South America and the East Coast where very popular with film stars as a way to get away.   Tracy, like Katherine Hapburn, sailed a good deal by ships.  It provided a relaxing way to go to Europe – for a film – with a long break at sea. 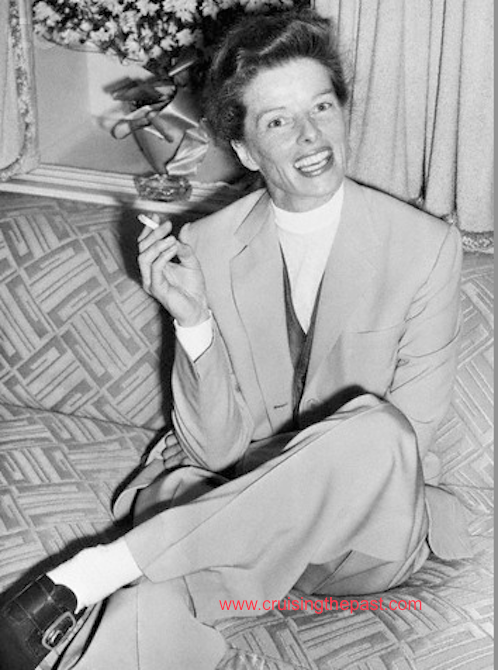 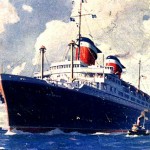 
Southampton, England: Upon arriving aboard the SS America in Southampton, screen actress Katharine Hepburn enjoys a cigarette during a press conference.

She is scheduled to make her first appearance on the Londodn stage in Bernard Shaw’s “The Millionairess.” 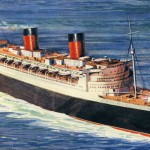 
Spencer Tracy Back From Europe. Actor Spencer Tracy smiles in his stateroom after his arrival here, June 20th, aboard the liner Queen Elizabeth. Tracy, who went to Germany to film scenes for the movie Judgment at Nuremberg, occupied a stateroom next door to actress Katharine Hepburn. When told of this, he expressed surprise and said “if she’s on the ship I wouldn’t know it.” The ship’s personnel said actress Katharine Hepburn stayed in her cabin throughout the five-day crossing.   1961. 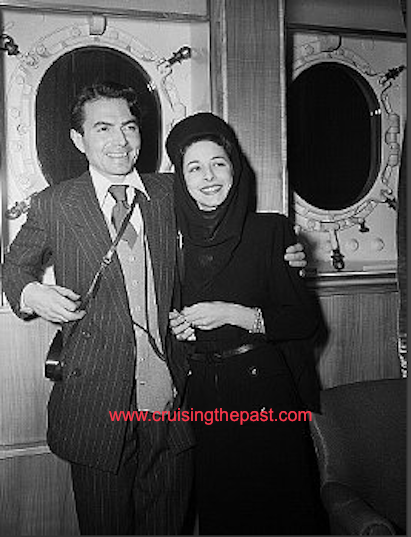 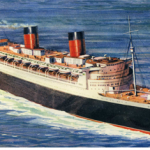 James Mason, British film star, and his wife, pictured in state room of the S.S. Queen Elizabeth following arrival of the liner in New York. Mason, idol of British film goers, is on his way to Hollywod where he will fulfill American screen commitments.

They crossed in the dead of winter – November, 1946 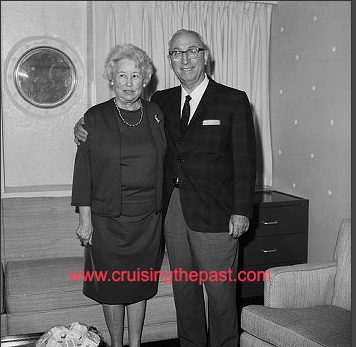 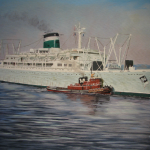 Mr and Mrs. Roy O. Disney of North Hollywood, Calif. are pictured in their suite aboard the Grace Lines S.S. Santa Paula, just before sailing at noon today for a thirteen day cruise to South America and the West Indies. Mr. Disney is president of Walt Diwsney Studios in Hollywood, Calif. and the brother of Mr. Walt Disney. August 28, 1966 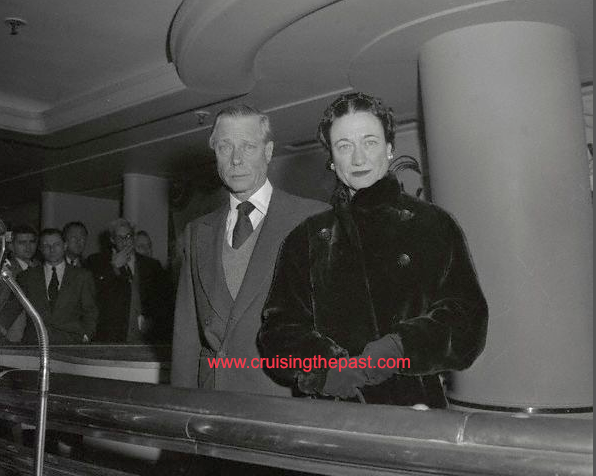 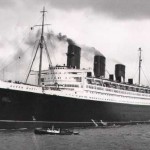 Duke and Duchess of Windsor

Original caption: His handsome face deeply etched with furrows of grief, the Duke of Windsor is shown as he sailed for England on the RMS Queen Mary last night to attend the final rites for his brother, King George VI. The Duchess, for whom the Duke gave up a throne, bade him farewell on the liner. She has never been accepted by the royal family. February 08, 1952 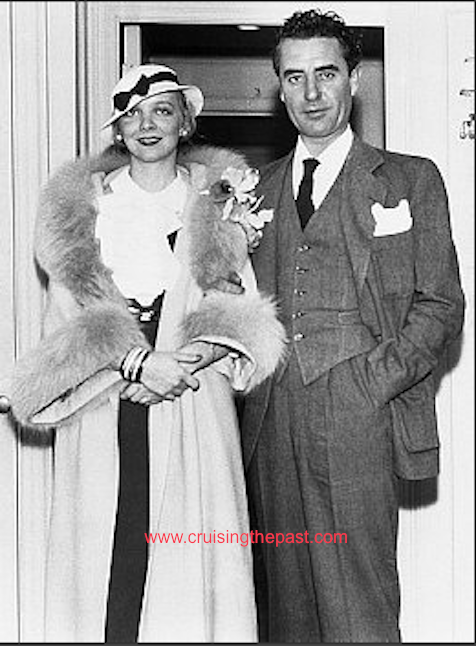 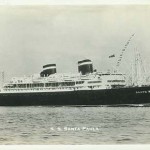