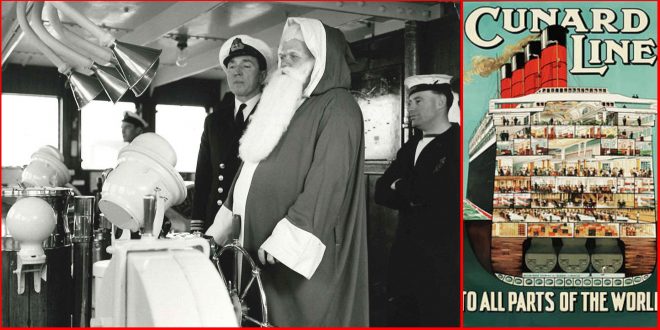 Celebrating Christmas Onboard the Cunard Line

Video History of the Cunard Line It was the particular desire to attract these wealthy passengers that drove ship-owners to build ever larger and more luxurious ocean liners, and the record-breaking Cunarders certainly excelled in scale and luxury. Cunard ships were the first to boast electricity onboard, gymnasia and health centers, children’s playrooms, libraries, wireless communication, bridal suites, ice boxes, en-suite accommodation and lounges for women. The company’s fortunes were deeply affected by the Crimean War and by the two World Wars when many of its ships were requisitioned and a number lost. Two of the most famous tragedies in the company’s history were the loss of the Lusitania in 1915 and the Lancastria in 1940. After the Second World War, the age of transatlantic travel by sea came to an end with the rise of commercial passenger transport by air. Cunard adapted to the new era by building smaller ships, designed for the holiday cruise market and able to sail through the Suez and Panama canals. Today this company, over 160 years old, no longer is a British company and has operated of a suburb in Los Angeles.  The British flag for Cunard no longer exits and their ships now fly flags of convenience.  The ships have a few British personnel but the majority of the staff is international.  The legendary vessels as the Mauretania, Aquitania, Berengaria, and the original Queen Elizabeth and Queen Mary of the 1930s are gone along with that famed service.  Cunard is now just another part of the Carnival Corporation and their ships reflect “Vegas” style mass travel. The petulance of elderly passenger on discovering only one magnum of champagne in his stocking’, Cunard Christmas Annual 1928 ©National Maritime Museum, Greenwich, London “When are you going to start singing?” Cunard Christmas Annual 1928 For more information CLICK HERE to visit the ROYAL NATIONAL MARITIME MUSEUM website.
2019-12-22
Michael L. Grace