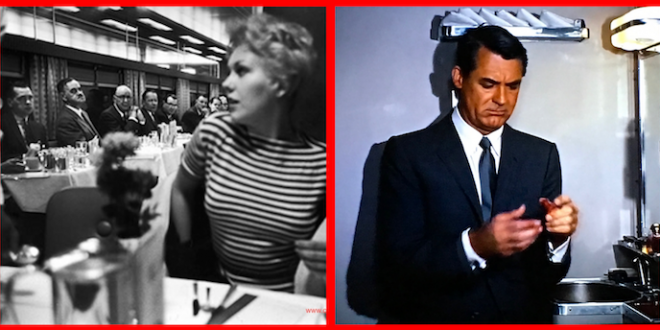 The 20th Century Limited was an express passenger train operated by the New York Central Railroad (NYC) from 1902 to 1967, during which time it would become known as a “National Institution” and advertised as “The Most Famous Train in the World.”

Movie stars were regular passengers on the 20th Century. Kim Novak drew enormous attention from rows of businessmen in the dining car. 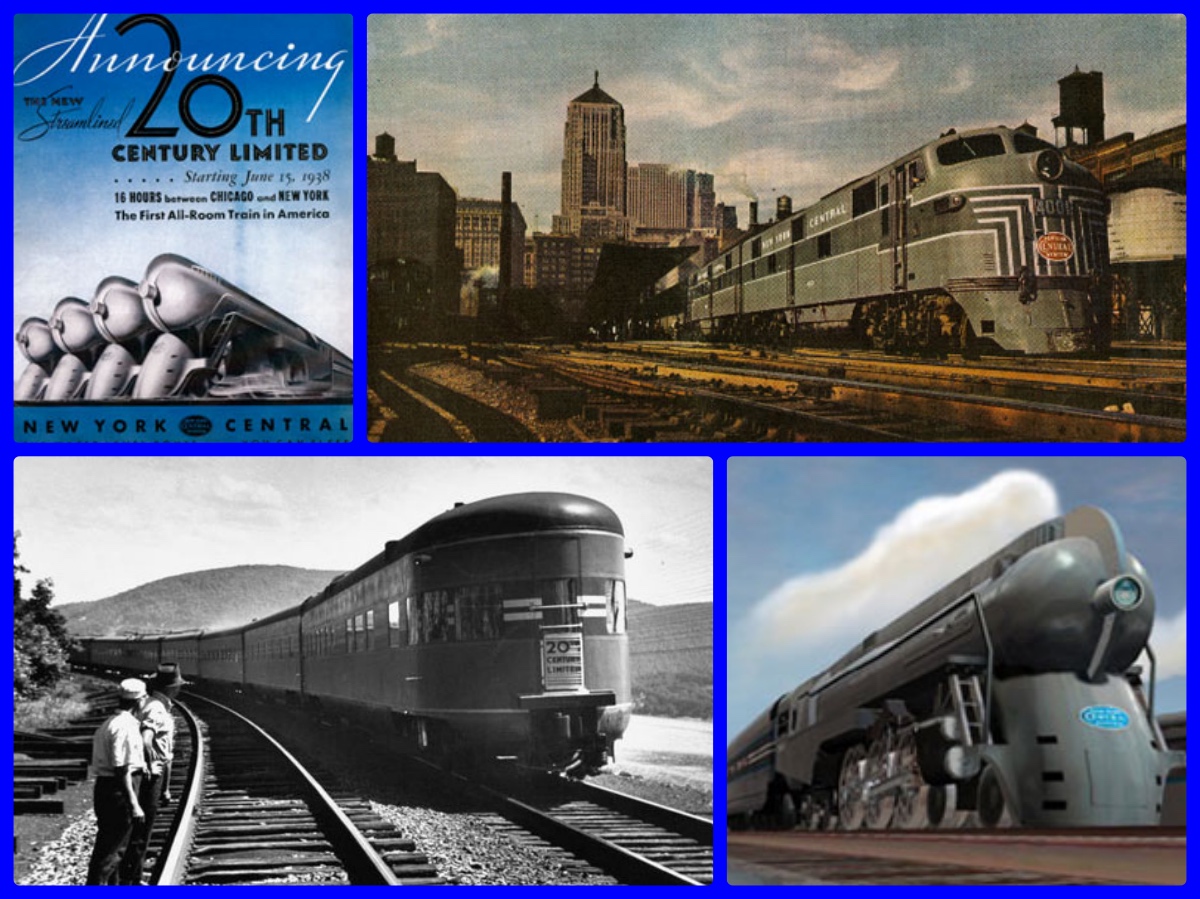 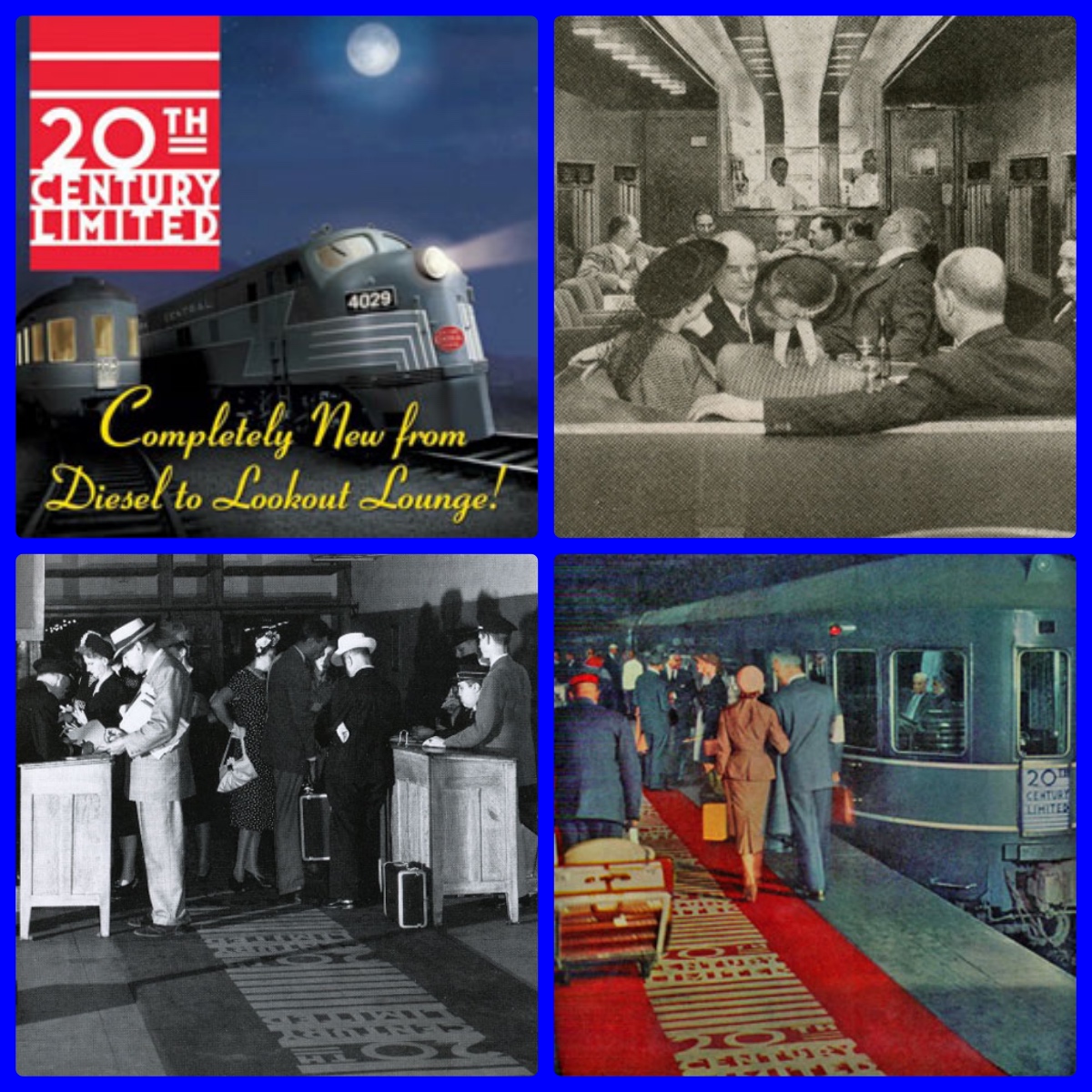 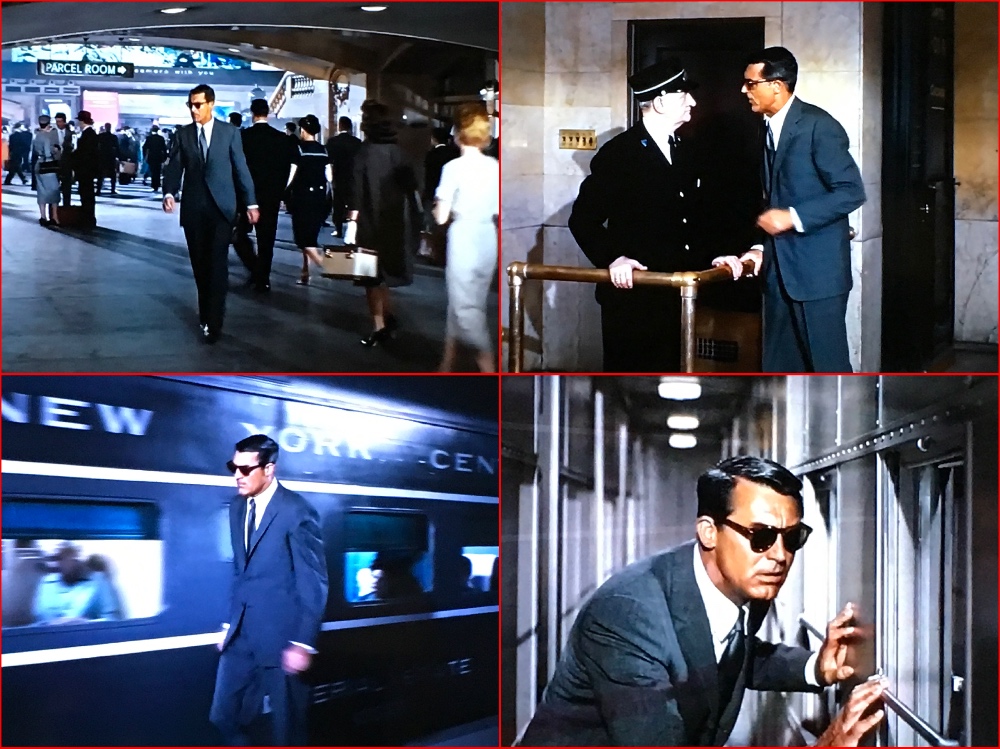 Cary Grant in North By Northwest: in the concourse; at the entrance gate; looking for the police from the Pullman car corridor; walking down the red carpet past a New York Central sleeping car at Grand Central Terminal. 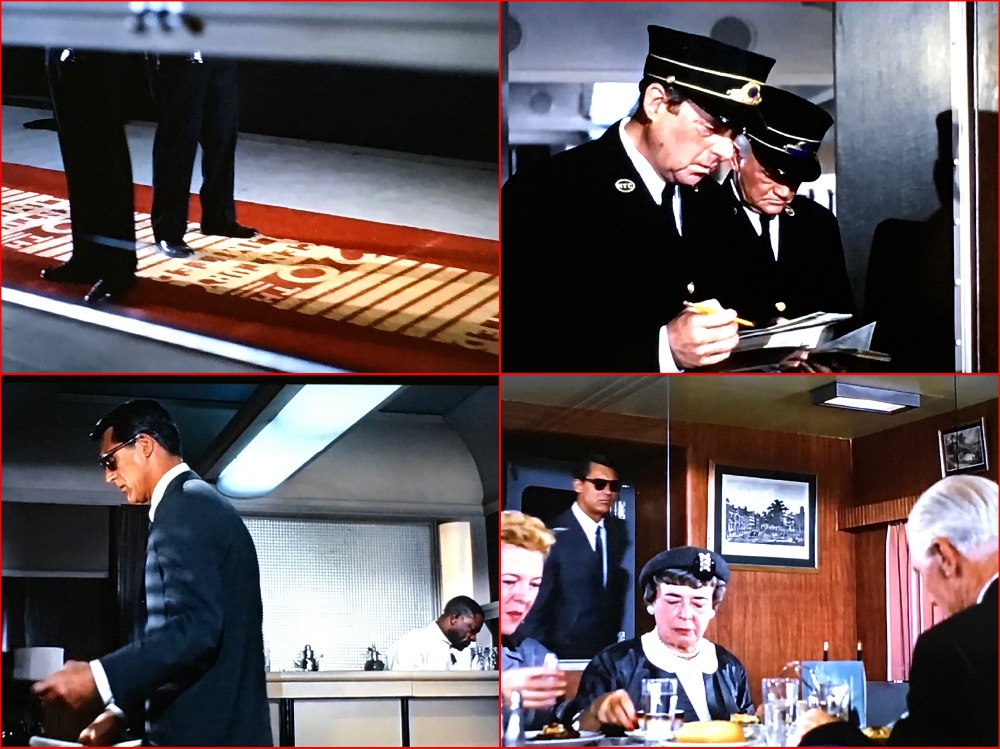 Police on the red carpet; the New York Central Conductor and the Pullman Conductor; Cary Grant entering the dining car; Cary Grant in the club car. 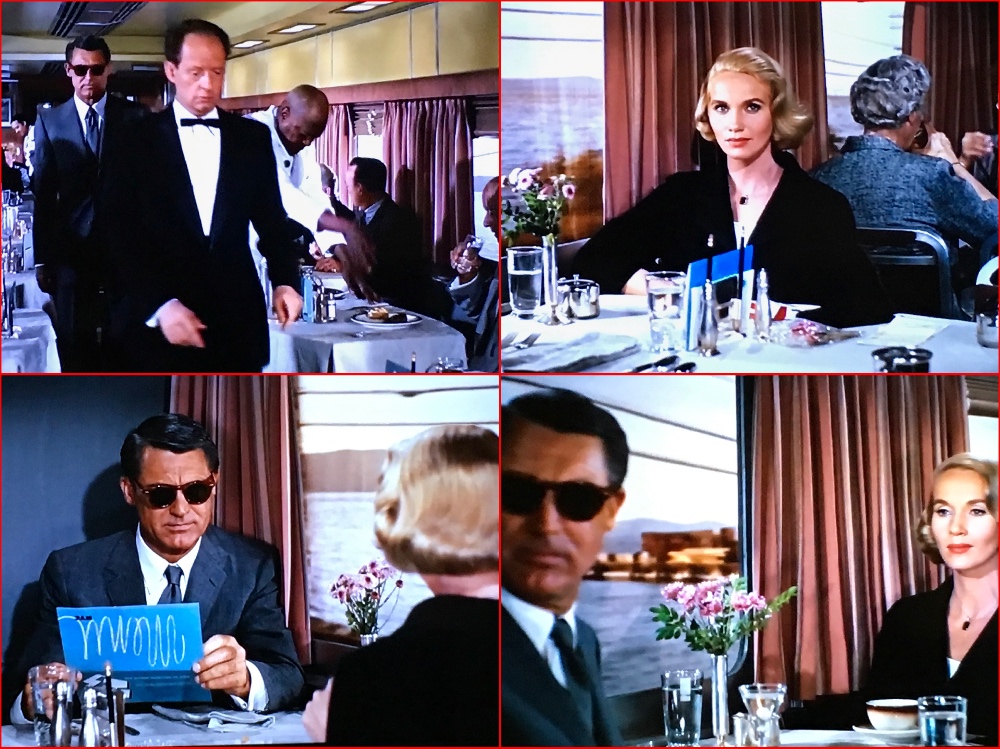 Cary Grant and Eva Marie Saint in the dining car. North By Northwest. 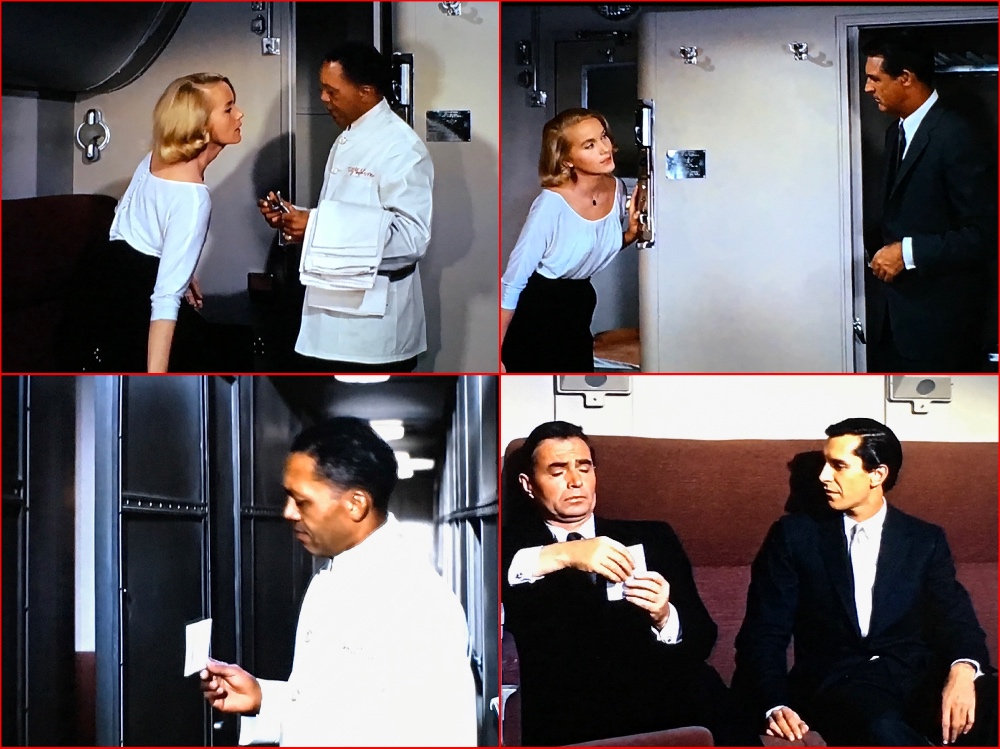 I was also able to visit the set for James Mason’s house atop Mount Rushmore. It was pure 1950s modernism and spectacular on the MGM soundstage.

The famous 20th Century red carpet is featured in the film. Have you wondered where the much-overused phrase “the red carpet treatment” originated? It all started with the 20th Century Limited. 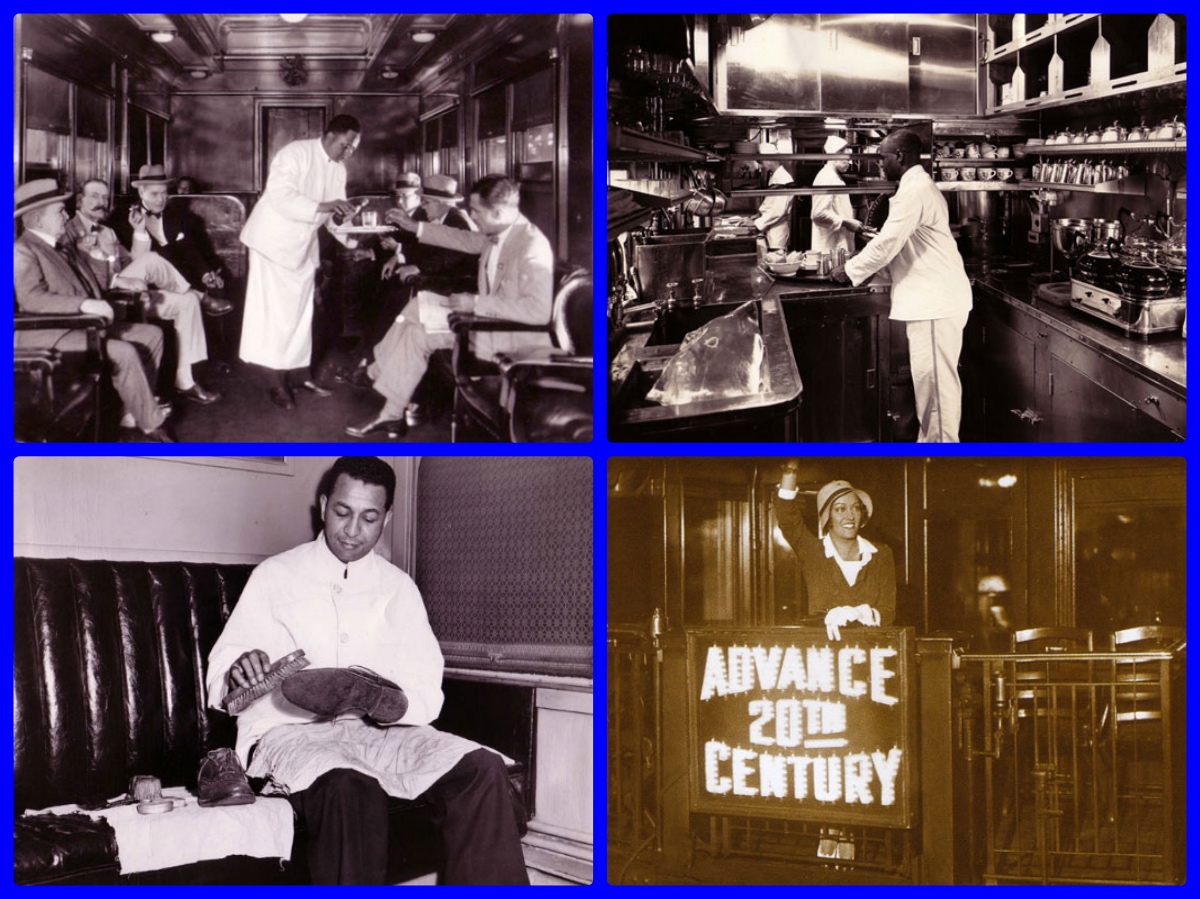 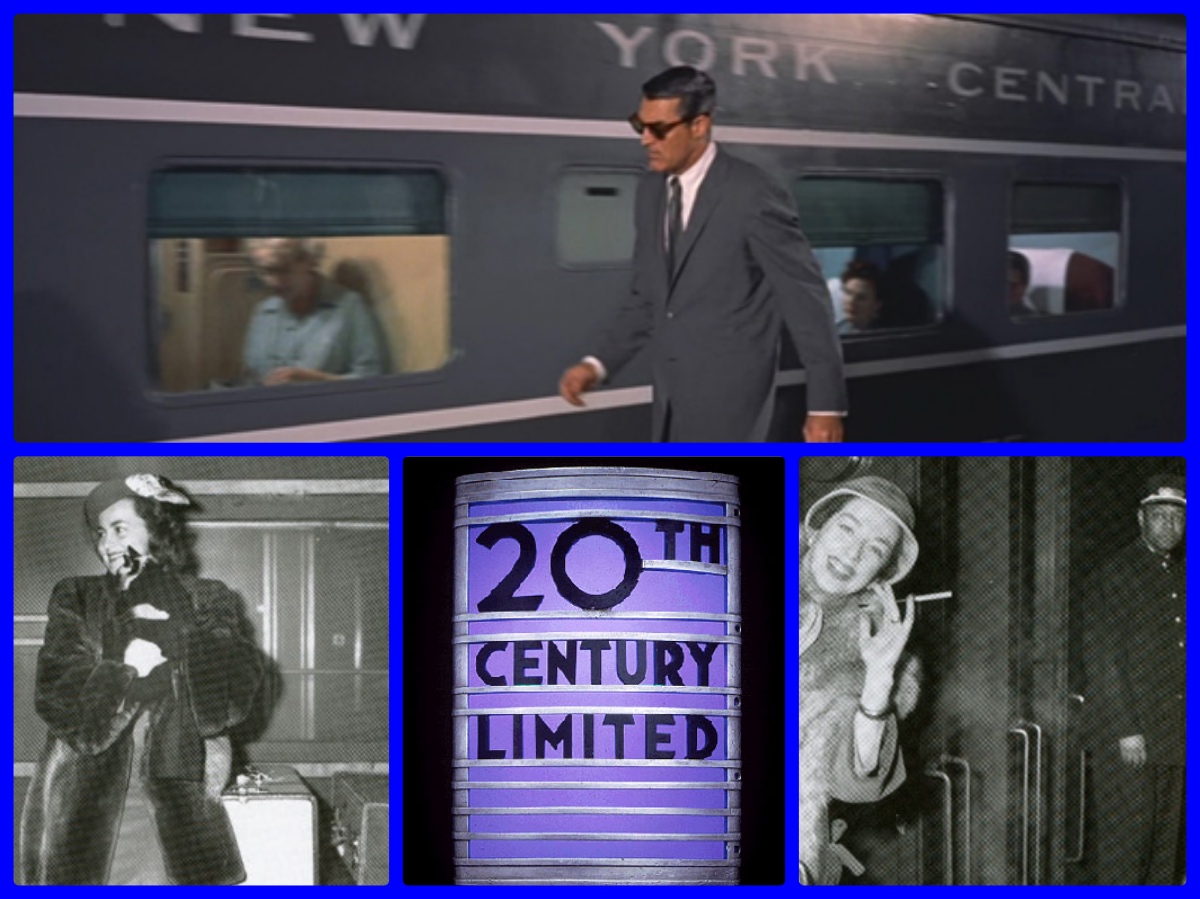 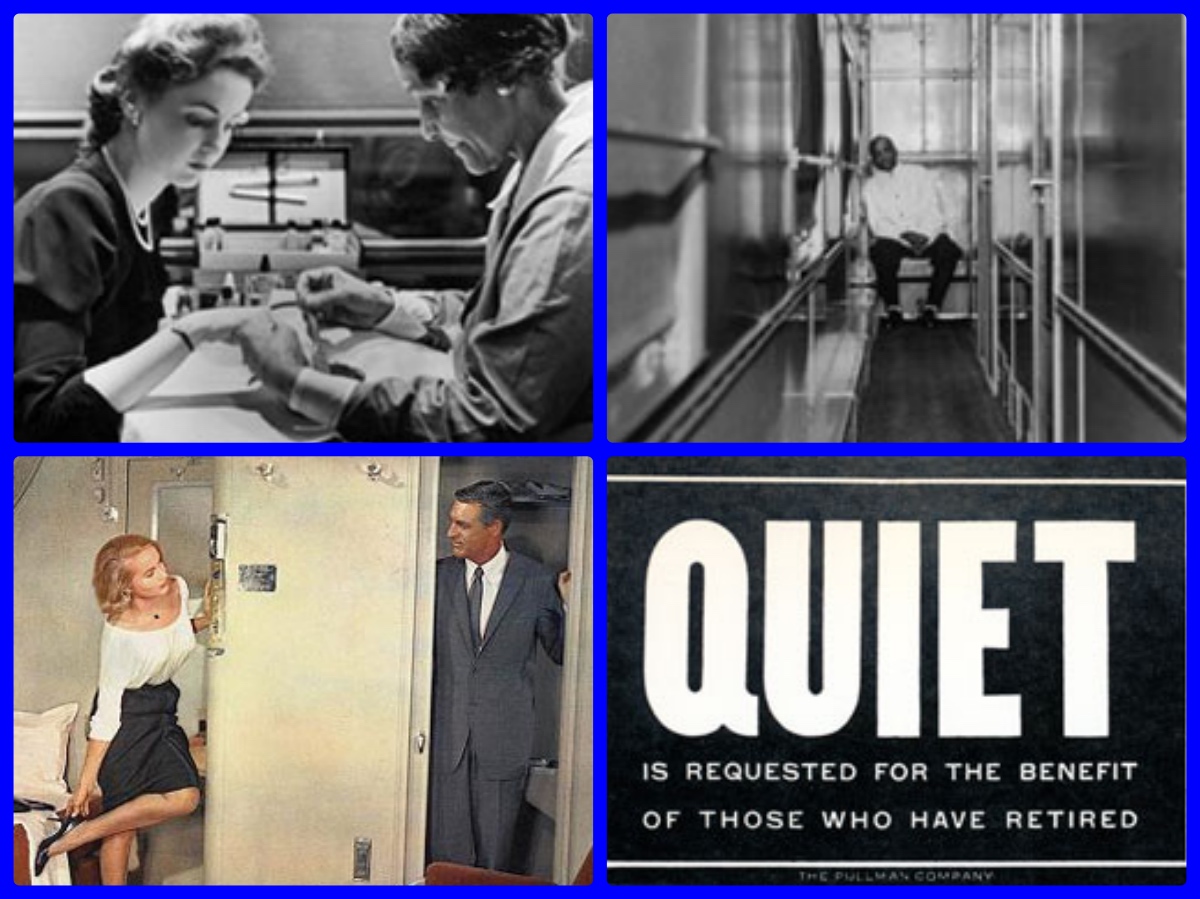 Clockwise: Passenger has a manicure with a Pullman maid; Pullman Porter catches some sleep; QUIET sign; Eva Marie Saint and Cary Grant in a Drawing Room in a scene from North By Northwest.

If leaving from New York, you departed at 6 p.m. and arrived the next morning in Chicago at 8:45 a.m. Settling in for the evening, after boarding the Century in downtown Manhattan, you enjoyed cocktails in the observation car, dinner with views of the Hudson, a good night sleep and then with breakfast in bed or in the dining car. 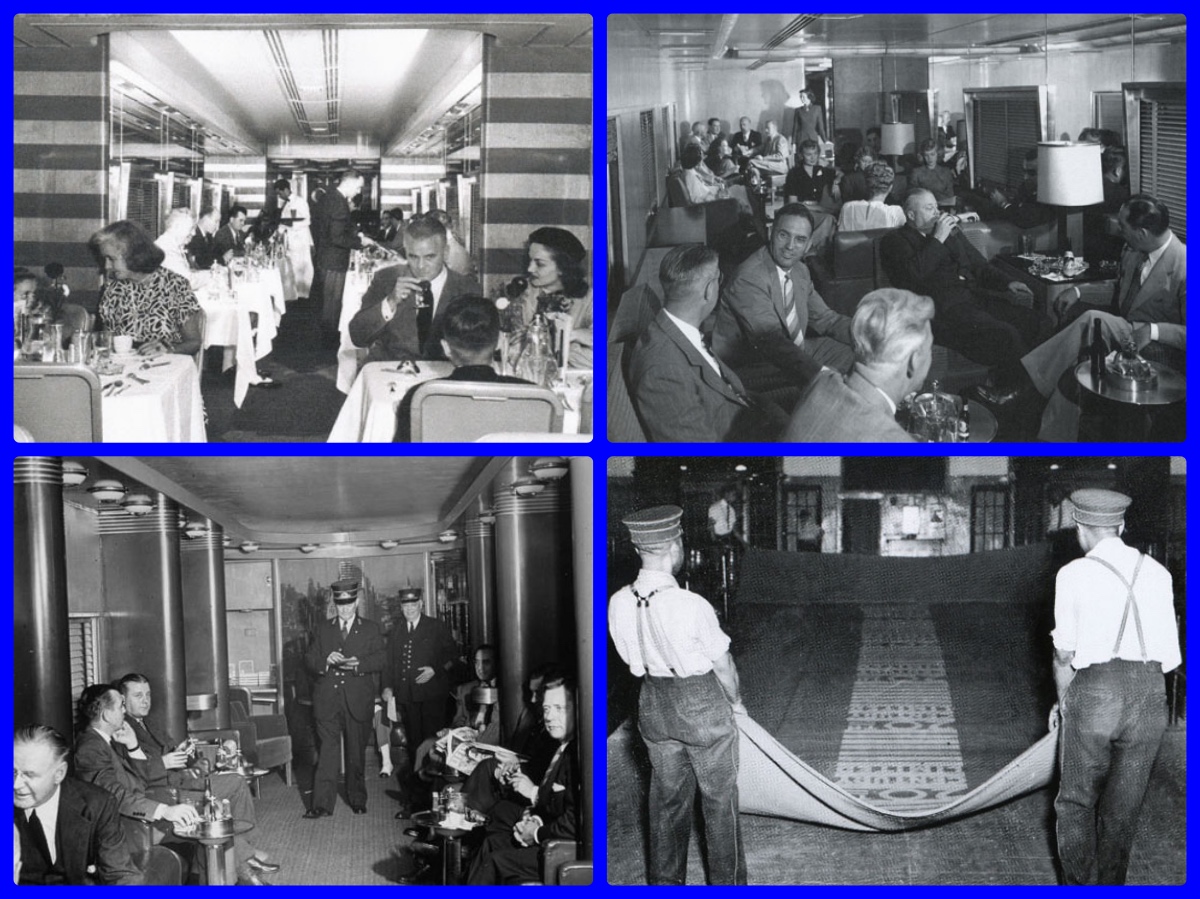 The dress was business formal with no room for baseball caps. Standing in line for security, enduring a long cab ride or enduring hours on the tarmac because of bad weather were not included in your first class Pullman fare. 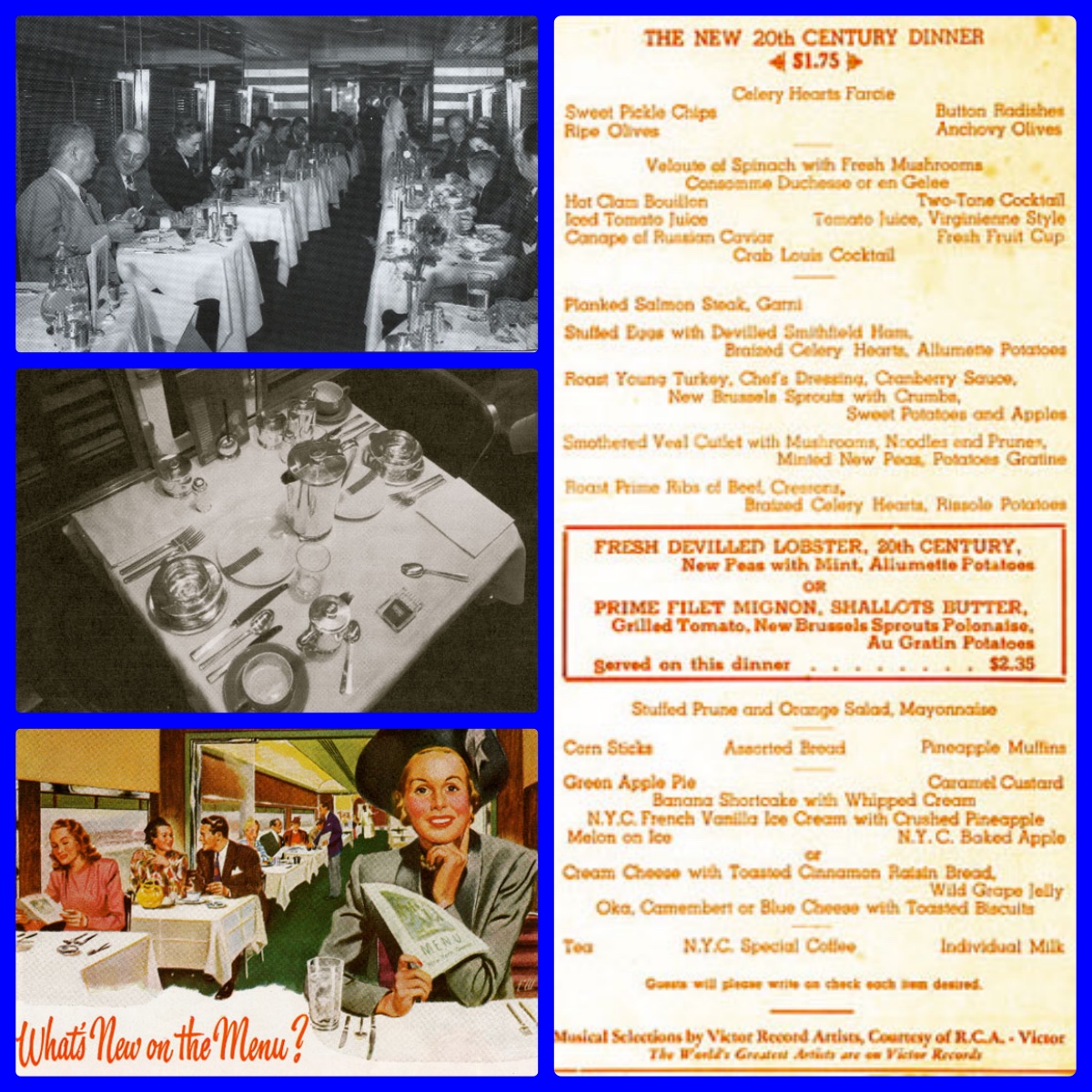 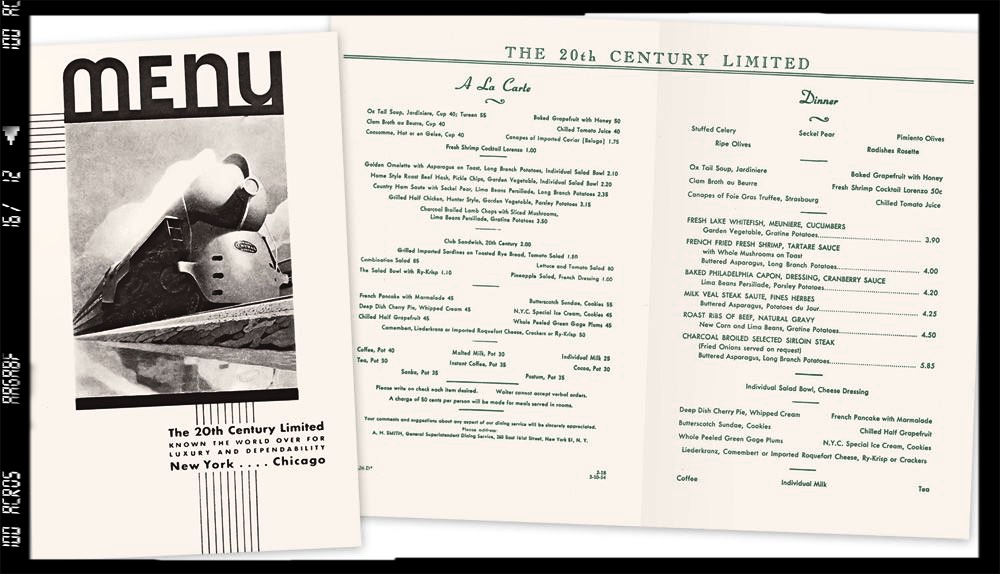 Dining on the 20th Century Limited. Menu from the late 1930s. 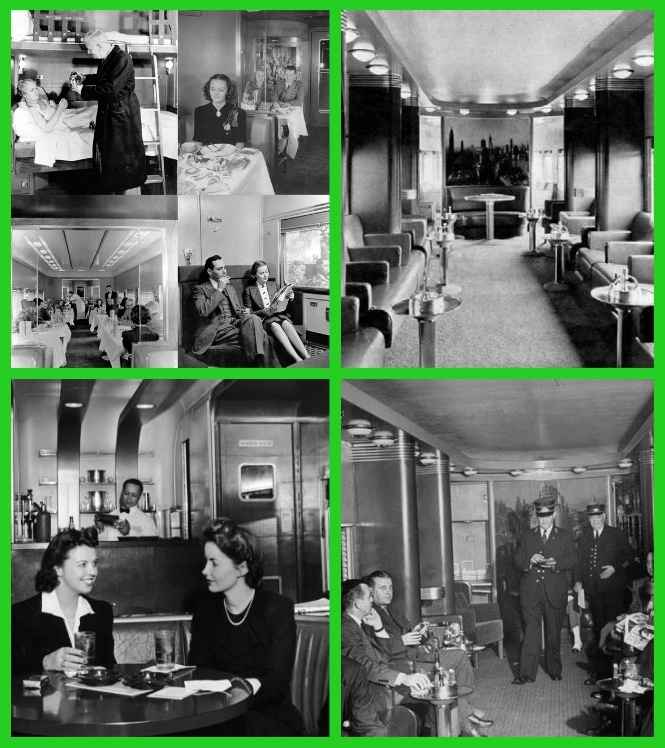 Passenger lists were maintained for each “sailing” of the Century. Bob Hope, Bette Davis or Doris Day might be aboard. But the Century was really the train for Chicago’s elite. The Wrigleys, Blairs, Bards, and Fields were “the Century regulars” and occupied the bedroom suites, compartments, and drawing rooms. 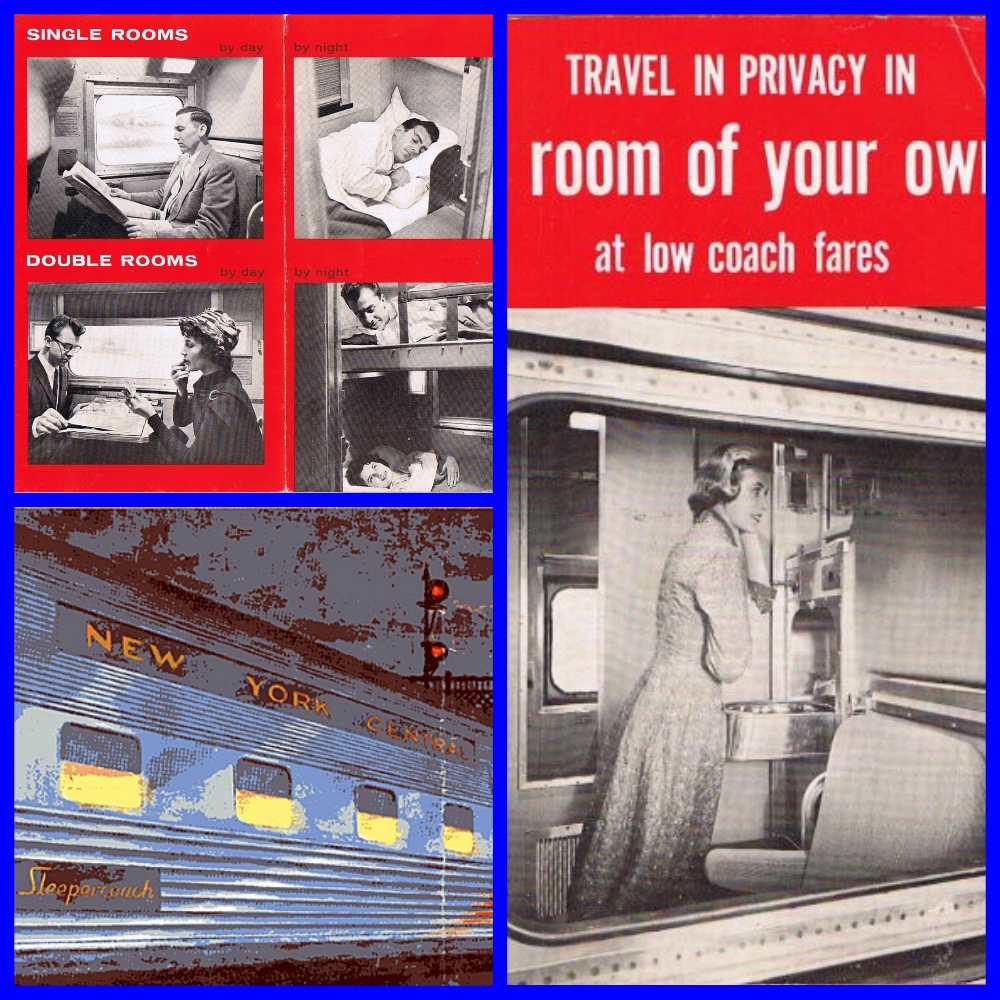 Slumbercoach on the New York Central. 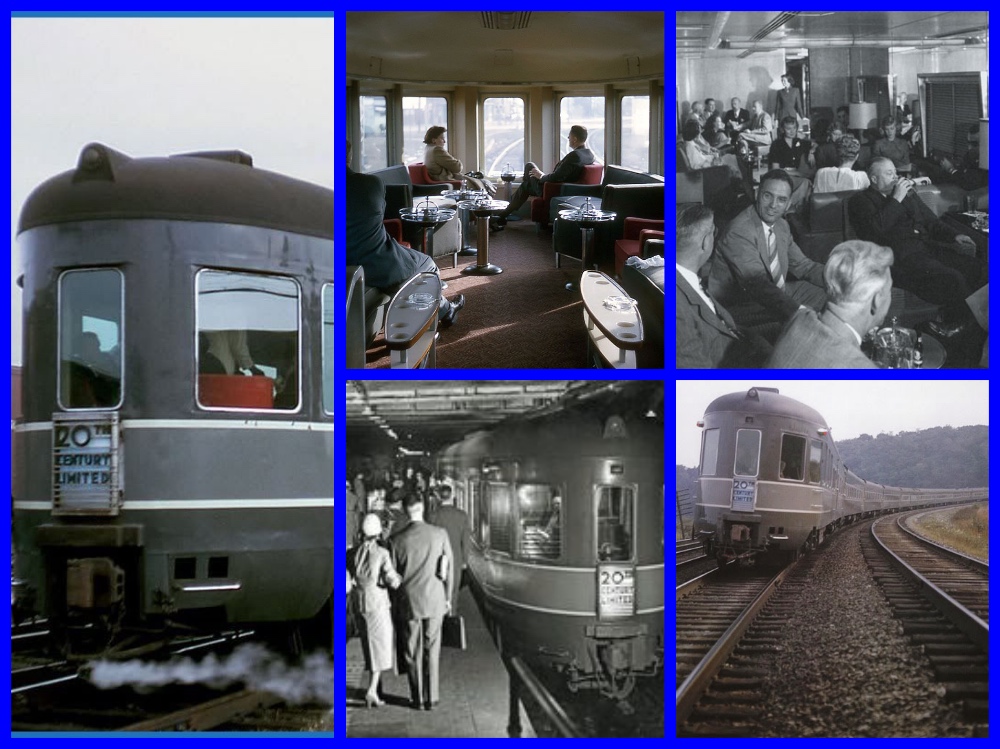