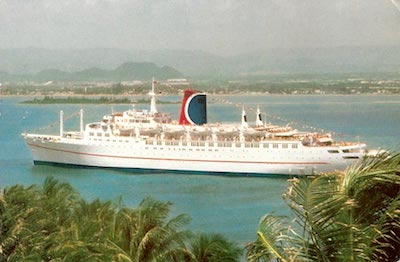 The Empress of Canada, soon to become the Mardi Gras. Many scenes from a trans-Atlantic crossing in 1972 on the Empress of Canada. The Mardi Gras would be a big plus for Miami which was just starting out as a major cruise departure port that would replace New York. Carnival Cruises was initially in a fragile financial position, and it was essential that the MARDI GRAS should earn money immediately. There was no time for a refit, and on March 11, 1972, the MARDI GRAS left Miami on her first cruise for Ted Arison. Mardi Gras made big news when it went aground just outside of Miami. It turned into a 24-hour party and gave Carnival lots of publicity.

At that point, she was the largest liner using the port of Miami and was too deep-drafted, with the result that in the fully laden condition the MARDI GRAS ran aground on departure. After twenty-four hours of fruitless effort to free her, the passengers were disembarked. Ballroom, Theatre and Dining Room on the Mardi Gras. In August 1979 the MARDI GRAS sailed on a cruise to Canada, and upon arriving in Montreal, she received a fireboat welcome on her first visit to the port for eight years. Another Canadian cruise was operated in 1980, but as it turned out, this was the last time that the MARDI GRAS ever sailed in Canadian waters. Carnival added a slide for the ship’s pool for a first in cruising.

In the late 60s and early 70s, cruising began to undergo a renaissance. Rather than serving as a more comfortable means of transport, lines started to market the ships as destinations in themselves. Many lines claimed to have “invented” Caribbean pleasure cruising, but Carnival, in particular, excelled in the new marketplace and began purchasing ocean liners and converting them to early prototypes of their “Fun Ship” model. The Mardi Gras, Carnivale, and Festivale introduced familiar concepts like tiered decks, indoor and outdoor pools, casinos, sports decks, and lounge-style entertainment, with each ship adding more innovations than the last. Festival even featured the first cruise ship water slide, although it was little more than a playground slide.

By 1992 Carnival was operating eighteen ships and carried 1.1 million passengers that year.

In 1993 the MARDI GRAS was chartered by Carnival Corp for a ten-year service to a variety of secondary cruise lines with the ship’s name changed to the Olympic, Star of Texas, Lucky Star, Apollo, and Apollon.

As for cruise history, the MARDI GRAS will always be the cornerstone of Carnival Cruise phenomenal success.