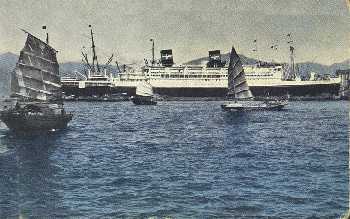 Carnival Corp. Teams With Chinese Wealth Fund to Build Chinese Brand… Costa and Princess soon to be sailing from Shanghai

Up until the late 1940s, American ships sailed to China from San Francisco and Los Angeles.

The Crystal Symphony sails the foggy Kanmon Strait to Kochi. Crystal could be next to serve the deluxe Chinese market.

China State Shipbuilding Corporation (CSSC) and China Investment Corporation (CIC) have entered into a 25-year joint-venture with Carnival Corp. on the creation of a multi-ship domestic Chinese cruise brand featuring both new and existing ships. The Costa Allegra docked in Shanghai.

The Chinese partners will own 60 percent of each ship, while Carnival Corp. will own the remaining 40 percent. The groups signed a memorandum of understanding in Tianjin last year; the first ten years of the deal will involve an investment of $4 billion in total.

The United States, under the current administration, has done very little to promote shipbuilding. But

Carnival Corp., and American corporation, will operate the ships once the new brand launches. The deal to build the new ships, which will entail a separate joint-venture between Carnival Corp., CSSC and Fincantieri in Italy, has yet to be finalized.

Shanghai, China, is emerging as a major cruise homeport. American steamship lines served China up until the 1950s…

“Cruising has been specifically listed by the Chinese government as an industry they want to encourage in ship building and creating domestic cruise brands,” said Carnival Corp. global COO Alan Buckelew. “If the Chinese government is going to encourage state-owned enterprises to start building cruise ships and develop brands, we felt it was in the best interest for the industry for Carnival to be involved.”

Carnival Corp. executives conceded that the first ship under the new brand may be a rebranded existing vessel. No decisions have been made on the flagging of the new brand, but the company is leaning toward the U.K. flag.

The size of the vessels has yet to be determined, as well. Carnival Corp. is now conducting market research to figure out its target consumers and the type of cruise experience they want.

“In China, it appears to us that our target audience is doubling over the next five years,” said Buckelew. “And if China was to slowdown in terms of outbound travel, we can move our ships somewhere else.”

The competition in the Chinese cruise market is heating up.

Carnival Corp. & PLC is adding ships from two more of its 10 cruise brands in China in 2017.

The move will give Carnival Corp. four cruise brands with ships committed to the growing Chinese market on either a year-round or seasonal basis.

In two years, a ship from Carnival Cruise Line and its German line AIDA Cruises will join vessels from Princess Cruises and Costa Cruises already sailing in China.

Next year, Carnival Corp. will have six ships in China — four from Costa and two from Princess — which represents a 58 percent increase in its total capacity in that market, the Miami-based cruise company said.

“As we execute our multibrand growth strategy in China, we are emphasizing choice and variety in our offerings to match the different tastes and preferences of Chinese travelers,” Carnival Corp. President and CEO Arnold Donald said in a news release.

Last week, Princess announced the name of its new China ship under construction in Italy — Majestic Princess. The 3,560-passenger ship will begin year-round sailings in summer 2017 from its base in Shanghai to Japan and Korea, Princess said.

Rival cruise operators, including Royal Caribbean Cruises Ltd and Norwegian Cruise Line, also have set their sights on China, which is likely to become the world’s largest cruise market in coming years as Chinese demand for cruising increases.

Royal Caribbean Cruises — the world’s second-largest cruise operator — already has a handful of ships from its Royal Caribbean International brand sailing in Asia and others under construction earmarked for China.

Carnival Corp. said Tuesday that more details about the Carnival and AIDA ships headed to China will be announced by the individual brands shortly.