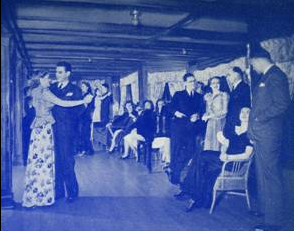 The Union Steamship “Cardena” clipped a nearby rock and stops in at Sullivan Bay for repairs. These steamers were often the only link to the “outside” world. Comox, Capilano and Coquitlam were a trio of early Union steamships assembled and launched in Vancouver.