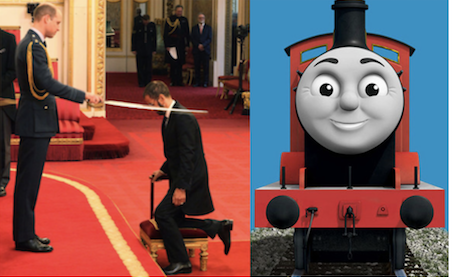 Ringo Starr with his wife, Barbara Bach, following being made Knight by Prince William at Buckingham Palace. Ringo Starr and various images of steam trains that were operating out of Liverpool Lime Street Station during his childhood and teenage years.

Starr was born on July 7, 1940, in the working class Dingle area of Liverpool.

Much of his childhood was affected by illness and his frequent visits to hospitals, for appendicitis and tuberculosis among other ailments, caused his education to suffer. It was during his blighted youth that he developed a love of music and a knack for playing the drums.

He also took odd jobs before achieving great success, working as a waiter on a tour boat along with a stint with British Rail. Ringo and the Beatles on their 1964 tour of the USA traveling from New York to Washington DC on the Pennsylvania Railroad’s streamliner the Congressional Limited.

Starr met The Beatles in Hamburg in 1960, and two years later he replaced the band’s drummer Pete Best, a takeover that was controversial at the time.

Following the band’s split in 1970 after a decade of recording pop classics and touring the world, Starr released two albums before the end of that year, Sentimental Journey and country-style effort Beaucoups Of Blues. He achieved success with his 1973 album Ringo, which peaked at number seven in the UK and number two in the US, although he is the only Beatle to have failed to top the UK singles chart as a solo artist.

Over the years, Starr has continued with his solo career and has released 19 studio albums; the latest being 2017’s Give More Love.

In 1984, Starr became the narrator for children’s TV series Thomas The Tank Engine And Friends, an effort that went on to become a huge success.

Starr’s knighthood comes more than half a century after he and the other Beatles received MBEs in 1965.

He also took odd jobs before achieving great success, working as a waiter on a tour boat along with a stint with British Rail.

On August 18, 1962, Ringo Starr officially joined Paul McCartney, John Lennon, and George Harrison in what would become one of the most important favorite music acts of all time, or as Ringo says, “the biggest band in the land.” Ringo Starr on the Congressional Limited with the Beatles.

He said the honor “means a lot” and joked with reporters afterward: “I expect you to use my title.”

It comes more than half a century after the youthful Beatles first went to Buckingham Palace to receive MBE awards.