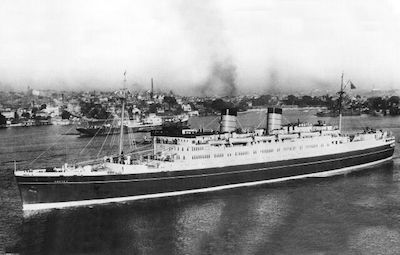 The TSS Awatea was one of the most beautifully designed compact liners to be built in the mid-thirties and was, without doubt, the ultimate statement in luxurious service. Far away from the Trans-Atlantic services – “Downunder” – Union Steamship Company operated a fleet of excellent passenger ships between Australia and New Zealand until 1960. She was also known as “The Queen of the Tasman Sea” and in October 1937 set a record between Auckland and Sydney of 55 hours, 28 minutes. In achieving this, no less than 23,881 shaft horsepower was unleashed at an average speed of 22.89 knots. In recognition of this, she was presented a stainless steel greyhound that was mounted on the foremast of the ship. Captain Davey was the Master most associated with Awatea and on his retirement in 1941, he took (or was presented with it) the greyhound with him and had it mounted on his home in Auckland.