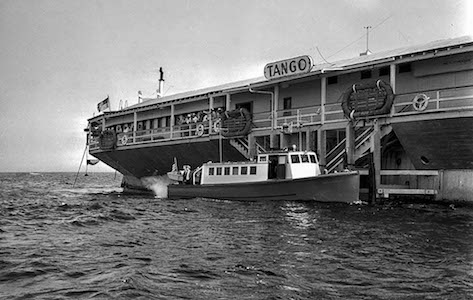 Video clip of the Rex gambling ship anchored 3 miles off the Santa Monica coast in the early 1930s. The Trans-Atlantic liner or real REX The boats appealed to middle-class patrons Fitts argued that Santa Monica Bay constituted an “inland” body of water and therefore, the coastline was not the right coastline of the State of California.

For a true state coastline, one had to draw an imaginary line between Point Vicente and Point Dume. Consequently, the Rex would have been required to anchor itself many miles out to sea, a proposition that would have required an inconvenient and unattractive seafaring trip to visit the ship. Cornero, for his part, countered that Santa Monica Bay was not, in fact, a bay.

It was a bight, a large coastal indentation. Cornero proclaimed that Santa Monica Bay was more accurately called Santa Monica Bight. Although the court sided with the District Attorney, it was overturned upon appeal. Cornero returned to operating the Rex. He called them “a great nuisance” because they drew millions of dollars from legitimate purposes and would inevitably lead to the appearance of floating narcotics dens and houses of prostitution. He reasoned that states had the power to abate a nuisance even if it lies outside state jurisdiction.

After failing to comply with a state order to cease, all but one of the gambling ships were seized by law enforcement.

The Rex, however, gated off its landing platform and turned a fire hose on raiding law enforcement vessels. Thus began the siege of the Rex. Since the Rex had no engines of its own and thus could not sail off, Warren figured that the ship would eventually have to surrender or starve.

After eight days, Cornero surrendered, he said, “because I need a haircut.”  Law enforcement officers swarmed the ship, tossing all of its gambling equipment into the water.

Although the seized gambling ship operators continued to maintain that their operations were legal and, Consequently, acts by law enforcement upon raiding their ships amounted to piracy, the courts upheld Warren’s legal arguments. The California Supreme Court finally agreed that Santa Monica Bight should once again be known as Santa Monica Bay. Cornero himself, however, escaped facing any charges.

Furthermore, he seldom resisted arrest unless the cops stole his whiskey. His reward? The Feds got him indicted, arrested and yanked off to the Federal Penitentiary at McNeil Island like a common criminal. Outpointed. At liberty in the 1930s, determined Tony bought the gambling ship Rex, operated her off Santa Monica to give Los Angeles citizens a chance for sea air and recreation at their expense. He carried on his work for five years. But a Los Angeles judge decided that Santa Monica harbor lay between two coastal headlands, ruled that the Rex and three other gambling ships were not outside the three-mile limit. They were seized, and Tony all but dropped out of sight.

Last spring, however, his obligation to relieve Los Angeles’ citizens of more money became too obvious to be ignored—there wasn’t a professional crap game west of Reno. Tony raised money from some “investors,” bought a 386-ft. Navy minelayer, the Bunker Hill. He had her towed to Long Beach, painted the name Lux (short for Luxury) on her side, began converting her into a gambling ship. As usual, he complied with all the laws he could find. He carefully incorporated his enterprise under Nevada statutes as the Sevenseas Trading & Steamship Co. In deference to sound sanitation practices, he had 150 gleaming new toilets installed aboard the ship. Finally, he had the white, neon-decorated floating casino towed 7.8 miles to sea—well past anybody’s three-mile limit.

Plungers & Necklines. Triumphantly, last week, he opened for business. Thousands of suckers who had queued up at shoreside water taxi landings stood shoulder to shoulder all night long on the Lux’s casino deck. The ship’s bingo corner, its 14 crap tables, 150 slot machines, twelve roulette wheels, five poker games, were busy until dawn. The order was kept by 26 polite, tough “masters-at-arms,” i.e., seafaring bouncers. A band played, and lush ladies with plunging necklines wandered about selling cigarets. Tony expansively predicted that nobody could touch him.

Tony planned to press the court fight because his water taxis were engaged in foreign commerce, thus were outside Los Angeles County jurisdiction. But at week’s end, it looked as if Tony Stralla would never be able to convince an unsympathetic D.A. that he lived and worked only for the community good.