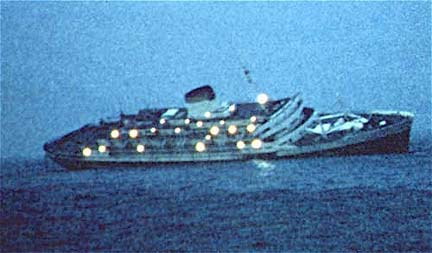 Like the Titanic it was considered the safest passenger vessel of its time, with a double hull, radar, and eleven watertight compartments. Nevertheless it was saddled with several design flaws, the most noteworthy being a tendency to list. It had its first passenger run in 1953 to New York City. The Andrea Doria sinks on July 26, 1956 after being rammed by the SS Stockholm.

The Andrea Doria’s reign lasted just over three years. On the night of July 25, 1956, bound for NYC, it collided with a Swedish liner of comparable size bound for Gotheborg, the SS Stockholm, in extremely foggy weather in the North Atlantic off Nantucket.

There was no radio communication between the vessels, and though radar indicated their ships’ presence to near each other, Captains Piero Calamal and Harry Gunnar Nordenson were unable to adjust their courses and prevent fatal contact.

46 passengers of the Andrea Doria were killed at the area of the Stockholm’s impact while ten crew members of the Swedish vessel died. Half of the Andrea Doria’s lifeboats were unlaunchable due to the list the vessel had after the impact. This was very similar to the Costa Concordia’s misfortune.

The Stockholm sent several lifeboats to the Doria’s aid after the crew determined the Swedish ship was in no immediate danger of sinking. There were other oceangoing vessels in the immediate vicinity (unlike the Titanic tragedy 44 years earlier) which prevented a large number of fatalities.