LATEST
Home > ALL POSTS > Anchored: Will Philly be stuck with the SS United States forever? 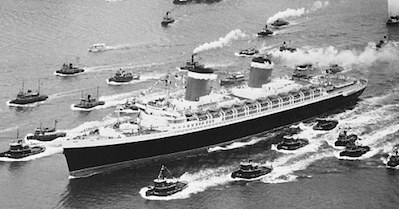 Is time running out for the famous ocean liner? Is the SS United States ready to be scrapped?

Thanks to Mark Dent at www.billypenn.com

Pennsylvania Congressman Bob Brady needed to vote soon, but he hung back in his Washington, D.C. office for a few minutes longer to talk on the phone because the subject is South Philly — precisely the hulking monster of an old passenger ship planted in the Delaware River across from IKEA and Longhorn Steakhouse.

“What the hell’s going on with that thing?” Brady asked.

It’s the perfect question: What the hell is going on with the SS United States? The SS United States arrives in New York on its maiden voyage in 1952.

Media have been all over the SS United States for years (we included). The Washington Post gave the ship #longform attention in 2014. The New York Times has written about it four times in the last three years. These articles and the dozens to hundreds of others bring up the ship’s plight and allude to some grand future, where the ship becomes an entertainment center, likely in New York, relieving Philly of its “giant ocean liner rusting in a harbor near a bunch of strip clubs” duties. But will that ever happen? The SS United States was initially supposed to be in Philadelphia for 21 days, according to media reports from 1996. Days. We are now in the 21st year it has been docked on the Delaware, and there’s seemingly no end in sight. Probably because there is no end in sight, according to developers who can’t imagine any use that would bring a return on investment for something so large, so old and so expensive. There is no template with the SS United States. The number of times old ocean liners has been redeveloped can be counted on one hand, the most prominent example being the Queen Mary in Los Angeles. It made its last trip in 1967 and the process of repurposing it into a museum/hotel/restaurant space began immediately. When it opened in 1971, the ship was widely known, contained many of its original flourishes and had not decayed over the years.

Still, for decades, ownership of the Queen Mary was passed from company to company, each having little, if any, financial success. The latest owners, as of last year, planned to spend about $15 million more on the ship and $250 million to redevelop the parking-lot-laden area around it. SS United States developers would be gambling on 48 years of rot in an object whose heyday is remembered by few.

The Congressman hears about the SS United States from his constituents from time to time. They used to enjoy seeing the giant ship as they traveled down Columbus Boulevard, especially after Lenfest had paid to light it up. That’s been changing the last few years.

“They’re starting to like it less,” Brady said, “because it’s decaying so bad.”