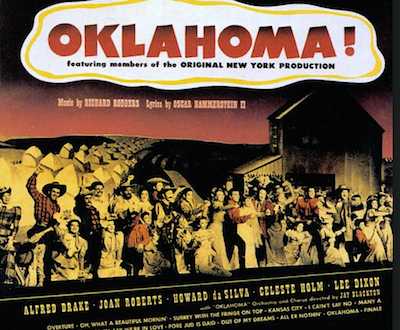 The 1943 productions of OKLAHOMA recreated at the University of North Carolina.

By the early 1940s, Rodgers and Hammerstein were each well known for creating Broadway hits with other collaborators.

Though less productive in the 1930s, Hammerstein wrote musicals, songs, and films, sharing an Academy Award for his song with Jerome Kern, “The Last Time I Saw Paris,” which was included in the 1941 film Lady Be Good.

By the early 1940s, Hart had sunk into alcoholism and emotional turmoil, and he became unreliable, prompting Rodgers to approach Hammerstein to ask if he would consider working with him. Helburn contacted Richard Rodgers and Lorenz Hart, whose first successful collaboration, The Garrick Gaieties, had been produced by the Theatre Guild in 1925. Rodgers wanted to work on the project and obtained the rights for himself and Hart. Rodgers had asked Oscar Hammerstein II to collaborate with him and Hart.

Green Grow the Lilacs with Franchot Tone in 1931…

Coincidentally in 1942, Hammerstein had thought of musicalizing Green Grow the Lilacs, but when he had approached Jerome Kern about it, the latter declined. This partnership allowed both Rodgers and Hammerstein to follow their preferred writing methods: Hammerstein preferred to write a complete lyric before it was set to music, and Rodgers preferred to set completed lyrics to music.

The role reversal in the Rodgers and Hammerstein partnership permitted Hammerstein to craft the lyrics into a fundamental part of the story so that the songs could amplify and intensify the story instead of diverting it.

Musicals of that era featured big production numbers, novelty acts, and show-stopping specialty dances; the libretto typically focused on humor, with little dramatic development, punctuated with songs that effectively halted the story for their duration. Between the world wars, roles in musicals were usually filled by actors who could sing, but Rodgers and Hammerstein chose, conversely, to cast singers who could act. DeMille provided one of the show’s most notable and enduring features: a 15-minute first-act ballet finale (often referred to as the dream ballet) depicting Laurey’s struggle to evaluate her suitors, Jud and Curly.

The first title given to work was Away We Go! which opened for out-of-town-tryouts in New Haven’s Shubert Theatre on March 11, 1943. Oklahoma! is a hit!

Todd had been wrong; the show opened on Broadway to raves from the critics, sold out, and won a special Pulitzer Prize.

The musical creativity stimulated Rodgers and Hammerstein’s contemporaries and ushered in the “Golden Age” of musical theatre.

The iconic Oklahoma! continues to be one of the most produced musicals in American history. Braxton Molinaro (Jud Fry) takes Rebecca Laurie (Rebecca Moyes) at the end of the first Act in North Carolina School of the Arts’ recreation of the 1943 original production of OKLAHOMA!”