American Export Lines: A view of one of the popular “FOUR ACES” – EXCAMBION, EXETER, EXOCHORDA, and EXCALIBUR. (Above: Dining room) These combination passenger-cargo ships carried the American flag to ports around the Mediterranean from their late 1940s launch until the mid-1960s. (Left to right: Main Lounge and Bar) They carried 124 passengers in First Class and were among the first ships to be completely air conditioned.

They provided excellent American service and were very popular. (Above: Suite; below: swimming pool) The four sister-ships were built to replace four 1931 ships of the same name which were passed to the US Navy as transports in 1941. (Top: Buffet on deck; Holiday Magazine advert for Aces) Both classes were known as the “Four Aces”.

The post war ships were also all built as US Navy attack transports, and all were converted and delivered to American Export Lines in 1948.

They operated between New York and the Mediterranean.

Noted industrial decorator Henry Dreyfuss, whose many designs included the “Twentieth Century Limited” locomotive (1938) for the New York Central Railroad, and the “500” desk telephone (1949), the Bell System standard for 45 years, designed the interiors.

Zalud Marine Corporation executed the design, including joiner work, that included thousands of feet of carpet, specially woven fabrics and an unusual amount of glass.

Exochorda was among the first ships with fully air-conditioned staterooms, many of which were also soundproofed. The ship’s glass enclosed promenade deck featured a built-in swimming pool and play area adjacent to a modern bar and smoking room. (Passengers dining aboard one of the Aces.  American ships carried military officers, their families, along with diplomats, etc.)

All artwork for the new 4 Aces ships had been selected by interior designer Henry Dreyfuss.

Dreyfuss had commissioned artist Miné Okubod to create a mural reflecting the ship’s Mediterranean sailing route, to be located in the ship’s main foyer. Other notable artwork included white-on-black depictions of life at sea — whimsical “doodles” by artist Saul Steinberg — which added subtle context to Promenade’s bar and smoking lounge. While in the dining lounge, passengers were treated to Loren MacIver’s mural portrayal of trade and commerce activities along the sailing route. Despite being pictured in promenade’s forward lounge in many “4 Aces” print advertisements, sculptress Mitzi Solomon had created only two unique marble carvings that were used on other “4 Aces” vessels.

They departed from Hoboken, New Jersey sailing regularly to Cadiz, Barcelona, Marseille, Naples, Beirut, Alexandria, Piraeus, Naples, Marseille, Genoa, Livorno and Barcelona according to Milton H.Watson’s book US Passenger Liners , although this route as described seems be running in circles around the Mediterranean.

The remaining two ships were sold to C.Y.Tung’s Oriental Overseas Line in 1965. 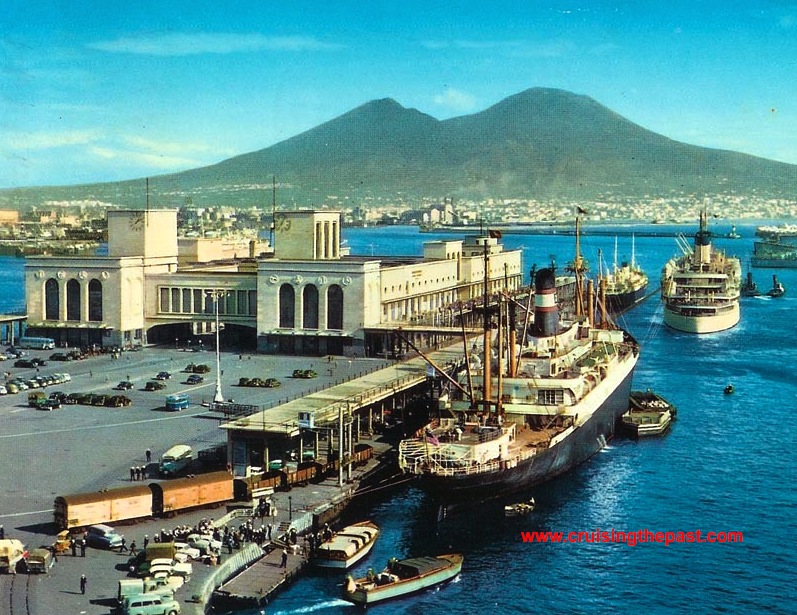 Postcard of Excambion (2) at Naples (with Queen Frederica leaving). One of the FOUR ACES arriving in New York.

History of the AMERICAN EXPORT LINES

American Export Lines, New York, was the biggest US-flag shipping company between the US east coast and the Mediterranean from 1919 to 1977, offering both cargo ship services and passenger ship services, until declaring bankruptcy and was acquired by Farrell Lines, New York.

The Export Steamship Corporation Inc. was founded in January 1919 under the laws of the State of New York. The first Export transatlantic sailing was undertaken by the 3,274 ton chartered freighter MILLINOCKET, which left New York on 16 May 1919 for Antwerp. The Export Steamship Corporation is often regarded as having run exclusively between the USA and the Mediterranean but, in fact, its first few sailings were all to Northern Europe. The first Mediterranean voyage was taken by the LAKE FESTINA, a brand new ship built at Toledo, Ohio, hence her sailing on 26 July from Montreal for Gibraltar, Piraeus and the Black Sea.

The 4,969 ton HOG ISLAND, newly completed by the American International Shipbuilding Corporation of Hog Island, Pennsylvania, reached New York in ballast on 19 October 1919 from Philadelphia. She sailed again on 26 November for Gibraltar and Piraeus, and was the first of a fleet HOG ISLAND freighters to run for the Company. By degrees all the smaller ships were withdrawn. The Company received its first subsidy in 1925 in return for an undertaking to operate 60 or more sailings a year from America to the Mediterranean and the director Henry Herbermann purchased sixteen HOG ISLANDERS and two other ships from the United States Shipping Board for a purchase prise of $ 1,062,000. It became effective with the departure of the COEUR D’ALENE from New York on 25 August. At about the same time, the description American Export Lines came into popular use, although the official title was still Export Steamship Corporation. By 1928 the Company had the largest privately owned American flag fleet in the North Atlantic trade, with 22 ships.

Henry Herbermann, president of the line, announced on 3 August 1928 that for the sake of uniformity it had been decided to give all the ships names bearing the prefix EX. The first to be renamed were THE LAMBS, which became the EXPORTER, and the HOG ISLAND, which became the EXPRESS. In accordance with the Merchant Marine Act of 1928, the Company was simultaneously awarded a ten year mail contract at increased remuneration.

A few weeks later the Company proposed to build four passenger and cargo vessels for a new mail service from New York to the Mediterranean, and a loan of 75 per cent of their cost having been approved by the United States Shipping Board. Hitherto, the American Export ships had carried a maximum of 12 passengers, and as an indication of their new policy two of the existing fleet, the EXARCH and EXCELSIOR, were converted to carry 37 passengers, all in outside cabins on the bridge deck. The dining saloons were enlarged, and the ships were fitted with lounges and smoking rooms. The EXCELSIOR was ready in time to sail from New York on 21 May 1929 and the EXARCH on 4 July. A third ship, the EXILONA, was also converted and left on 10 October. These round voyages occupied about 75 days, the fare was from $375 and sailings were approximately once a month. There was no fixed itinerary. On the first of two typical occasions, calls were made at Gibraltar, Malta, Alexandria, Jaffa, Haifa and Beirut, and on the second at Gibraltar, Piraeus, Salonika, Constantinople and Constanza.

In March 1934 the United States Commerce Department demanded a complete reorganisation of the Export Steamship Corporation, the first step being the resignation of Henry Herbermann from the presidency. A year later, the New York Shipbuilding Corporation, builders of the FOUR ACES and holders of a controlling interest in the Company, sold this interest to a syndicate which included Lehman Brothers and Thomas L. Chadbourne. Finally, a new company,American Export Lines Inc. was formed in August 1936.

In April 1946 American Export announced their first post-war schedule of passenger sailings to Mediterranean ports by the 24,469 ton motorship VULCANIA, built in 1927 for the Cosulich Line and later incorporated into Italia Line, and the C-4 type vessels MARINE SHARK and MARINE CARP. The VULCANIA was, in fact, already engaged in her first commercial voyage for the Company, her sixth and last ending at New York on 1 November 1946. A fortnight later, she and her sister ship, the SATURNIA, which had been laid up at New York for several months, were handed back to Italy. Subsequent sailings were under the auspices of Italia, who appointed American Export as their American agents.

It was announced in November 1947 that the Company was planning to build two 23,000 ton express liners for a new service between New York, Naples, Cannes and Genoa, a route that would undoubtedly compete with Italia, provided the Maritime Commission agreed to put up the full 50 per cent construction subsidy allowable under the 1936 Merchant Marine Act. In addition, work had already started on the rebuilding of four smaller ‘ACE’ type passenger ships, which had been built by the Bethlehem Shipbuilding Corporation’s Sparrow Point yard to American Export specifications, and subsequently taken over by the US Navy as attack-cargo vessels.

The 23,719 ton INDEPENDENCE and CONSTITUTION, named after two of the American Navy’s most famous sailing ships of the war of 1812, were built by the Bethlehem Shipbuilding Corporation at Quincy, Massachusetts. They were twin-screw ships propelled by double-reduction geared turbines at a service speed of 23 knots, and could accommodate 295 first class, 375 cabin and 330 tourist passengers.

Late in 1960 the American Export Isbrandtsen Lines entered into an agreement with the United States Maritime Commision to operate the nuclear powered SAVANNAH built in 1962. The Savannah was not a big success, on no occasion did the passenger lists exceed 25 and in 1965 she became a pure cargo freighter. The Savannah was refuelled in 1968 after four years of service but she was not a big succes. The SAVANNAH was laid up at Savannah on 10 January 1972 after her nuclear core was removed in 1971. It was announced in October 1960 that the Isbrandtsen Company Inc., of New York, had acquired a controlling interest in American Export Lines by buying the holdings of Mr & Mrs C. Michael Paul. In October 1962 the new title American Export & Isbrandtsen Lines came into use, amended a year or so later to American Export Isbrandtsen Lines Inc. A new houseflag was introduced at this time to denote the change of ownership.

The American Export Lines were acquired on 28 March 1978 by Farrell Lines Inc. of New York, a line dating back to 1926 and running services from East and Gulf Coasts of the USA to West, South and East Africa and to Australia and New Zealand. And from North Pacific Coast ports to Australia, New Zealand and the South Pacific. As a result, Farrell Lines became the largest privately-owned shipping company in the United States. The name American Export Lines has largely been dropped from advertisements, but the description American Export Service is retained in connection with Farrell services from East Coast ports of the USA to the Mediterranean, to the United Kingdom and to Northern Europe.