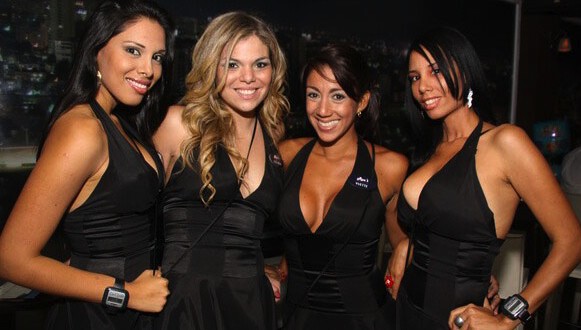 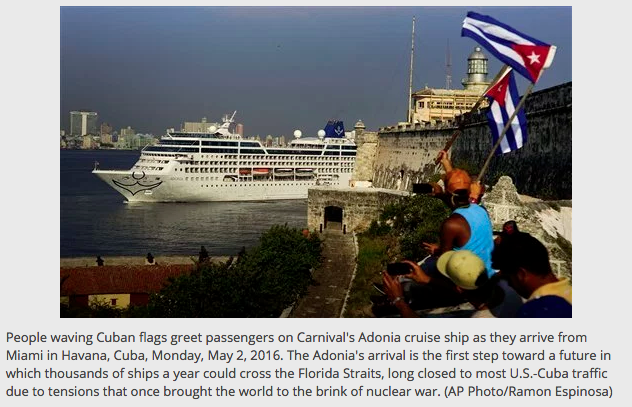 THE ADONIA SAILS TO CUBA… 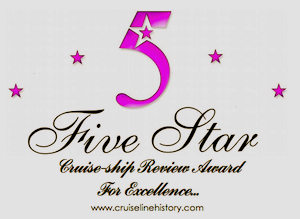 Greeted with rum drinks and salsa dancers, the first passengers to cruise from the U.S. to Cuba in nearly 40 years streamed Monday into a crowd cheering the rebirth of commercial travel on waters that served as a stage for a half-century of Cold War hostility. 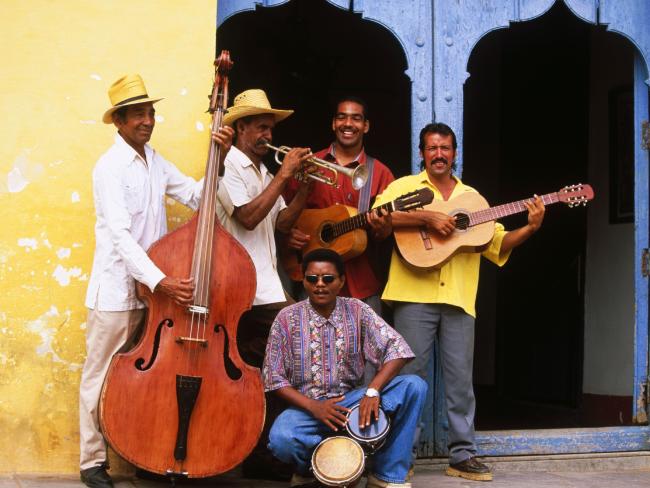 Many watching the festive arrival praised a Cuban government decision to drop a longstanding ban on Cuban-born people returning to their homeland by sea, a step that allowed 16 Cuban-Americans to make the journey from Miami.

Deluxe suite aboard the Adonia…

“This is history,” said Mercedes Lopez, a 54-year-old nurse who waited for hours to see Carnival Cruise Line’s 704-passenger Adonia pull up to Havana’s two-berth cruise terminal. “We Cubans must unite, all of us. This is a step forward, a little step toward normalization, peace, family unification.” 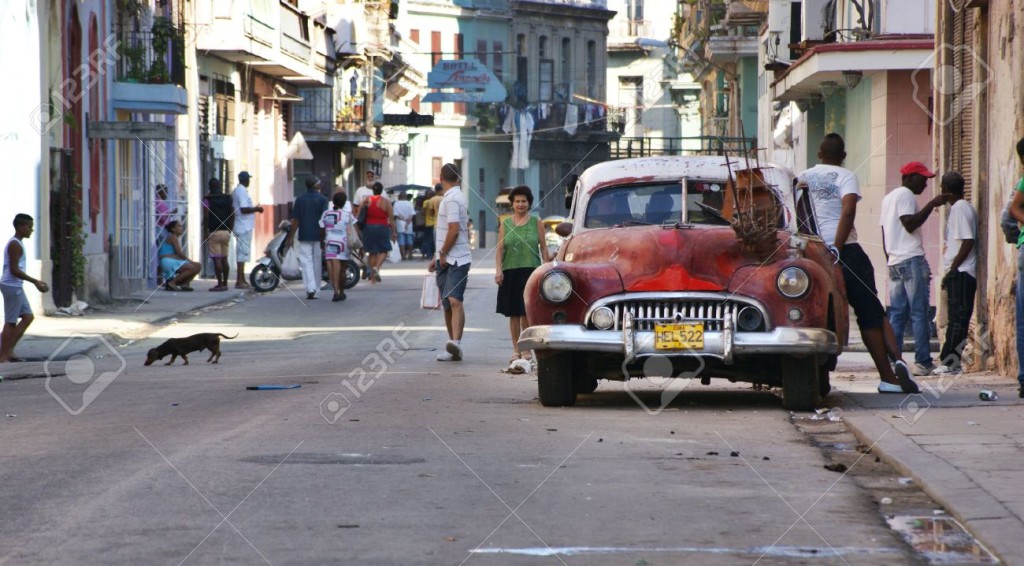 The passengers of the Adonia were welcomed by live music and dancing inside Havana’s single state-run cruise terminal. Outside, police carved a single lane into the crowd of hundreds of Cubans waiting in Old Havana’s Plaza San Francisco for passengers taking walking tours of the restored colonial center. The group included dozens of plainclothes security agents and hawkers promoting restaurants and souvenir shops, as well as many trying to witness history. 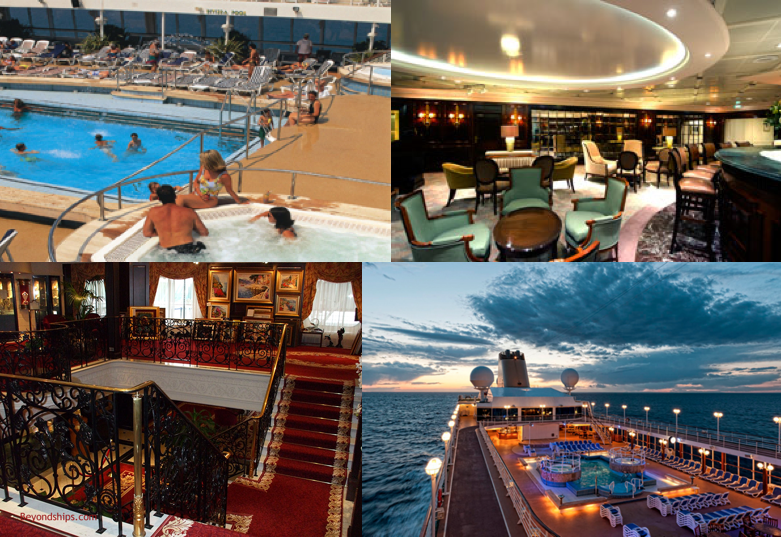 Cruise ships stopped crossing the Florida Straits from the U.S. after a brief window in the late 1970s when President Jimmy Carter allowed virtually all U.S. travel to Cuba. U.S. cruises to Cuba once again become possible after Presidents Barack Obama and Raul Castro declared detente on Dec. 17, 2014. 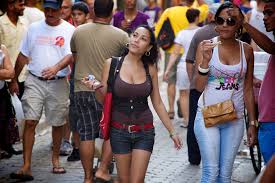 Both sides hope it is the first step toward a future in which thousands of ships a year could cross the Florida Straits, long closed to most U.S.-Cuba traffic due to tensions that once brought the world to the brink of nuclear war.

“I feel hopeful for the people of Cuba and for Cuba, hopeful that Cuba can realize its full potential,” said North Miami Beach City Manager Ana Garcia, who left the island nation in 1968 when she was 6. 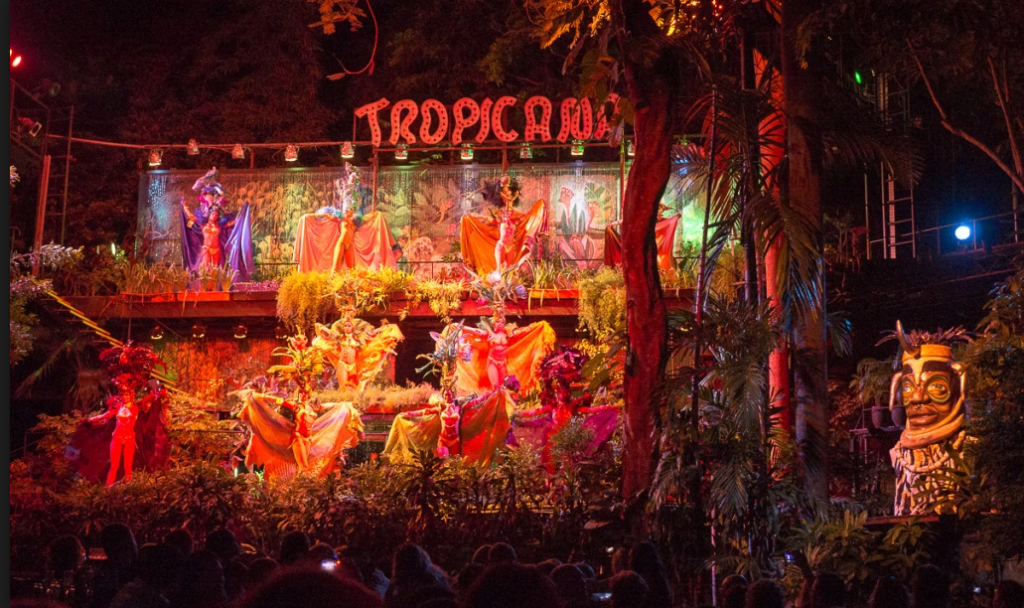 Setting sail from Miami shortly before 5 p.m. Sunday, the Adonia took nearly 17 hours to cross the Florida Straits, steaming through a waterway blockaded by the U.S. during the Cuban Missile Crisis. Tens of thousands of Cubans have fled to Florida on homemade rafts in recent decades, with untold thousands dying in the process.

The number of Cubans trying to cross the straits is at its highest point in eight years, and cruises and merchant ships regularly rescue rafters from the straits.

U.S. cruises are expected to bring Cuba tens of millions of dollars in badly needed foreign hard currency if traffic increases as expected. More than a dozen lines have announced plans to run U.S.-Cuba cruises, and if all actually begin operations, Cuba could earn more than $80 million a year, the U.S.-Cuba Trade and Economic Council said in a report Monday. 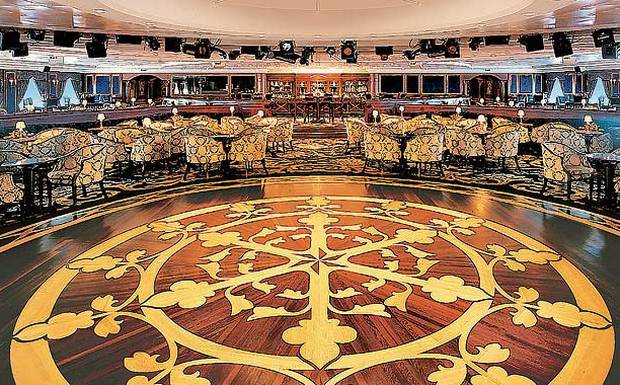 The Adonia will take eight days to circumnavigate Cuba and return to Miami. Part of the Fathom brand, the Adonia is one of Carnival’s smaller ships, roughly half the size of some larger European vessels that already dock in Havana.

Environmental scientists fear that if they’re joined by dozens more ships, there will be serious damage to an island that boasts the Caribbean’s healthiest marine life in large part due to decades without large-scale development.

Cuba cut back on all cruise tourism in 2005 after Fidel Castro blasted cruise ships during a 4½-hour speech on state television. 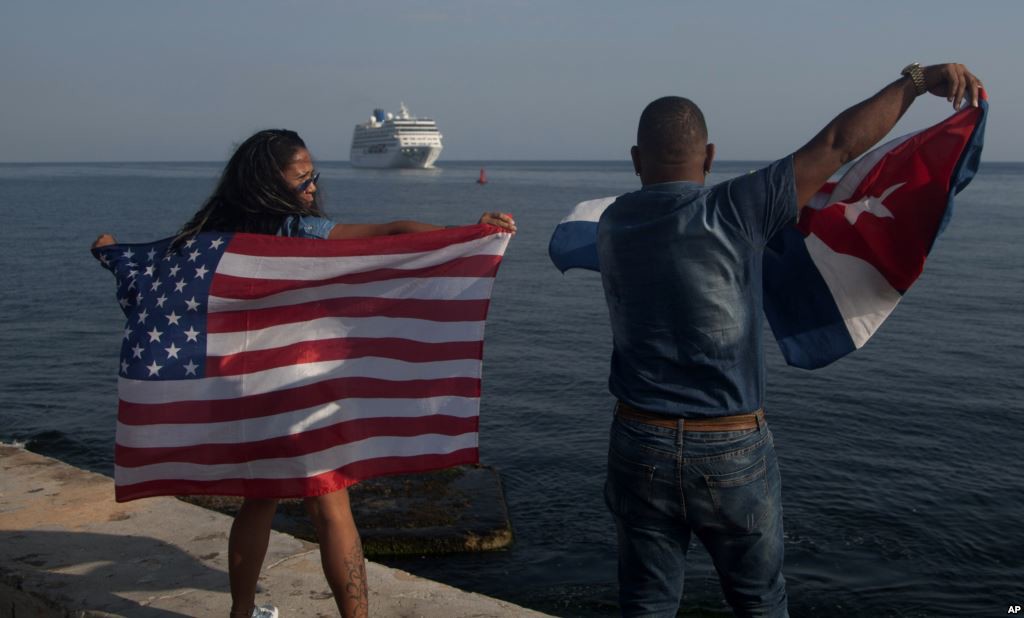 Today, the Cuban government sees cruises as an easy source of revenue that can bring thousands more American travelers without placing additional demand on the country’s maxed-out food supplies and overbooked hotels. 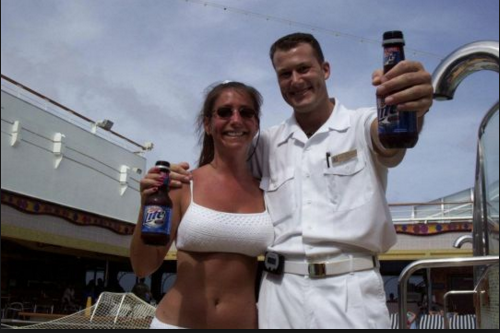 The number of Americans coming by boat has climbed since 2014, including passengers on cruise ships registered in third countries and sailing from other Caribbean ports. Traffic remains low, however, for a major tourist attraction only 90 miles (145 kilometers) from Florida.

Cruise traffic is key to the government’s re-engineering of the industrial Port of Havana as a tourist attraction. After decades of treating the more than 500-year-old harbor as a receptacle for industrial waste, the government is moving container traffic to the Port of Mariel west of the city, tearing out abandoned buildings and slowly renovating decrepit warehouses as breweries and museums connected by waterfront promenades. 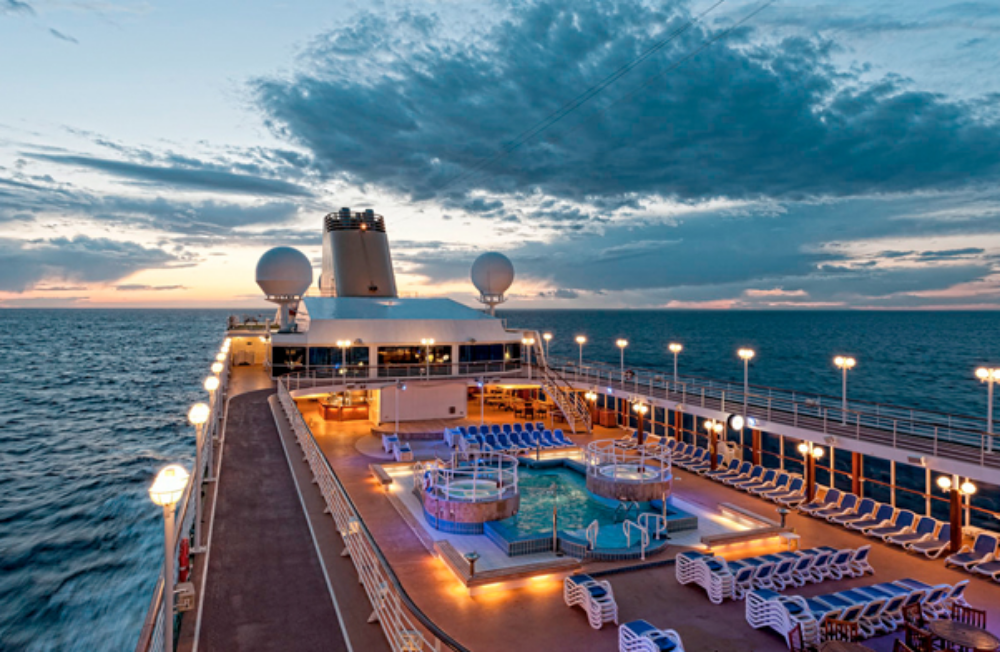 his is the real Cuba, up close and personal. The one that, until now, you’ve only seen in photographs. Travel by ship to the historic ports of Havana, Cienfuegos, and Santiago de Cuba and experience the sights, sounds, and tastes of everyday Cuban life while enjoying all the amenities of a modern hotel:

While on board, your Cuban cultural experience will travel with you, helping you to deepen your connection to the country and its people. As the Adonia takes you from port to port, you’ll have the opportunity to practice your Spanish, take part in interactive workshops and discussions, watch Cuban films, and revel in evenings of Cuban music and dance under the Caribbean sky.

Adonia, the last in a series of eight almost identical ships originally built for the defunct Renaissance Cruises in 2001, has the feel of an informal old-world British country hotel – warm, comfortable, cosseting, and friendly. P&O’s trademark buff-colored funnel balances the ship’s all-white hull and superstructure. An outside lido deck has a swimming pool and good sunbathing space. 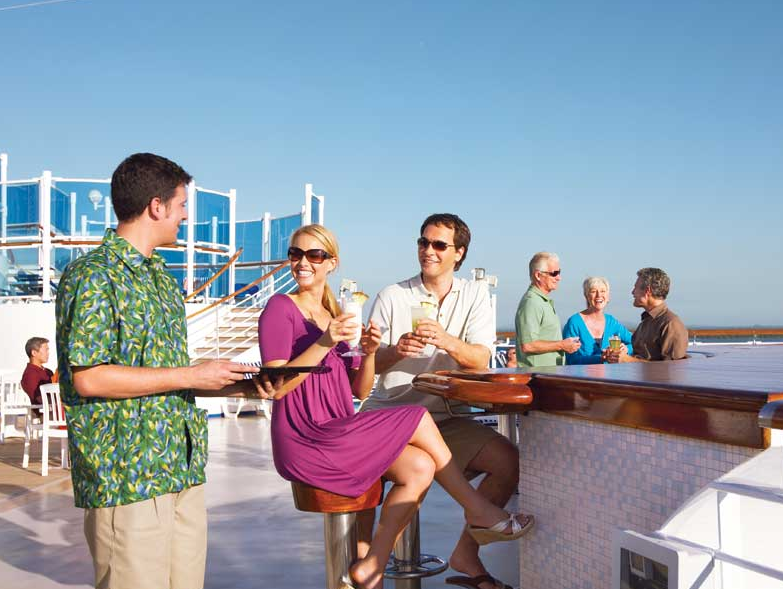 The ship is small but well proportioned. Although there is no walk-around promenade deck outdoors, there is a small jogging track above the perimeter of the swimming pool, and you can stroll on open decks on the port and starboard sides. There are no wooden decks outdoors; they are covered by a sand-colored rubberized material. 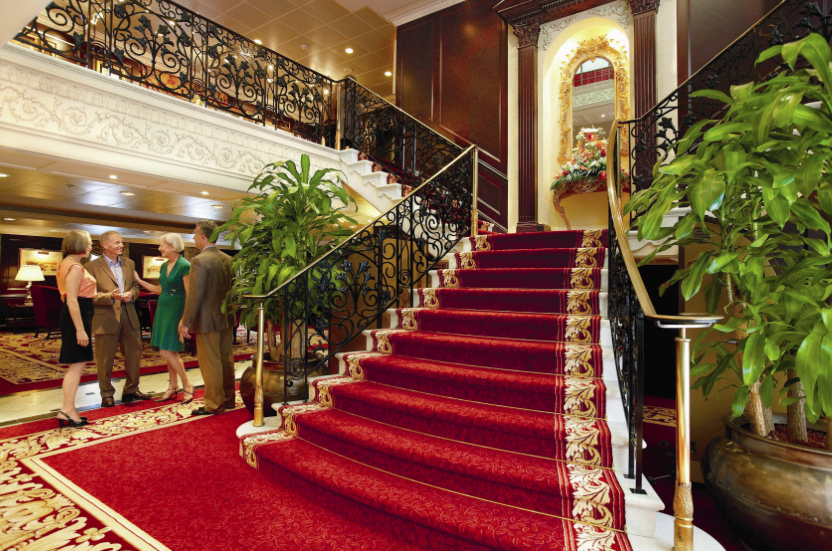 The interior decor, designed by a Scotsman, John McNeece, is quite elegant, a throwback to the heavy hardwood style of the ocean liners of the 1920s and ’30s. It includes detailed ceiling cornices, real and faux wrought-iron staircase railings, wood- and leather-paneled walls, trompe l’oeil ceilings, rich carpeting in hallways, and many other interesting and expensive-looking decorative touches.

The public rooms are basically spread over three decks. The reception hall has a staircase with intricate, real wrought-iron railings (a copy of the staircase aboard SS Titanic), but these are cleverly painted on plexiglass panels on the stairways on other decks. 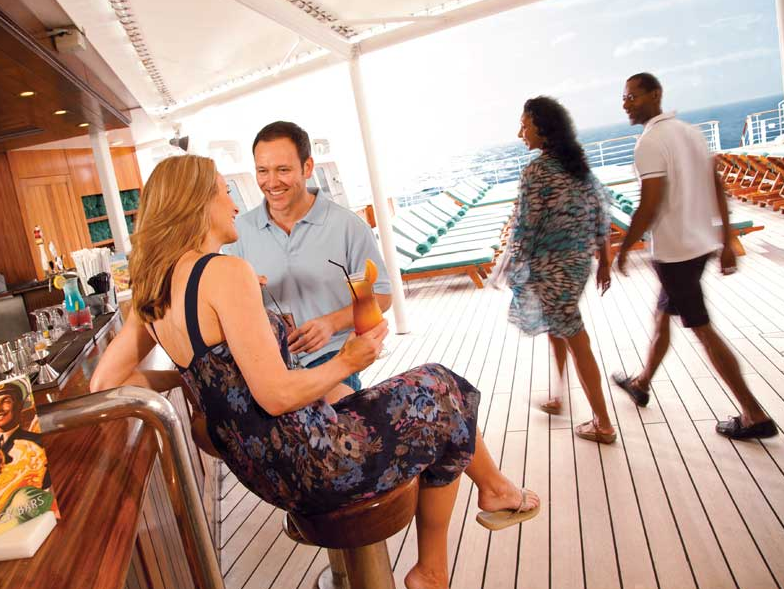 The real social hub of the ship, Raffles Lounge and Bar, is a delightful wood-paneled lounge with a fireplace, a long bar with sit-up bar stools, and the feel of a proper, traditional London club.

The Library is a beautiful, restful room – perhaps the nicest public room – designed in the Regency style. It has a fireplace, a high, indented, trompe l’oeil ceiling, and a collection of about 2,000 books, plus comfortable wingback chairs with footstools, and sofas to fall asleep on. 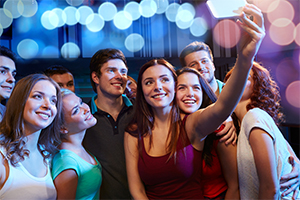 A Crow’s Nest Lounge sits high atop the ship, with great views from its floor-to-ceiling windows. The room has a long bar which faces forward – the bar staff actually have the best view – and very comfortable seating. There is a small central bandstand and wooden dance floor forward of the bar.

There are six basic cabin size categories, but in many price categories (14 for double occupancy and six for single occupancy). Some cabins have interconnecting doors, and 18 cabins on Deck 6 have lifeboat-obstructed views. All grades have tea/coffee-making facilities. There are two interior accommodation passageways. 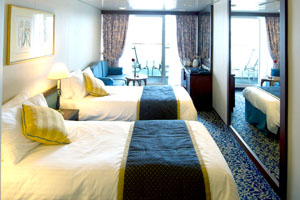 Cabins with private balcony. Cabins with private balconies – about 66 percent of all cabins – have partial, and not full, balcony partitions, sliding glass doors and, thanks to good design and layout, only 14 cabins on Deck 6 have lifeboat-obstructed views. The tiled floor, plain wall bathrooms are compact units, and include a shower stall with a removable hand-held shower unit, wall-mounted hairdryer, 100 percent cotton towels, toiletries storage shelves, and retractable clothesline. 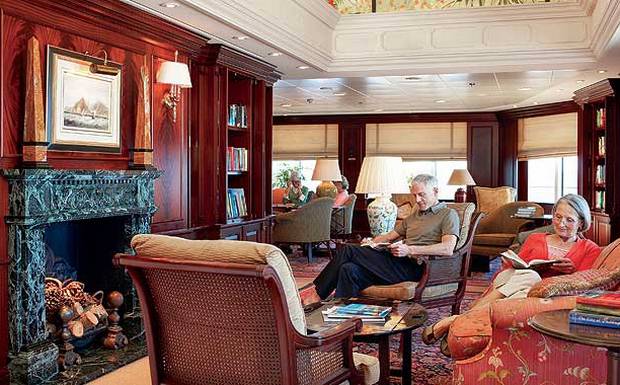 Owner’s Suites/Master Suites. The six Owner’s Suites and four Master Suites provide abundant space and are worth the extra cost. They are large living spaces located in the forward-most and aft-most sections of the ship. Particularly nice are those that overlook the stern, on Decks 6, 7, and 8. They have more extensive private balconies that really are private and cannot be overlooked by anyone on the decks above. There is an entrance foyer, living room, bedroom (the bed faces the sea), audio unit, bathroom with Jacuzzi tub, and small guest bathroom.

There are three proper restaurants, plus a casual self-serve buffet-style venue and an outdoor grill: the Pacific Restaurant, in the aft section, is the most formal, with 338 seats and a raised central section. It has large ocean-view windows on three sides, and several prime tables overlook the stern. Dining is at assigned tables, in two seatings. The menu changes daily for lunch and dinner. The noise level can be high, the result of a single-deck-height ceiling and noisy waiter stations. Adjacent to the restaurant entrance (it actually forms part of it) there’s a Club Bar – a cozy, open lounge and bar, with an attractive fireplace. The food is rather bland, and quite standardized, more suited to those of a certain age.

Ocean Grill, by Marco Pierre White, has ocean-view windows along one side and aft. The menu is small, and concentrates on steak (including a superb Casterbridge 28-day dry-aged filet steak) and seafood dishes. There is a cover charge to eat here, and reservations are needed. A second reservations-only venue, the Sorrento Restaurant, offers pleasant Italian cuisine; a cover charge applies. Both of these L-shaped venues are the same size, and have ocean-view windows along two sides and at the stern. Tables are mostly for four or six.

The Conservatory, with both indoor and outdoor seating, is the ship’s casual, self-service dining spot. It is open for breakfast, lunch, and casual theme-night dinners. The selection and quality of items presented is average so don’t expect haute cuisine.

There is also a Poolside Grill which provides casual fast food and grilled food fare. Raffles Lounge and Bar is the social hub of the ship.

The Curzon Lounge is the venue for all main entertainment events and occasional social functions. It is a single level room with a large bar set at the back – the bartender probably has the best views of the stage and acts. The entertainment consists mainly of cabaret and small group shows.

There’s also a Crow’s Nest Lounge; it sits atop the ship at the front, has good forward views and includes a dance floor and live music and lots of seating alcoves to the port and starboard sides of the room. However, from most of these seats you don’t have a view of the live band or dance floor.

The Oasis Spa has a gym with some muscle-toning equipment, a large hot tub, steam rooms for men and women (there are no saunas), several treatment rooms, and a beauty salon. A spa concession provides beauty and wellness treatments, as well as exercise classes – some of which may cost extra. Out on deck there is a small swimming pool, two hot tubs, a jogging track, a golf practice net and shuffleboard courts.