LATEST
Home > ALL POSTS > California here we come on the cruise-liner RMS Orcades from mid-century to 1972. 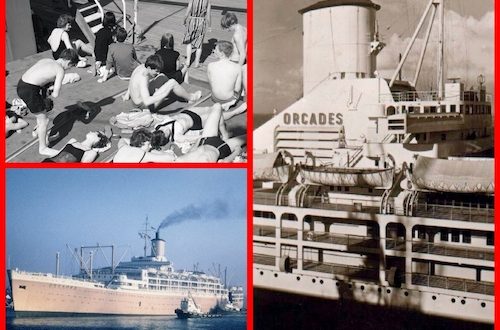 California here we come on the cruise-liner RMS Orcades from mid-century to 1972.

During her 24 years of service, the Orcades (1948 to 1972) sailed more than 2 million miles on cruises and liner voyages from the UK to Australia/New Zealand along with cruises in the South Pacific and from the West Coast of the USA and Canada (San Francisco, Los Angeles, Vancouver) to Australia, the Orient, and Europe.

Countless immigrants sailed to Australia on the Orcades and offered an “old world style of luxury” that no longer exists today. Regardless if they where in First or Tourist, or even later when she had become a One Class ship, the Orcades offered a wonderful experience.

MAIDEN VOYAGE – A WOMAN’S VIEW OF THE ORCADES

From the Sydney Sunday Morning Herald – January 11, 1949 – Correspondent who traveled onboard the Orcades.

The maiden voyage of a great passenger ship is both an exciting event and a testing time n organization and administration the experience of traveling on a new ship is therefore of special interest from a woman’s point of view. This is certainly true of the new Orient liner Orcades, which is now on the final stage of her first trip from Tilbury to Sydney.

Video highlighting the Orient Line’s ORCADES. A must see.

NEW SERVICES FOR THE ORCADES

The most obvious external change would be her external livery, for Orcades traditional Orient Lines corn hull would disappear and become the typical P&O all-white hull and superstructure with red boot topping, but thankfully the corn/yellow funnel with its black cover and “top-hat” remained!

BEGINNING OF THE END

However on April 17, 1972, during one of these cruises whilst Orcades was in Hong Kong, sadly there was a fire in her boiler room. Although this did not affect the rest of the ship, vital parts were required for her to continue.