A grand cruise that will make you part of history. 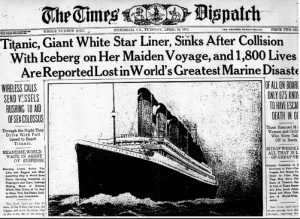 British travel firm Miles Morgan Travel are taking reservations for this unique cruise that will commemorate the Titanic’s tragic voyage in April 1912.

Our voyage of a lifetime will sail from Southampton on 8th April 2012 the twelve night cruise on board the MS Balmoral and will follow the RMS Titanic’s original itinerary, passing by Cherbourg on the French coast before calling into the Irish port of Cobh.

From here the ship will sail across the Atlantic, arriving at the Titanic site on April 14th/15th exactly 100 years on from this tragic voyage, where a memorial service will be held to pay tribute to the brave passengers and crew who perished on that fateful night.

The voyage will then continue to Halifax, Nova Scotia, the final resting place of many who were on board, before sailing on to New York, the Titanic’s ultimate planned destination. This is obviously a unique event and such is the interest in the 100th anniversary of the Titanic it is highly recommended that a booking be made as soon as possible.

A cruise to mark the centenary of the sinking of the Titanic in April 2012 has almost sold out 20 months before its departure date.

Hundreds of people from 24 different countries have booked to travel on the Balmoral, due to set sail from Southampton, England on 8 April 2012 and retrace the liner’s original route. Relatives of those who lost their lives on the great ship, authors, historians and people who are just fascinated by the Titanic story have already booked their place in history.

The first cruise ever to recreate the fateful voyage has attracted bookings from places including Australia, Canada, the Caribbean, England, France, Germany, Ireland, Norway, Sweden, Switzerland, South America and the USA.

Jane Allen, from Devon, said: “We’ve booked this once in a lifetime event as we wish to commemorate our relative, Mr Thomas Pears, who died on the Titanic and his story has been a big part of our lives. His widow Edith survived in Lifeboat 8.” Julie Cox, from Louisiana, USA said: “My great Grandfather had tickets for the Titanic but did not go so the Titanic has been a lifelong interest to me and my family.”

The Balmoral Cruise Liner is operated by Fred Olsen Cruise Lines, whose parent company Harland and Wolff built the Titanic in Belfast. It has been chartered for the event by ABTA-bonded Miles Morgan Travel, which specializes in cruise and luxury holidays.

A line up of ten specialist lectures are now booked for the voyage including author Arthur Cropley, the great-nephew of Charles Herber Lightoller, the 2nd Officer of the Titanic and Senan Molony, political editor of the Irish Daily Mail and author of several respected books about the disaster.

Other speakers include Philip Littlejohn, grandson of Titanic survivor Alexander James Littlejohn and the only Titanic relative to have made the dive to the wreck site. “I am delighted to be part of the cruise to commemorate the 100th anniversary of the maiden voyage of the Titanic. I’m sure my grandfather, a 1st Class Steward on RMS Titanic, would be proud to know his story will be shared with the passengers on the Balmoral. It will be an emotional moment when we are over the wreck site, where I dived in 2001, and where my grandfather left Titanic rowing Lifeboat 13.” Miles Morgan, managing director of the Titanic Memorial Cruise, said: “The 100th anniversary is such a significant milestone in the history of the Titanic, it has really captured the imagination of people all over the world. We’ve heard stories from guests who are having dresses created by top designers especially for the event and requests from musicians who want to audition to be part of the famous string quartet.”

Organizers of the cruise are ensuring that the food on board will be based on the dishes served in April 1912 and the music and entertainment will reflect the era.

The last remaining twin cabins are available from £3,350 per person and go up to £5,995 for a superior suite for the 12-night cruise including flights back to the UK from New York.

The ship will sail with 1,309 paying passengers, exactly the same number that sailed on the Titanic.

There are still cabins available on the cruise, check here.