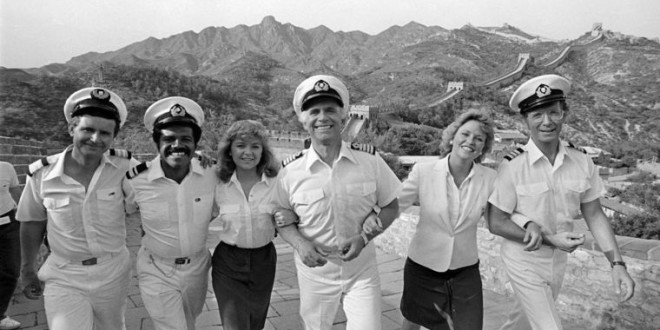 Fred Grandy (left) followed his tour of duty on “The Love Boat” by going into politics. He and cast members walk hand in hand, May 30, 1983, at the Great Wall near Beijing, China. From left to right: Grandy, Ted Lange, Jill Whalen, Gavin MacLeod, Lauren Tewes and Bernie Kopell. (AP Photo/Liu Heung Shing)

The SS Princess Patricia was the first “Love Boat”! Last week Princess Cruises announced that it was scheduling the Pacific Princess (above) for a 14-night 50th Anniversary cruise from Los Angeles to the Mexican Riviera on December 3, 2015, fifty years to the day after the chartered Princess Patricia (top) departed on her first voyage for the new line. Princess Patricia docked in Vancouver, BC, Canada. These were the original colors during the period Stanley McDonald charted the night boat from CPR. The two stacks were later changed to the red colors seen in the photos above.