5 Star Rating from Cruising The Past: Crystal Cruises maintains the great glamor, first class standards and excitement of ocean travel.   When getting there was half the fun.   Crystal Cruises carries on the elegant tradition of the NYK Lines.  The famous Japanese company had a worldwide fleet of the finest ocean liners.  During the 1920s and 1930s they provided top first class service. 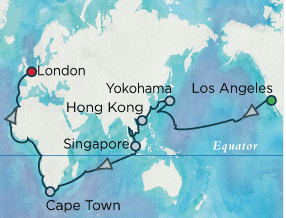 Crystal Cruises’ 2014 World Cruise Sails from Los Angeles to London on January 18th… aboard the award-winning Crystal Serenity. Five “segment” voyages combine for 89 days of intimate discovery, visiting some of the world’s most popular cities, with numerous overnights in port, from Asia to Africa. This video follows the ship’s itinerary, showcasing the incredible destinations along the way.

Crystal Cruises Inc., a wholly owned subsidiary of NYK Line,  currently has two large, luxury-class cruise ships, Crystal Symphony and Crystal Serenity. These ships are highly regarded around the world, and the company has won the prestigious Travel & Leisure magazine’s World’s Best Large-Ship Cruise Line award for 16 consecutive years, an unprecedented achievement in the industry.  Cruising The Past awards the Crystal Cruises one of the best and most reliable cruises lines operating. Carrying on the great tradition of the NYK Line. 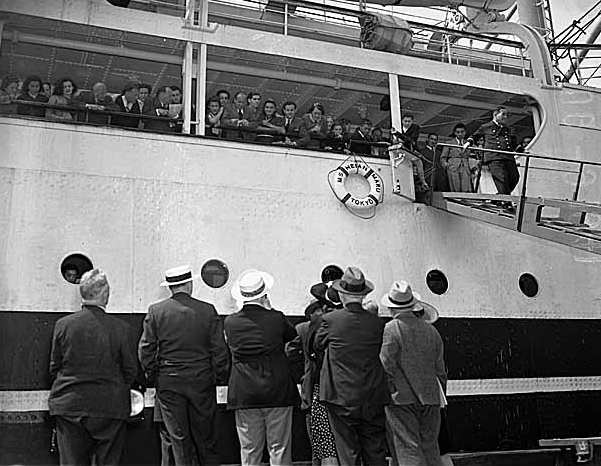 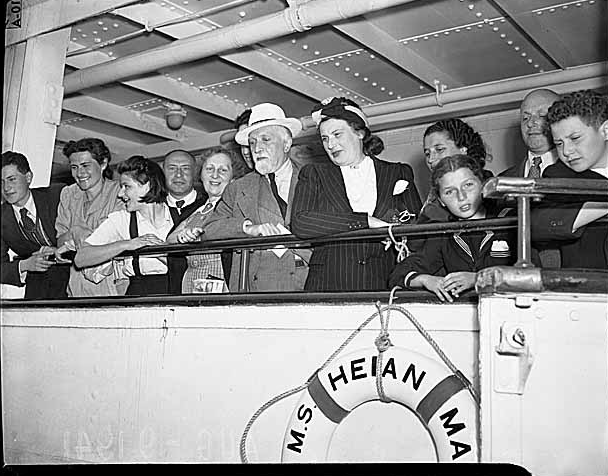 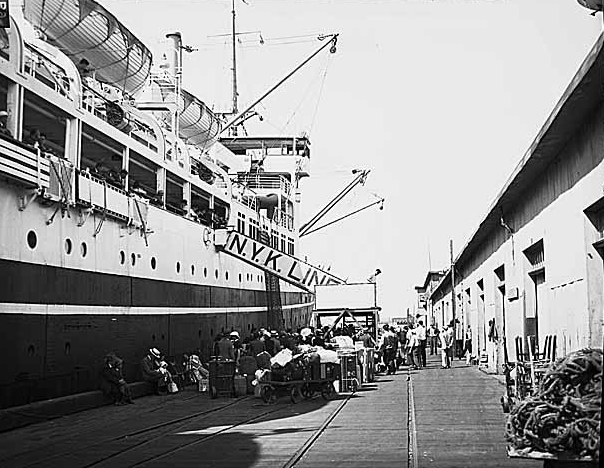 Passengers eagerly await debarkation from the motor ship ‘Heian Maru’ of the Nippon Yusen Kaisya Line moored at the Great Northern Dock. The ship had been delayed at sea for two days after President Roosevelt declared a freeze on all Japanese assets in the U.S on July 26, 1941. All passengers left the ship in Seattle including 13 Seattle-bound passengers and the 69 bound for Vancouver B.C. Many of the passengers were refugees from war-torn Europe. The ship left directly for Yokohama on August 4, 1941 after discharging its cargo.

A brief history of NYK Line…

Michael L. Grace is an authority on the history of NYK Line and trans-Pacific passenger services. 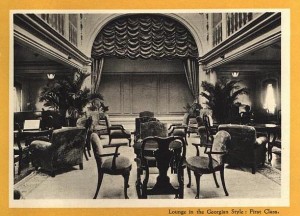 In due course, NYK Line became Japan’s national
shipping company. Their subsequent passenger ships were given government-authorized mail-carrying status and therefore the highest priorities. The affixation was similar to the designation R.M.S. (for Royal Mail Ship) used by the most prominent British liners. 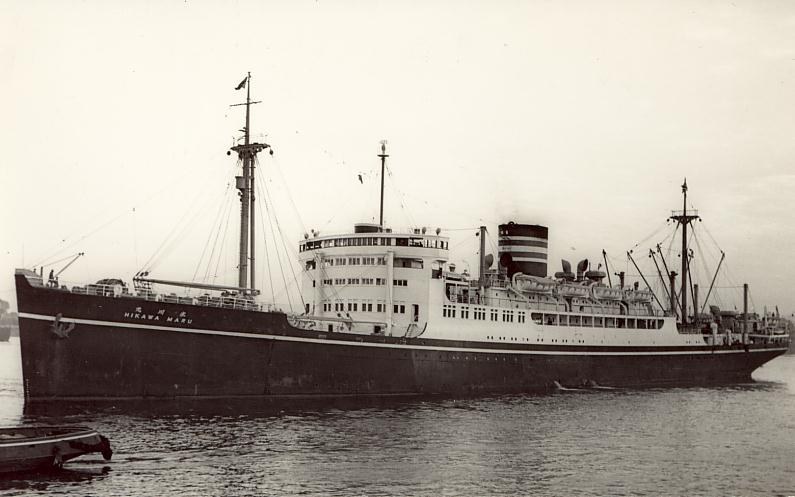 THE HIKAWA MARU was operated by the NYK Line. She was the only Japanese passenger vessel to survive WW 2. In her 30 years of service, the HIKAWA MARU crossed the pacific 254 times, carrying around 25,000 passengers and a great volume of cargo. NYK Line is now a worldwide shipping company that owns Five Star Crystal Cruises.

The Hikawa Maru sails for Honlulu and Canada during the 1950s…

Fullbright scholars sail aboard the Hikawa Maru in 1960… on one of the last runs for the Hikawa Maru before being retired.  Crystal Cruises was NYK Lines next venture into passenger travel. 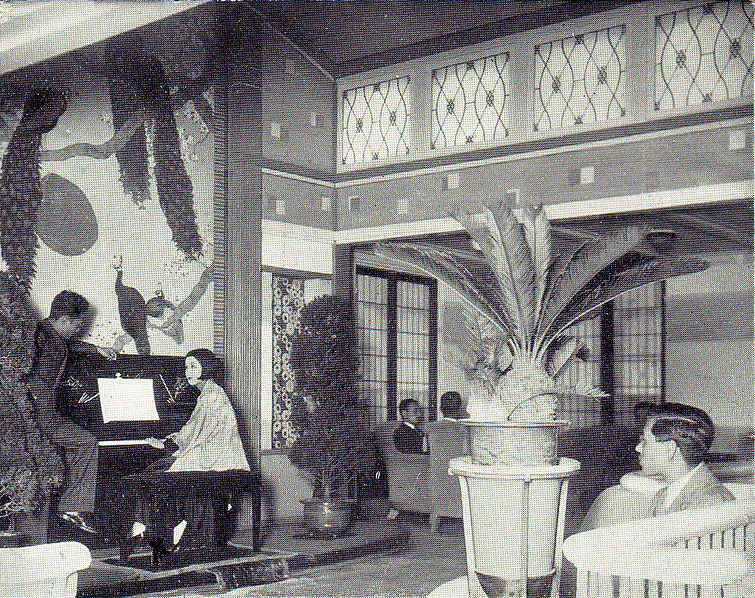 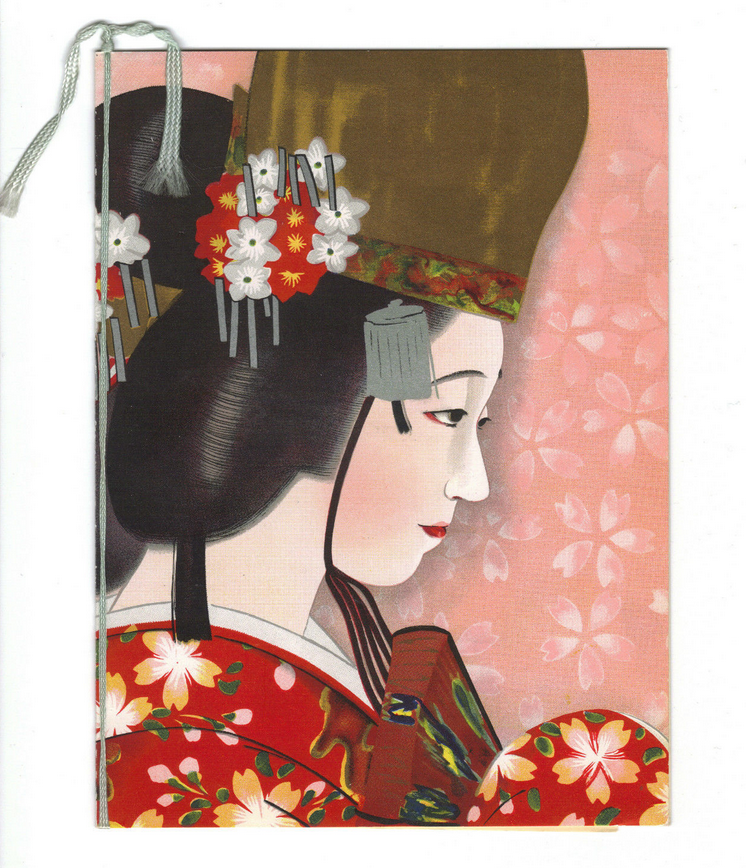 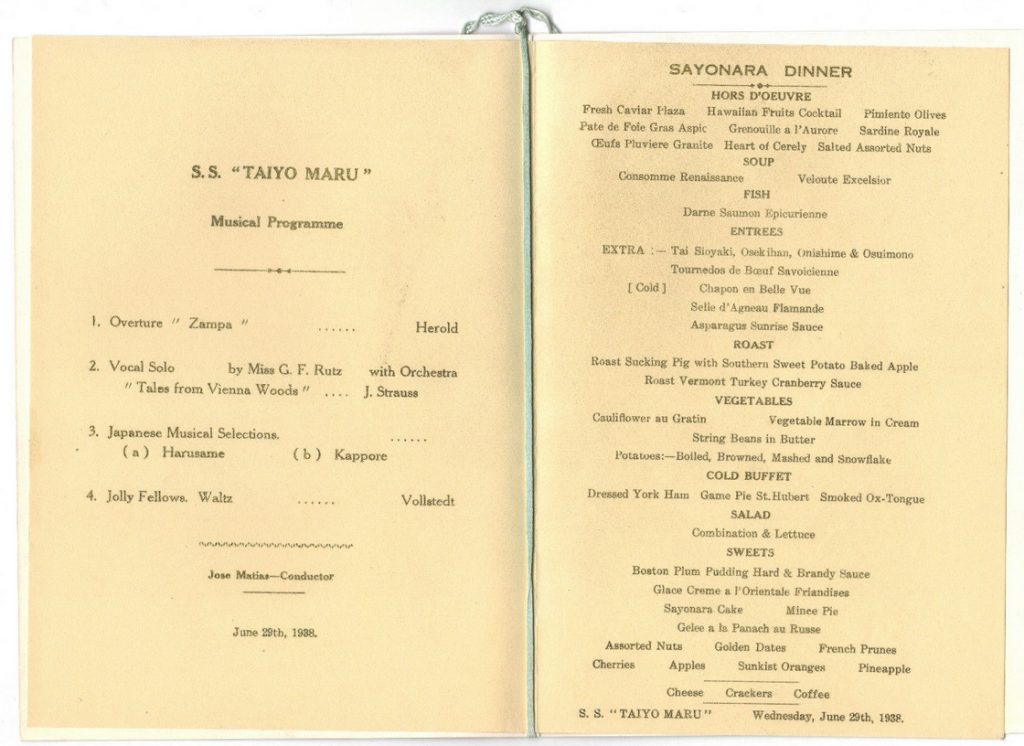 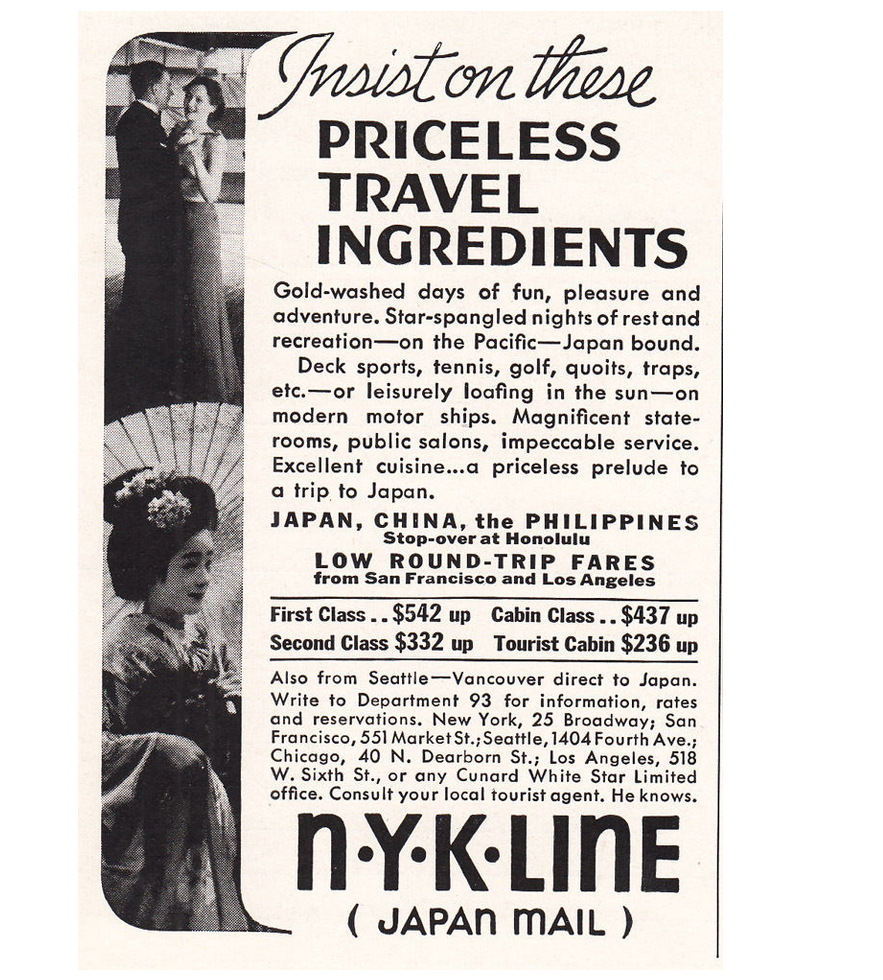 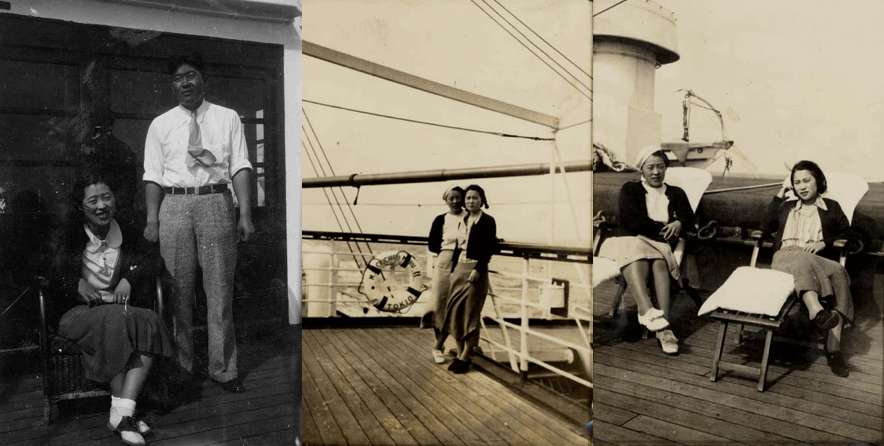 Japanese-American passengers sailing from California to Japan aboard the MS Chichibu Maru in 1935.  Many of these loyal Americans would be interned by President Roosevelt during WW2. 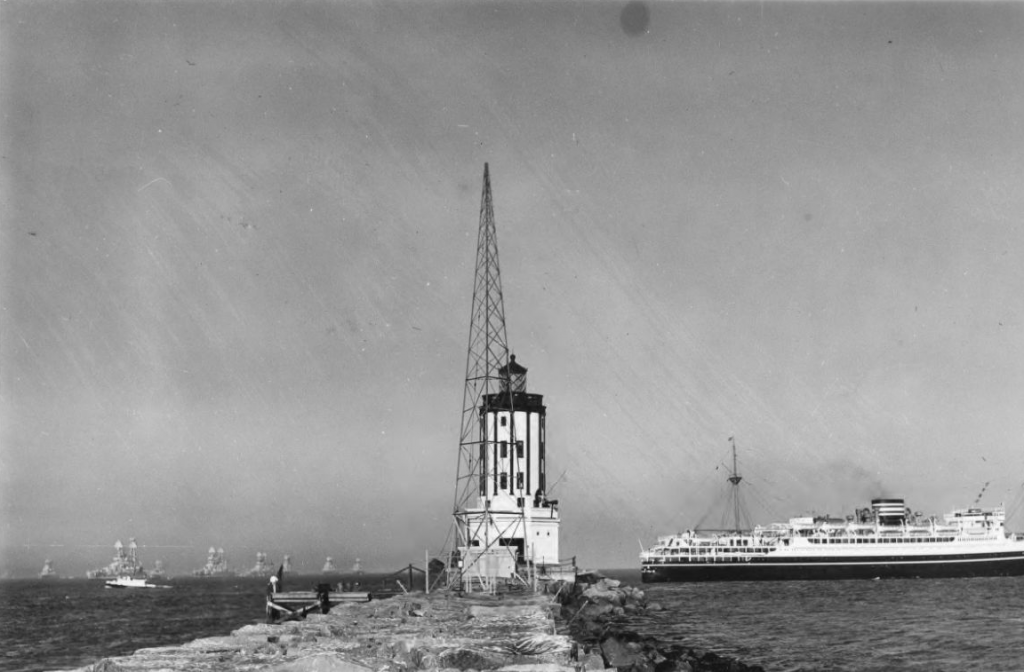 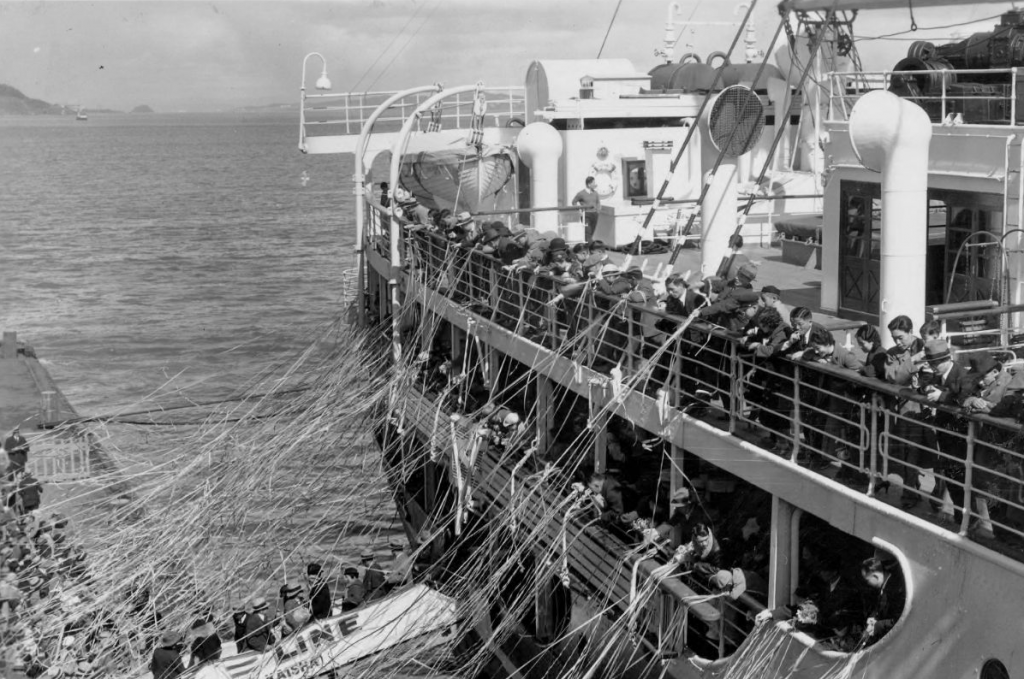 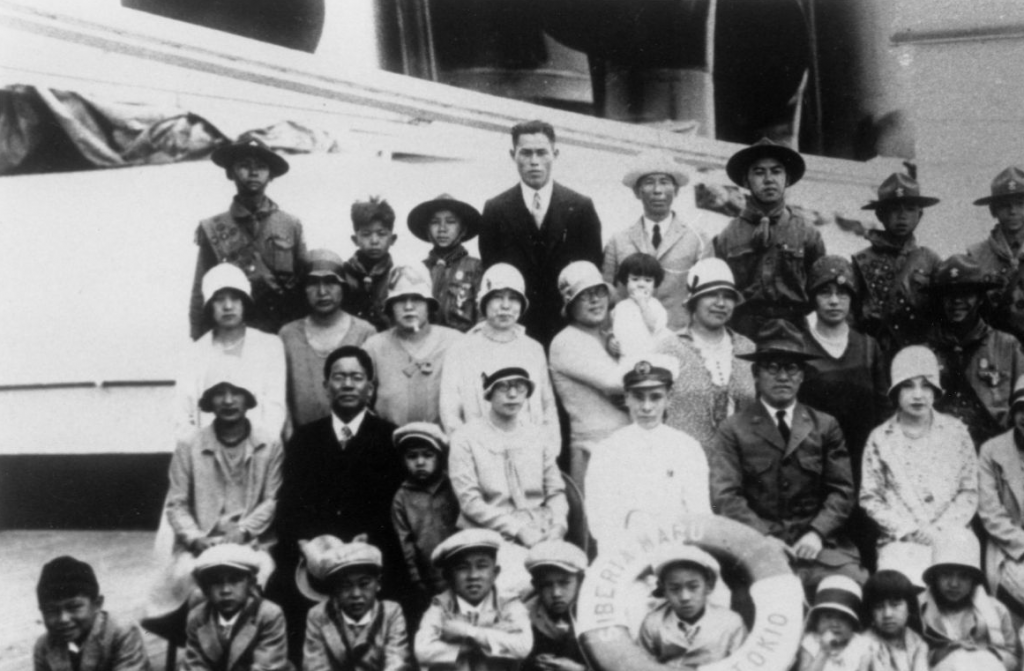 Japanese-American Boy Scout Troop 41 sailing from San Francisco to Asai aboard the MS Siberia Maru in 1929. 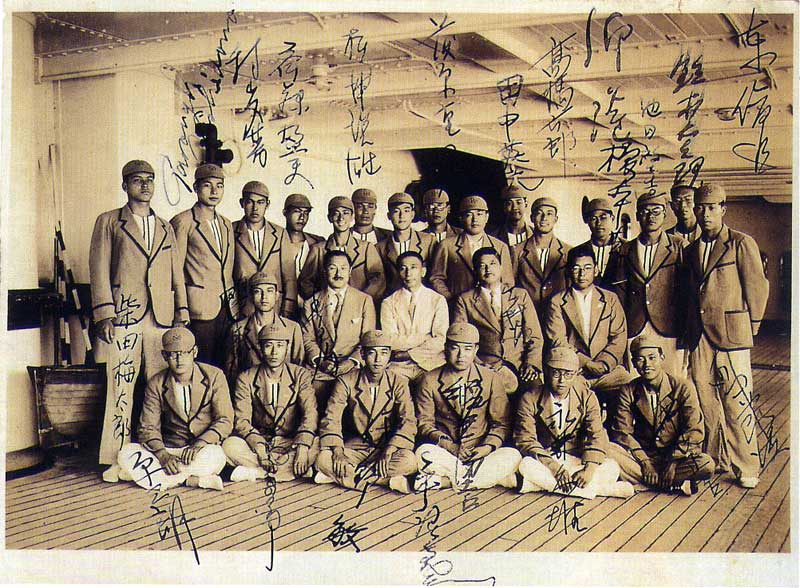 Scenes from ACROSS THE PACIFIC with Humphrey Bogart, Mary Astor and Sydney Greenstreet… 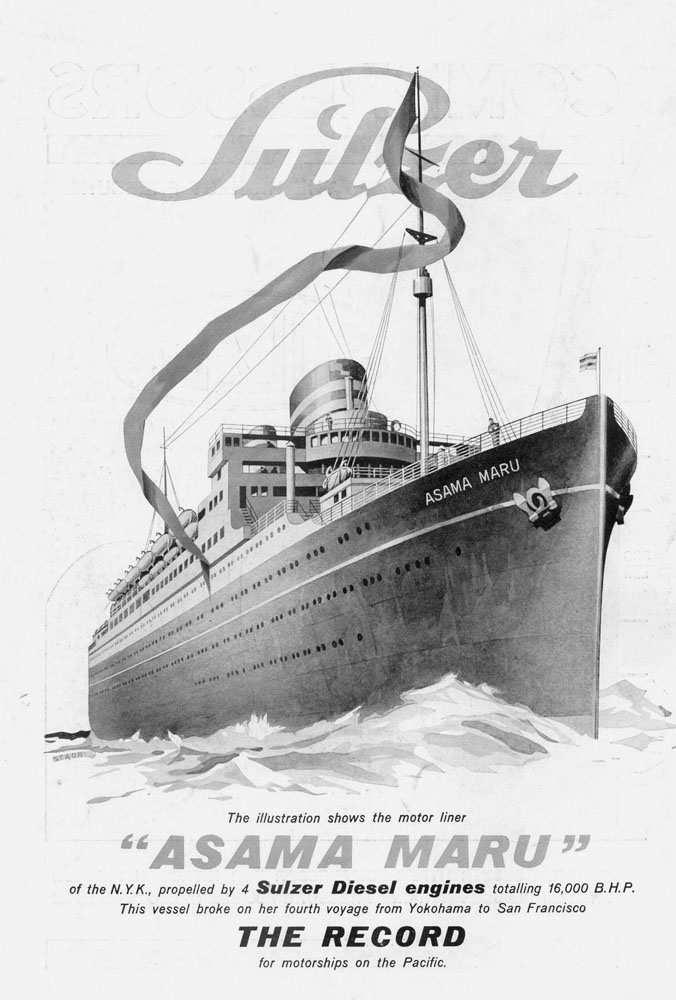 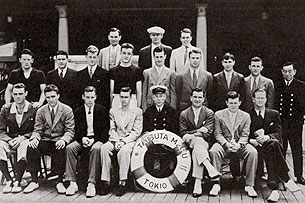 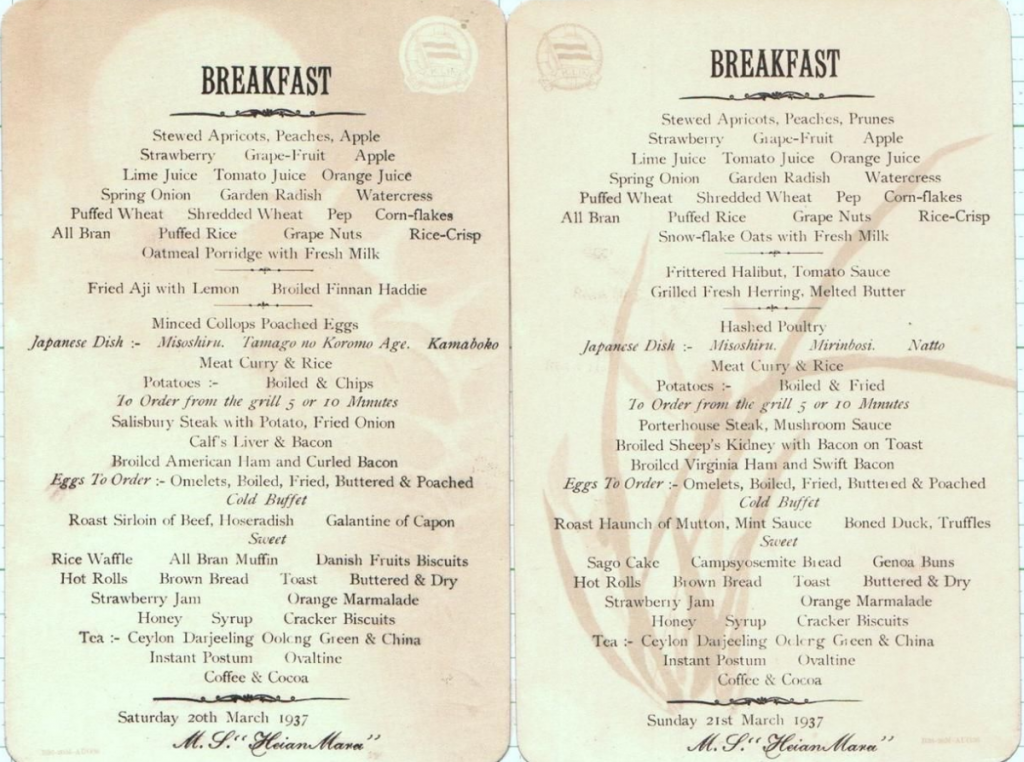 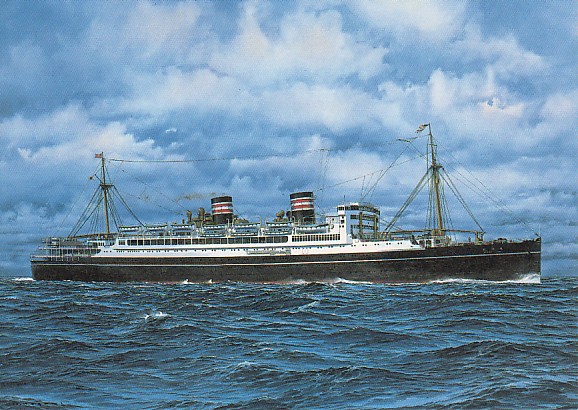 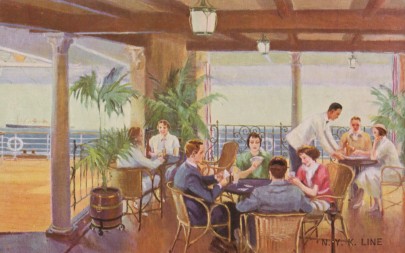 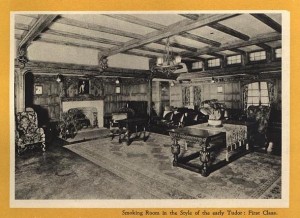 (Left: First and Second Class Accommodations aboard NYK Liners.) One of Japan’s proudest periods in passenger shipping was the 1929 building of two of the finest and most luxurious ships ever to sail the Pacific Ocean – the Asama Maru and Tatsuta Maru.

They were Japanese-designed and built, coming from the renowned Mitsubishi shipyard. At some 17,000 tons, they were then-traditional class-divided ships, and had provision for cargo as well as the 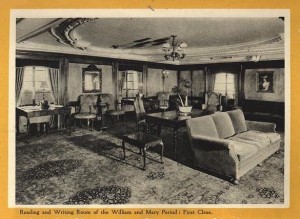 Their passenger areas were of the highest quality, much of it in traditional European style. 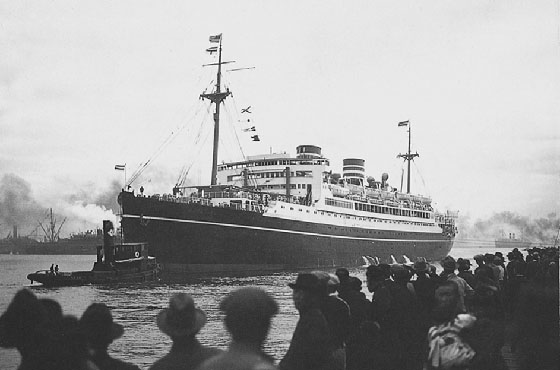 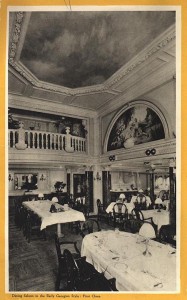 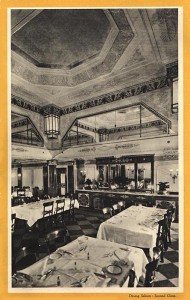 Their First Class accommodations were especially fine and attracted such notable passengers as Albert Einstein, Charlie Chaplin and his wife Paulette Goddard, Helen Keller and Efrem Zimbalist. The Asama Maru was the first to enter service in 1929. She soon set record for fastest crossing of Pacific on Yokohama-San Francisco route. 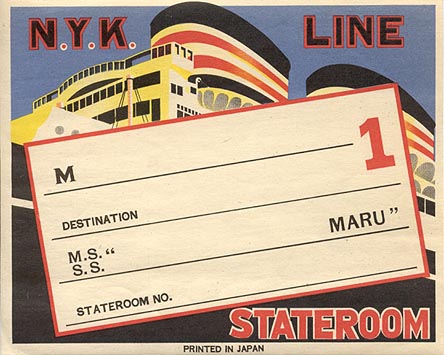 The Tatsuta Maru entered service in 1930. One of the notablemoments in her career was in 1936 when she became the first merchant ship to pass under the bridge (length of the main structure, 6.8 km; width, 19.8 m), linking San Francisco and Oakland. Ceremonies of the opening were held at 11:10 a.m. on the 12th November 1936, on the Oakland side, and at 11:40 a.m. on the San Francisco side. 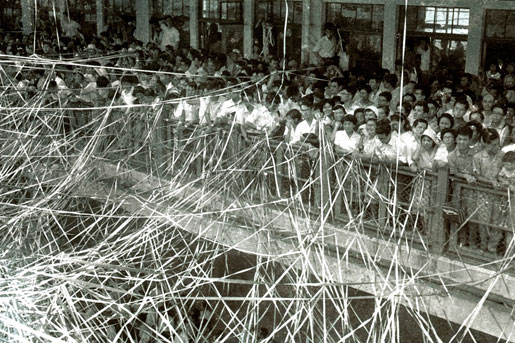 Shortly after noon the Tatsuta Maru passed under the bridge in view of the many thousands of people who had gathered to witness the opening of the bridge for traffic from vantage points on the San Francisco side of the bay.

Until the completion of the Seto-Ohashi in Shikoku, Japan, the Bay Bridge between San Francisco and Oakland had been the longest in the world. In 1937 the Asama Maru suffered a mishap when she was driven aground in Kowloon Bay during the Great Hong Kong Typhoon. After the outbreak of the Second World War both ships were requisitioned as troopships but unfortunately both were sunk and did not survive the war and it was left to the Hikawa Maru to re-establish the trans-pacific service. 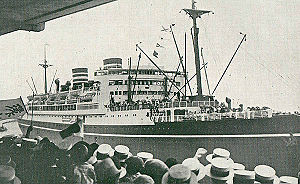 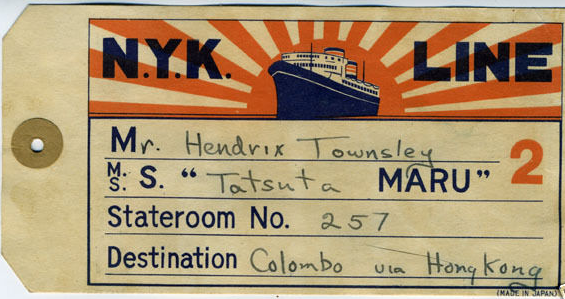 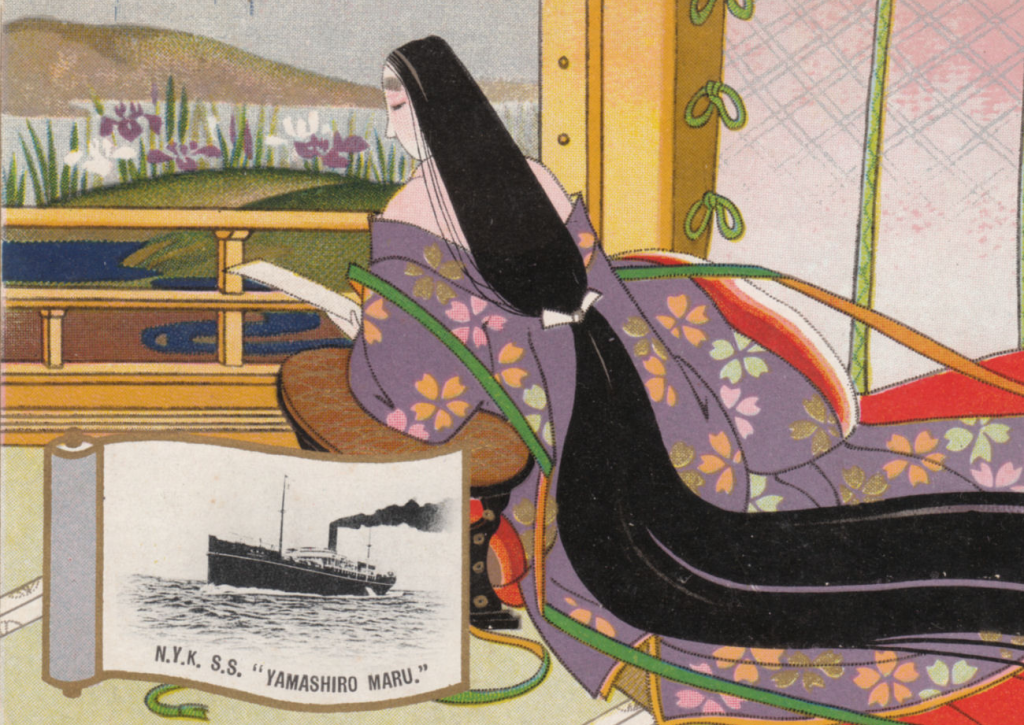